Marvel’s Winter Soldier actor Sebastian Stan is being targeted for cancellation due to his rumored girlfriend’s costume for an Asian-themed party that happened over two years ago.

Stan’s rumored girlfriend and Spanish actor Alejandra Onieva was tagged in a photo by self-described journalist Casilda Aguilera Sagarminaga. The photo, dated April 1, 2018, shows the two attending an Asian-themed costume party where it appears guests wore kimonos and other articles of clothing from Asian styles.

That translates to “What a Chinese night.” However, it can also be translated to “What an Asian night.” 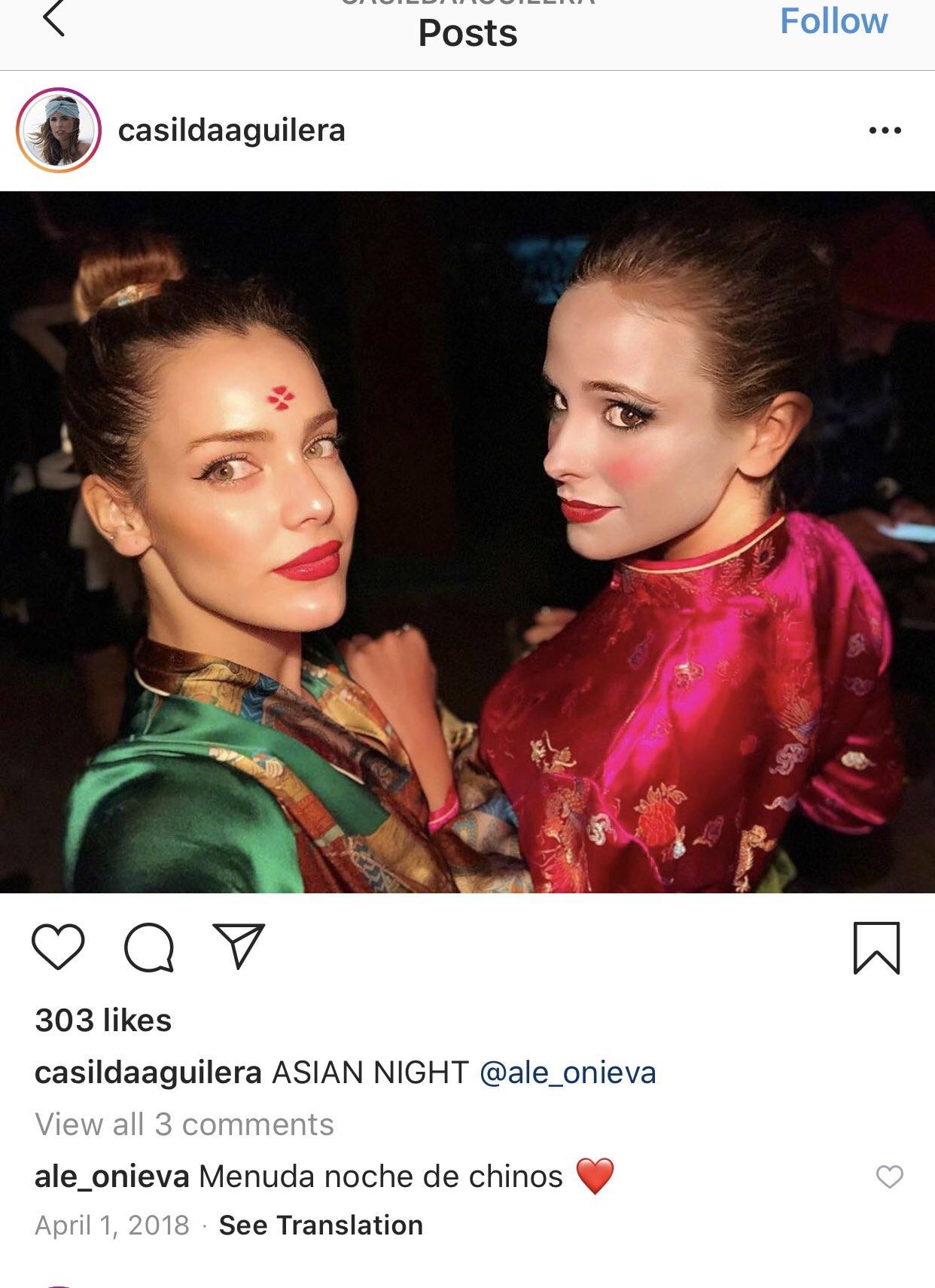 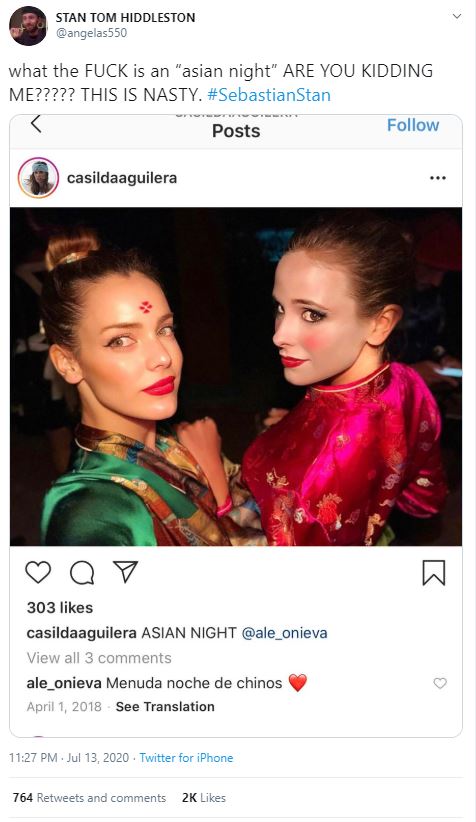 Angelas550 also claimed the post was on Onieva’s Instagram account, “for context, this is Sebastian’s PR girlfriend, dressing as a japanese geisha which EXTREMELY disrespectful and racist. not okay. this post is also on her profile and captioned “two japanese’s” and hashtagged “geishas”.”

Translated it means “Two Japanese women in the middle of the night.” 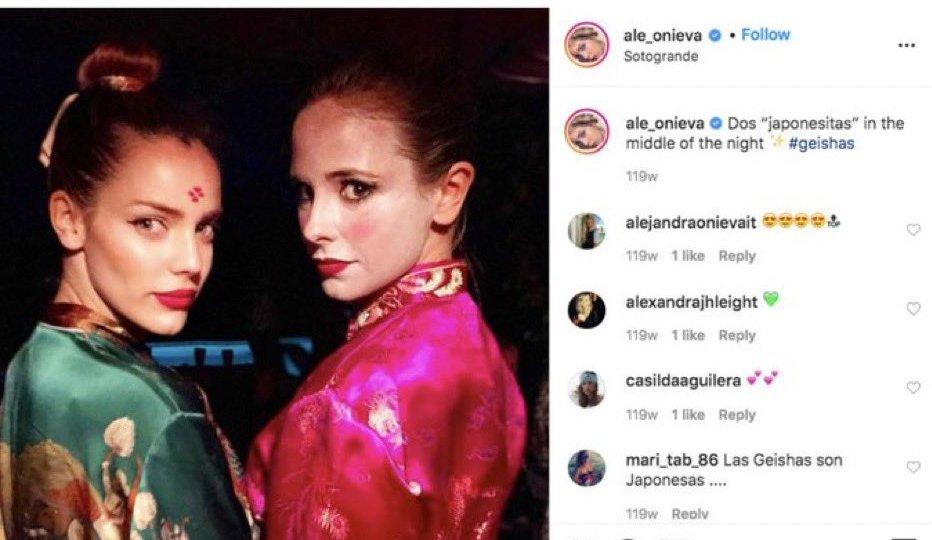 However, Angelas550 did encourage their followers to try and cancel Sebastian Stan not only for his rumored girlfriend’s costume from two years ago, but for his alleged lack of support for the Marxist and violent Black Lives Matter organization.

Angelas550 wrote, “i’m BEGGING y’all, retweet this. bring awareness to this. he was literally so late to comment on BLM and needed permission from his team to post about it. retweet this and get his teams attention so they can know they set him up with a RACIST woman” 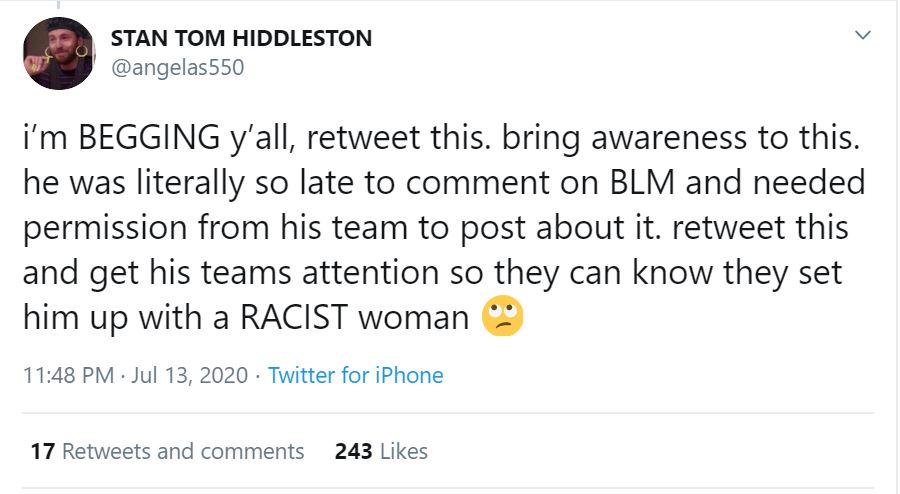 Angelas550 added, “this is the equivalent of doing BLACKFACE, posting a pic and captioning it “african american night” NOT OKAY.

The call to cancel Sebastian Stan would evolve into its own Twitter hashtag with #sebastianstanisoverparty trending on the social media platform. As of writing the hashtag has been used in over 17,000 tweets.

Many of the tweets as is now the trend on Twitter feature fan cams of various celebrities. However, there are a number of tweets attempting to cancel Sebastian Stan.

One person wrote, “stop defending seb and stop speaking over and invalidating the feelings of the asian community.” 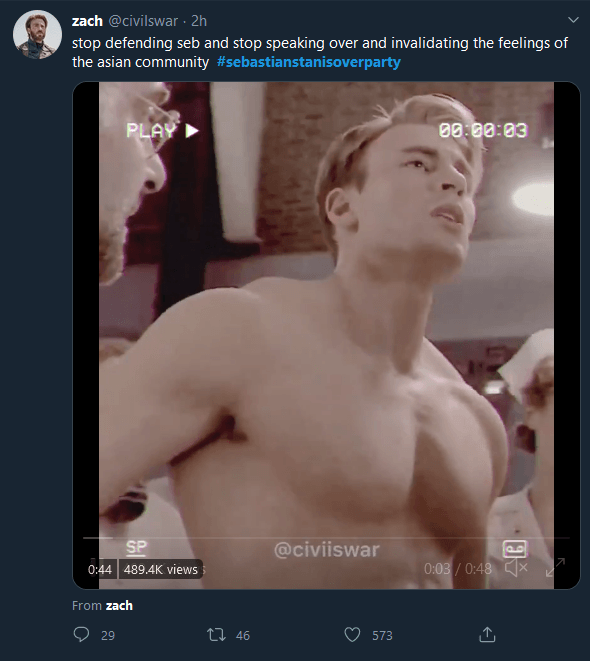 One person accused Stan of blocking individuals who are accusing his rumored girlfriend of racism. 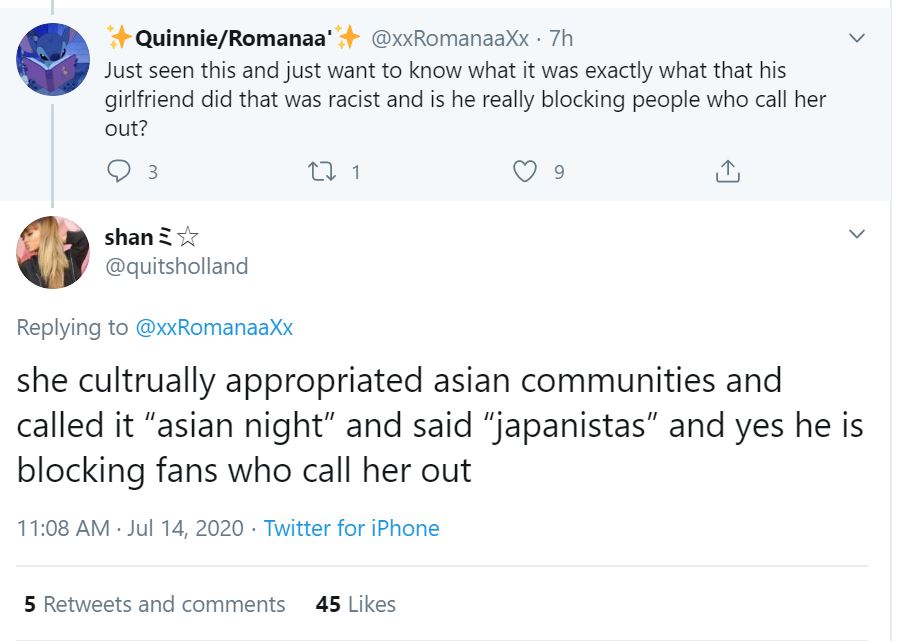 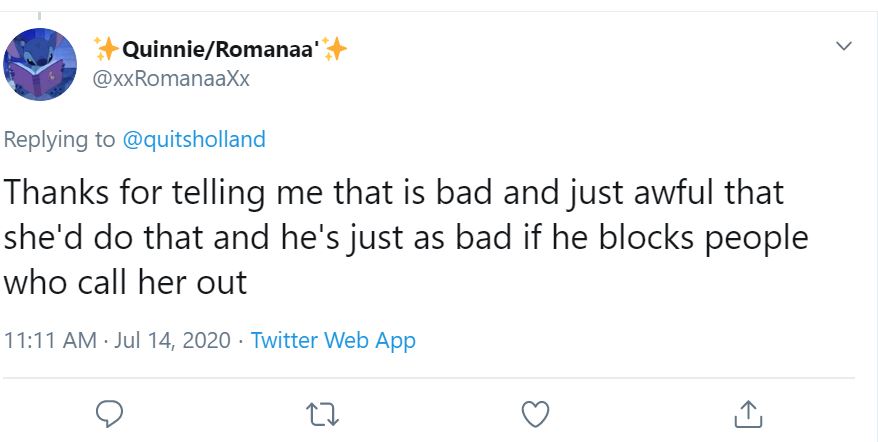 One person accused Stan Lee of being a bigot and shared a photo of him in a gi. 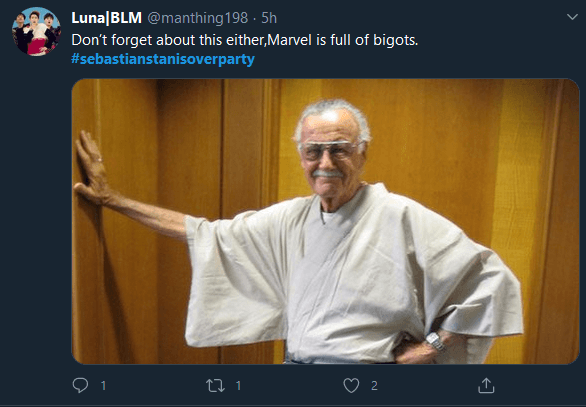 There are a bunch of people who have been calling out those who are attempting to cancel Stan. One user wrote, “This is the shit you gettin mad over? Lmfaooo, this shit stupid.”

However, this response would see one individual go after Stan saying, “he’s ignoring her racism.” 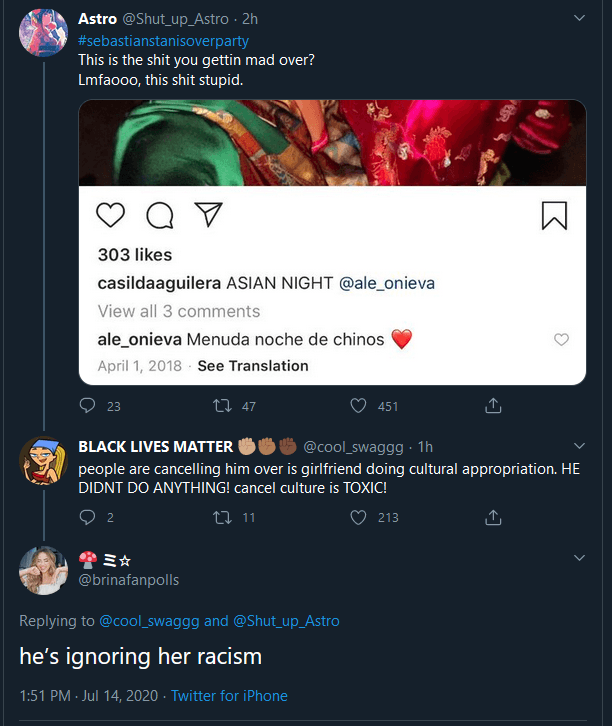 Others made their dissatisfaction with the attempt to cancel Stan known. 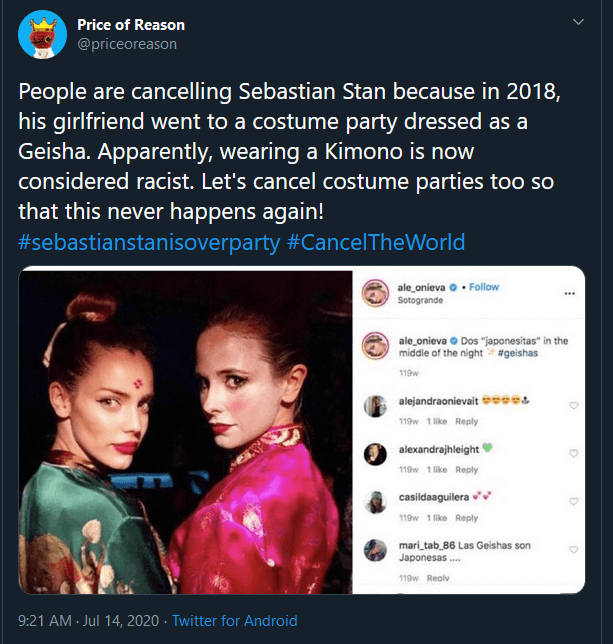 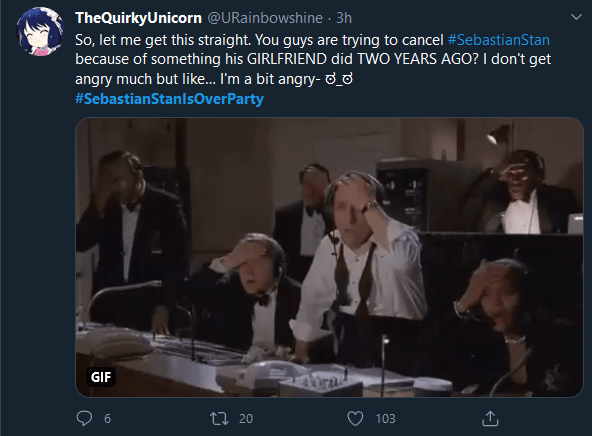 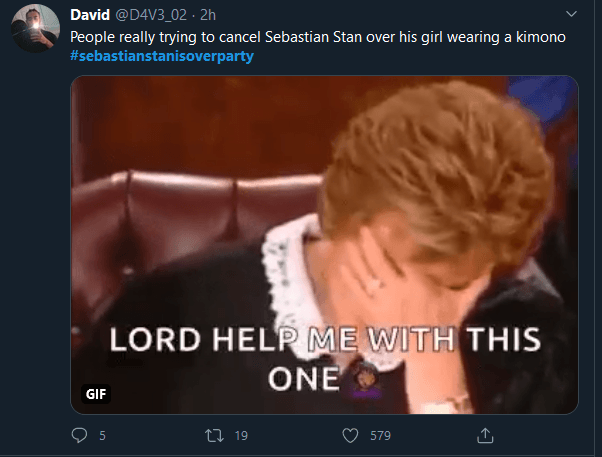 It seems as more and more people interact with the hashtag fewer and fewer people are on board with the idea of canceling Sebastian Stan.

While it might seem like this campaign to cancel Stan might go nowhere, a similar campaign has already been successful. The LA Galaxy released former player Aleksandar Katai over social media posts from his wife.

Katai’s wife posted to Instagram a video of a NYPD SUV driving into Black Lives Matter protestors. She captioned the video in Serbian, “Ma pobij govna bre!” That translates to “kill the shits.” 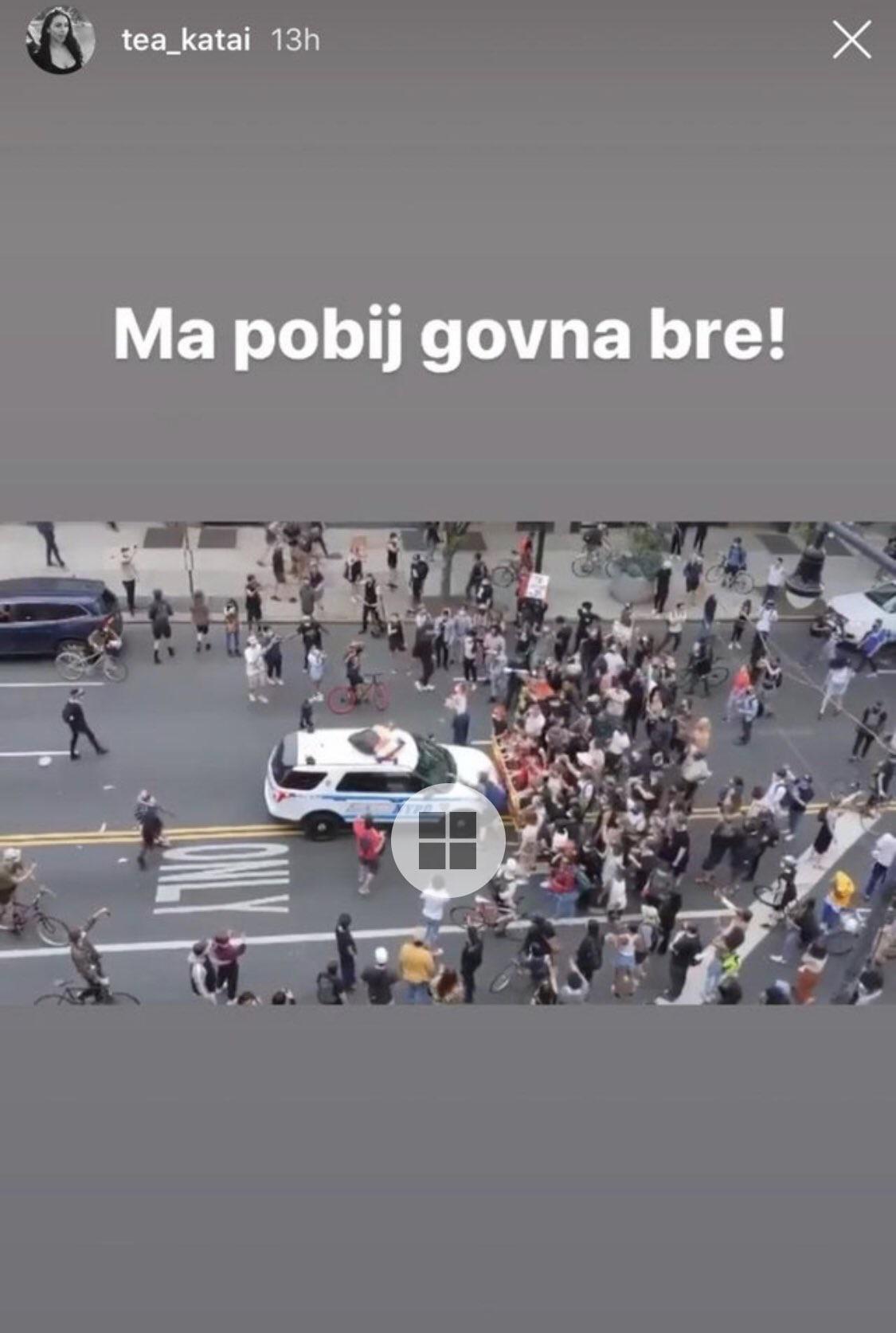 She also posted a photo of a woman looting a shoe store with a box of Nikes in her hands. She captioned that post “Black Nikes Matter.” 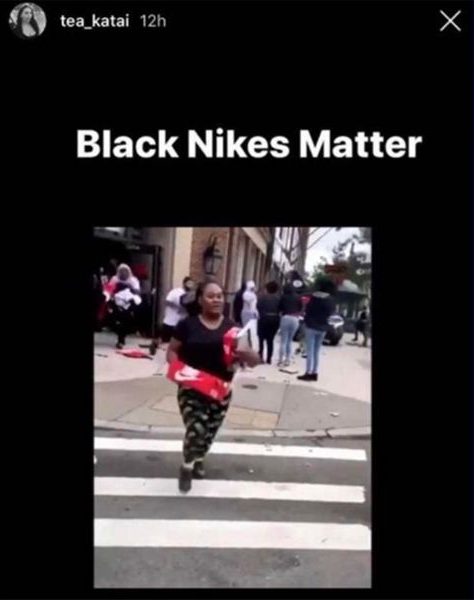 The Galaxy issued a statement to Twitter on June 3rd condemning Katai’s posts and indicating that they asked for them to be immediately removed. 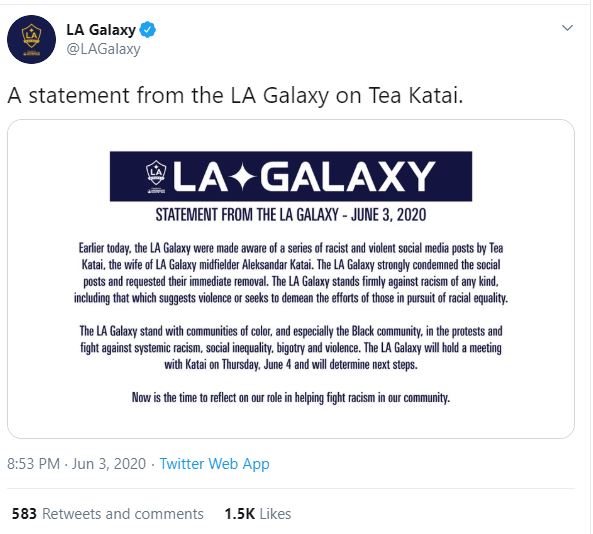 Two days later on June 5th, Fox Business reported that the LA Galaxy had come to a mutual agreement to part ways “after reaching a financial settlement.”

What do you make of this attempt to cancel Sebastian Stan? Do you think it will work? Let me know your thoughts!