In the wake of the Western backlash against the positive Japanese reception of Ghost of Tsushima, VR developer Kenji Iguchi has argued that proper Japanese localization of titles is far more important than “properly” portraying the country.

Weighing in on the West-vs-East discourse, Iguchi, who has previously worked on Facebook’s Oculus technology, drew attention to the lack of “proper JP localization” offered to Western titles released in Japan.

Iguchi argued that the Japanese “don’t care about “proper portrayals,” pointing to their tendency to “create games based on battles in Japanese history where samurais fire laser beams and you attack giant enemy crabs’ weak points for massive damage.”

It’s a reference to Sony’s 2006 E3 presentation of Genji: Days of the Blade.

Observing that poor English-to-Japanese localizations “send a clear message to JP players that you don’t really give a F about them,” Iguchi states that the process of localization is more than “just properly translating stuff” and provides a few key examples of the quality of life improvements Japanese players deserve.

He wrote, “Shoddy Japanese ingame localization (or no localization at all) is a much better way to send a clear message to JP players that you don’t really give a F about them, much more than whatever crazy depictions of Ninjas or Shoguns you stick into your game.”

Iguchi added, “To be clear, I’m referring to the localization of non-Japanese games into Japanese, btw. Too many crap EN→JP localizations abound to count. (although certainly not discounting bad l10s the other way around.)”

Finally, he concluded, “It’s not just properly translating stuff – things like choosing the correct kanji glyphs for your fonts (default OS behavior is wrong so if you didn’t explicitly fix it it’ll always be broken), using O to confirm and X to cancel in PlayStation, etc. all matter for proper JP l10n.” 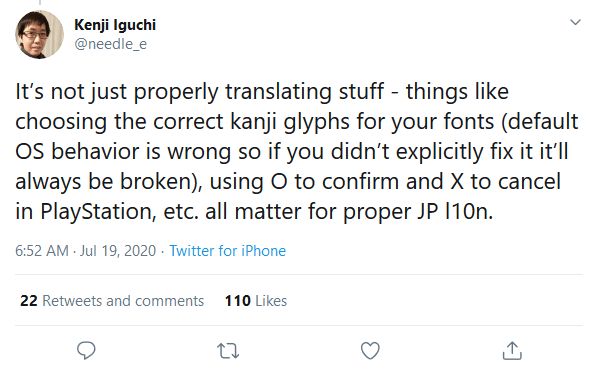 In a separate thread he would make a general statement about localizations in general in response to Twitter user Best_Lolicon.

Best_Lolicon wrote, “This is a good thread. As always good (very important) translations are paramount when releasing in other regions, bar none. I can’t stand the current trend of hack job localizations or just pure wrong translations because “I felt it was better this way so deal with it”.” 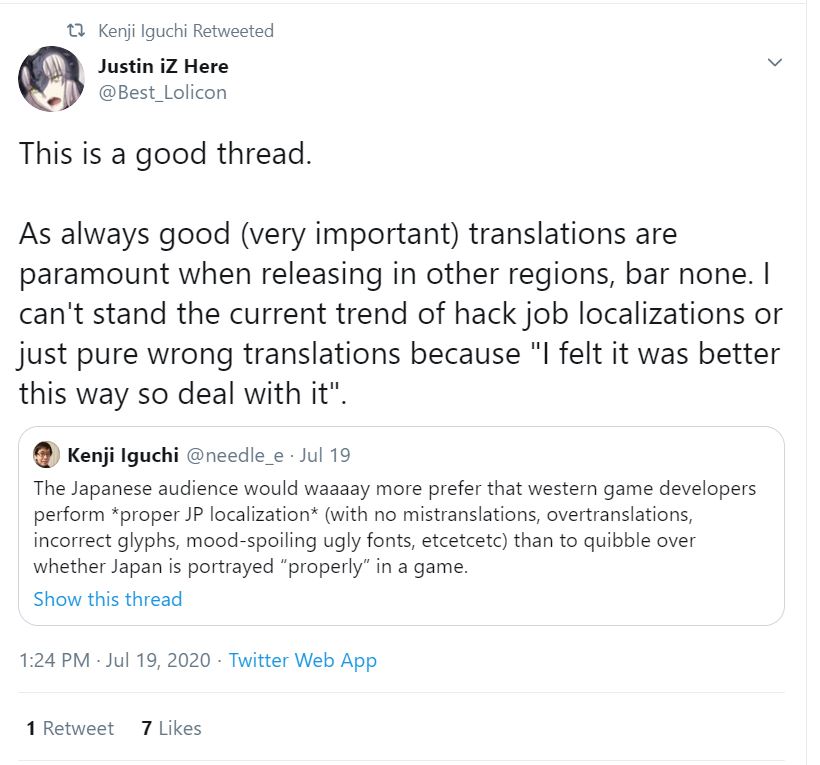 Iguchi would respond, “It’s tricky because it’s not just translations per se — many vital l10n elements require changes to the code, which will appear incorrectly if not implemented. Simply swapping out the strings file and calling it a day is not enough.” 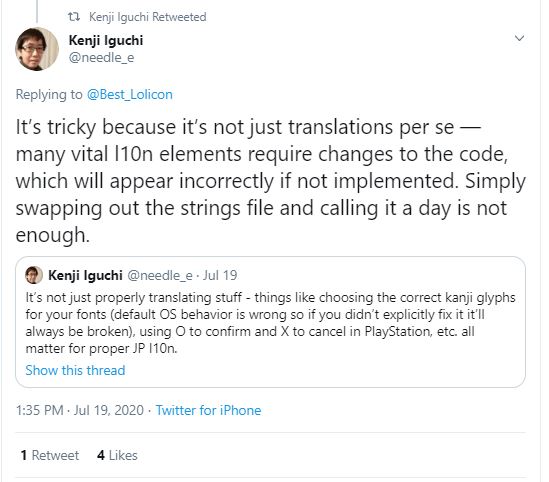 Iguchi’s sentiments echo those of Western players frustrated with the liberties taken when localizing games from Japanese-to-English.

Some titles have seen their scripts altered to reference contemporary Western sociopolitical rhetoric, as seen in the mocking of a character’s “fragile male ego” and “poor, fragile masculinity” in The House in Fata Morgana.

Others, including Catherine: Full Body, The Legend of Heroes: Trail of Cold Steel III, and Persona 5 Royal, have all seen their original scripts altered in an attempt to avoid offending Western players, while still releasing in Japan in the form intended by the original creators.