Famed Sherlock Holmes villain Moriarty is reinvented as a hero of sorts in the upcoming Moriarty the Patriot manga.

Moriarty the Patriot is based on the works of Arthur Conan Doyle and is written by Ryosuke Takeuchi with illustrations by Hiakaru Miyoshi. 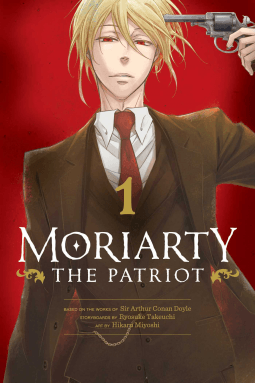 Like most Sherlock Holmes stories, the manga takes place in the 19th century when the British Empire is at the height of its power, and serves as a sort of prequel story for Moriarty before he becomes Sherlock’s nemesis.

In this story Moriarty is attempting to change the unfair class system in England that sees nobles lounging in luxury while their working class slaves toil in the factories.

Moriarty and his wealthy upper-class family adopt two lower-class orphans. But instead of living a lavish, pampered life, the two boys suffer cruelty at the hands of Moriarty’s family.

This cruelty at the hands of his family seeds a deep hatred of the nobility in Moriarty’s art.

He recruits the older of the two boys, who has a genius mind and killer instinct, to wage a war against the English nobility beginning with his own family.

While Moriraty’s goals seem noble, his methods in achieving them start to reveal the monster lurking inside of him.

The series is already getting adapted into an anime series from animation studio Production I.G.

The first volume of the series will be published by VIZ Media on October 6, 2020. The release coincides with the same week as the series’ Japanese anime premiere date.