A Grand Jury in Tyler County, Texas has indicted Netflix and charged them with the “promotion of lewd visual material depicting child” for the promotion and distribution of the film Cuties.

They were indicted under the Texas Penal Code Section 43.262 that declares “a person commits an offense if the person knowingly possesses, access with intent to view, or promotes visual material that: depicts the lewd exhibition of the genitals or pubic area of an unclothed, partially clothed, or clothed child who is younger than 18 years of age at the time the visual material was created; appeals to the prurient interest in sex; and has no serious literary, artistic, or scientific value.”

The section concludes, “It is not a defense to prosecution under this section that the depicted child consented to the creation of the visual material.”

The indictment shared to social media by Sworn Podcast host Philip Holloway reveals it was issued on September 15th. 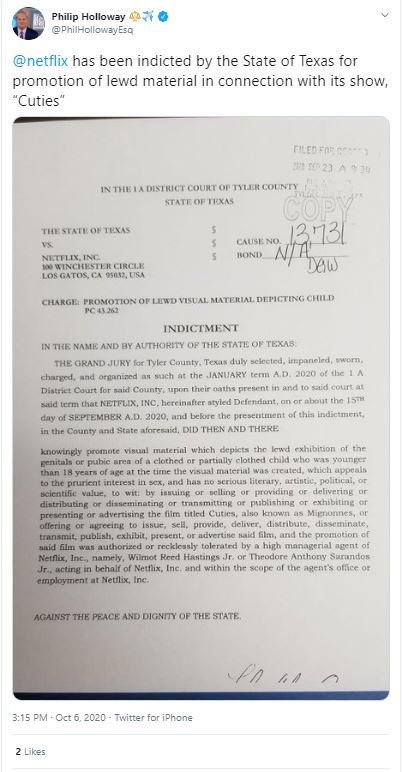 As reported by Variety, Netflix responded to the indictment stating, “Cuties’ is a social commentary against the sexualization of young children. This charge is without merit and we stand by the film.”

Bac Films CEO David Grumbach, who produced the film, previously told Variety, “It’s scandalous to accuse us of promoting child pornography.” He added, “I think the protests are coming from the right wing — from a fringe of ultra conservatism.”

The indictment comes after multiple lawmakers called for an investigation into Netflix beliving that the film may violate child exploitation laws.

He wrote on Twitter, “Following Netflix’s disturbing promotion of Cuties, I sent a letter calling on The Department of Justice to investigate whether Netflix, its executives, or the filmmakers violated any federal laws against the production and distribution of child pornography.”

You can read Cruz’s full letter below. 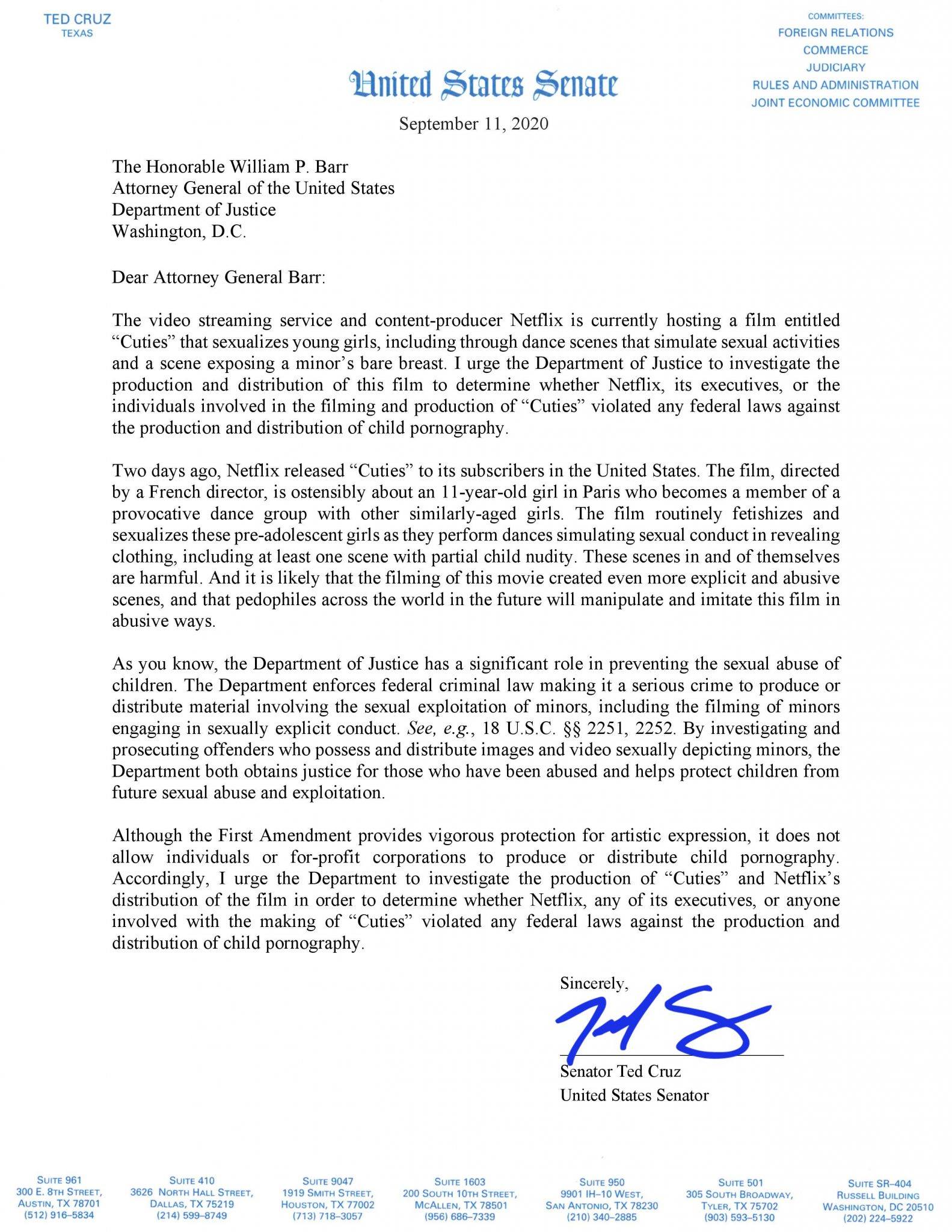 Not only has the film faced calls for investigation from elected officials, but the Parents Television Council (PTC) also called on Netflix to remove the film from their streaming service.

The PTC states, “This film could have been a powerful rebuke of popular culture that sexualizes children and robs them of their innocence. But these young actresses were sexualized in the making of this movie.”

They also claim the film’s main character “Amy takes a photo of her genital area and posts it online to prove that she’s no child.

PTC goes on to detail that “in addition to being coached and trained in highly sexualized dance routines, these girls use foul, vulgar language like “f**k,” “b***h,” and “t*ts.” They are made to wear revealing clothing.”

They describe that the film shows Amy “pulling her pants and underpants down so she can photograph her genitals. In another scene Amy attempts to seduce a grown man – a family member, no less — to get out of trouble for stealing his cell phone.”

Despite the calls for investigation and the calls for removal, Netflix produced a YouTube video with Cuties director Maïmouna Doucouré defending the film.

At the beginning of the video, Doucouré describes the film as “the story of an 11-year-old little girl who is trying to find herself. She is navigating between two models of femininity. One represents her mother’s traditional origins. And the other one is a group of young girls called cuties.”

Later in the video she stated, “The real question of Cuties is, can we, as women, truly choose who we want to be beyond the role models that are imposed upon us by society.”

She would then declare the movie a feminist film. She stated, “Cuties is a deeply feminist film with an activist message. We must all together figure out what is the best for our children. As a director, as an artist, I am doing my part with this film.”

“Politicians, the educational system, parents, children… I think all together we have to fix what’s gone wrong so we can give the most beautiful space to our girls and boys to grow up safely and become the best version of the themselves,” she continued.

Doucouré also defended the film while speaking to The Hollywood Reporter. She told the outlet, “It’s because I saw so many things and so many issues around me lived by young girls, that I decided to make this film and sound an alarm and say we need to protect our children.”

What do you make of this indictment against Netflix for the promotion and distribution of Cuties?