The Black Widow Official Movie Book recently went on sale earlier this month and includes “interviews with the cast and talent behind the cameras.” 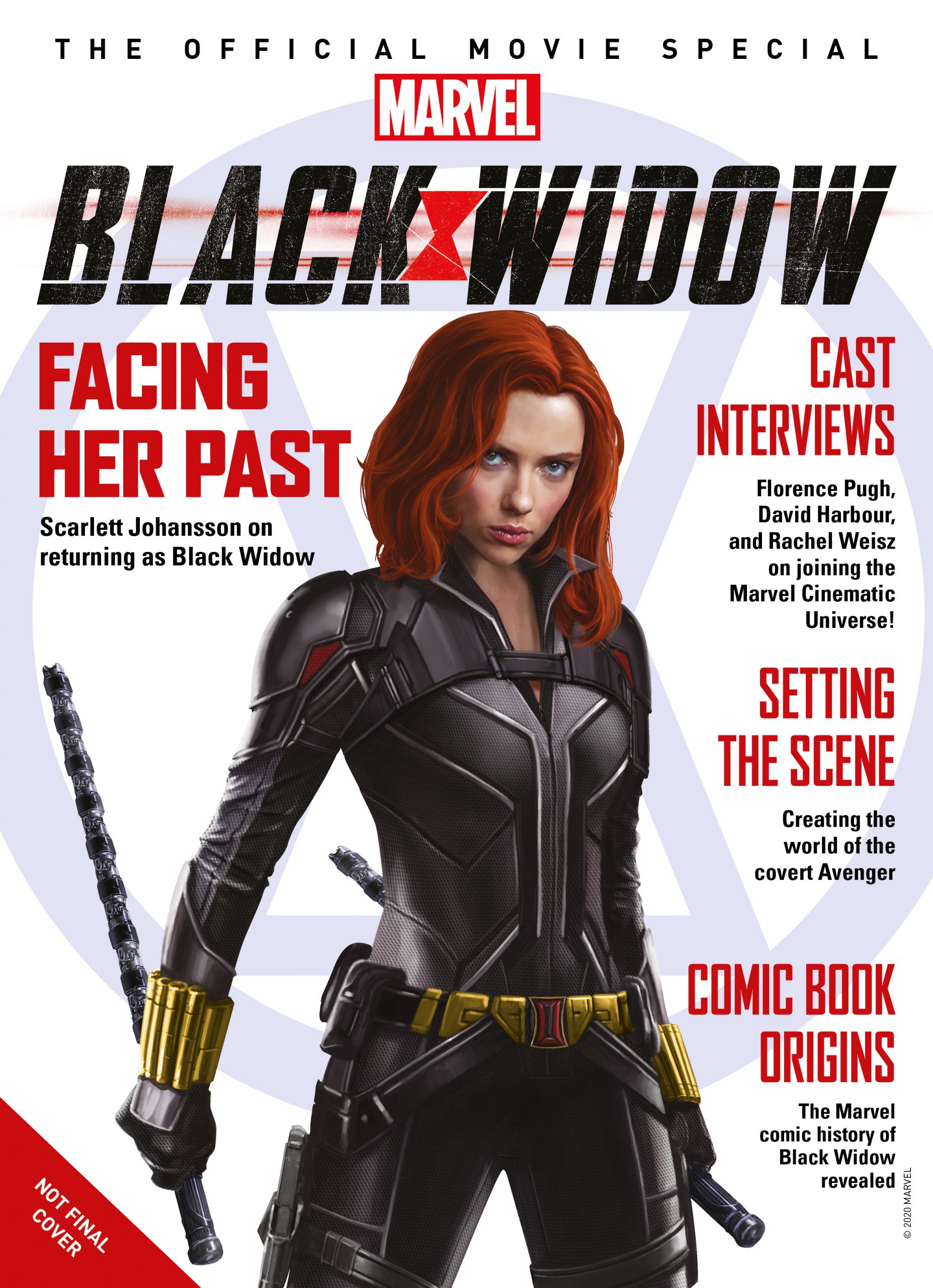 In a preview of of the hardcover book, Florence Pugh talked about her Yelena Belova character. 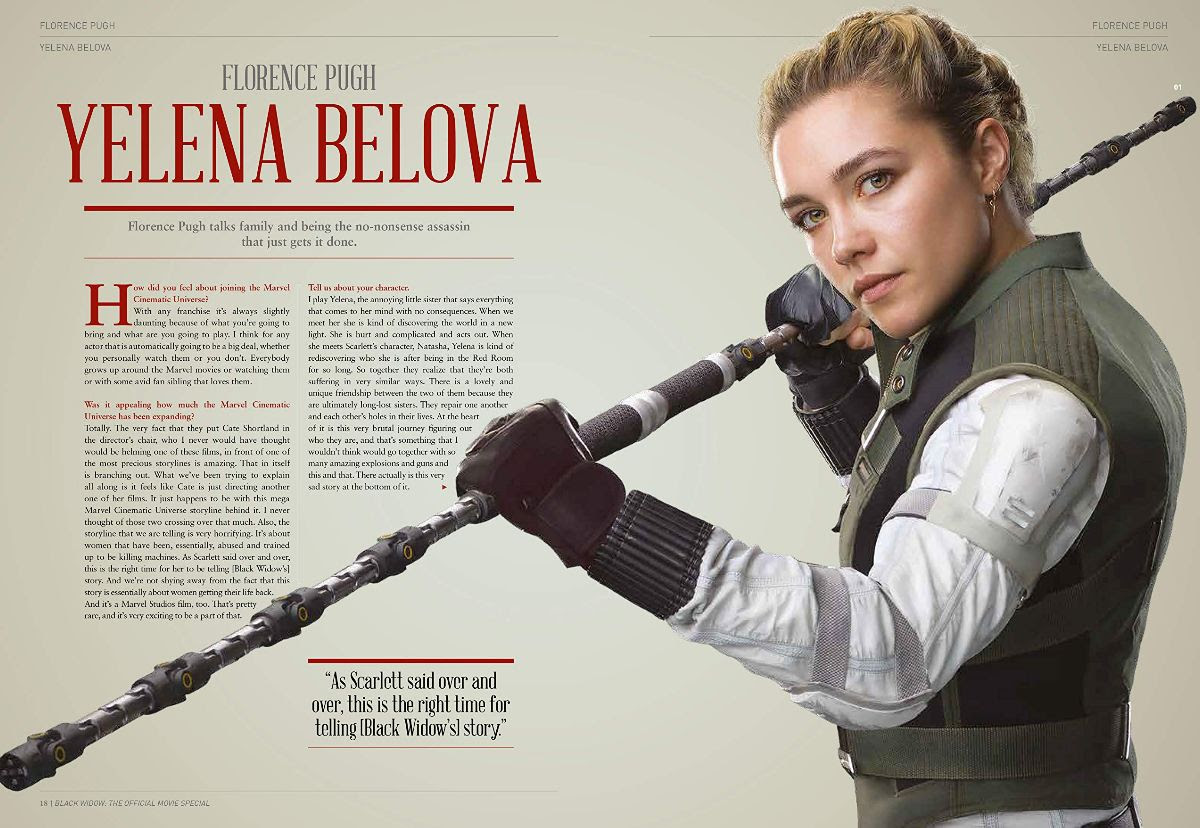 She stated, “I play Yelena, the annoying little sister that says everything that comes to her mind with no consequences. When we meet her she is kind of discovering the world in a new light. She is hurt and complicated and acts out.”

“When she meets Scarlett’s character, Natasha, Yelena is kind of rediscovering who she is after being in the Red Room for so long. So together they realize that they’re both suffering in very similar ways. There is a lovely and unique friendship between the two of them because they are ultimately long-lost sisters,” Pugh continued.

She then added, “They repair one another and each other’s holes in their lives. At the heart of it is this very brutal journey figuring out who they are, and that’s something that I wouldn’t think would go together with so many amazing explosions and guns and this and that. There actually is this very sad story at the bottom of it.” 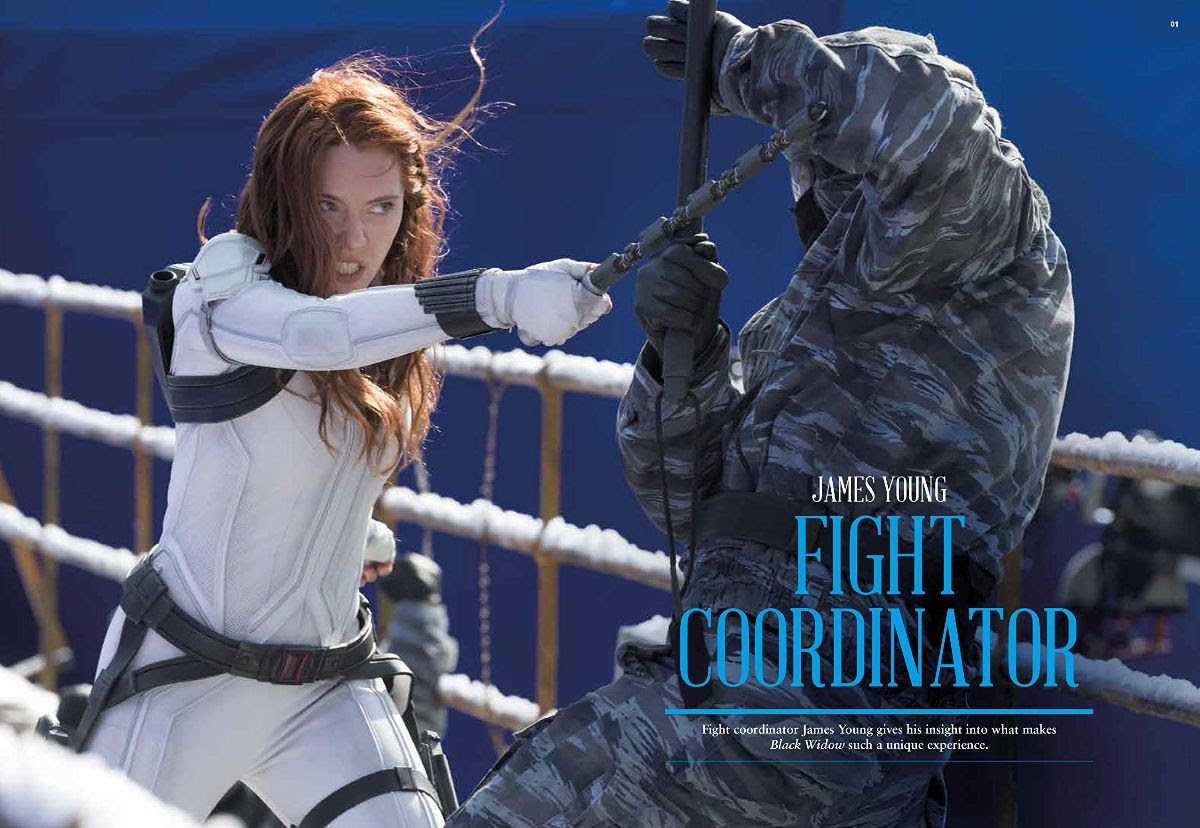 Pugh would also claim that the Black Widow film is about her and Scarlett Johansson’s characters being abused.

She stated, “Also, the storyline that we are telling is very horrifying. It’s about women that have been, essentially, abused and trained up to be killing machines.”

Pugh continued, “As Scarlett said over and over, this is the right time for her to be telling [Black Widow’s] story. And we’re not shying away from the fact that this story is essentially about women getting their life back. And it’s a Marvel Studios film, too. That’s pretty rare, and it’s very exciting to be a part of that.”

Scarlett Johansson would also discuss the film in a preview of the book. 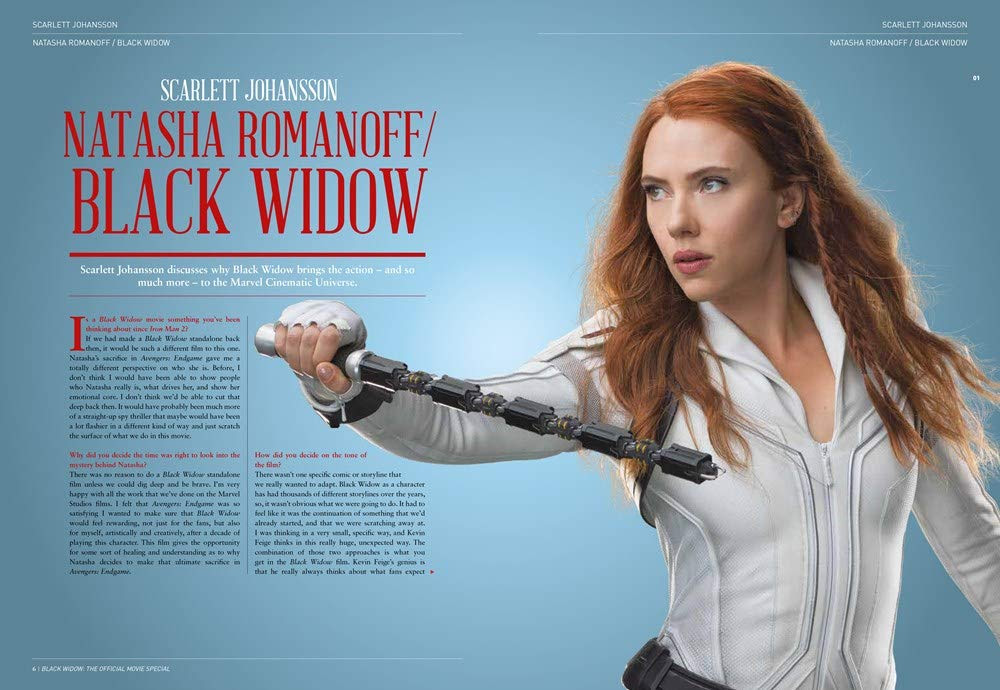 Johansson would be asked about why Marvel Studios decided to make the Black Widow movie now and whether a Black Widow film was something that she thought about since Iron Man 2.

She responded, “If we had made a Black Widow standalone back then, it would be such a different film to this one. Natasha’s sacrifice in Avengers: Endgame gave me a totally different perspective on who she is. Before, I don’t think I would have been able to show people who Natasha really is, what drives her, and show her emotional core.”

“I don’t think we’d be able to cut that deep back then. It would have probably been much more of a straight-up spy thriller that maybe would have been a lot flashier in a different kind of way and just scratch the surface of what we do in this movie,” she added. 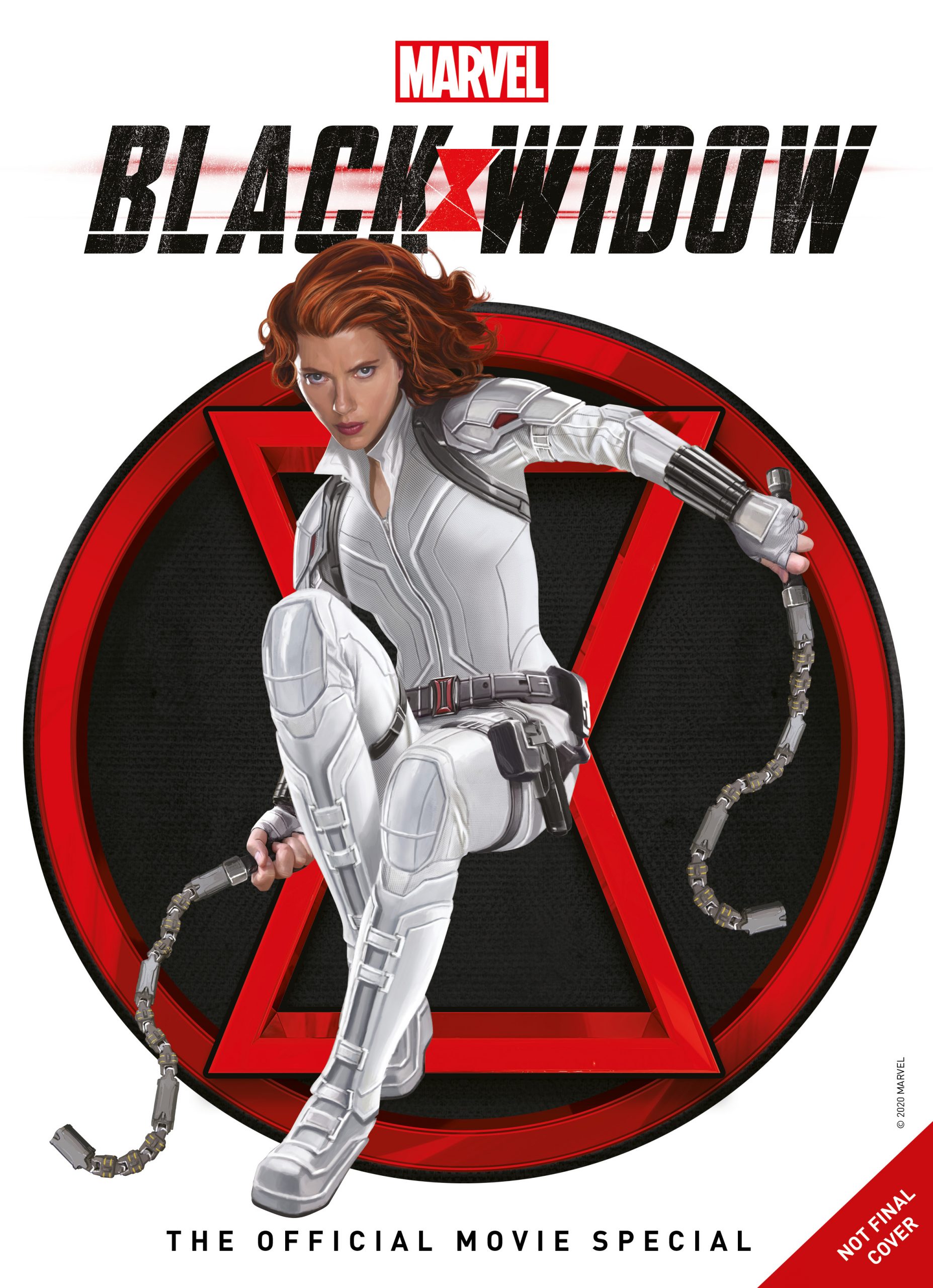 As for why now was the right time to do a Black Widow movie, Johansson explained, “There was no reason to do a Black Widow standalone film unless we could dig deep and be brave. I’m very happy with all the work that we’ve done on the Marvel Studios films. I felt that Avengers: Endgame was so satisfying I wanted to make sure that Black Widow would feel rewarding, not just for the fans, but also for myself, artistically, and creatively, after a decade of playing this character.”

She concluded saying, “This film gives the opportunity for some sort of healing and understanding as to why Natasha decides to make that ultimate sacrifice in Avengers: Endgame.”

Along with these excerpts from the interviews with Pugh and Johansson, they also revealed some behind the scenes photos of Taskmaster that includes his mask and his hood.

There also appears to be a tease of a showdown on a bridge between Johansson’s Black Widow and Taskmaster, who is most likely played by O.T. Fagbenle. 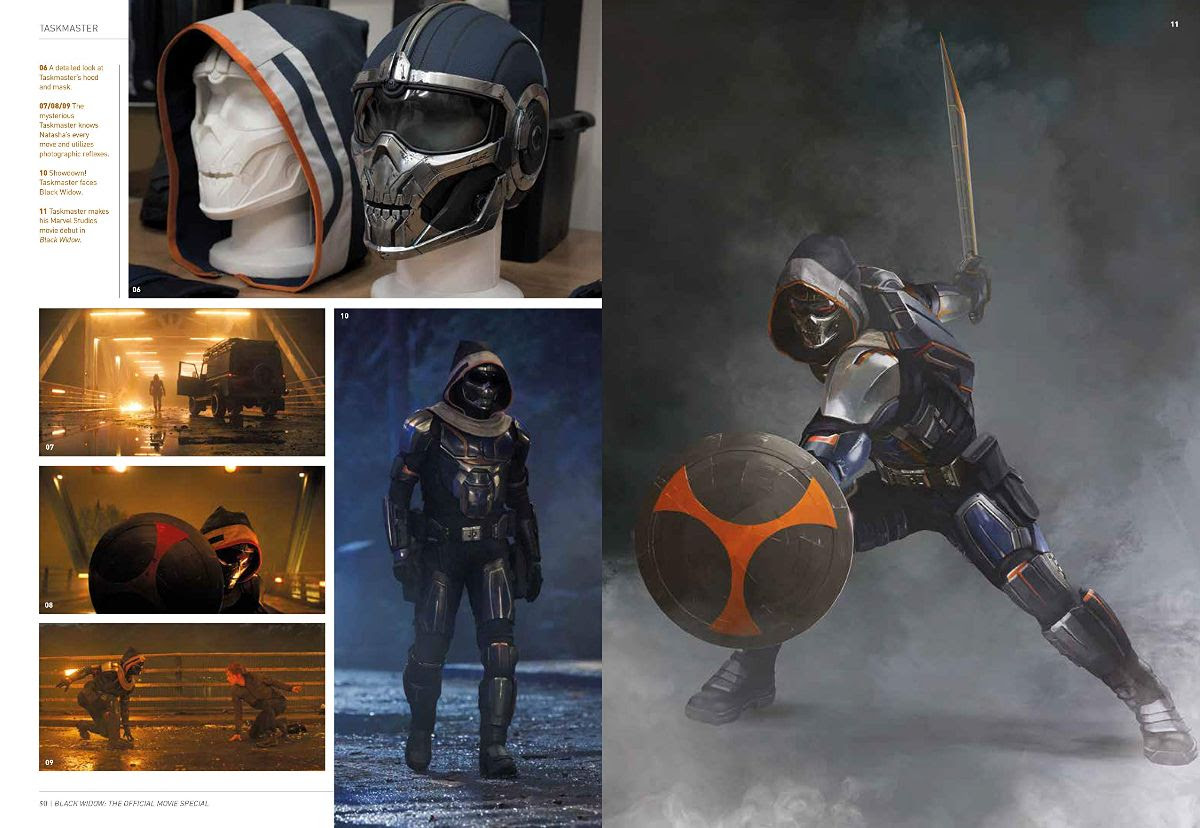 The tease appears to show that Taskmaster’s iconic ability will be on full display in the film. That ability is called “photographic reflexes.”

According to Marvel, the ability “enables him to watch another person’s physical movements and duplicate them without practice, no matter how unique or complex these movements might be.”

However, “he cannot duplicate feats that require superhuman strength or other superhuman attributes.”

This ability to duplicate people’s physical movements also allows him to predict his opponents attacks if he has previously encountered them or studied them.

Marvel Studios’ Black Widow: The Official Movie Special Book is on sale now. It retails for $19.99.

What do you make of Pugh’s comments? Are you looking forward to Black Widow?