Star Wars: The Last Jedi director Rian Johnson continued to his expose his utter lack of knowledge about Star Wars when he answered a question about his film.

Collider editor Liz Shannon Miller took to Twitter where she asked, “Did Rian Johnson personally title Star Wars Episode 8 ‘The Last Jedi’ or was that title handed to him?”

Johnson responded, “It was me, had it very early in the writing process.”

However, Del Rey previously published a Star Wars novel by Michael Reaves and Maya Kaathryn Bohnhoff titled The Last Jedi in February 2013. It was the fourth book in the Coruscant Nights series. 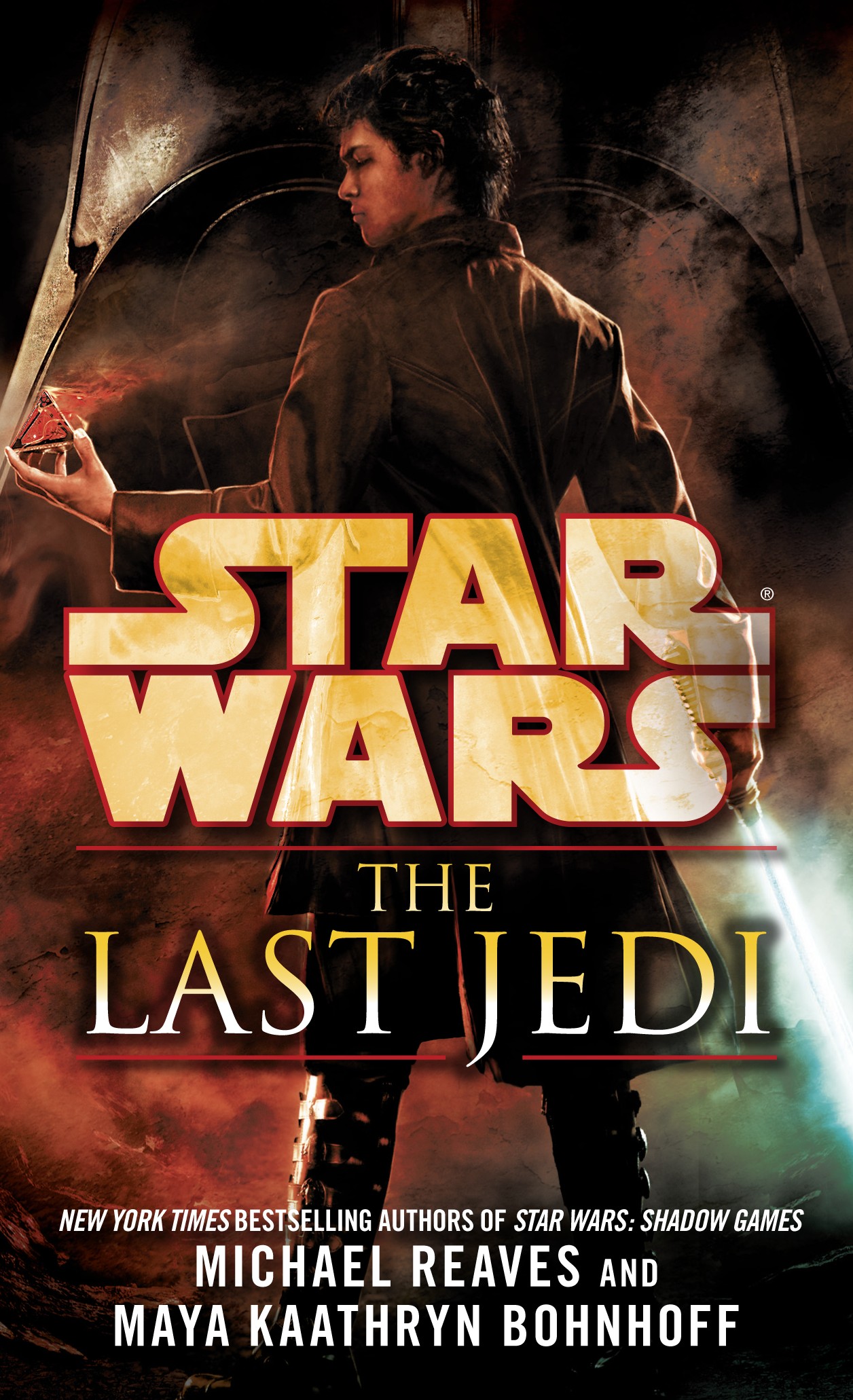 The book took place following the Emperor’s Order 66 and detailed the story of Jedi Jax Pavan who routinely attacked the Empire using guerilla warfare tactics by himself as well as part of a Coruscant-based resistance group called Whiplash.

The book specifically saw Pax act as an escort for a Whiplash leader targeted for assassination. He was charged with protecting this leader and getting him safely off Coruscant and transport him to a distant world. However, Pax draws the attention of Darth Vader who will stop it at nothing to destroy all the Jedi.

Not only is there a novel titled The Last Jedi, but a comic published by Marvel Comics in 1981 written by Mike W. Baker with art by Walt Simonson and Tom Palmer is also titled “The Last Jedi.” 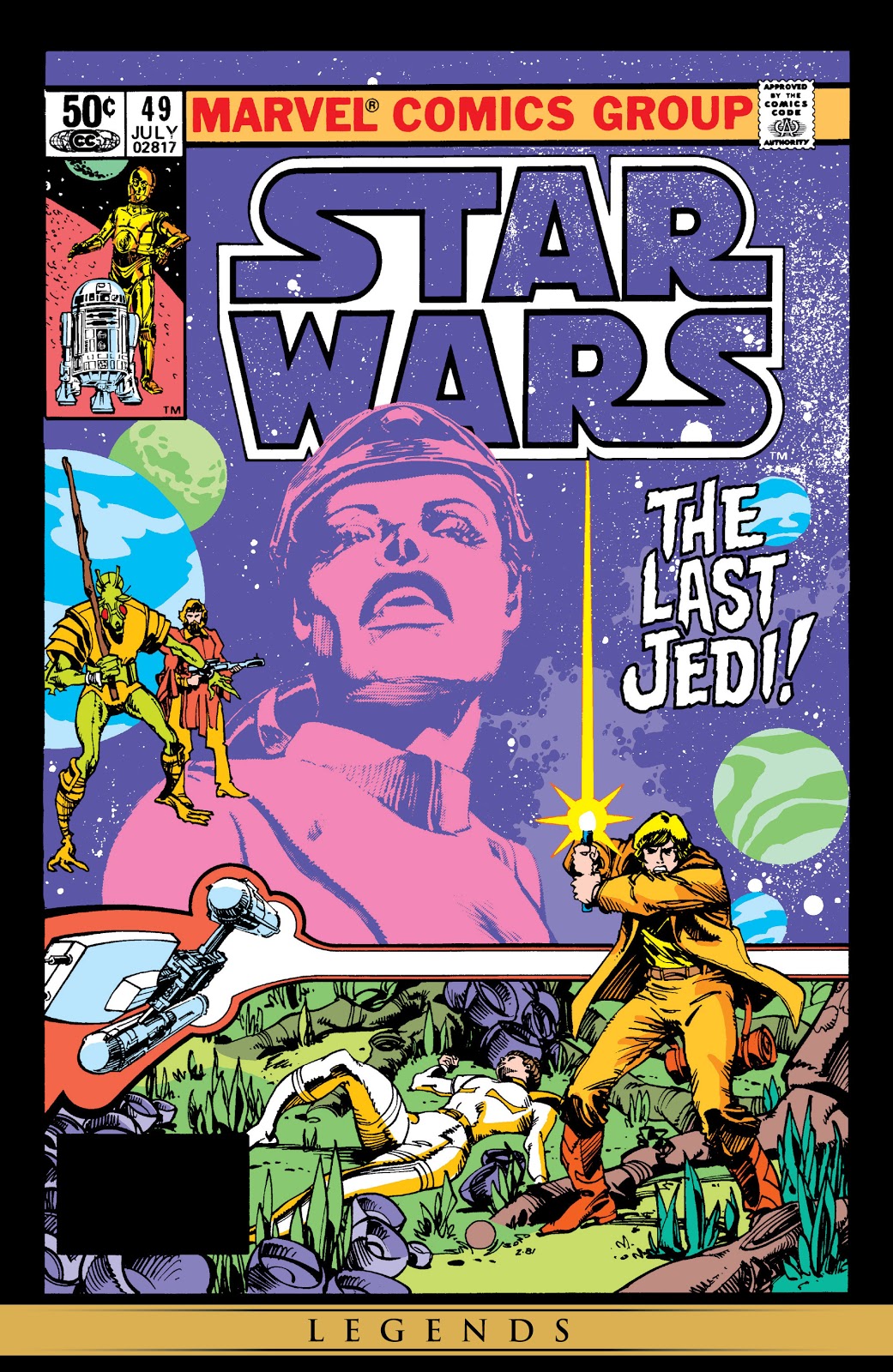 It’s not only featured on the cover, but also on the comic’s title page. 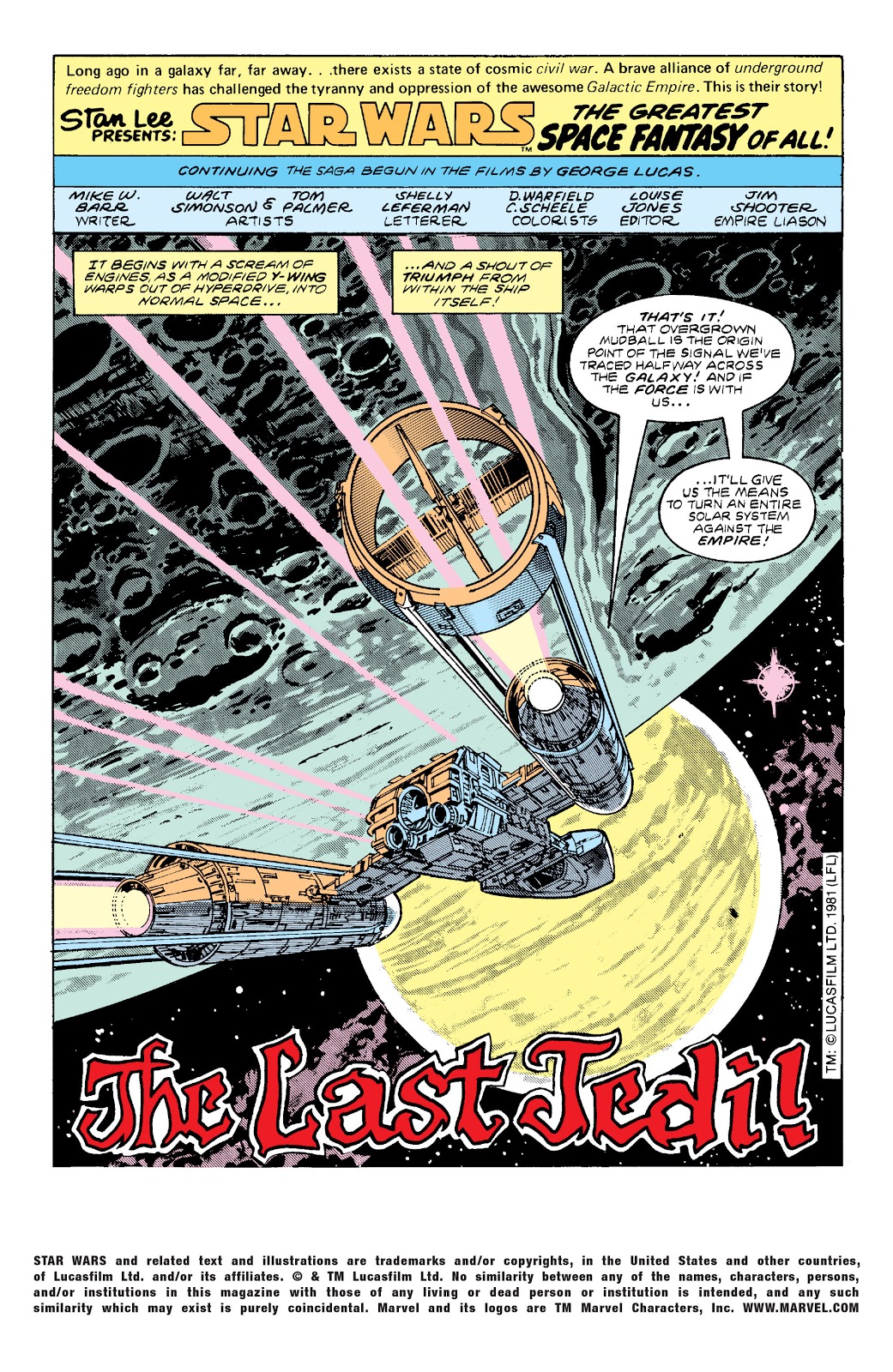 Nevertheless, a fan would then follow-up by asking, “Did you ever consider Anakin’s ghost showing up to speak with Luke and/or Rey?”

Johnson responded stating, “Briefly for the tree burning scene, but Luke’s relationship was with Vader not really Anakin, which seemed like it would complicate things more than that moment allowed.”

He then added, “Yoda felt like the more impactful teacher for that moment.” 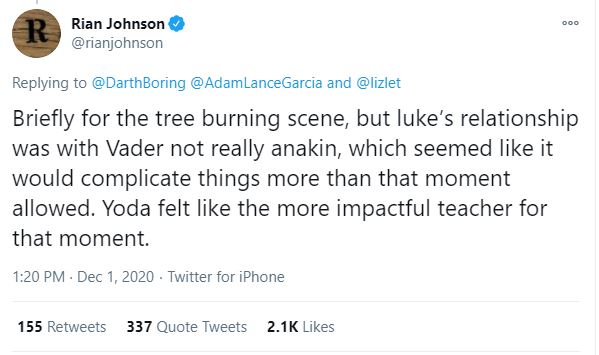 Star Wars fans were quick to point out just how absurd of a statement this is.

Twitter user OGStarwarsAB responded writing, “This confirms you have no idea what Luke was doing or understanding overall Story: Luke was addressing anakin the whole time. He was psychologically breaking him down, using love and compassion – the good in Vader is Anakin.”

She then shared a clip from Return of the Jedi, where Luke addresses his father, Anakin Skywalker.

This confirms you have no idea what Luke was doing or understanding overall Story:

Luke was addressing Anakin the whole time. He was psychologically breaking him down, using love and compassion – the good in Vader is Anakin. pic.twitter.com/KYfxiWuzFc

Twitter user @Stig791 would also respond to Johnson, “You didn’t watch ROTJ did you? The whole point of Luke’s success was that he saw Anakin in that suit, and not Vader. Hence why he managed to turn Anakin to the light again….” 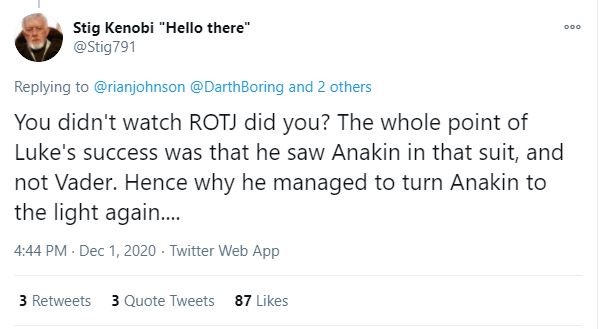 Twitter user StevenWayneArt would share a photo from Return of the Jedi when Luke takes of his father’s mask after the Emperor was defeated.

He sarcastically quoted Johnson, “Luke’s relationship was with Vader not really Anakin.” 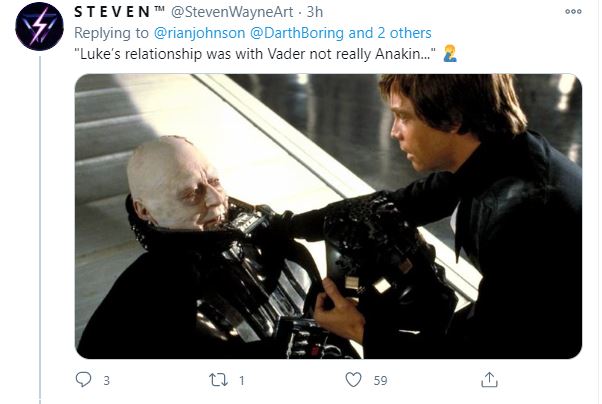 Twitter user VikingOutofTime also added, “Perhaps it’s true because Yoda trained him for the most part. However, the ending to ROTJ gives us a clue as to who his guides are. There are three ghosts seeing him: Yoda, Obi-Wan and Anakin, not Vader. A moment with those three and Luke sounds epic to me.”

ElDiosGalleta would echo OG Star Wars point writing, “That’s a weird thing to say since Luke always treated him as his father Anakin not as Vader. And even then, when Anakin is about to die, before that happening he speaks to Luke and it wasn’t Vader anymore there, it was Anakin who had just turned in to light side.” 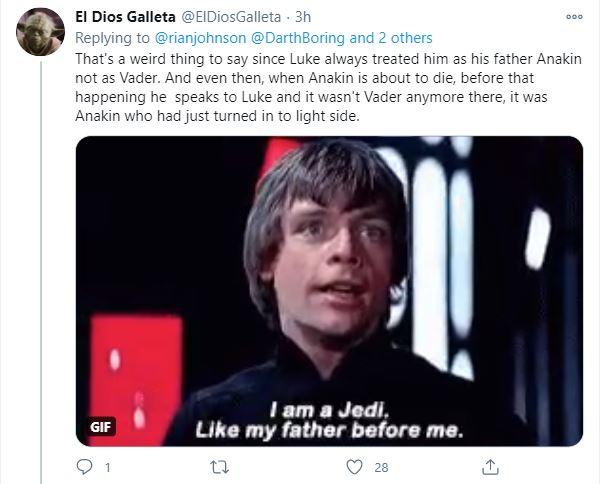 It’s truly astounding Rian Johnson was able to direct a Star Wars film when he clearly lacks a basic understanding of the original films. But I guess that’s probably who Lucasfilm is really looking for nowadays given the entire sequel trilogy.

What do you make of Johnson’s comments about The Last Jedi and more specifically about Luke Skywalker’s relationship with Anakin Skywalker?