An alleged excerpt from The Art of Star Wars: The Mandalorian appears to debunk rumors regarding an internal civil war inside Lucasfilm about Star Wars.

Back in May 2020, scooper WDW Pro at WDWMagic Forums detailed there was an internal power struggle over the control of Star Wars at Lucasfilm.

As part of his scoop, WDW Pro stated, “The ongoing battle over Lucasfilm’s direction continues, with Kathleen Kennedy and Jon Favreau factions fighting over the studio. It’s fairly well known at this point that the beef between Kennedy and Iger is real, given that Iger essentially ignored her in his memoirs.”

“It’s also hard to lose sight of how many projects Kennedy has seen fail at Lucasfilm (Star Wars Resistance, Star Wars Forces of Destiny, Star Wars Galaxy of Adventures, Solo, and the Sequel Trilogy falling in revenues with each release), while Favreau seemingly struck it out of the park with The Mandalorian — a series for Disney+ that even Iger was giving creative suggestions for and taking notes on each episode,” he continued.

To emphasize his point of this alleged brewing civil war, WDW Pro pointed to the then newly announced Taika Waititi film and the Leslye Headland female centric series, which we now know is The Acolyte.

WDW Pro explained, “Buried in the lead of Waititi directing a new Star Wars film (which Kennedy has no creative control over) was confirmation of the “female-centric” Star Wars series being helmed by former Weinstein personal assistant Headland.”

“But be ready, because it looks almost certain that a new narrative is being pushed by Kennedy loyalists in Lucasfilm… and that narrative is that Headland was ONLY a personal assistant for one year, and that being against her or her series is misogynistic, mean, and unfair,” he continued.

WDW Pro then stated, “Again, this is a conflict that Disney doesn’t want; they don’t want conflict over a hire that lavishly praised Weinstein, deleted hundreds of tweets at the same time as a leak about her project, and may know dirt on Iger and Eisner.”

In a follow-up to this rumor, YouTuber Doomcock would provide more details on the alleged civil war inside Lucasfilm between Jon Favreau factions and Kathleen Kennedy factions.

Doomcock claimed that Kennedy was indeed involved in the creation of The Mandalorian.

He states, “I am informed it was Kathleen Kennedy’s idea that The Mandalorian should be protecting a child. Not a bad idea. It hearkens back to lone wolf and cub. It’s a proven and effective formula. And indeed it has been successful.”

He would go on to reveal that it was Favreau’s idea to make the child a baby Yoda and that’s where the civil war between Kennedy and Favreau factions began.

Doomcock explained, “My sources claim that in Kathleen Kennedy’s mind Baby Yoda was her idea and she feels slighted that she didn’t properly receive credit for the creation of Baby Yoda.”

“Aside from feeling cheated out of her fair credit, according to my source, Kennedy was very unhappy with how the whole thing was implemented. Kennedy reportedly wanted so-called Baby Yoda to be Baby Yodette. In short she wanted the baby to be female not male,” he added.

He then claimed, “Furthermore, Kennedy wanted a female director for the pilot and in defiance of that Jon Favreau brought in Dave Filoni to direct disregarding her wishes again. At that point, according to my source, the battle lines were drawn.”

From there Doomcock detailed tensions began to escalate when Kennedy learned from Bob Iger that Favreau, Filoni and George Lucas were working on scripts for The Mandalorian Season 3.

The YouTuber stated, “In the course of that conversation Kathleen Kennedy learned that Favreau, Filoni, and George Lucas himself were already working on a script. To say that this did not go over well was an understatement.”

“Indeed I am told that Kennedy lost it, saying in effect, ‘I will have it my way or I will burn this silly nonsense to the ground,'” he continued. 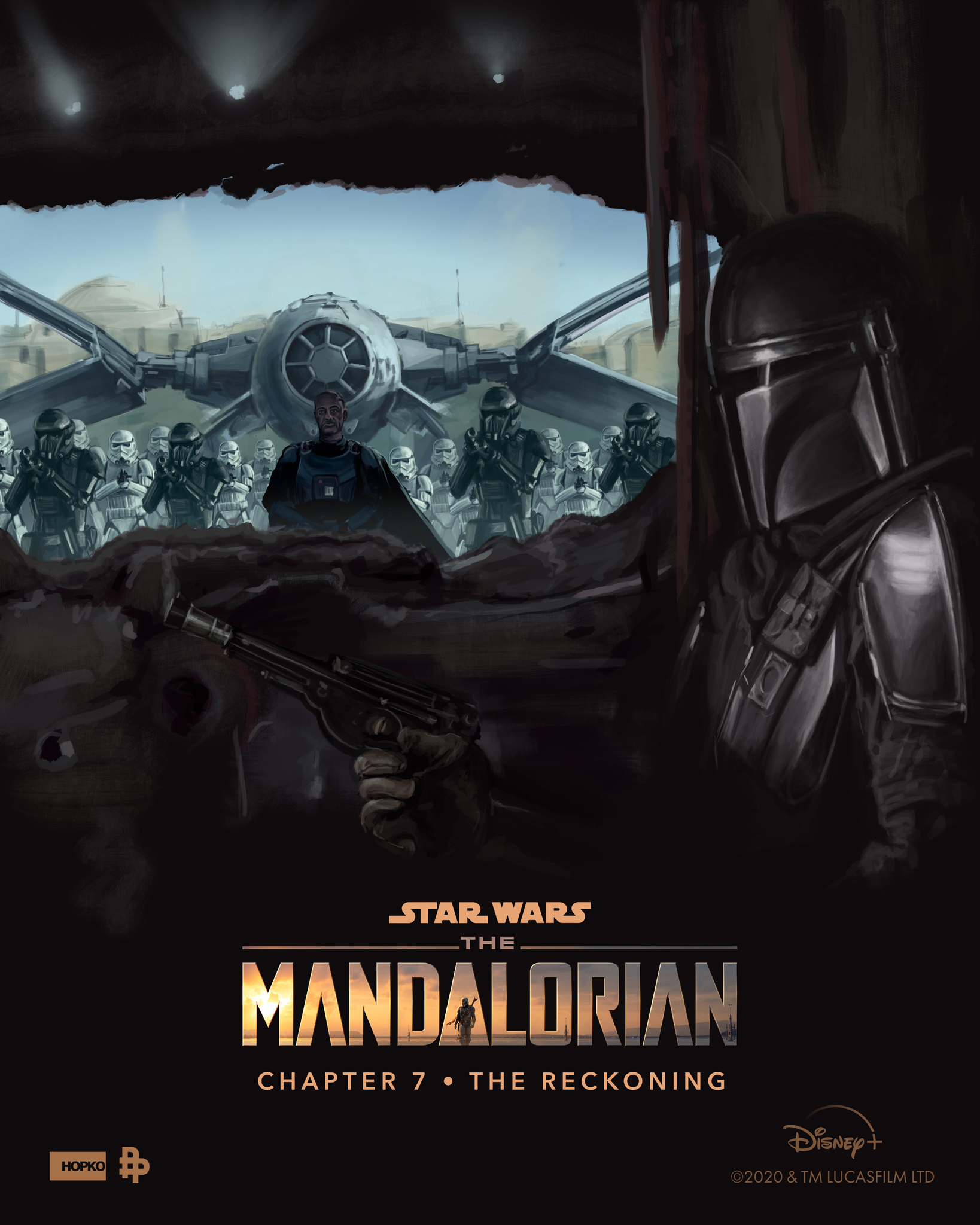 He then relayed that a source told him, “It is civil war at Lucasfilm.”

He also indicated that George Lucas was at the center of this civil war, “While the sides have reportedly boiled down to Jon and Dave versus Kathleen Kennedy in the past, it seems a new player has entered the great game as George Lucas himself has gotten involved.” 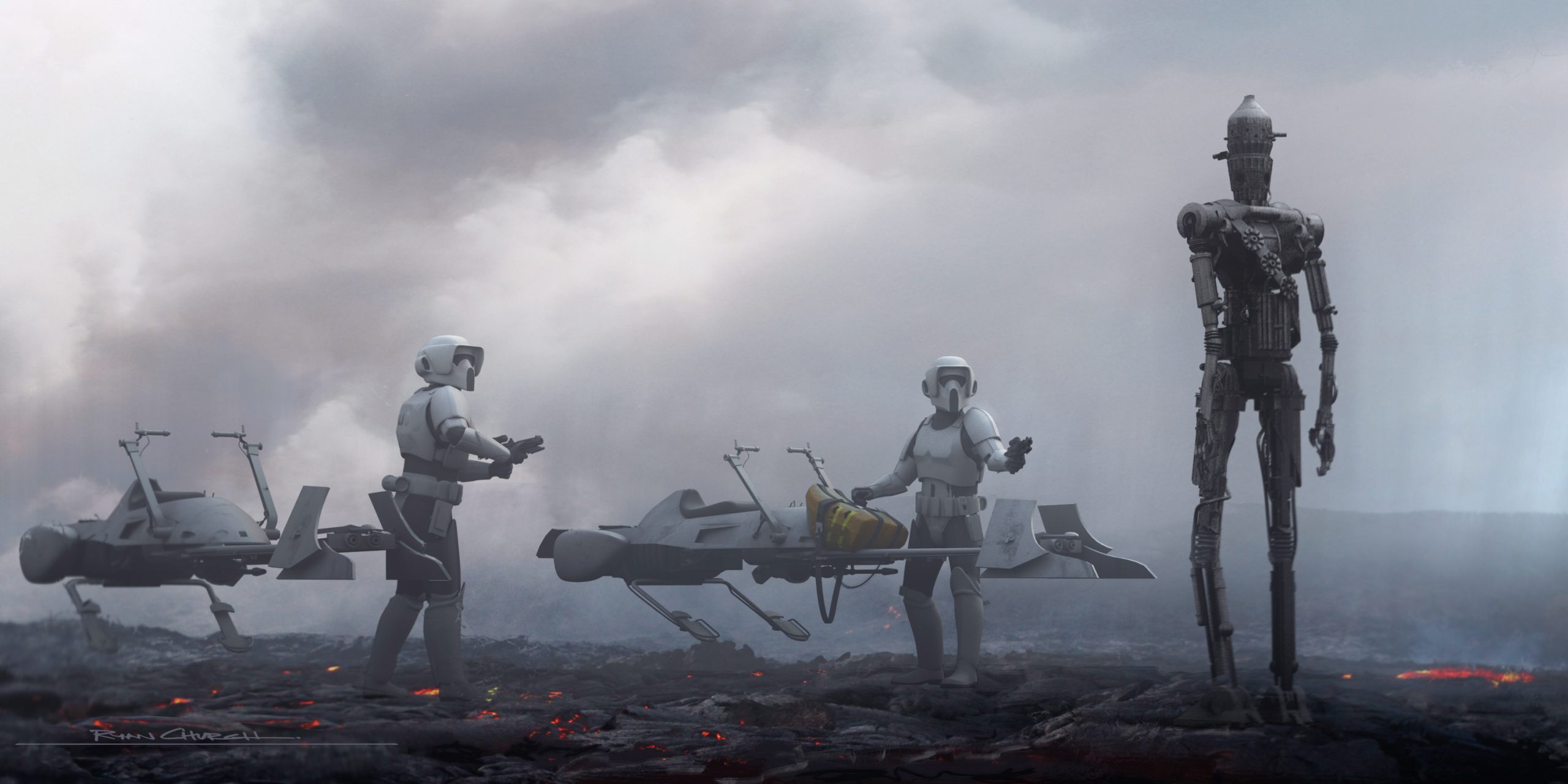 However, these rumors about a civil war inside Lucasfilm might be just that. Artist Steven Wayne recently shared an excerpt from Phil Szostak’s The Art of Star Wars: The Mandalorian (Season One) to Twitter.

The excerpt reveals just how involved Kathleen Kennedy was in the creation of The Mandalorian and that it was her idea to bring Favreau and Filoni together.

It reads, “On September 25, Jon Favreau replied to Kennedy’s email gauging his interest in a live-action TV series, expressing interest in Mandalorians, a subject Filoni also wished to explore further.”

“Favreau and Filoni, sharing a mutual history in Mandalorians from their time on Clone Wars, were reunited by Kennedy to collaborate on the subject in the November 14 meeting at the Kennedy-Marshall Company, culminating in the creation of pitch art that same month. Filoni quickly fed sketches of potential moments in the series to Doug Chiang’s Lucasfilm art department.”

It then states, “‘Through my sketches, Jon and I can instantly communicate,’ Filoni said. ‘And when we talk to Doug, hopefully we’re on a symmetrical page. Then the art department make it something you could never have dreamed of. I love working with them. But [in late 2017], I was still learning how. My Clone Wars and Rebels sketches end up pretty one-to-one [with the final designs]. Whereas in live action, it’s a more fluid evolution.'” 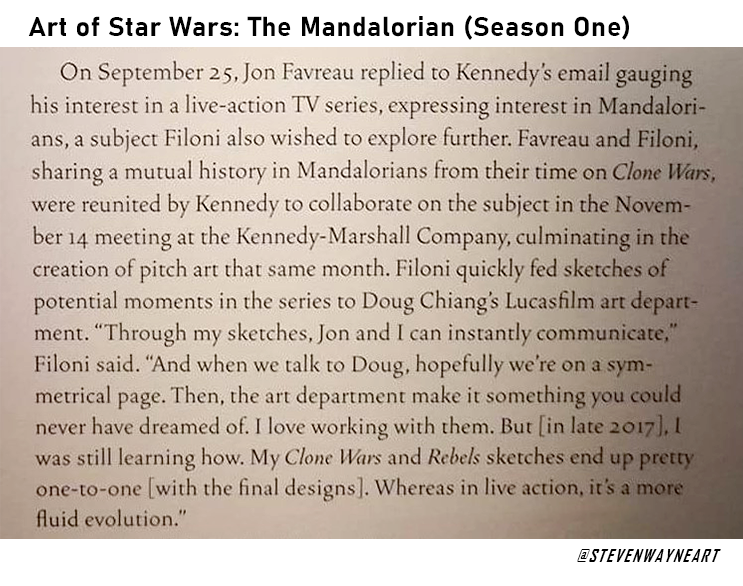 Wayne wrote on Twitter, “Many have said that Kathleen Kennedy had nothing to do with creating The Mandalorian or with hiring Jon Favreau. Turns out, she personally contacted him and teamed him up with Dave Filoni to develop the idea at her own Kennedy-Marshall Company…”

He added, “The Mandalorian is her show.” 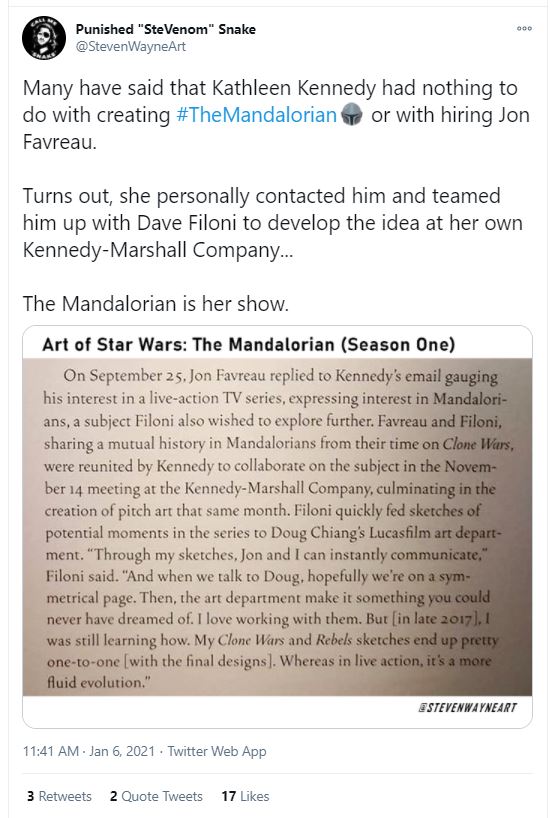 What do you make of this excerpt from The Art of Star Wars: The Mandalorian (Season One)? Do you think it debunks the rumors about a civil war inside Lucasfilm? Do you think Kathleen Kennedy has significant influence over the show?