Marvel MiniMates are a set of toys from Diamond Select that are two inches tall and come with fully interchangeable parts as well as a clear base to display them.

A photo of packaging for WandaVision themed Marvel MiniMates shows off both the Scarlet Witch and Marvel villain Mephisto.

The image, seen below, was shared to 4Chan by an anonymous user who wrote, “WandaVision’s villain has been revealed via Minimates toy package.” 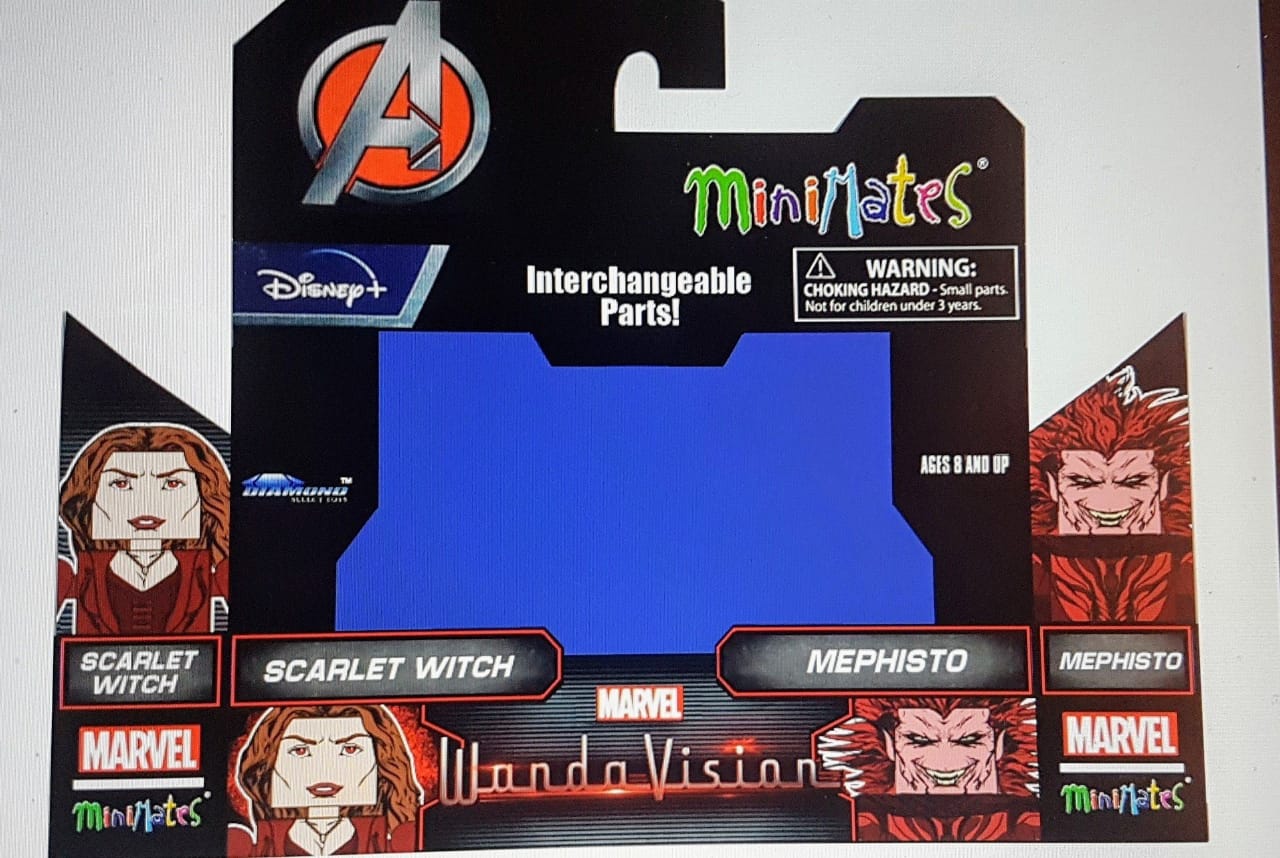 The leaked image appears to have originated from Twitter user @feiticeiraescbr.

A translation of the tweet reads, “SPOILER ALERT: Image of a toy WandaVision which confirms the apperance of the demon Mephisto as the series’ villain.” 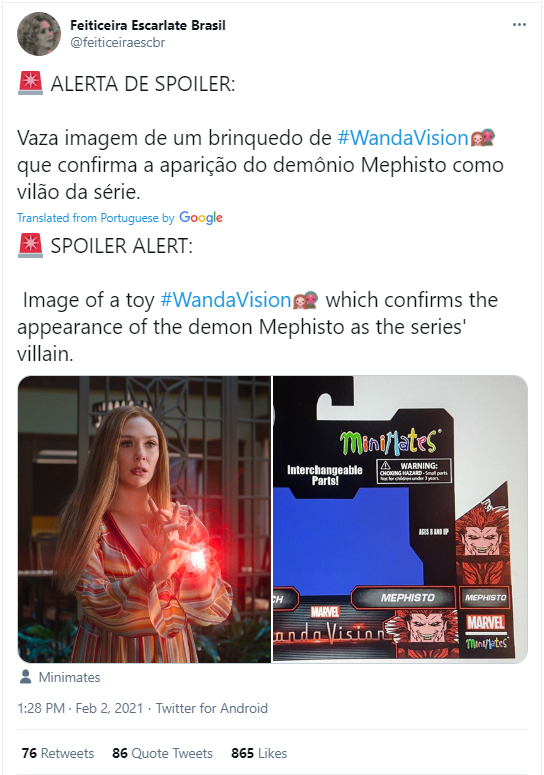 It shouldn’t come as a surprise to comic book readers that Mephisto would show up as a villain in WandaVision.

The character has played a prominent role as a villain in Scarlet Witch’s history.

In Avengers: West Coast #51, it is revealed that Wanda’s children, Thomas and William, are not what they seem.

Agatha Harkness explains to Wanda that when she does not think of her children they simply cease to exist. 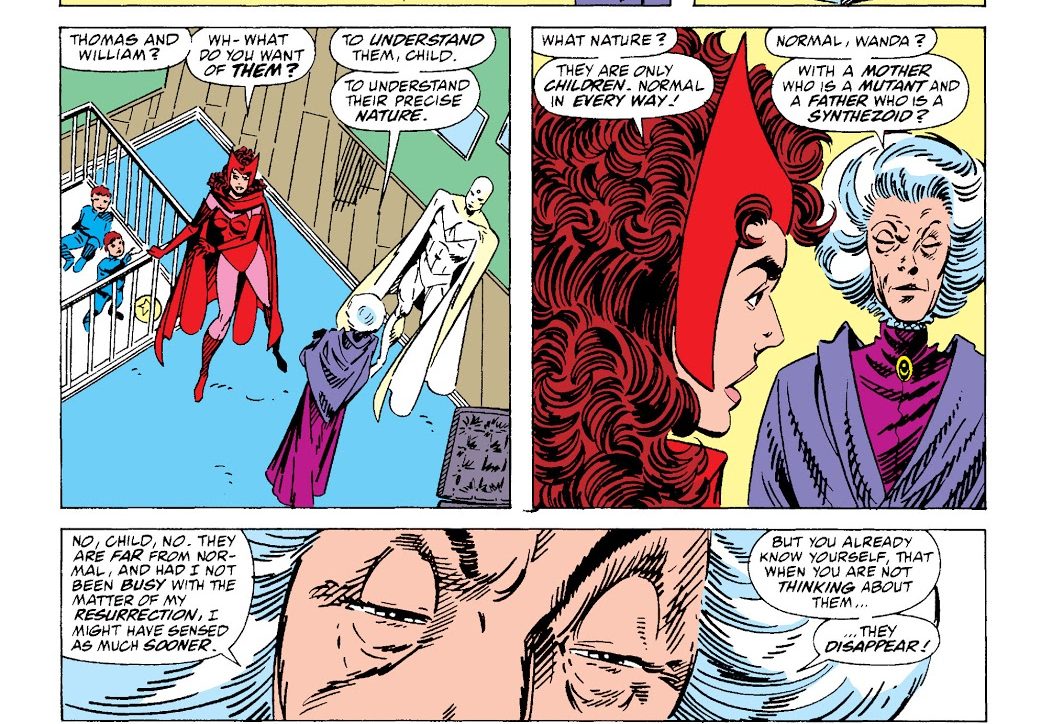 The two twins would eventually be kidnapped by Master Pandemonium believing they were pieces of his own soul that Mephisto had taken from him and broken into five parts.

The villain even fuses Wanda’s children to him and turns them into his own arms and hands. 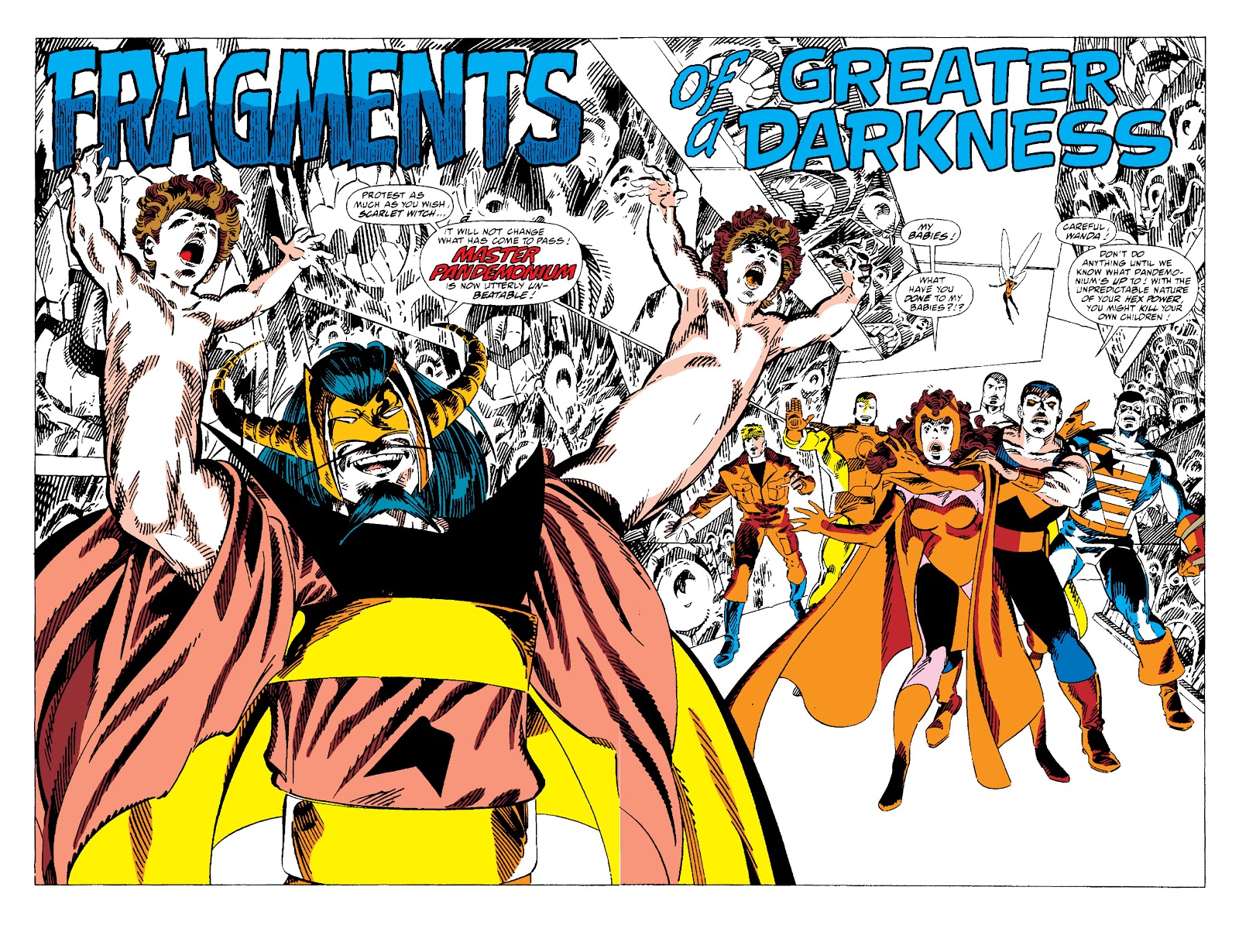 The mystery of Wanda’s children would be further explained Agatha Harkness, who reveals that the children are actually a creation of Wanda who used her magical talents combined with her mutant power to create them.

However, Harkness also acknowledges that even with Wanda’s combined powers she does not have the ability to create life and thus there is still something she does not know about Wanda’s children.

Mephisto would eventually arrive as Master Pandemonium fought against the West Coast Avengers to clear everything up.

He revealed that he used Master Pandemonium as his unwitting pawn to search for the fragments of his own soul that had been shattered into six pieces after he was defeated by Franklin Richards. 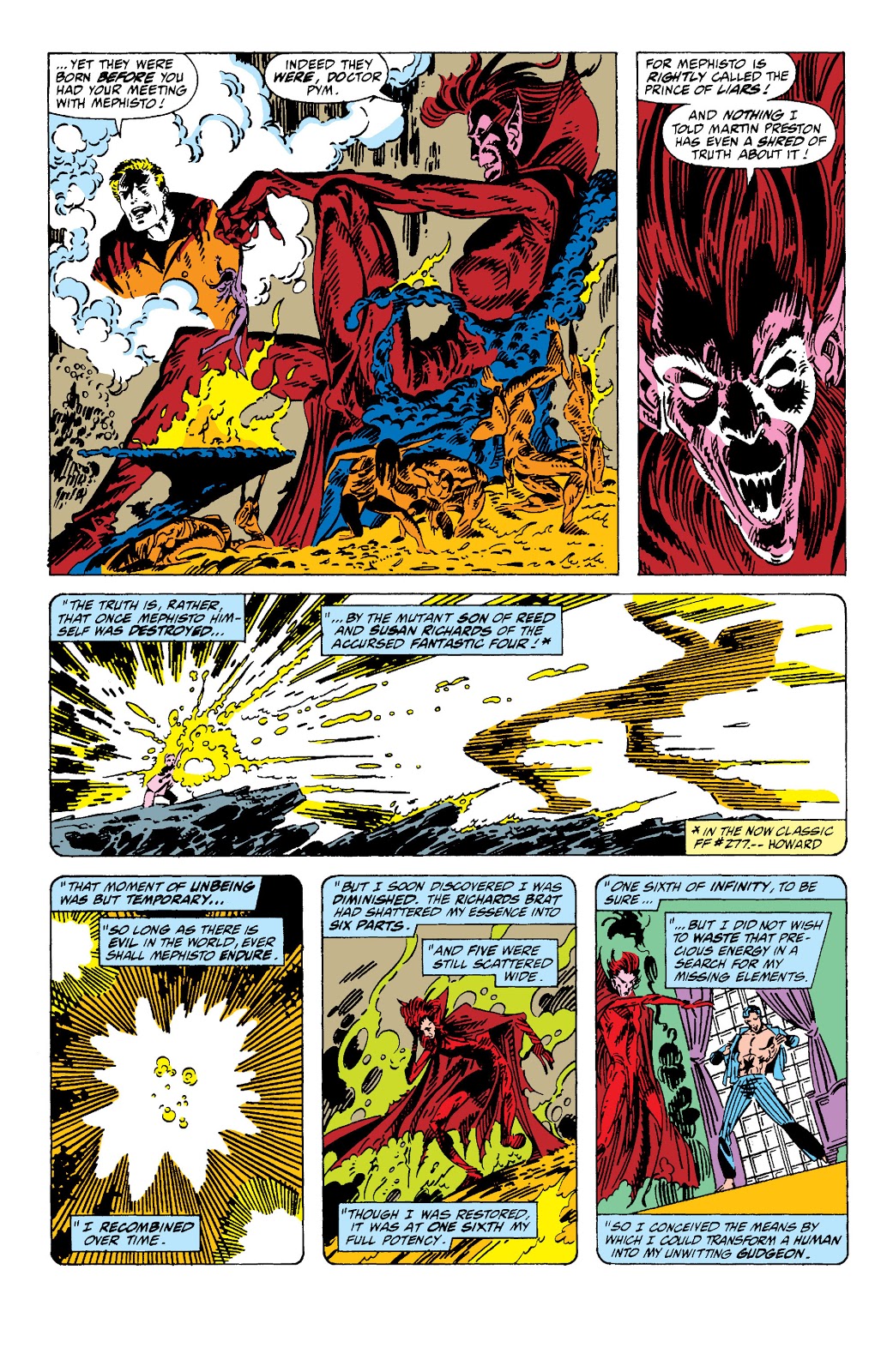 Master Pandemonium would eventually obtain the last two fragments that he believed were his soul. However, upon obtaining them, Mephisto would appear to completely absorb him along with Wanda’s twin sons. 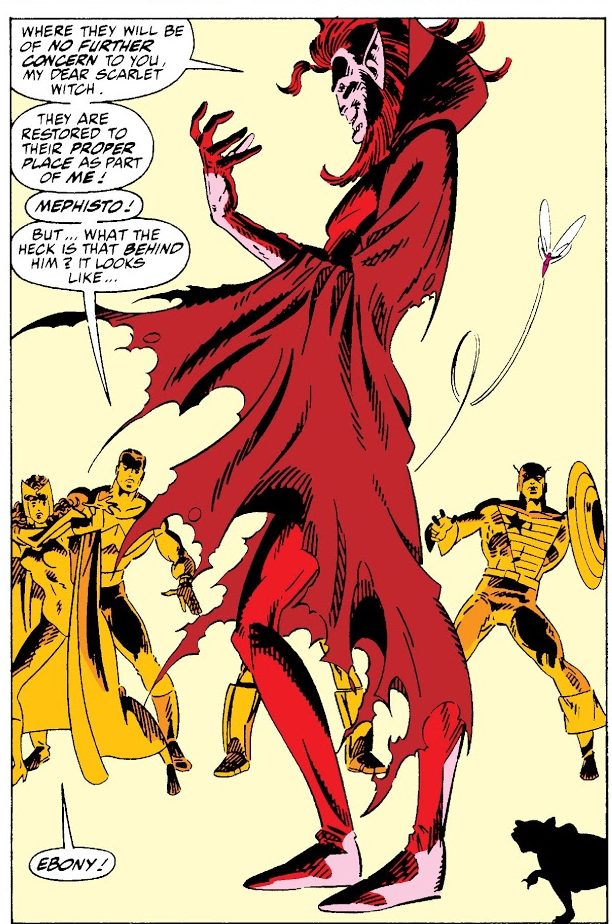 With Mephisto completely restored to power, the Avengers find themselves completely unmatched. However, they still have an ace up their sleeve with Agatha Harkness.

Harkness realizes that the two pieces of Mephisto’s soul that became William and Thomas are still bound by the spell Wanda used.

Thus in order to defeat Mephisto, Harkness wipes Wanda’s memory of her children. This causes Mephisto to disperse.  At least for a little while, as he can never truly be defeated as long as evil still lingers in the world. 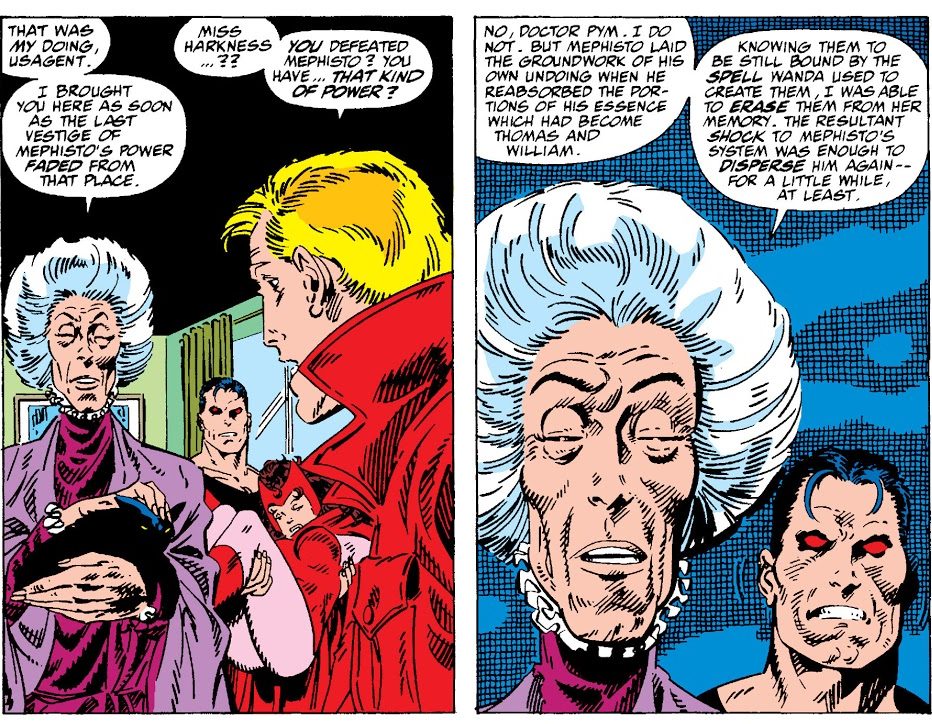 If all of this still doesn’t make sense, Harkness explains how it all went down to the Wasp.

She states, Wanda longed all her life for the kind of normal existence forever denied her by her mutant powers. She so greatly desired a family — in her mind the perfect symbol of a peaceful, happy life — that she suffered what in a human would have been a hysterical or imaginary pregnancy.”

“In such cases there is usually no child to be born… But Wanda’s power to change probabilities created Thomas and William. Twins, you see, to double the fulfillment of her dream,” she continued.

Harkness then concluded, “Since her power cannot create true life, she reached out unconsciously to share anything which would function as souls for the newborns. What she caught, still much weakened by their recent separation, was two of the missing pieces of Mephisto!” 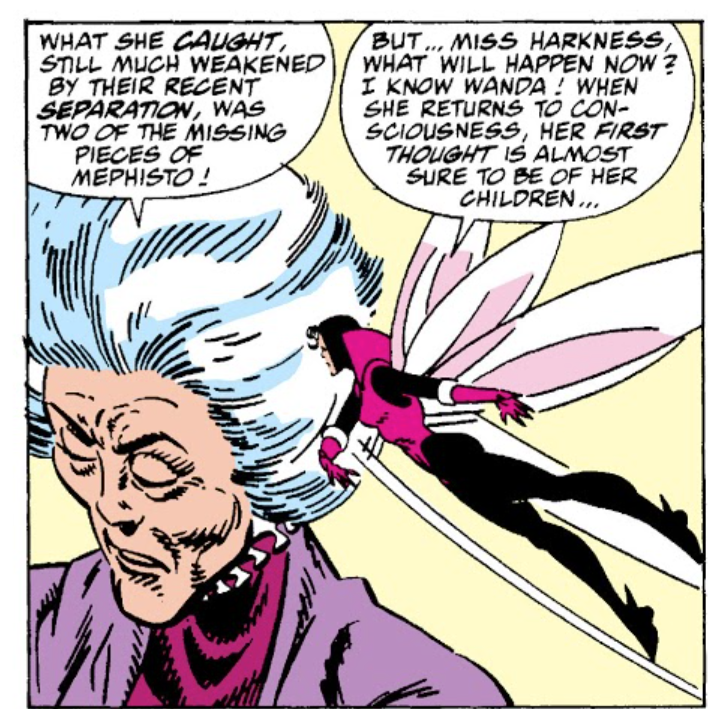 Given the fact that Wanda does indeed have twins named Billy and Tommy in the show and they too have appeared on the show seemingly out of nowhere, it only seems natural that Mephisto might be involved.

And this MiniMates toy leak appears to confirm his appearance.