The My Hero Academia anime revealed their first look at Class 1-B’s hero costumes for the upcoming fifth season. 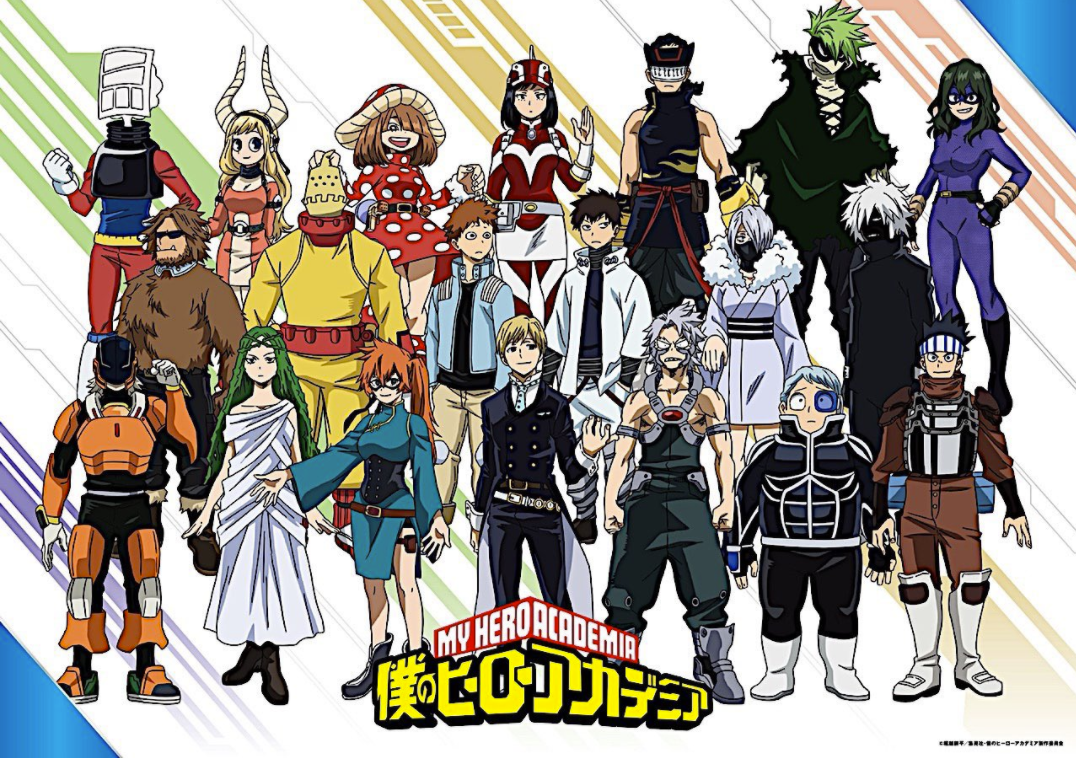 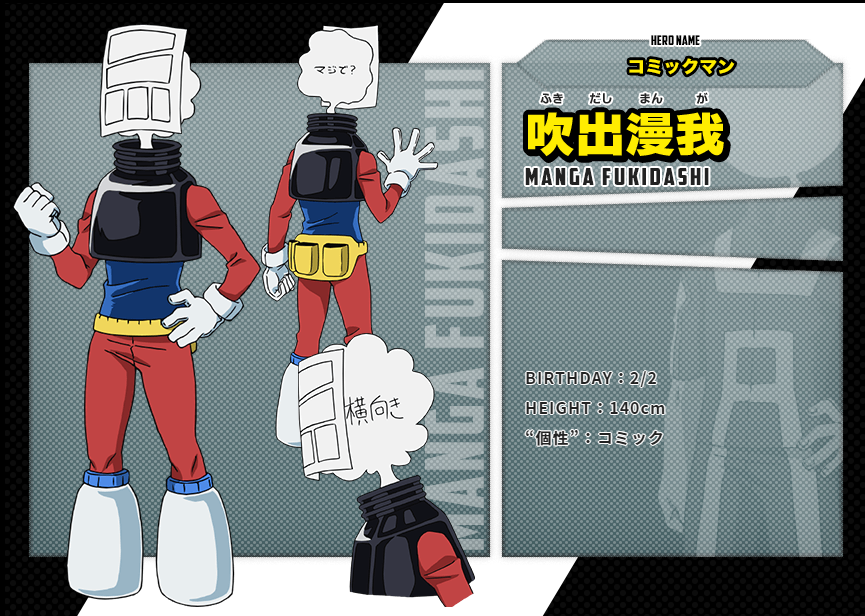 Starting from the top left, you can see Manga Fukidashi.

He has the unique Quirk called Comic. It allows him to create onomatopoeia words in the air and then use them to create the actual phenomenon the words suggest. 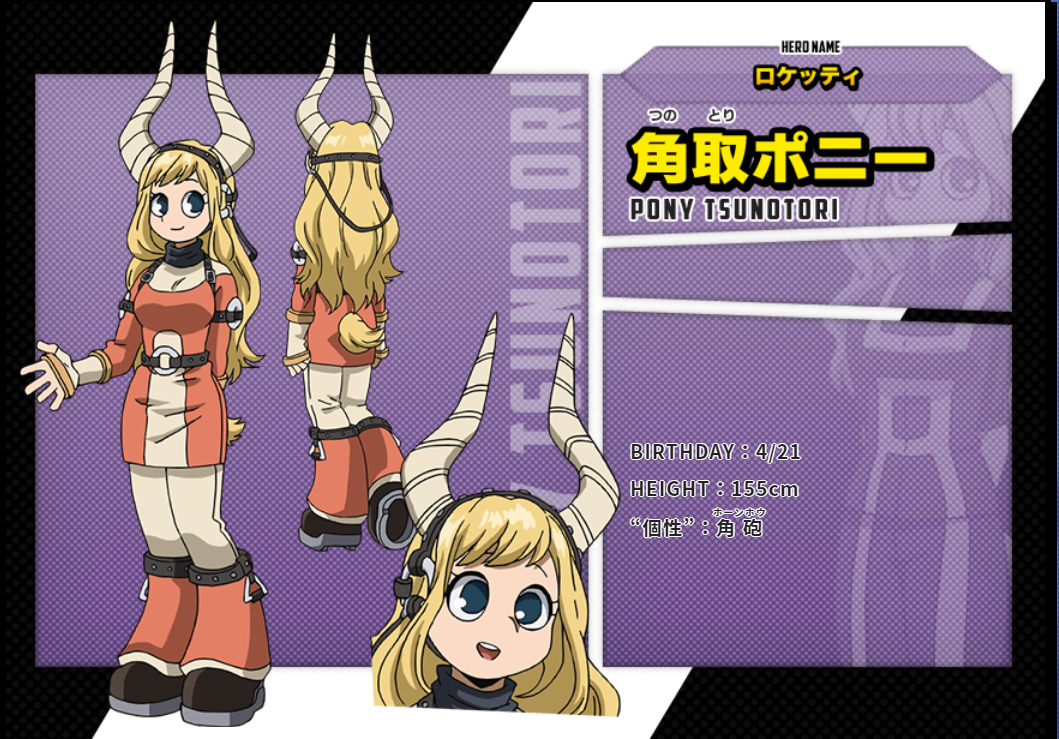 Continuing from left to right, we see Pony Tsunotori.

Her quirk is called Horn Cannon. The quirk gives her horns on her head that she is able to launch as projectiles. As soon as she fires off her horns, new ones grow back immediately. She is able to control four horns at the same time. 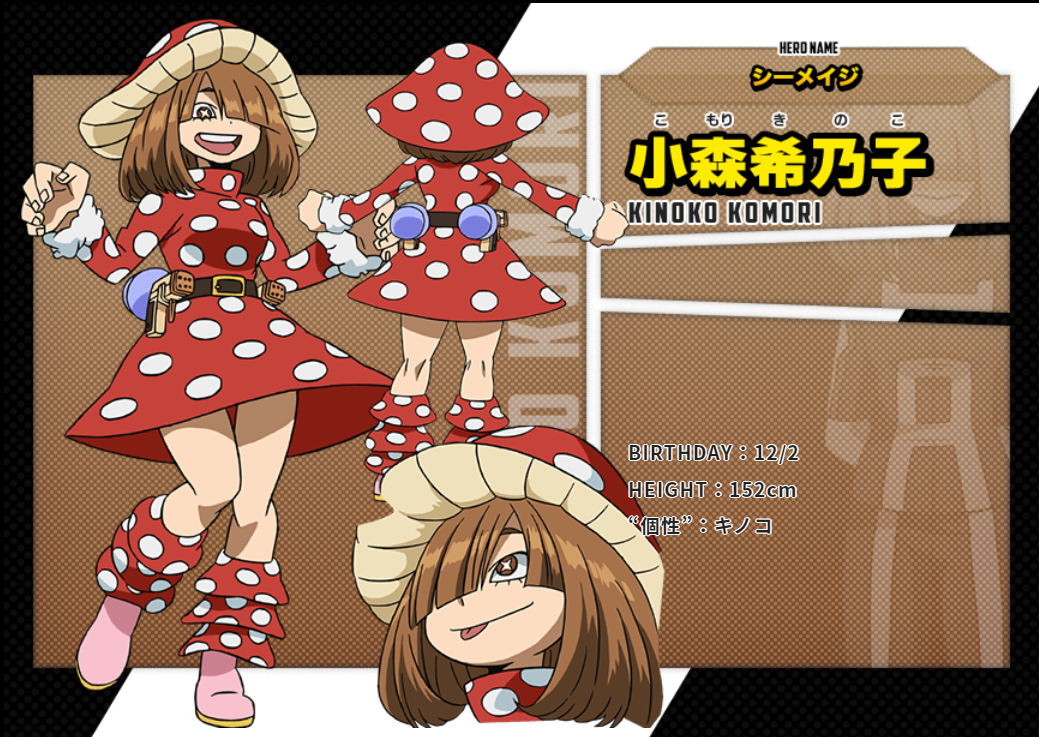 Next is Kinoko Komori.

Her quirk is called Mushroom. It allows her to mass produce a variety of fungus spores from her body. Upon making contact with a solid surface the spores develop into full grown mushrooms. She can use the spores to grow mushrooms in a variety of locations even in her opponents’ bodies. However, they only last up to three hours. 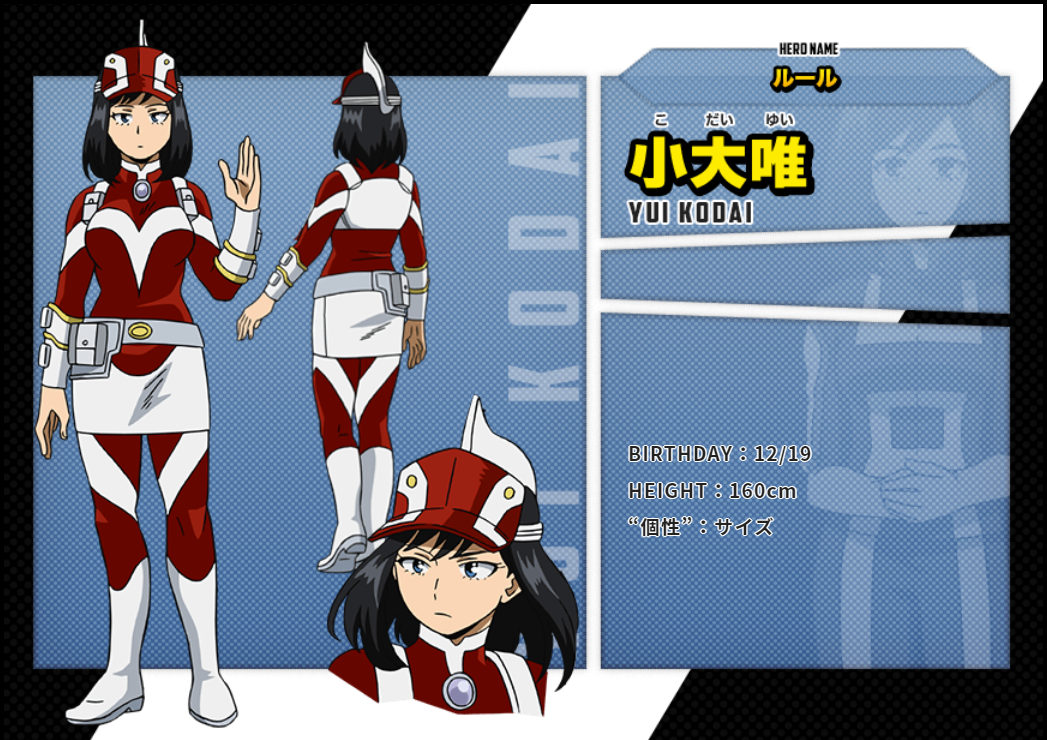 Yui Kodai is to the right of Kinoko Komori.

Her quirk is called Size. It allows her to change the size of nonliving objects she has interacted with. 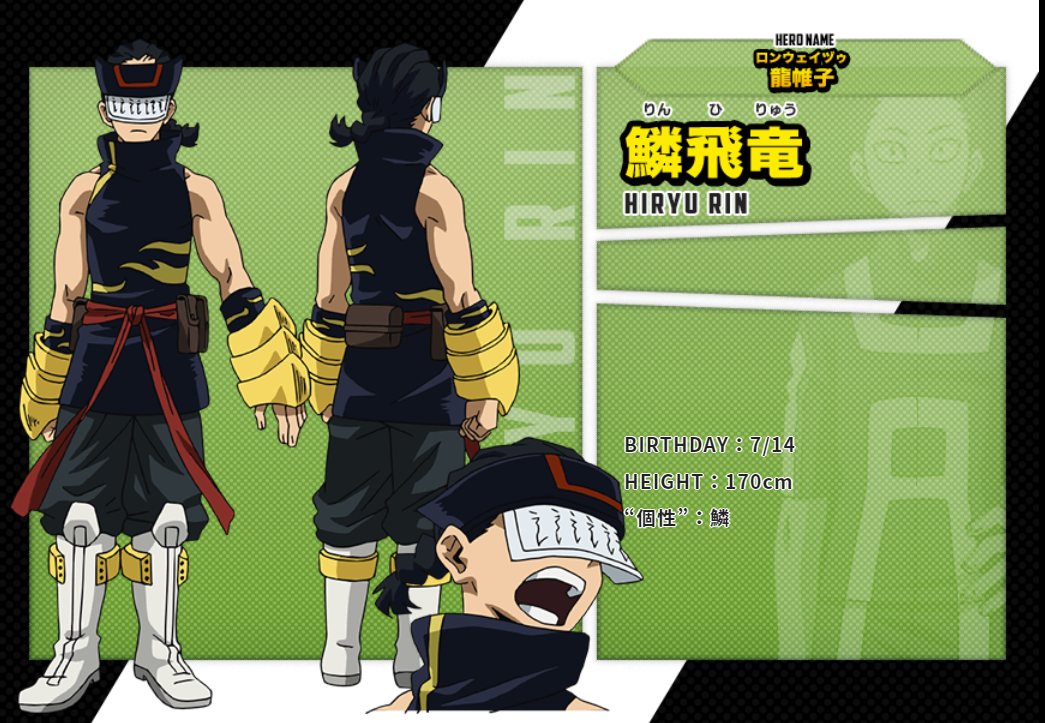 Hiryu Rin’s quirk is called Scales. It allows him to create reptilian scales over his body. He can use the scales as armor or use them to create projectiles to launch an offensive attack. 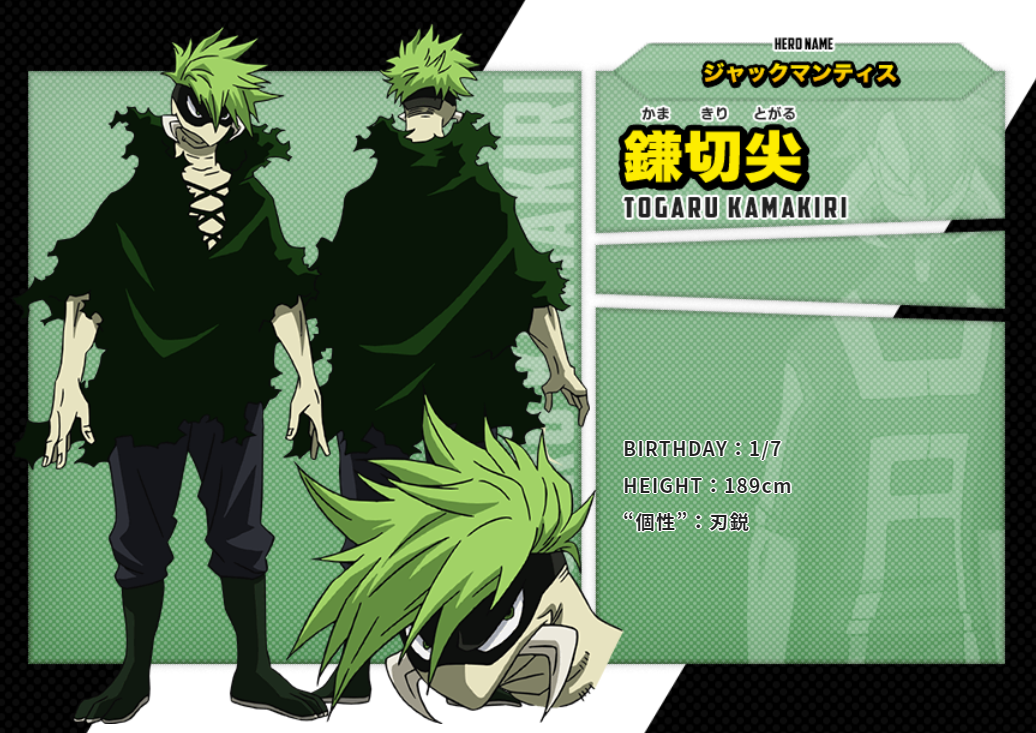 Togaru Kamakiri’s quirk is called Razor Sharp. The quirk allows him to create blades from any part of his body. 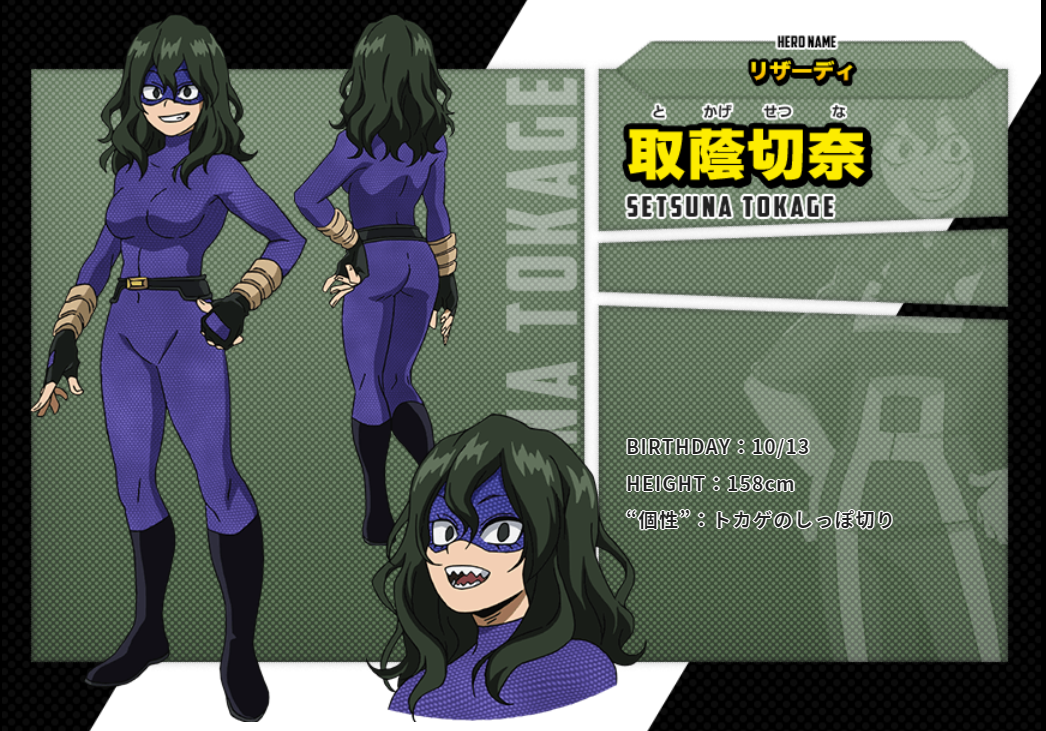 The quirk allows her to split her body into as many 50 different parts. She can then individually control each part. On top of that each part is able to levitate and move freely by itself.

Lizard Tail Splitter also comes with a regeneration ability that allows her to fully grow back any part that has been destroyed. 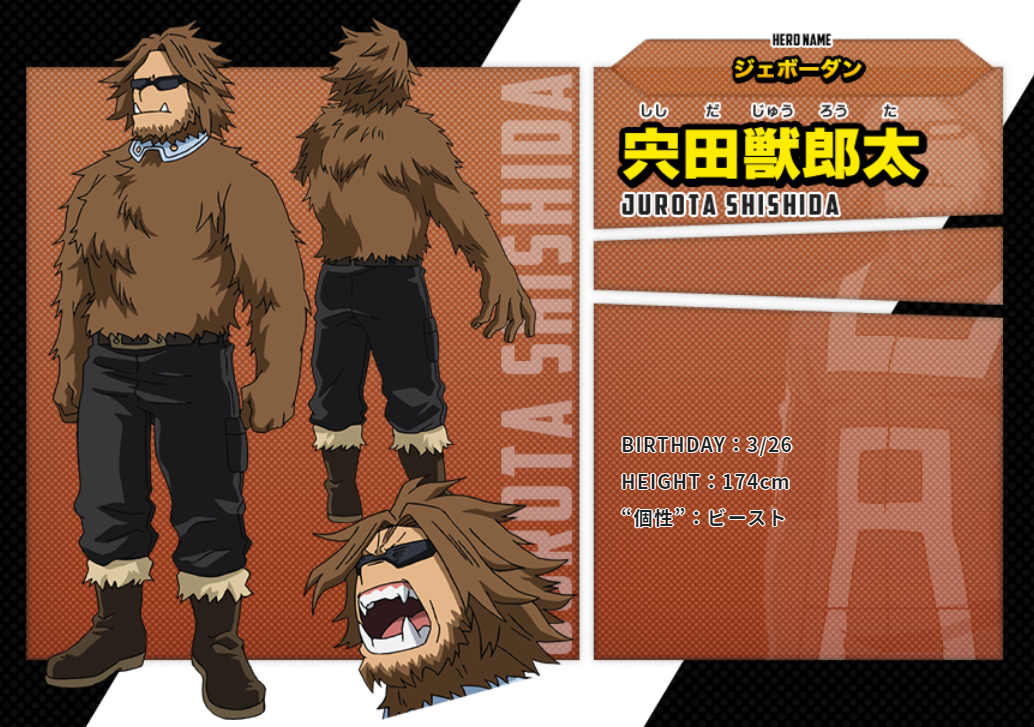 Shishida’s perk is called Beast. It allows him to transform into a monstrous beast. While in this form his strength, speed, and durability are all greatly increased. It also increases his sense of hearing and smell.

However, while in the form he does lose control and discipline and acts more like a reckless, wild beast. 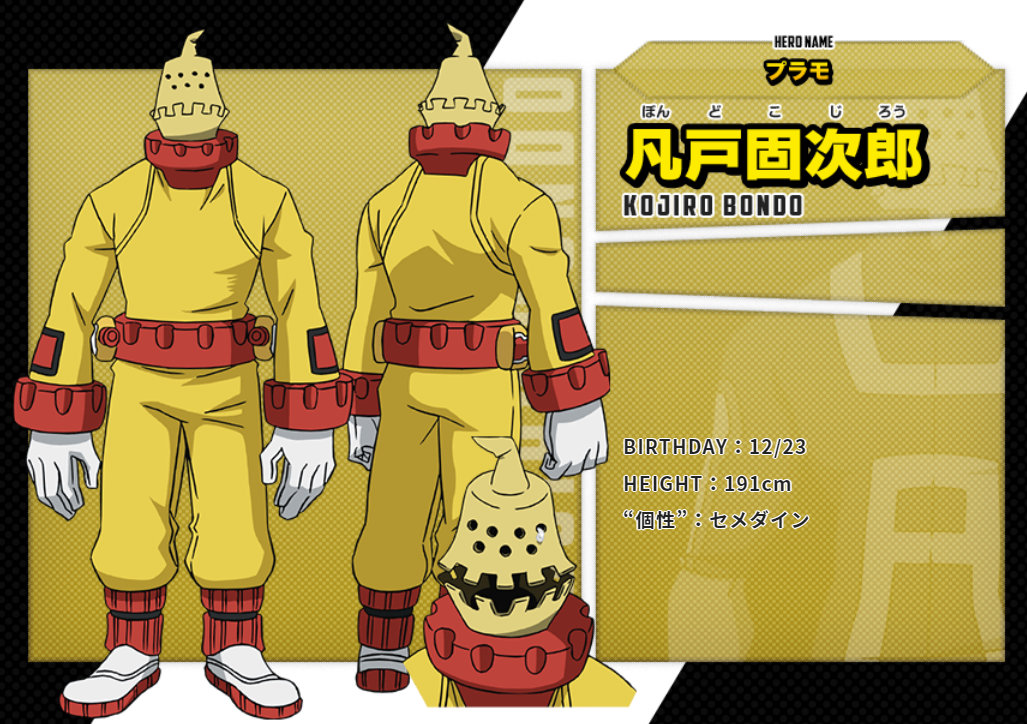 Kojiro Bondo’s quirk is called Cemedine. The quirk allows him to spray a sticky fast-drying, glue-like substance from the seven holes on his head.

His quirk gives him the ability to control the speed at which the sticky substance dries. 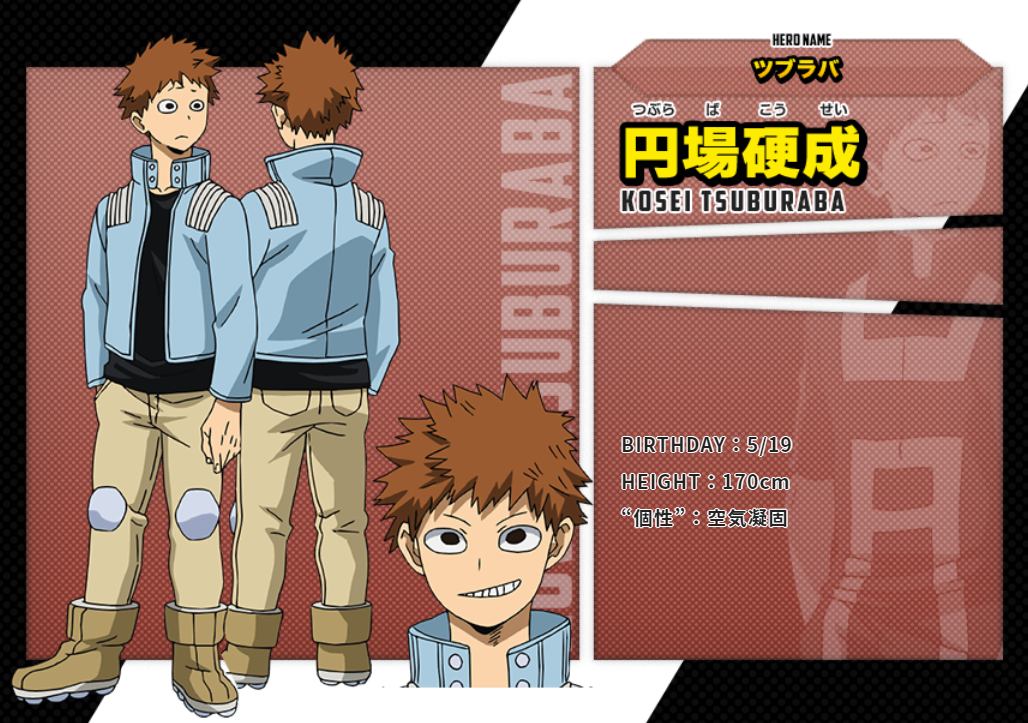 Kosei Tsuburaba’s quirk is called Solid Air. It gives him the ability to solidify the very air he breathes.

He can create any number of invisible walls or platforms. He is only limited by his lung capacity. 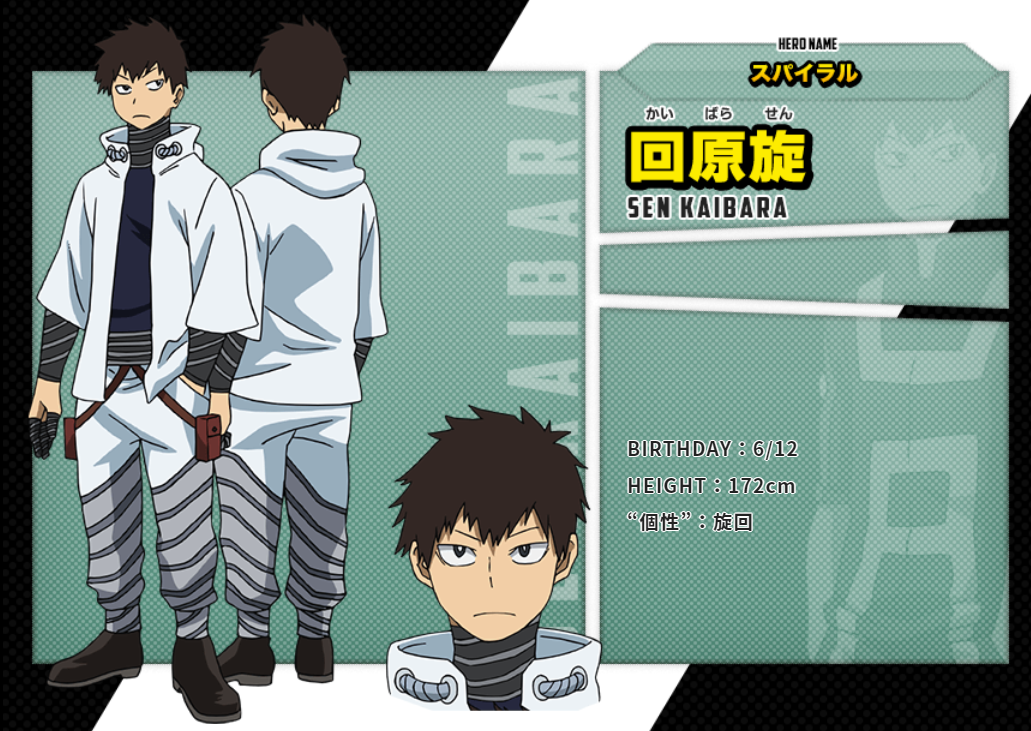 Sen Kaibara’s quirk is called Gyrate. It gives him the ability to rotate any part of his body like a drill. 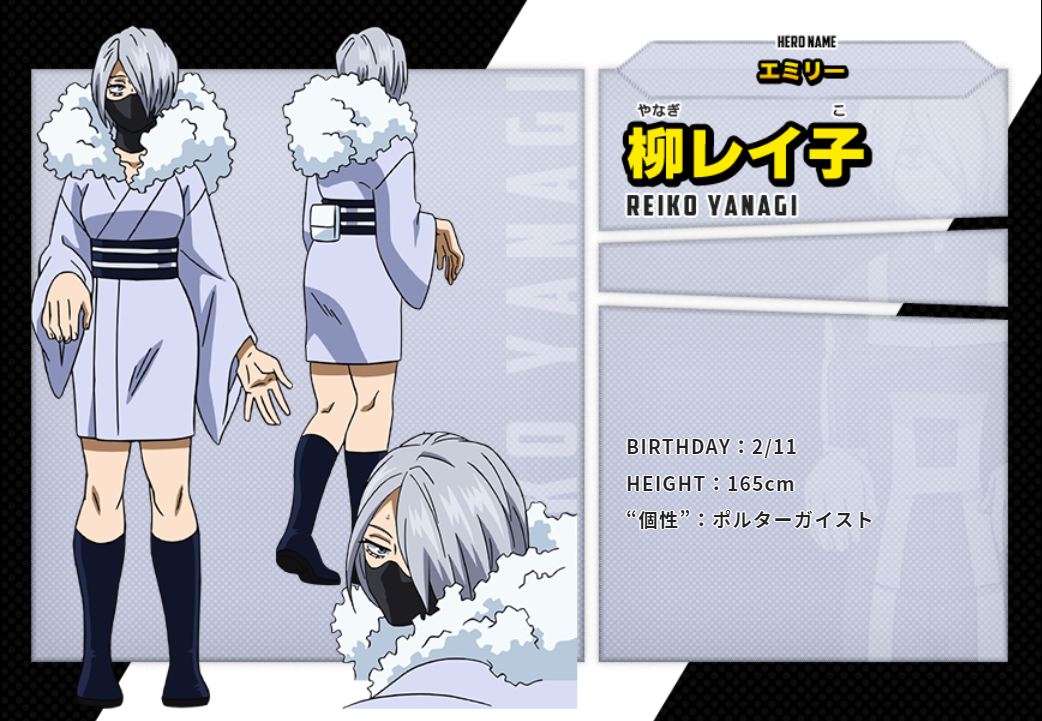 Reiko Yanagi’s quirk is called Poltergeist. With Poltergeist she’s able to control nearby objects with telekinesis. 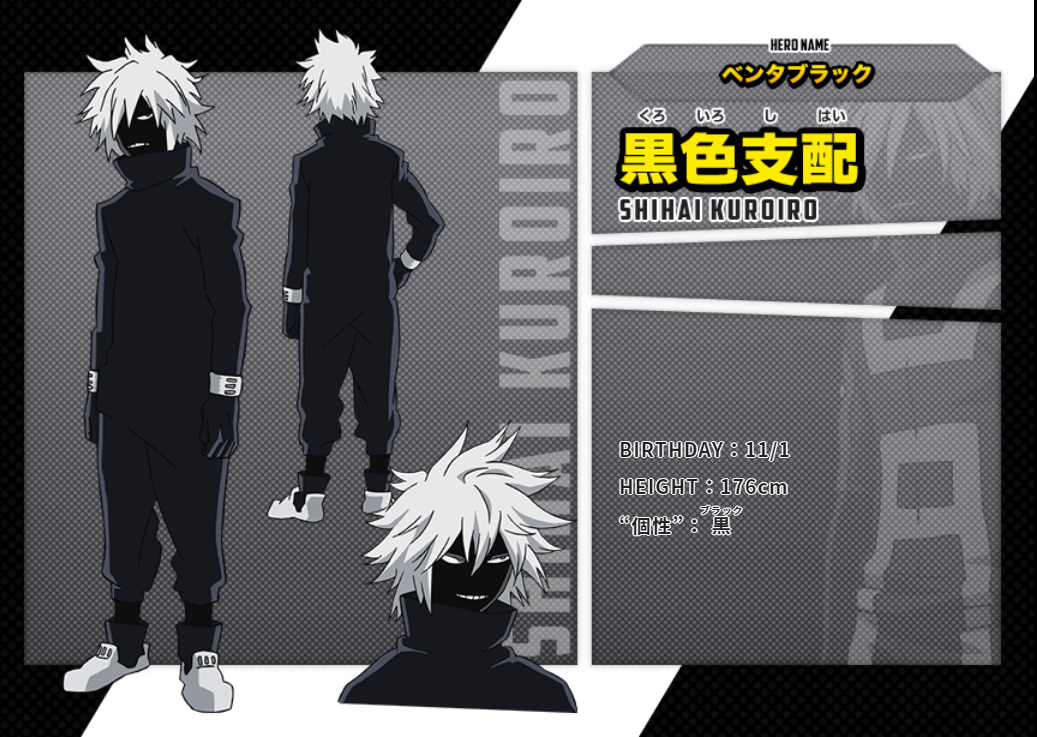 His quirk allows him to merge his body into anything that is dark in color. It does not matter whether it’s a naturally dark object or is created through external means such as a shadow.

He also has the ability to move the black things he merges into, similar to possessing them. However, at this point, those objects have to be capable of moving. 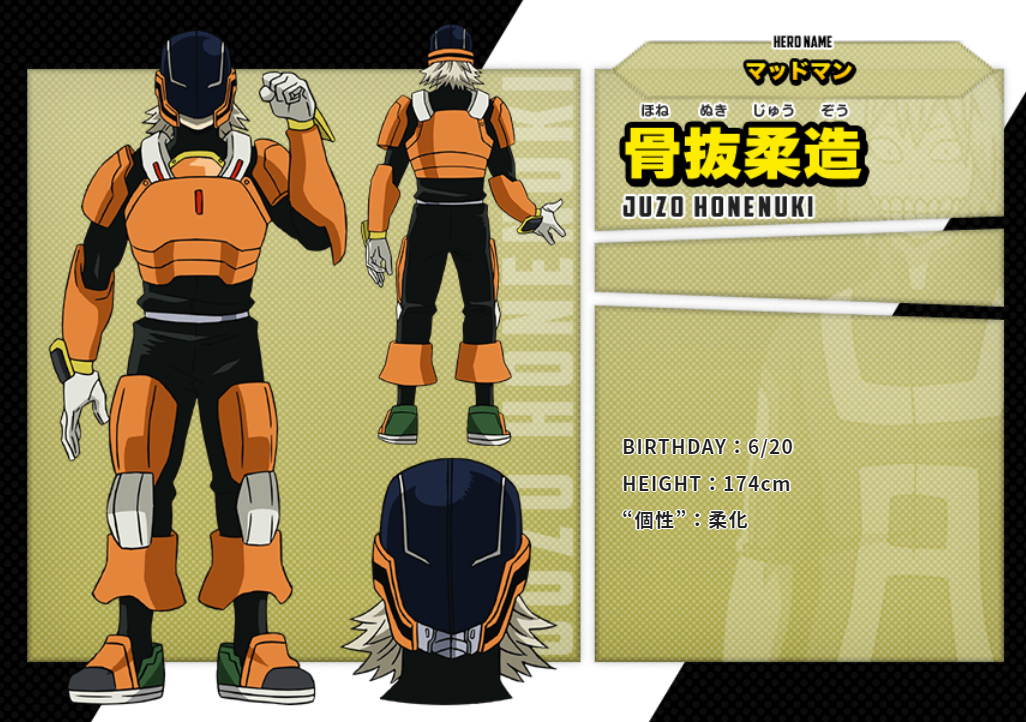 Juzo Honenuki’s quirk is called Softening. It gives him the ability to soften non-living objects he touches. Upon touching the object a second time, he is able to restore it to its original state.

He’s also able to use his body to swim through objects he has softened. 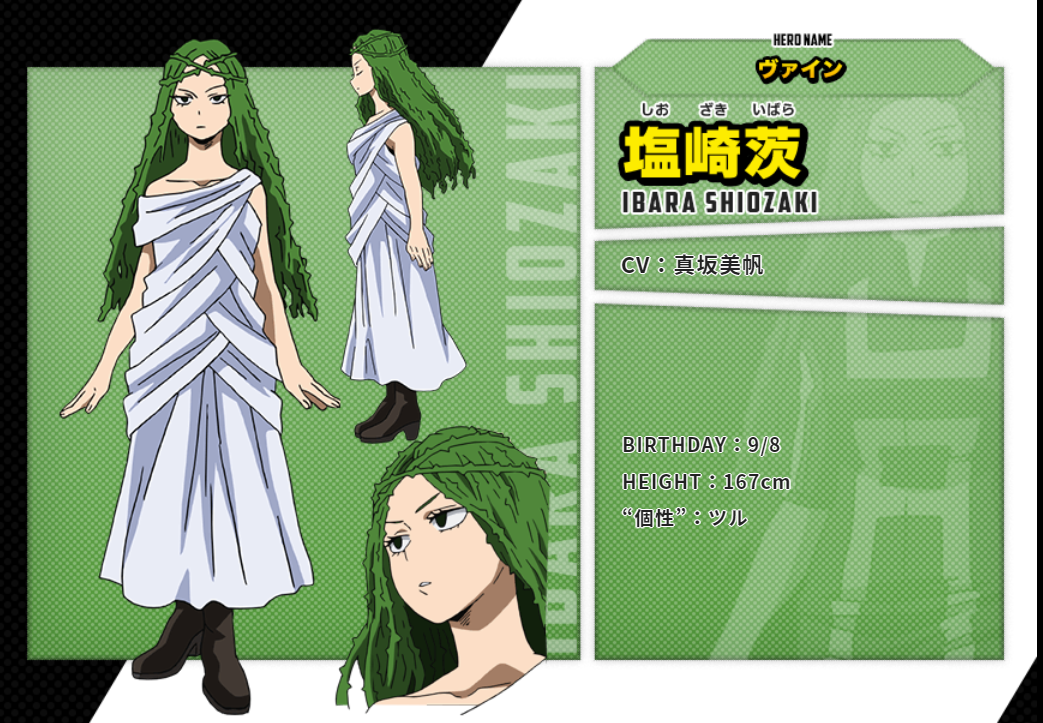 Ibara Shiozaki’s quirk is called Vines. The Quirk gives her the hair-like vines that grow on her head. She is able to manipulate the vines, using them to attack or defend.

She can also detach the vines at will. If her vines are destroyed, they will eventually grow back if given the proper sunlight and water. 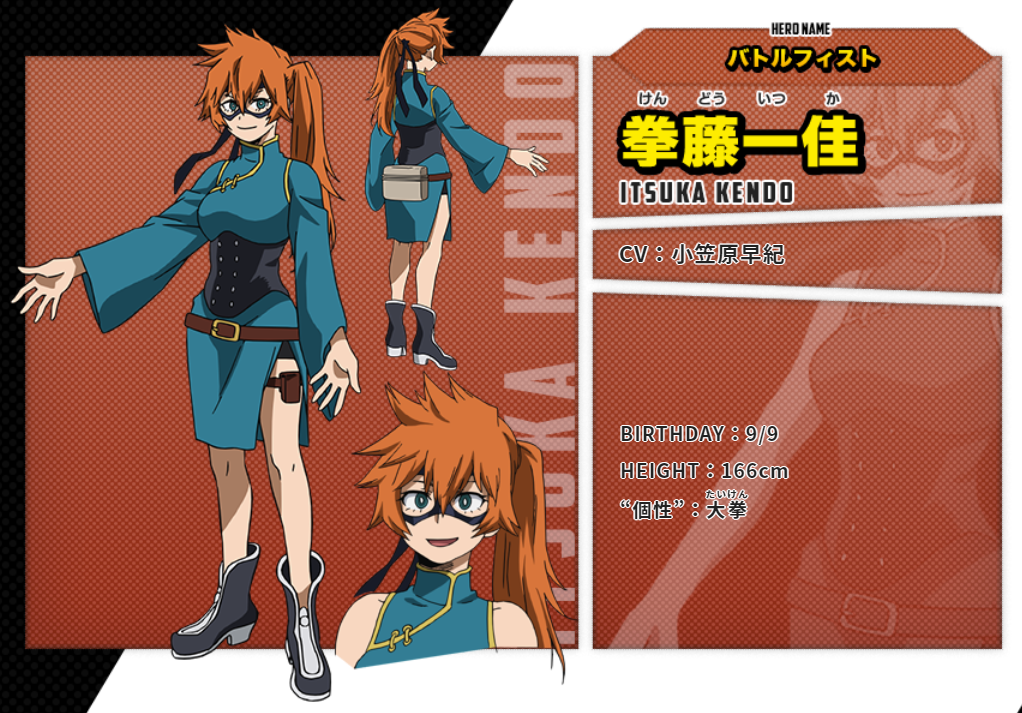 Itsuka Kendo has the Big Fist quirk. This quirk allows her to enlarge both her hands to enormous sizes. As her hands get bigger so does her striking and grip power. 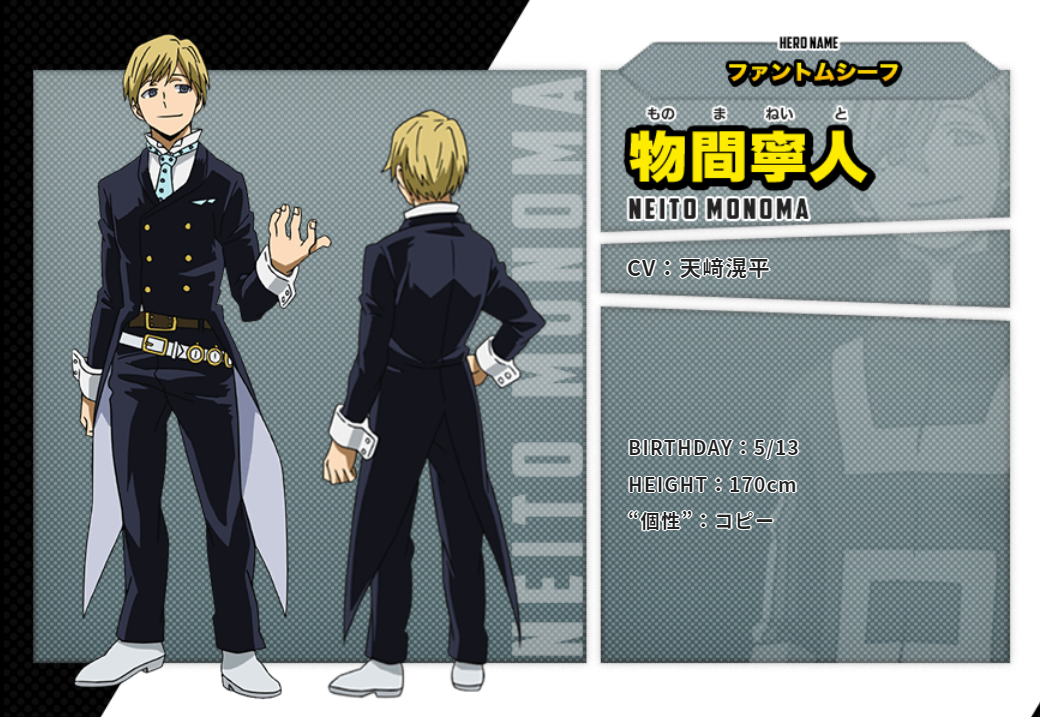 Neito Monoma’s quirk is called Copy. It allows him to duplicate another person’s quirk after physically touching them. He is able to hold up to four quirks at the same time and use any copied power for up to 10 minutes.

He is unable to use quirks at the same time. But he can use any quirk he acquires however he wants to. While he can acquire any quirk, his use of the quirk is still reliant on his own physical training. 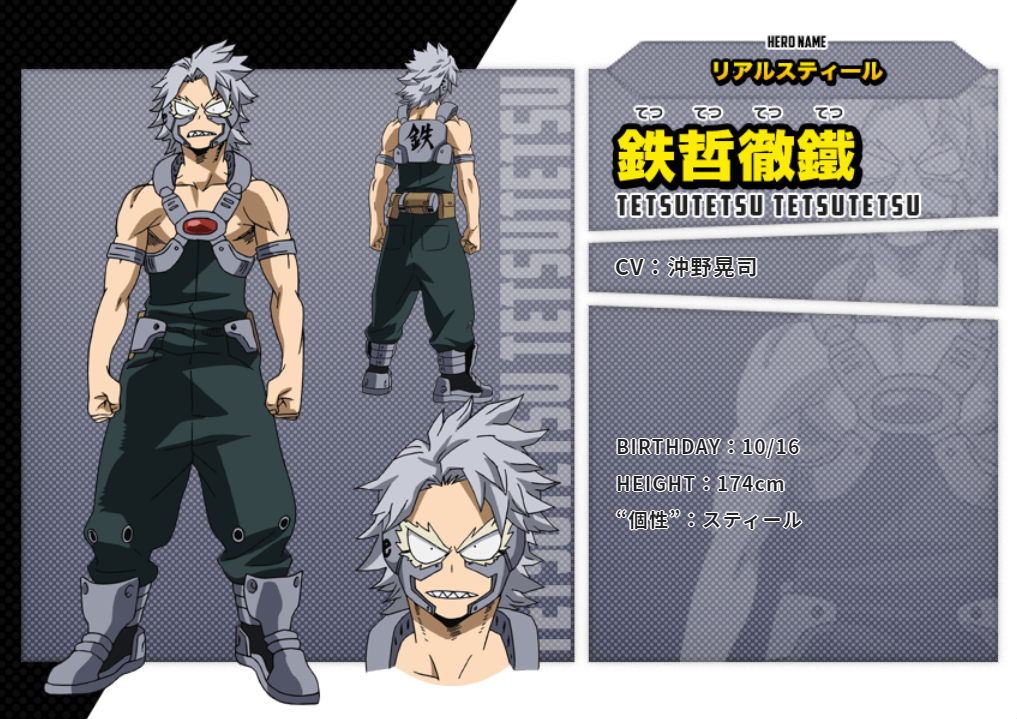 Tetsutetsu Tetsutetsu’s quirk is called Steel. It grants him the ability to turn his body into steel. In his steel form he gains increased defensive abilities as well as augmenting his physical attacks.

His quirk’s strength is reliant on the amount of iron in his diet. His form will also lose durability if Tetsutetsu begins suffering from iron fatigue and maintains the form for too long.

His transformation also makes him vulnerable to magnetism abilities and he can be melted if the temperatures are high enough. 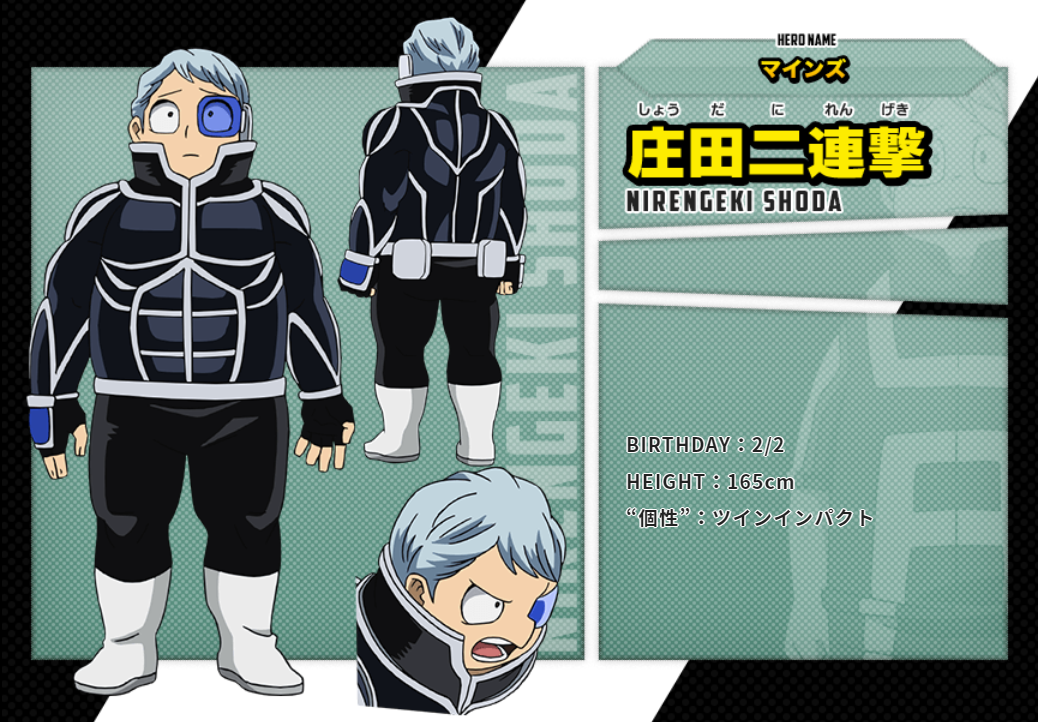 Twin Impact is activated when Shoda strikes a target. He is able to then make a second strike at the point of impact that is multiple times stronger than the initial blow. 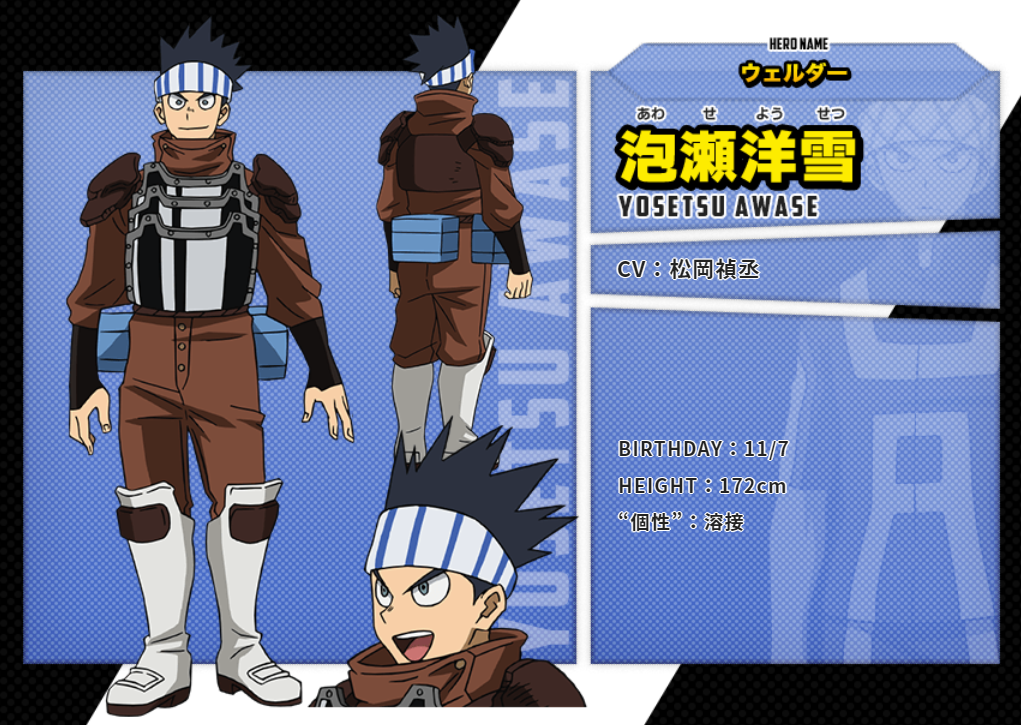 Last, but not least is Yosetsu Awase. His quirk is called Weld.

Weld allows him to fuse objects together at the microscopic even atomic level. He only needs to be touching both objects in order to fuse them. He is able to fuse both organic and inorganic objects.

My Hero Academia’s fifth season will debut on March 27th.

What do you make of Class 1-B’s hero outfits? Which student from Class 1-B are you looking forward to seeing in action?