Gina Carano has officially been dropped by her representative agency and PR firm following her recently announced firing from Disney and Lucasfilm.

This development comes in the wake of Gina Carano getting fired from Disney/Lucasfilm, which if you haven’t heard by now, has reported by a number of trade websites, including Variety and Deadline:

“Gina Carano is not currently employed by Lucasfilm and there are no plans for her to be in the future. Nevertheless, her social media posts denigrating people based on their cultural and religious identities are abhorrent and unacceptable.”

It now looks like her representative agency, United Talent Agency, as well as public relations firm ID PR, have dropped Gina Carano as a client in light of Lucasfilm’s decision.

As reported by Deadline,”The former MMA fighter turned actress is no longer with her agency UTA, a spokesperson confirmed to Deadline tonight.” The Wrap simultaneously reported that “ID PR also no longer represents Carano.”

Currently there are three other major agencies in Hollywood aside from UTA: Creative Artists Agency, Endeavor, and ICM Partners. Gatekeepers for any work in tinsel town, these organizations represent a number of creatives such as Don Cheadle, Jim Carrey, and Dave Chappelle, and serve as facilitators for their clients’ careers in the industry.

UTA’s decision to drop Carano from their ranks is just the tip of the iceberg for the now-former Star Wars actress, as not only does put a bit of a black mark on her record when being considered for future Hollywood projects, but they may have effectively cut her off from any future opportunities from working in Hollywood.

We talk about the Carano’s Instagram story on Bounding Into Comics The Daily Stupid:

Carano’s firing may have already been decided by Disney executives well before it was publicly announced, as Deadline reporter Anthony D’Alessandro writes that while “Disney+ had plans for Mandalorian spinoffs including Rangers of the New Republic,” he “had been told when news was leaking back in the fall about that latter series that a deal wasn’t in place for Carano.”

This theory is supported by a tweet from THR writer Aaron Couch, who reported, “According to sources, Lucasfilm planned to unveil Gina Carano as the star of her own show during December’s investors day. They scrubbed those plans after erratic tweets in November” 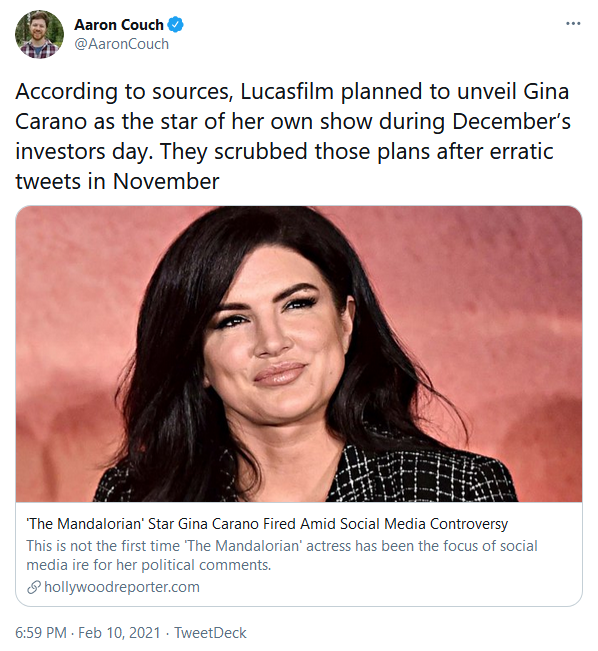 The ‘November’ tweet in question can be seen below: 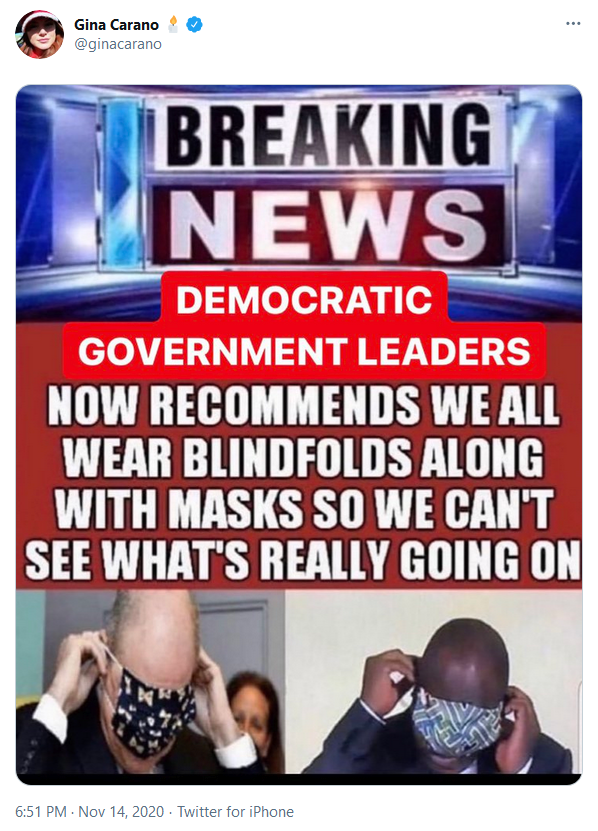 There has been a lot of dialogue going back and forth about Carano over the year, both in support or and in denunciation of her tweets and social media posts. In weeks prior to this decision by Lucasfilm, fans of Carano had gotten#WeLoveCaraDune to trend on Twitter for an entire day. Meanwhile, the opposition continues to push the hashtag #FireGinaCarano whenever Carano posts something they take offense to.

What do you think about Gina Carano’s two agencies dropping her from representation? What do you believe it does for her future work in the Hollywood industry? Sound off in the comments below or let’s talk about it on social media!