YouTuber Nerdrotic took to Twitter and YouTube to call out British website The Independent and their writer Annabel Nugent for publishing a lie about Gina Carano.

Nugent, in her article titled, “Gina Carano says she found out about her exit from The Mandalorian through social media ‘like everyone else’ claims that Carano called for a boycott against Disney and their Disney+ streaming service.

The writer stated, “Following the news, fans of Carano called for a boycott of Disney’s streaming service using the hashtag #CancelDisneyPlus. However, the request was largely mocked online.”

YouTuber Nerdrotic posted to Twitter, “This is a lie, are you going to retract it? Annabel Nugent. For your information it was a YouTuber that called for it. Not Gina. #WeLoveGinaCarano #CancelDisneyPlus. 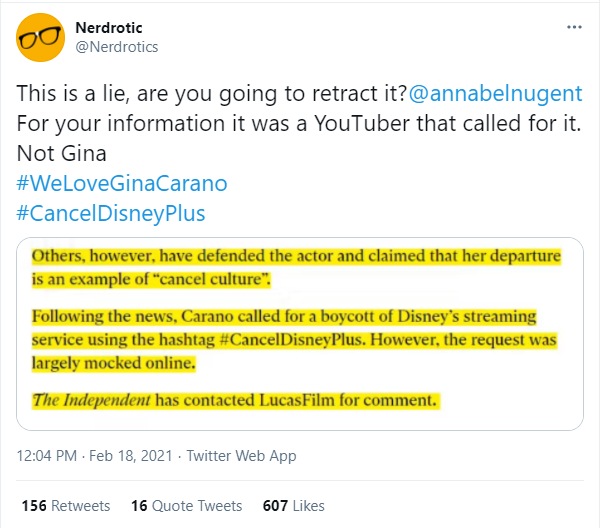 He would further discuss it on his livestream.

The last post where Carano even used a hashtag was back on February 9th before Disney smeared Carano when they announced she had been fired.

She wrote, “Have you checked out #TheTrumanShow recently? ‘You never had a camera in my head!'” 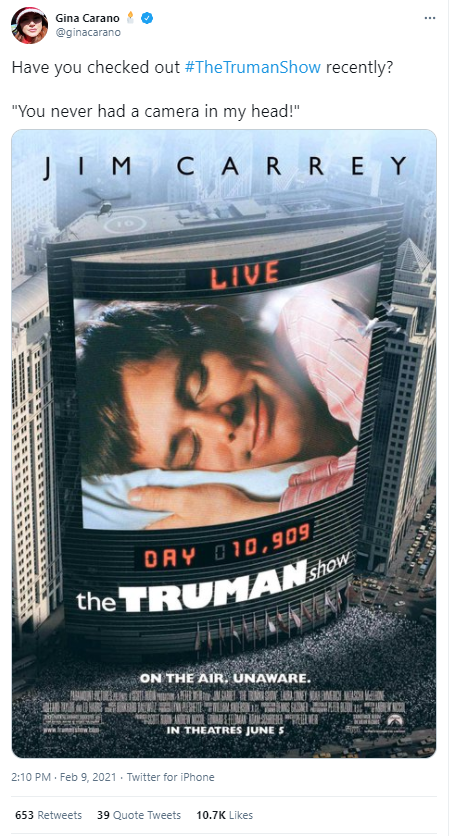 As for the origin of the #CancelDisneyPlus hashtag, two Twitter users began using it on February 10th.

One America News Network host Jack Posobiec would later tweet out the hashtag following Disney’s announcement that Carano had been fired. He simply posted, “#CancelDisneyPlus.”

He would later write, “Stop giving money to people who hate you #CancelDisneyPlus.”

The hashtag would then go viral and trend #1 as reported by YouTuber Tim Pool.

After getting called out by Nerdrotic on Twitter, Nugent would reply saying she made an error and the article had been updated.

It has been updated, but it still pushes the lie that the hashtag was “largely mocked online.”

As noted above the article was trending #1 and most of the people using the hashtag were not mocking, but were indeed calling for people to cancel their subscriptions to Disney+.

What do you make of Nugent’s outright lie in the article and then the claim that the article had been updated yet it hasn’t been?

**Editor’s Note: This article was updated to reflect that The Independent did indeed update the article and fixed their claim that Carano called for a boycott. However, they still maintained the lie that the hashtag was “largely mocked.”**