Last November, a number of entertainment news outlets reported that writer Nadria Tucker had been let go from the Superman & Lois writers room during the production of the show’s first season.

But did the firing of the now-former Superman & Lois writer actually have that large of an effect on the show’s writing? Not really, as Tucker has revealed that she actually finished out the first season of the show. 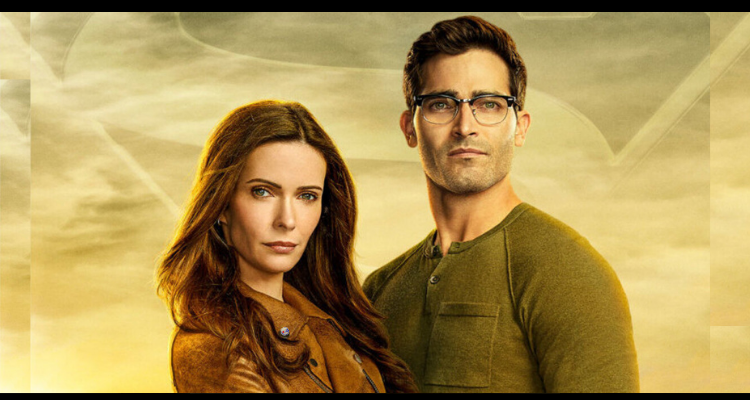 Tucker’s dismissal from the writer’s room was announced last year amidst the still-ongoing coronavirus pandemic. It goes without saying that the pandemic put a strain on Hollywood, as a staggering amount of regulations were put on studios who wished to continue filming  and a number of productions found themselves cut due to COVID-19 related restrictions and social distancing.

Announcing her departure on Twitter, Tucker noted at the time that she had spent months “flagging #metoo jokes in dialogue.” 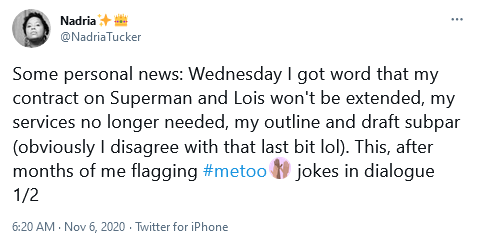 Though it’s possible that she was let go because she wasn’t that great at writing, that possibility is not an idea that Tucker herself is apparently willing to entertain, as she defended her role in the writer’s room by asserting that she was simply “defending the Bechdel test,” “FIGHTING to ensure the only Black faces on screen aren’t villains”, and “pitching stories for female characters (there’s one in the title of the series!) that went ignored.”

“If I sound bitter,” said Tucker, “it’s because this one stings.”

Despite this, the females in this show had agency, were important voices to the decisions being made, and were, in many cases, the ones making decisions. This isn’t a show about a female sharing powers with the super-powered character of the show, but rather s a show about getting a family getting back to basics in a small town with localized concerns. 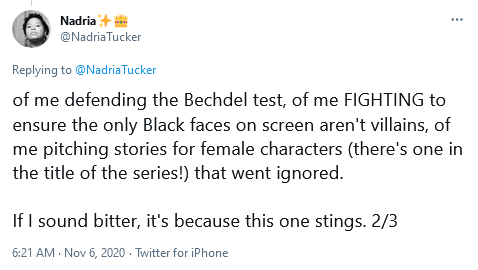 Tucker further asserted that colleagues had assured her that she “was great in the [writer’s] room, so I know I’m not nuts” and also  “debated whether to post this but my own mental wellbeing demands that I do. The only way sh*t changes is to expose it. /end.” 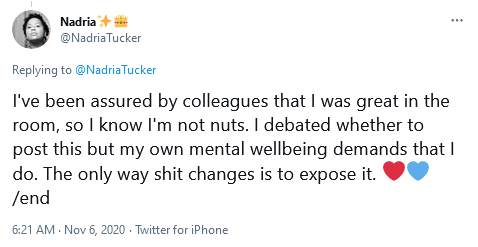 Much of what she said didn’t really catch a ton of momentum, as many had already written off the show based on Superman’s depiction in both the 2nd season of Supergirl and the Crisis on Infinite Earths crossover and the already staggering amount of criticisms levelled against the writing for CW shows as a whole. Given these many issues with Tyler Hoechlin’s introduction to the CWverse, there was a pretty low bar for audiences going in to the show. 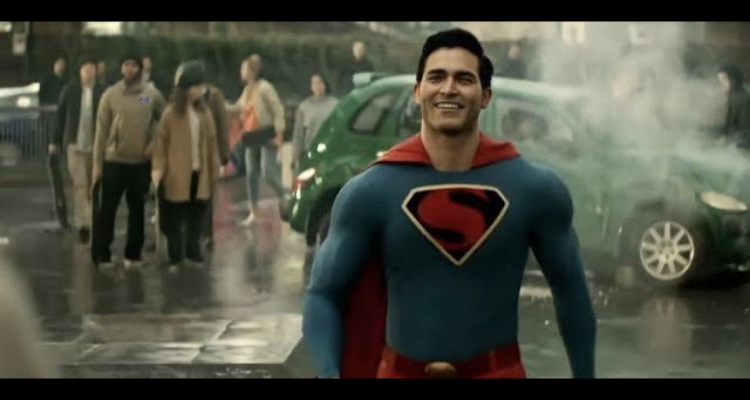 Yet, in spite of her absence, Superman & Lois premiered on The CW to glowing reviews from a wide range of audiences, including ‘normies’ and a number of critics who had been disappointed with much of the network’s recent super hero-related out put.

The first episode premiered to strong viewership numbers, and word of mouth seems to only be helping it in as more audiences turn to view it on The CW website. The aesthetics of Hoechlin’s suit, the cinematic feel of the show, and what looks to be a sizeable budget put out for the action scenes really put a strong foot forward.

However, prior to the series’ premiere, Tucker took to Twitter to remind her audience that she had “worked on all 15 (not just 13) episodes,” adding that “the writers’ room notes show that.” 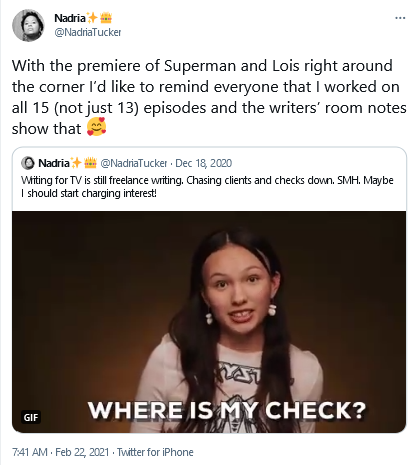 On the day of Superman & Lois’ debut, Nadria once again expressed her frustrations with the show on Twitter, tweeting “It’s premiere day for the most recent project I worked on and I’d love to be excited! But nah.” 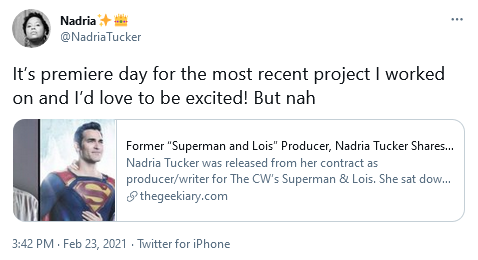 “Not excited. Just pissed!” she added. 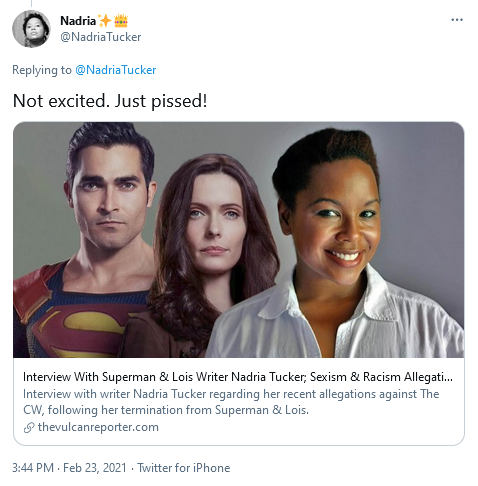 Amidst the audience excitement, Tucker shared her thoughts on the series’ pilot episode, live-tweeting the premiere throughout its airing.

“We had lots of discussions in the early days about mental illness and how to depict it in the show,” wrote Tucker. “We talk about race too.” Tucker also noted that the writer’s room discussed gender and sexuality, while also finding time to pitch a number of “blue sky” ideas which eventually found their way to the pilot. 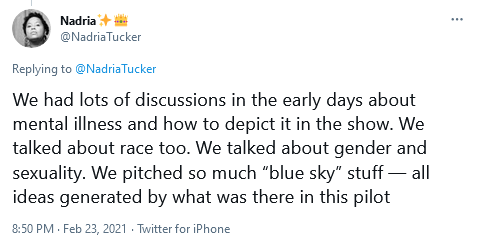 ‘Blue sky’ refers to making impractical or unachievable plans that will not immediately have any pay off or achievement. And, as any good show will attempt to do, we did get a lot of that in the pilot episode, with the season being set up to see a larger goal, a bigger enemy, and an unraveling mystery centered around the main characters.

Tucker further discovered that the series’ casting did not turn out as she wanted, despite her voicing her concerns regarding diversity. 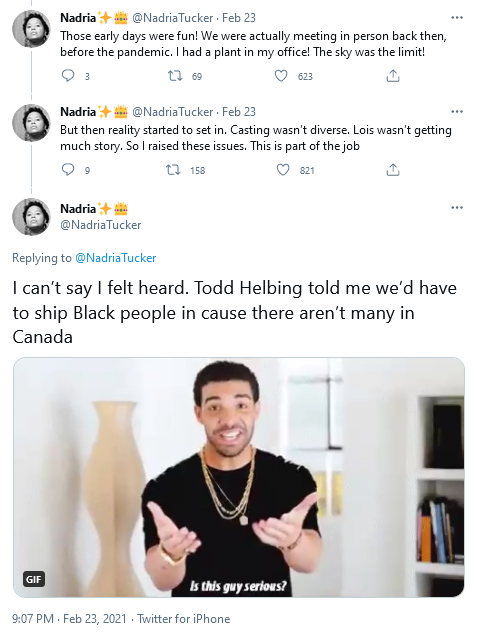 She then complains that story lines surrounding Lois’ journalism “were frequently deemed ‘boring'” – most likely because the current atmosphere of the fourth estate is about clicks and controversies rather than doing real investigative work, asking tough questions, and holding other institutes of power and influence accountable – and speculates that it was “because they lacked superpowers.”

“Anyway the pilot hasn’t changed much since the last time I read it,” Tucker concluded at the end of her viewing. “I’m sure the rest of the series will be more of the same.”

It’s refreshing to know from a writer for the show that what we saw in that pilot will continue for the rest of the season, a fact that will be a be a huge plus for skeptical fans of The CW’s writing who enjoyed Superman & Lois’ premiere. 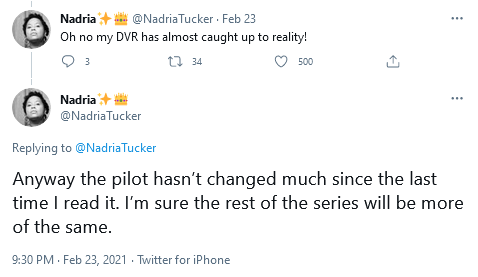 The Storm Rolls In

The day after the premiere, Tucker once again spoke to the issue of diversity within the series, informing her Twitter followers that she “wasn’t the only POC or femme writer on Superman and Lois” and noted that “whatever amount of representation you see on screen are hard fought wins from some very talented people despite everything else.”

One user would question the validity of her claims writing, “there are some who will blindly believe/follow without any evidence/proof… maybe that’s what Miss Nadria, similar to Ray Fisher, is counting on.”

“Now I’m responding to their lack of response,” she concluded.  “I owe this hellsite nothing.” 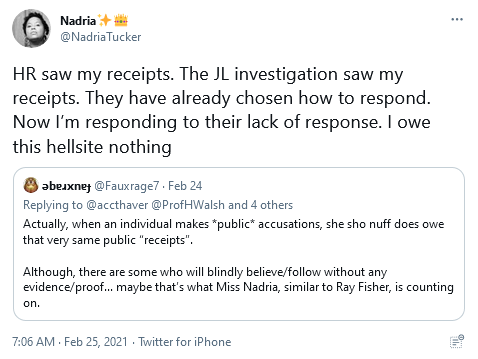 Suddenly, taking notice of her mention of the independent Justice League investigation launched in response to actor Ray Fisher’s claims of abuse by Warner Bros. executives during the film’s reshoots, Fisher himself retweeted Tucker’s above declaration and stated “The fact that so many participants of @WarnerMedia’s Justice League investigation are having to out themselves in order for abusers of power to be held accountable is disgraceful.”

“@NadriaTucker must be heard and protected,” wrote Fisher. “Pass it on!” 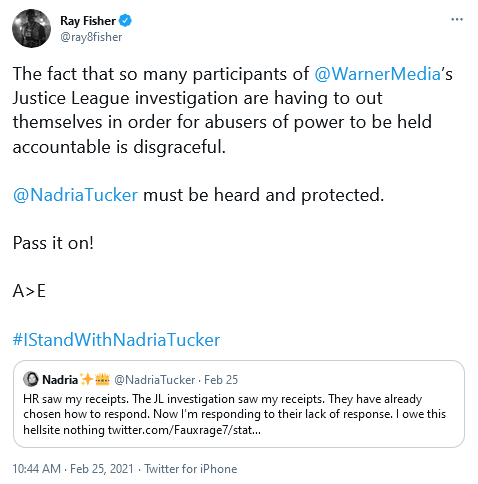 It appears that Tucker not only raised issues with the Superman and Lois script, but that she has also been involved in the investigation into Walter Hamada, Geoff Johns, and DC leadership. 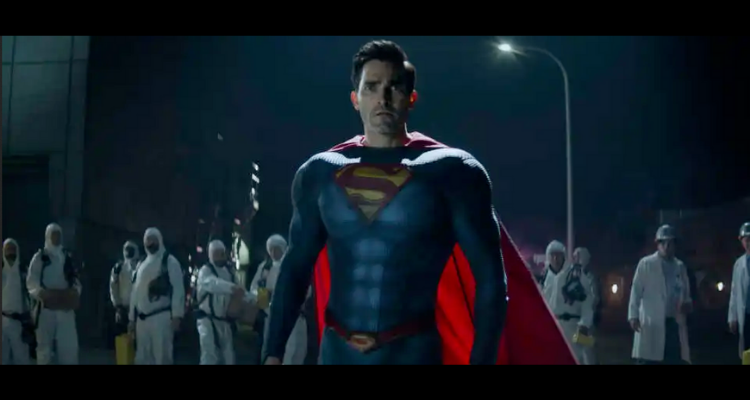 What Everyone Is Talking About

With that, the hashtag #IStandWithNadriaTucker ended up trending shortly after the premiere of Superman and Lois, which might’ve diminished some of the positivity the show earned with its strong first outing.

And along with any of that positivity associated with the first episode being flushed away, there is also a danger for any possible second season to fall into The CW rut. That same issue Arrow had in its later seasons and what Flash had after its first season.

The issue now is that everything that is favorable about the show seems to be working against the current agenda and narrative of Hollywood, not to mention the current zeitgeist of gender/racial politics. 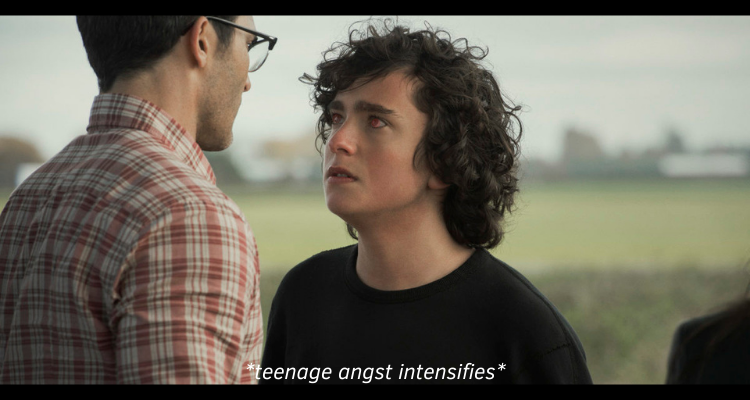 What we have now is a show that’s being allowed to create and tell a good story. But on the horizon is the threat of the mob, ever bogging creatives down with the requirements of a culture looking to insert their own preferences about what’s what into any given piece of media.

Add to that the normal modus operandi of the CW, and the odds are already worryingly stacked against Superman & Lois. 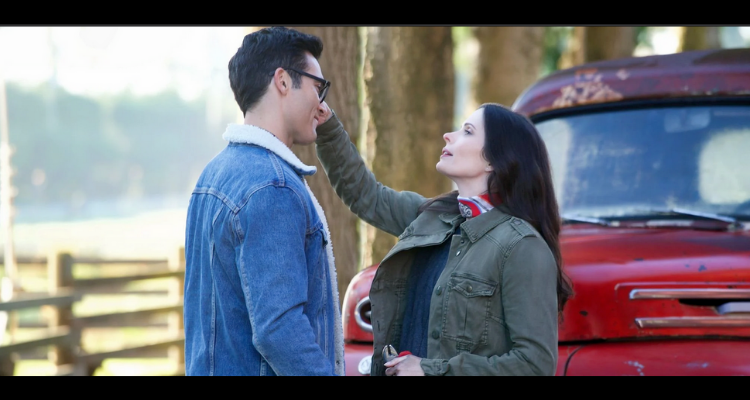 Additionally, Tucker has reteweeted the announcement of WB/DC’s move to produce a J.J. Abrams and Ta-Nehisi Coates Superman reboot.

Summarily, a diversity-filled, representation-focused, gender-politicked Superman property will most likely define all future iterations of the character. As such, the one we are getting in this season of Superman and Lois may be an aberration. A fluke. An outlier quickly addressed and reproved. Enjoy it while it lasts. 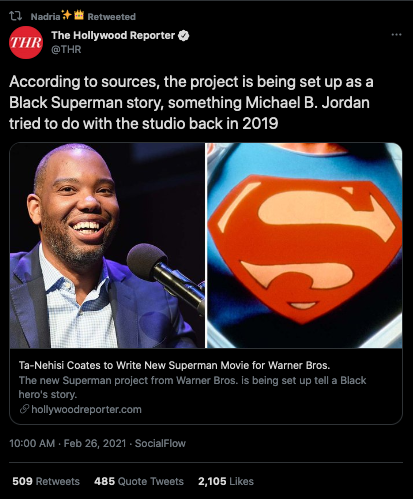 As per usual for any show no longer needing writers, they are let go to find other work, as seen with how Dana Schwartz was taken off from the writing team at She-Hulk for the Disney Plus show well before the premiere. So it should go without saying that writing staff for a CW show should expect a bit of the same.

But what do you make of this Nadria Tucker situation? What are we looking forward to in the future of any Superman property? Sound off in the comments below or let’s talk about it on social media!