Star Trek actor George Takei recently reacted to news headlines about the murder of eight people in the Atlanta, Georgia area, and blamed them on Republicans.

Takei reacted to the news on Twitter where he wrote, “Call a hate crime what it is. And GOP leaders, stop fanning violence with anti-Asian rhetoric. You should be ashamed at what you have unleashed.” 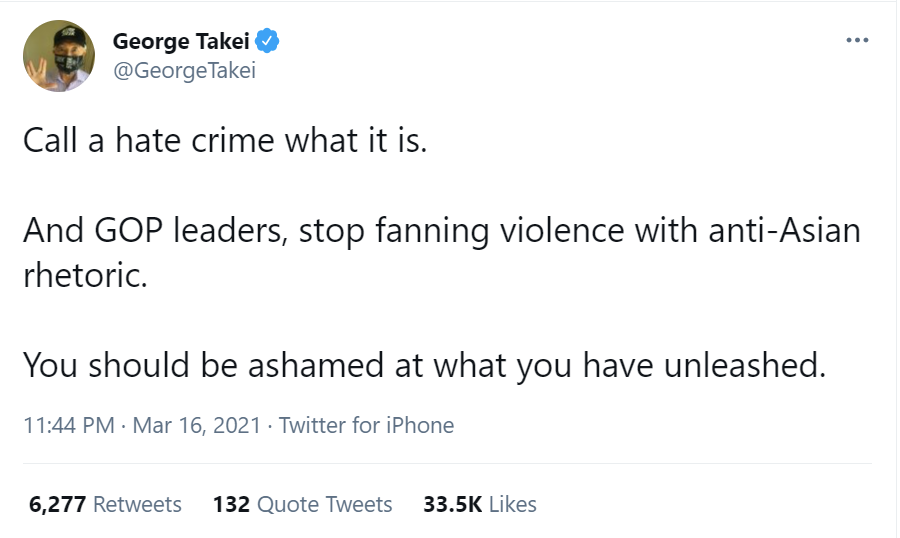 In a follow-up tweet he added, “Three days ago, the leader of the House GOP called it the ‘China Virus’ again. Words have consequences, especially those from our leaders.”

He then added, “Reporters: Ask politicians who trade in racism if they feel responsible or remorseful for violence committed in the wake of their words.” 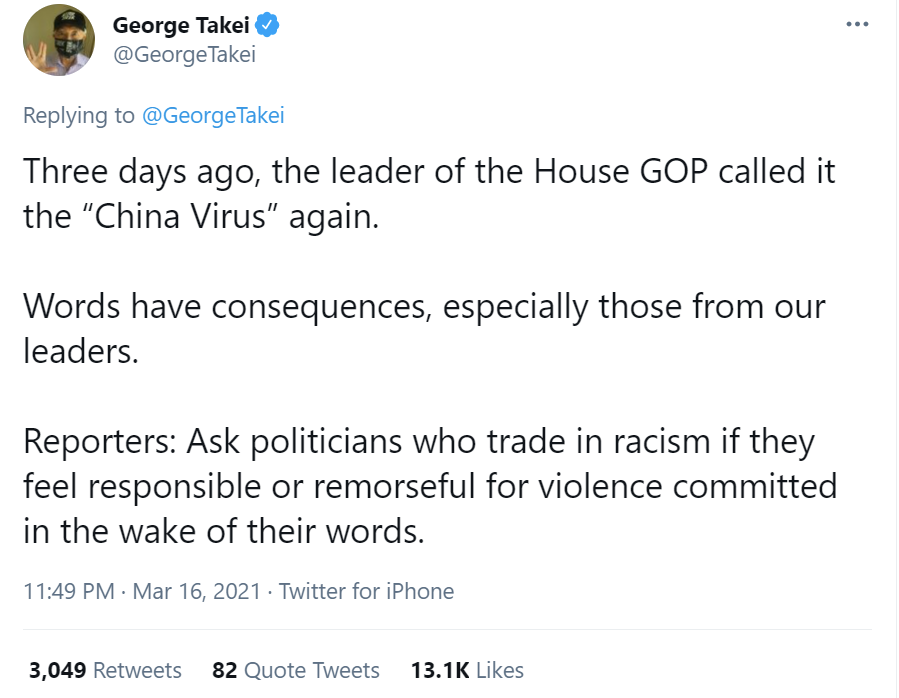 However, in a press conference today, Atlanta Police Chief Rodney Bryant addressed whether the murders were racially motivated.

“And so with that being said, I just wanted to make sure that I know that that is going to be a concern, and that you are probably asking that of many of us, we are just not there as of yet,” Bryant added.

In the same press conference, Captain Jay Baker of the Cherokee County Sheriff’s Office provided details on their questioning of the suspect.

He stated, “The suspect did take responsibility for the shootings. He said that early on once we began the interviews with him.”

Baker continued, “He claims that these, and as the chief said we know this is still early, but he does claim that it was not racially motivated. He apparently has an issue. What he considers a sex addiction and sees these locations as something that allows him to go to these places. And its a temptation for him that he wanted to eliminate.”

The Captain concluded, “Like I said, it’s still early on, but those were comments that he made.” 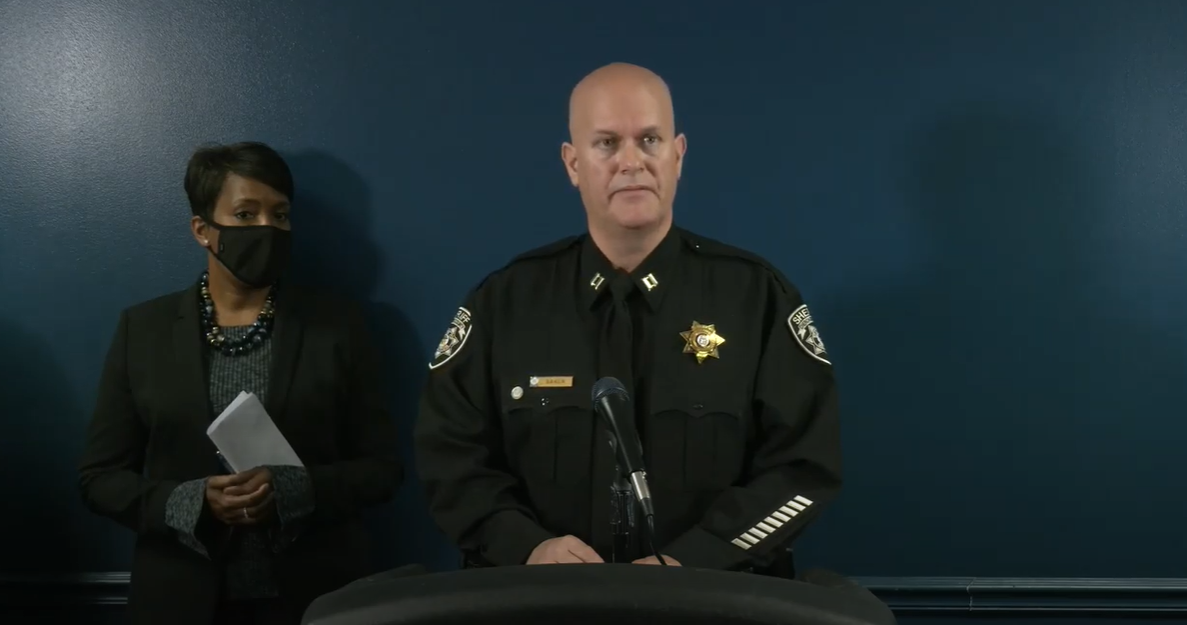 When asked about possible political motivations, he stated, “Nothing political. I’ve heard nothing about politics.”

Baker did detail that the suspect’s family aided in Long’s apprehension and arrest.

He explained, “We put out an image of a possible suspect very early on. And we were notified by his family who were fully cooperative and we are greatly appreciative of their assistance in this matter.” 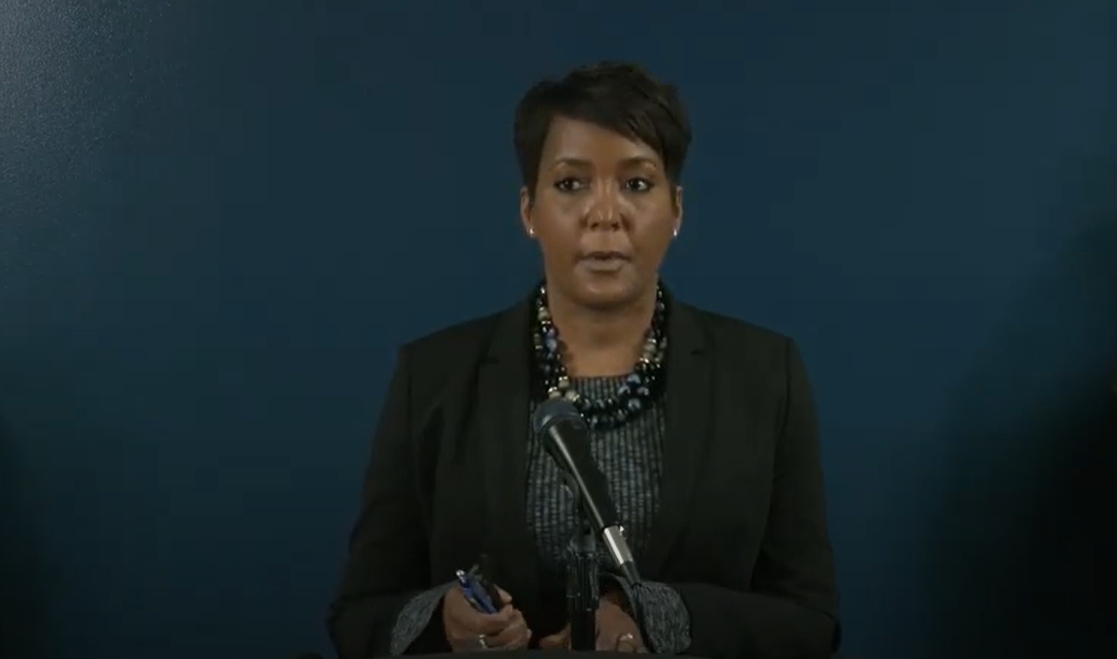 The Mayor of Atlanta Keisha Lance Bottoms would also address whether or not the city would be deploying additional resources to Asian American communities.

While answering this question she stated, “We have not seen a significant uptick in formal complains within the city of Atlanta. But obviously this is a large metropolitan region. And we know that we are hearing the stories. We are seeing them on television, we are seeing on social media so we are certainly aware and we stand ready to provide any additional resources.” 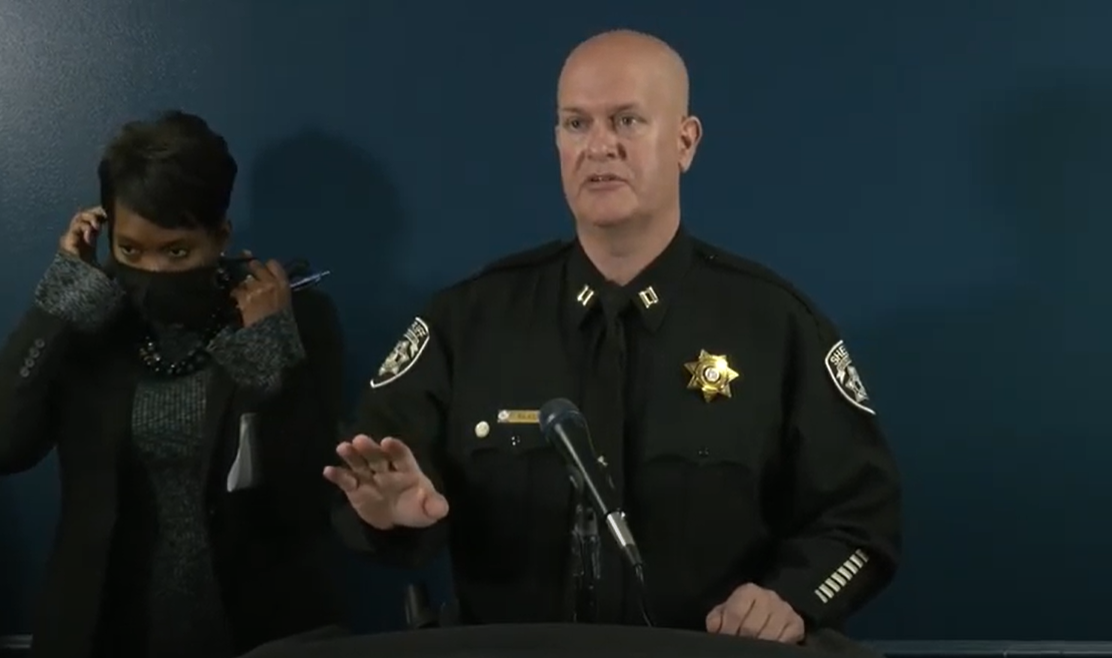 Baker also once again praised the suspect’s family for their cooperation, “We are really appreciative of the family. Without them this would not have happened as well as quickly as it happened. They were very supportive. And certainly this was difficult for them.”

What do you make of Takei’s comments in light of the statements from law enforcement officials in that Atlanta area?