The call of fans for WarnerMedia to restore the Snyderverse is dovetailing into a related campaign to give Joe Manganiello the spotlight he was denied as Deathstroke.

A tag supporting ‘‘#DeathstrokeHBOMax’’ and a fan campaign account bearing the same name started up this past week, hoping to spread interest in their cause, not to mention catch Warner’s attention.

“Tweet about why YOU want to see Deathstroke’s story continue on HBO Max,” the @DeathstrokeHBO account tweeted, adding, “Be sure to use #DeathstrokeHBOMax in ALL tweets and tag @JoeManganiello @hbomax & @jasonkilar.”

They also shared a graphic instructing fans to go to the “SHOWS & MOVIES” section of the feedback hub on HBO Max’s website and demand a Deathstroke project starring Manganiello made for the streaming service. 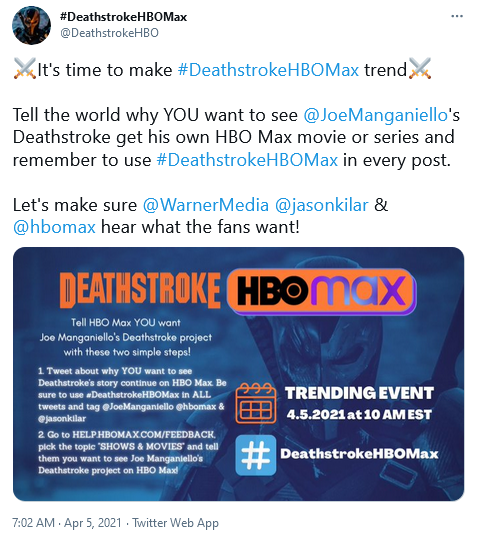 The founding of this account and campaign was most likely inspired by Manganiello himself who, in a case of either being ahead of the curve or an intentional attempt to launch the movement, indicated on Twitter that he would be game for more Deathstroke just a couple of days prior.

Sharing a photo of himself armed and in costume for Snyder Cut reshoots, he used the tags “#RestoreThe SnyderVerse” and “#Deathstroke.” 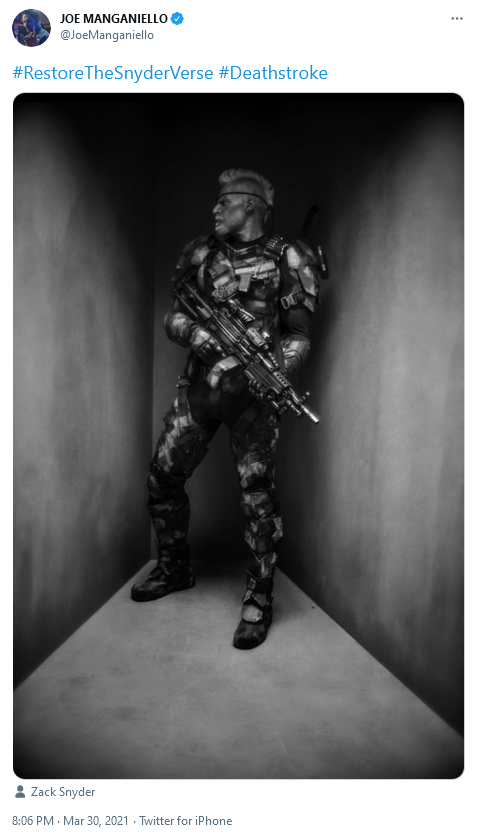 Cast in 2016, Joe Manganiello only played old Slade twice – between two versions of the same movie, no less. His intended introduction, restored in Zack Snyder’s Justice League, would’ve fed into the Ben Affleck-led iteration of The Batman.

However, Warner Bros. had Joss Whedon reshoot and recut the scene into a post-credits stinger teasing a Justice League sequel with the Injustice League or Legion of Doom, which surely isn’t happening ever. 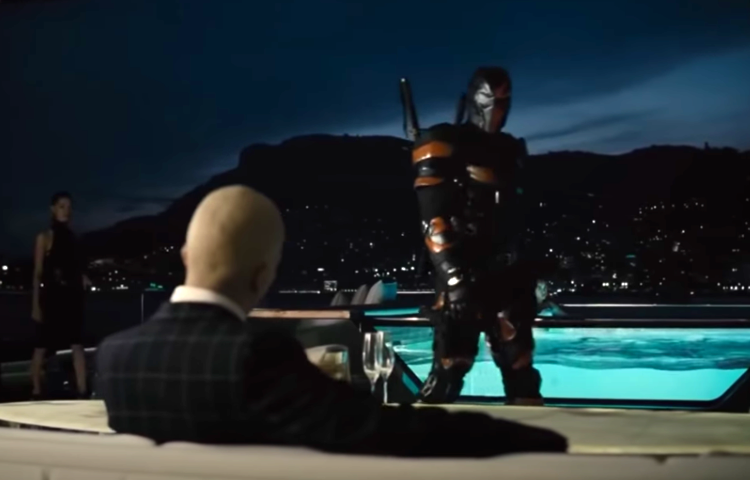 Warner CEO Ann Sarnoff recently stated that the studio’s DC slate will move on from the Snyderverse canon, even though they are hanging onto Jason Momoa as Aquaman, Ezra Miller as The Flash, Gal Gadot’s Wonder Woman, and possibly Amber Heard as Mera – no matter what the fandom thinks of her.

Seemingly, they’ll also hold onto Margot Robbie for Harley Quinn and Jai Courtney in the role of Captain Boomerang. Those two come from Snyder continuity through David Ayer’s Suicide Squad and both are returning for James Gunn’s The Suicide Squad this summer.

Related Rumor: Ben Affleck To Return To Batman For Showdown With Deathstroke

With Deathstroke pitched for the sequel in early script drafts, there ought to be enough room and reason to keep Manganiello around. Plus, if the rumors surrounding Ben Affleck’s continued appearance as Batman on HBO Max proves true and Snyder is given some pocket of the DC Multiverse to play with, the Manganiello just might return as DC’s most ruthless bounty hunter.

What do you make of the Deathstroke HBO campaign? Let us know your thoughts on social media or in the comments down below!