Veteran voice actor Quinton Flynn has been replaced as the voice actor for Kael’thas Sunstrider in World of Warcraft and Henry Cooldown in No More Heroes III after accusations of sexual misconduct were leveled against him by an ex-girlfriend. Accusations which Flynn claims have since been found by a judge to be completely unfounded. 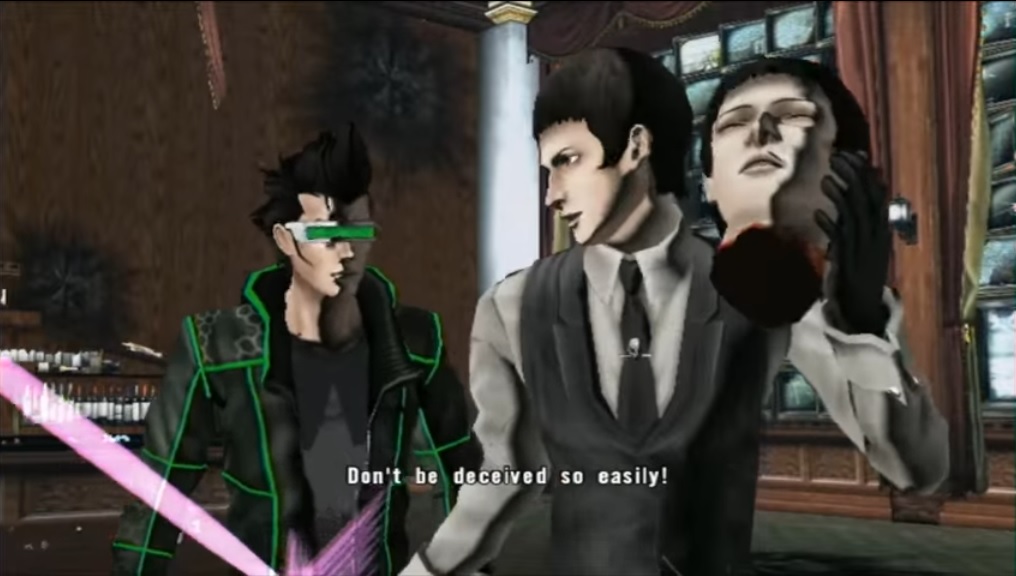 The situation surrounding Flynn began last year, when on November 12th, a newly-created Twitter account named “BEWARE QUINTON FLYNN” began to post accusations that the voice actor was “an absolute creep” who had made unwanted sexual advances towards the account’s owner. 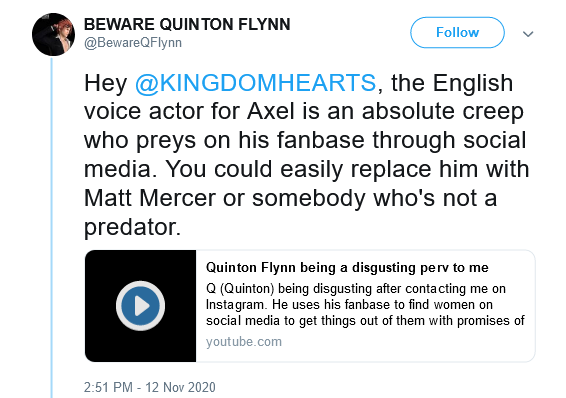 Amidst the account’s numerous tweets decrying Flynn, @BewareQFlynn also shared allegations from other women, including one from a woman named Chloe and another from a woman who claimed that Flynn “did [many] sexually harassing things to me during a convention I was running in front of large groups of people.”

The woman also asserted that Flynn had “straight up licked my thigh in a group photoshoot without any consent or right to among other things which truly disgusts me,” providing @BewareQFlynn with a photo of the thigh-licking incident in question. 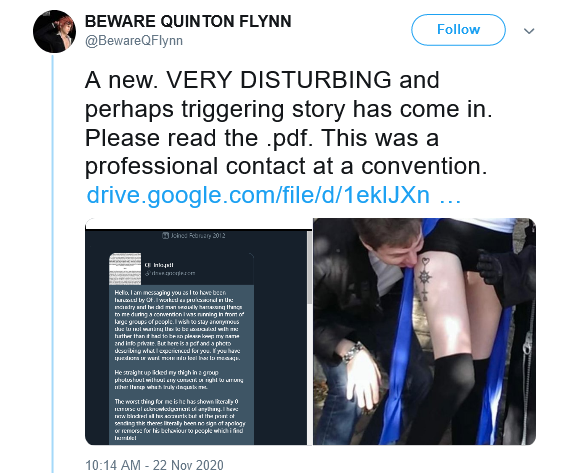 While @BewareQFlynn continued to post their accusations on Twitter in an attempt to make Flynn’s alleged behavior known to everyone from fellow voice actor D.C. Douglas (Resident Evil’s Albert Wesker) to Disney (who employed Flynn through the Kingdom Hearts series), the voice actor took a leave of absence to handle the matter in a court of law.

Unfortunately, it seems that by then the damage had already been done, as Flynn lost two prominent voice acting roles following the surfacing of these accusations.

The first was that of Henry Cooldown, the brother of No More Heroes protagonist Travis Touchdown, as it was revealed on February 17th by series creator Suda 51 that Flynn would be replaced by Mark Allan Stewart (Agents of S.H.I.E.L.D.) in the franchise’s upcoming third entry. 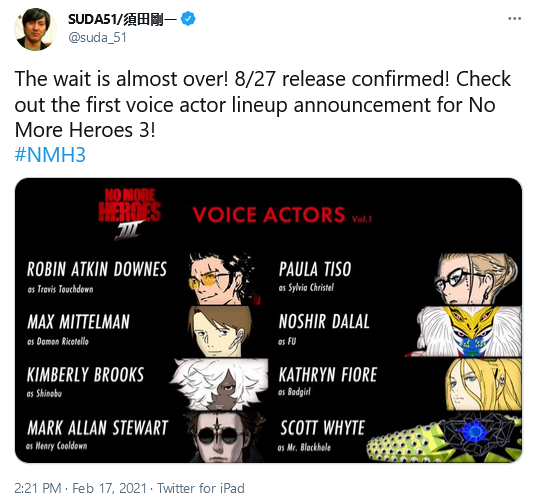 The second was Kael’thas Sunstrider, the once-feared Blood Elf Prince of Quel’Thalas whom Flynn had voiced in both Warcraft III: The Frozen Throne and World of Warcrat’s Burning Crusade expansion.

However, unlike Suda 51, Blizzard did not publicly announce Flynn’s recasting, with players instead discovering the change in voice actors upon the release of the recent 9.1.0 patch for World of Warcraft. In fact, Blizzard’s secrecy regarding the change has been so complete that, as of writing, it is unknown who has replaced Flynn as the voice of Kael’thas Sunstrider.

Though no official statement regarding the matter has yet been provided by either Grasshopper Manufacture or Activision Blizzard, respectively, it has been presumed that Flynn was removed in a knee-jerk reaction to the accusations. 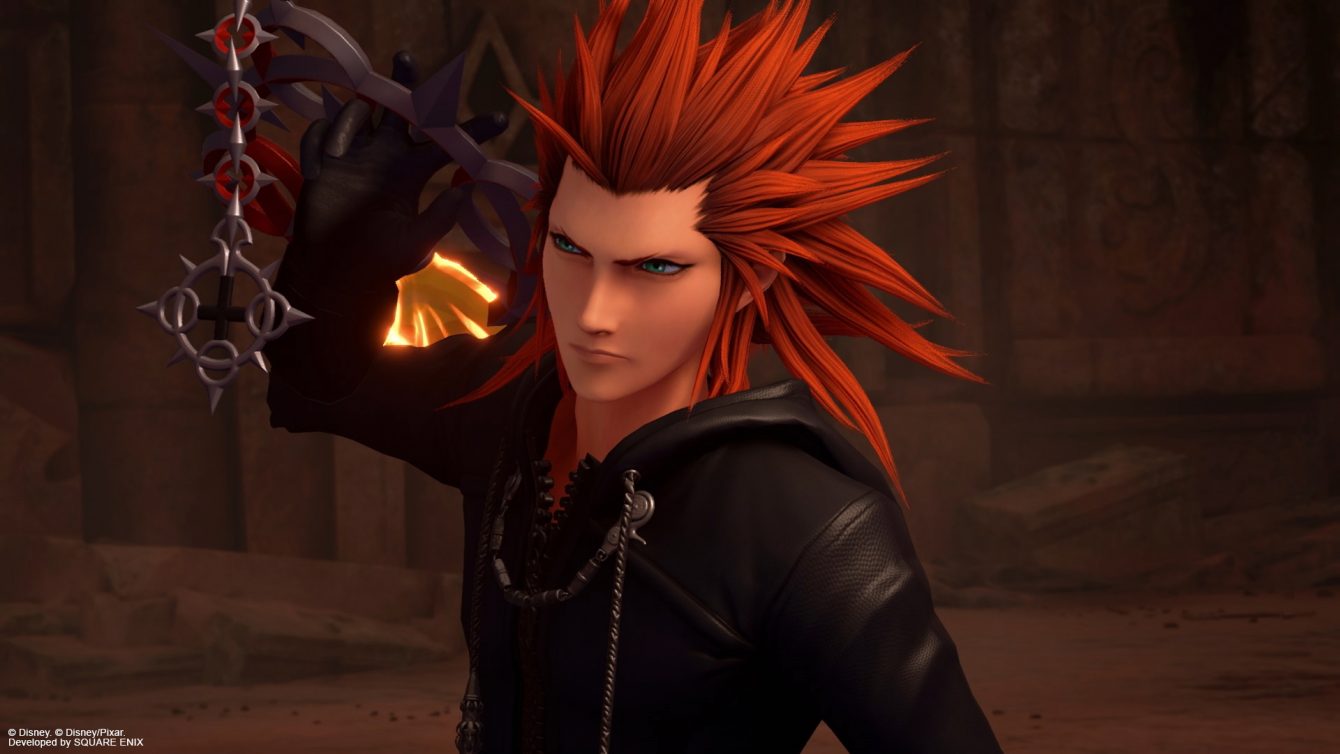 Returning to Twitter on April 19th, Flynn posted a lengthy statement to his personal Twitter account revealing that not only were the accusations against him false, but that the claims were outright falsehoods perpetuated by an ex-girlfriend and former friend. 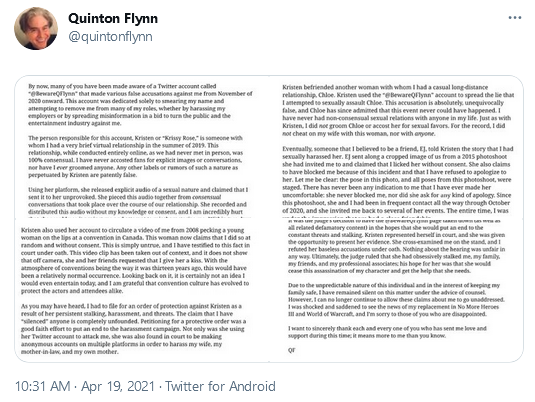 “The person responsible for this account, Kristen or “Krissy Rose,” is someone with whom I had a very brief virtual relationship in the summer of 2019,” explained Flynn. “This relationship, while conducted entirely online, as we had never met in person, was 100% consensual. I have never accosted fans for explicit images or conversations, nor have I ever groomed anyone. Any other labels or rumors of such a nature as perpetuated by Kristen are patently false.

The voice actor further noted that the sexually explicit audio clips put forth by @BewareQFlynn as evidence of Flynn’s harassing behavior were actually pieced together “from consensual conversations that took place over the course of our relationship.” 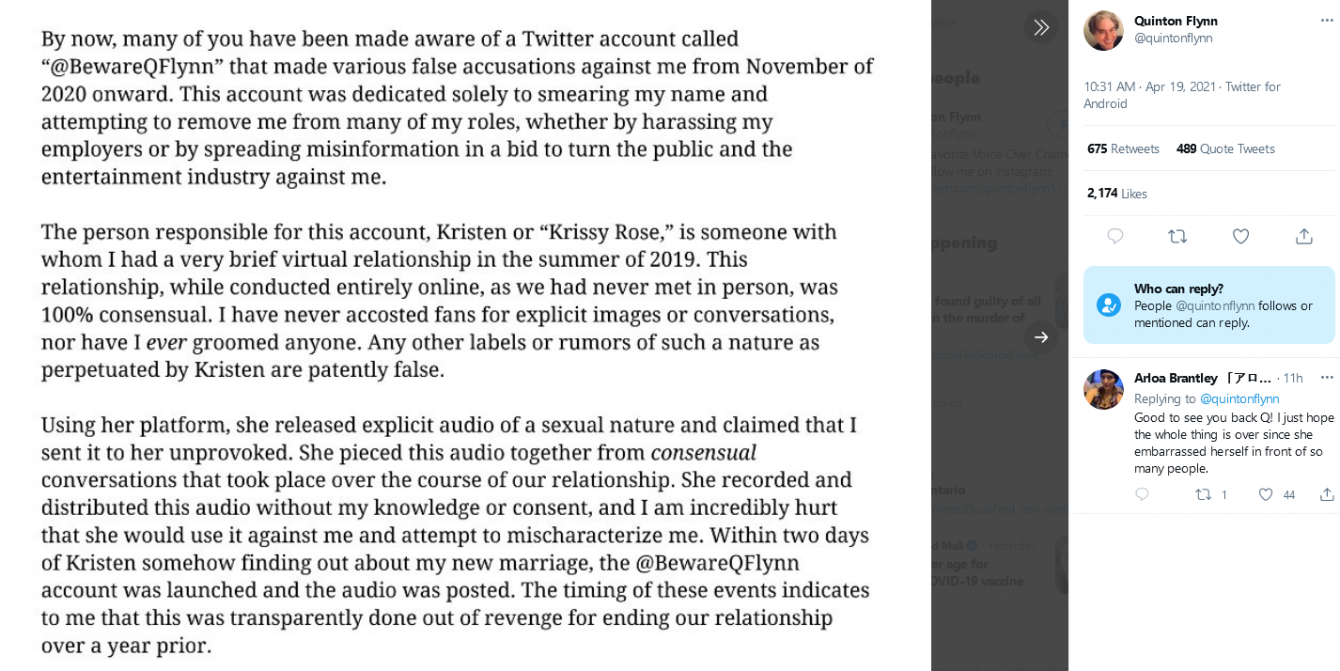 “She recorded and distributed this audio without my knowledge or consent, and I am incredibly hurt that she would use it against me and attempt to mischaracterize me,” Flynn added. “Within two days of Kristen somehow finding out about my new marriage, the @BewareQFlynn account was launched and the audio was posted.”

According to Flynn, “the timing of these events indicates to me that this was transparently done out of revenge for ending our relationship over a year prior.” 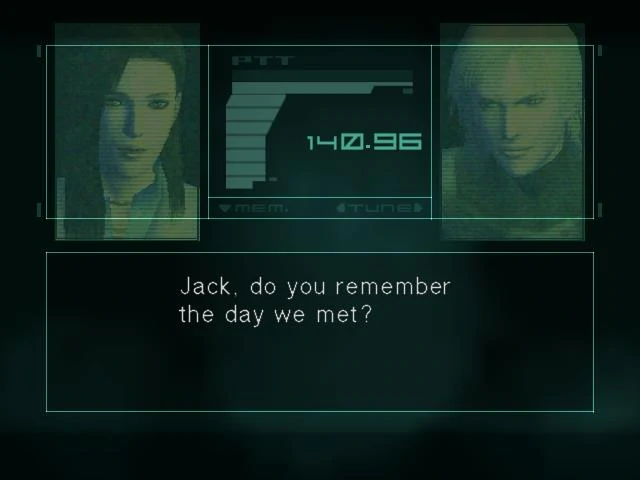 Flynn then turned to the accusations made against him by other women, as publicized by @BewareQFlynn. Regarding the aforementioned Chloe, whom he admits was “another woman with whom I had a casual long-distance relationship”, Flynn revealed that “Kristen used the ‘@BewareQFlynn’ account to spread the lie that I attempted to sexually assault Chloe,” an event which Chloe herself had since admitted “never could have happened.”

As for the the ‘thigh-licking’ incident, Flynn stated that “someone that I believed to be a friend, EJ, told Kristen the story that I had sexually harassed her [and] sent along a cropped image of us from a 2015 photoshoot she had invited me to and claimed that I licked her without consent.”

“Let me be clear: the post in this photo, and all poses from this photoshoot, were staged,” Flynn adamantly declared. “There has never been any indication to me that I ever made her uncomfortable: she never blocked me, nor did she ask for any kind of apology.”

He continued, “Since this photoshoot, she and I had been in frequent contact all the way through October of 2020, and she invited me back to several of her events. The entire time, I was under the impression that we had a close friendship.” 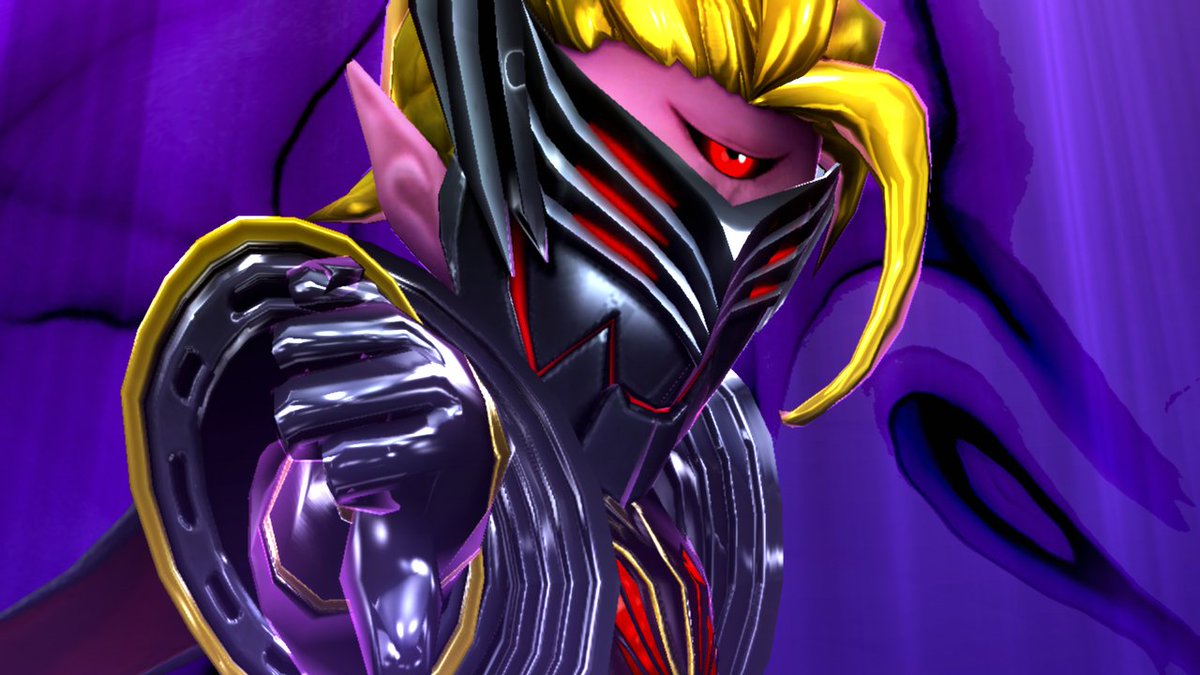 Speaking to one last accusation involving “a video of me from 2008 pecking a young woman on the lips at a convention in Canada”, which @BewareQFlynn had begun circulating alongside a claim from the woman in the video that the voice actor had kissed her “at random and without consent,” Flynn also revealed that “this video clip has been taken out of context, and it does not show that off camera, she and her friends requested that I give her a kiss”.

“With the atmosphere of conventions being the way it was thirteen years ago, this would have been a relatively normal occurrence,” said Flynn. “Looking back on it, it is certainly not an idea that I would even entertain today, and I am grateful that convention culture has evolved to protect the actors and attendees alike.”

In confirmation of his taking the false accusations to court, Flynn announced that he “had to file for an order of protection against Kristen as a result of her persistent stalking, harassment, and threats,” noting that he did not ‘silence’ anyone and that his “petitioning for a protective order was a good faith effort to put an end to the harassment campaign.”

“Not only was she using her Twitter account to attack me,” said Flynn, “she was also found in court to be making anonymous accounts on multiple platforms in order to harass my wife, my mother-in-law, and my own mother.” 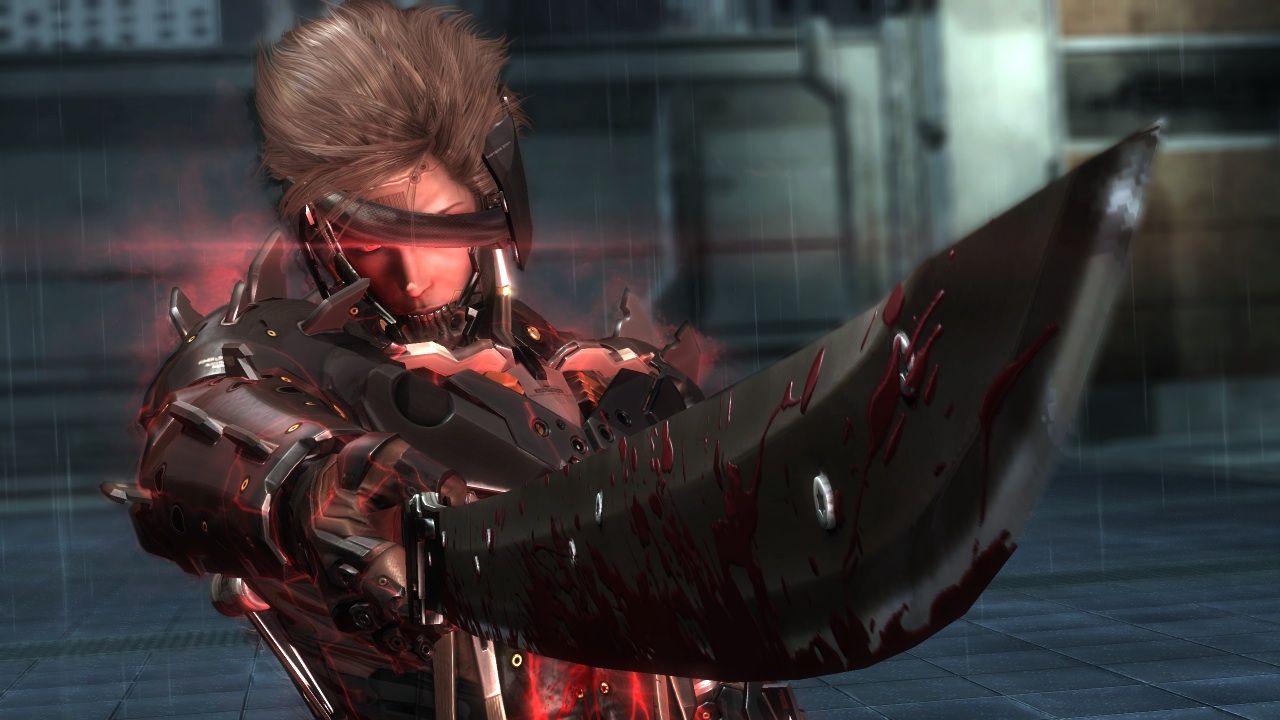 He then explained that “It was the judge’s decision to have the @BewareQFlynn page taken down (as well as all related defamatory content) in the hopes that she would put an end to the constant threats and stalking.”

“Kristen represented herself in court, and she was given the opportunity to present her evidence,” Flynn added. “She cross-examined me on the stand, and I refuted her baseless accusations under oath. Nothing about the hearing was unfair in any way.”

Flynn concluded “ultimately, the judge ruled that she had obsessively stalked me, my family, my friends, and my professional associates; his hope for her was that she would cease this assassination of my character and get the help that she needs.” 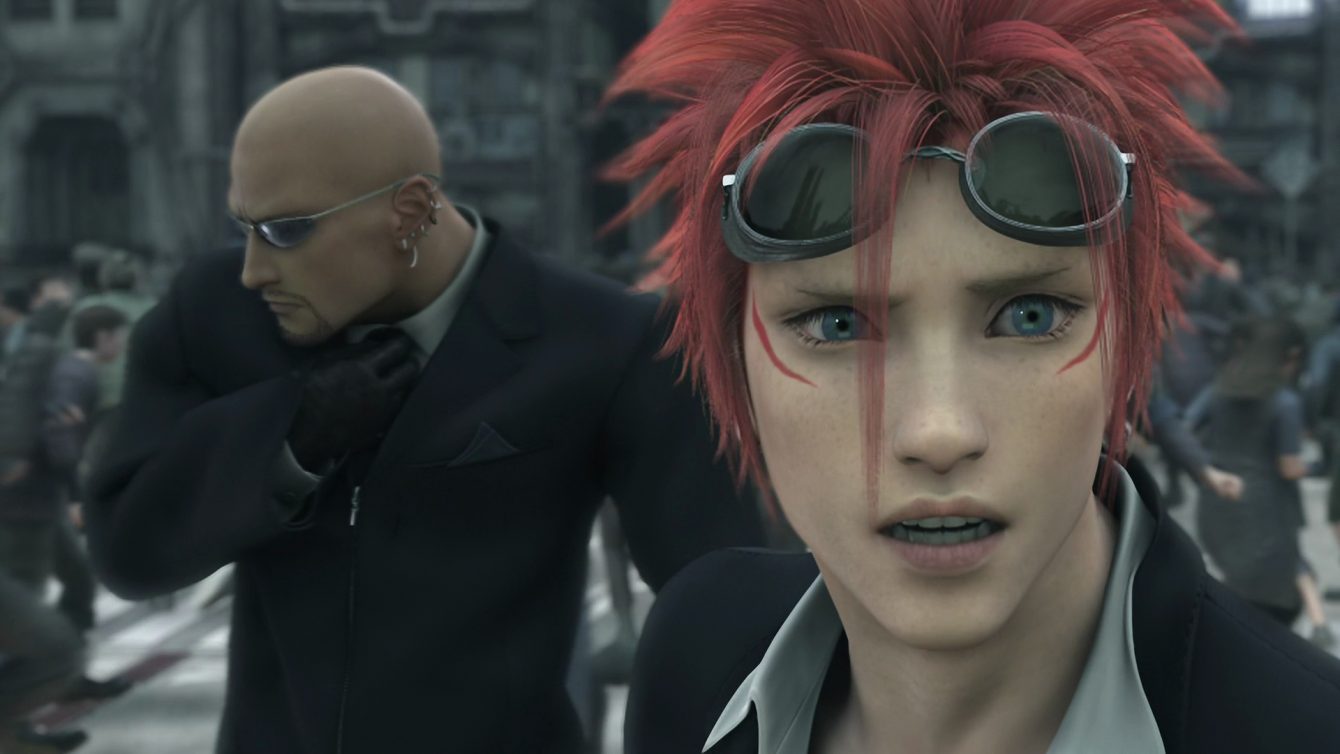 Sadly, none of these developments have changed the fact that Flynn had been removed from World of Warcraft and No More Heroes III.

“I was shocked and saddened to see the news of my replacement in No More Heroes III and World of Warcraft, and I’m sorry to those of you who are disappointed.” said Flynn on his recasting. 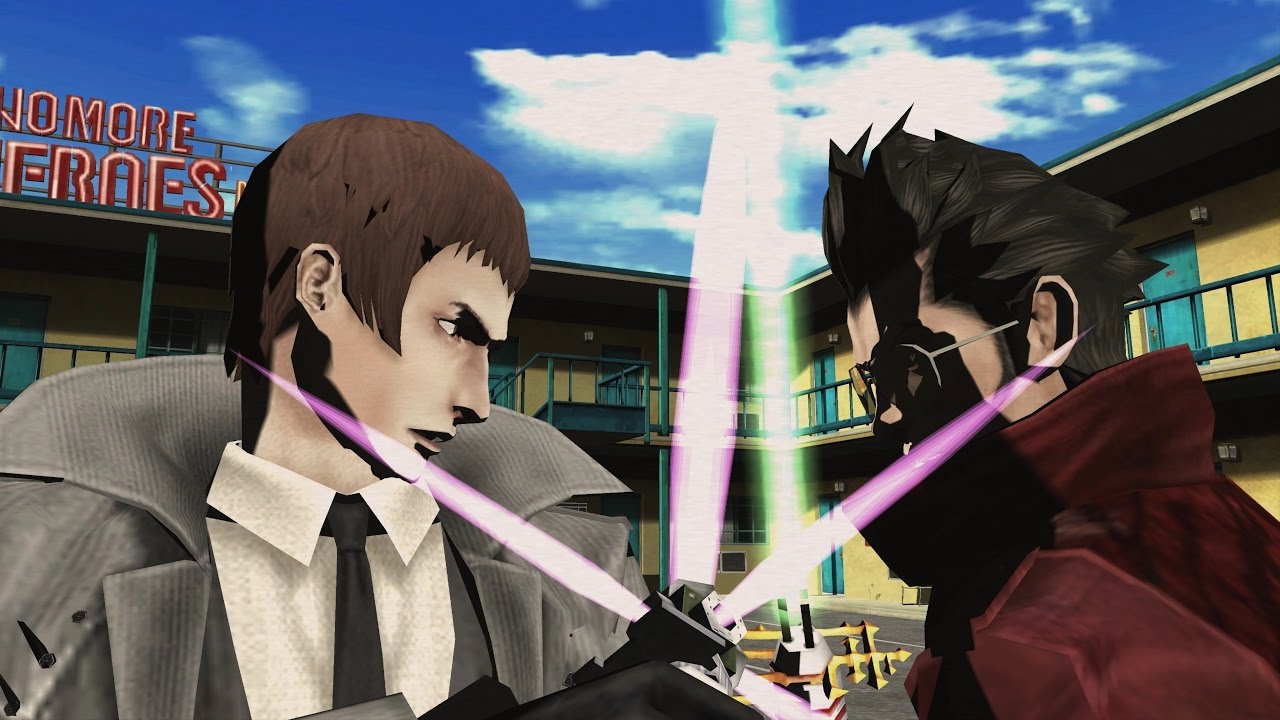 What do you make of Flynn’s response to his accusations? What about his replacement in WOW and NMH3? Let us know your thoughts on social media or in the comments down below!