Audience and user ratings have been revealed for WarnerMedia’s most recent Mortal Kombat film.

On IMDB, the film has a weighted average of 6.9 out of 10. The arithmetic mean for all users is 7.5 stars with the median coming in at 8 stars.

As you can see in the chart below the movie received 2,873 10 star ratings, which currently makes up 32% of all users rating the film. 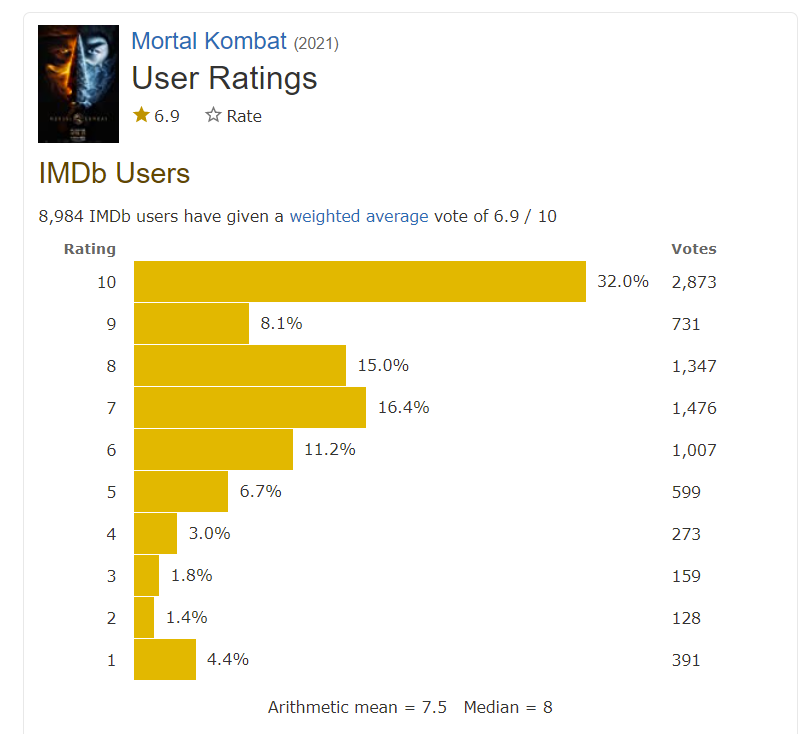 The movie is receiving higher praise from younger viewers. Not only that, but females are rating the film slightly higher than males. 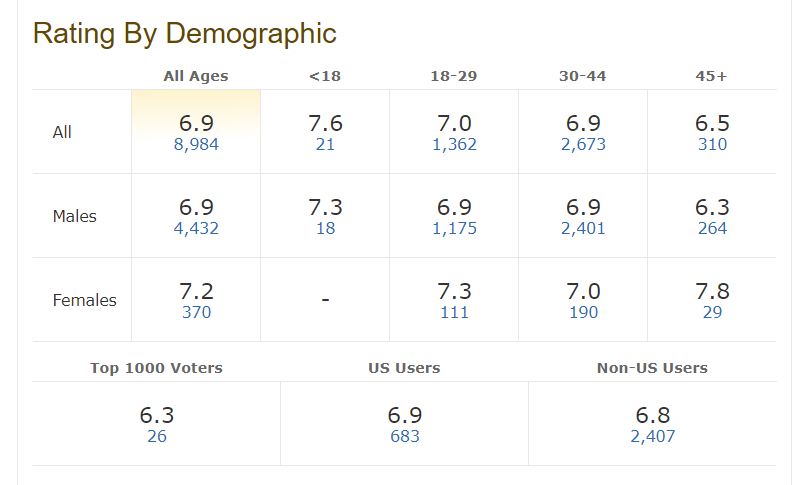 Over on Metacritic, the film has a User Score of 6.0 from 64 ratings.

Quezary gives the movie an 8. The reviewer writes, “The makers of this film clearly knew what their film is and what it is not. Surely, they were not aiming to make a storytelling masterpiece. But they were clearly making a film for the fans of the game. Most of the cast fit their roles, the visuals are solid, the fights are brutal, the jokes and callbacks are on point. Had a lot of fun watching it. A solid starting point for the new Mortal Kombat movie franchise.”

Fastdak25 gives the movie an 8 as well. The reviewer writes, “What, the story was bad? It’s MK. It’s about eh fight scenes and they are BRUTAL. Gore level on par with MK X brought to life. Loved all the moves and fatalities being recreations from the original games. Scorpion was by far the best with his scenes. Loved the few throwbacks to the first film, though won’t say them to avoid spoilers. Even liked the new version of the original film’s theme they came up with. If another is made as of course they teased, looking forward to it.”

HarrisonBrondle gives the movie a 10. They write, “Satisfyingly violent and gory. Director Simon McQuoid’s love for video games allows him to translate the franchise spectacularly onto the big screen.”

Traceyrose gives the movie a 10. The user wrote, “This movie was an amazing adaptation of the video game. They did a great job sticking to the source material while still keeping it fresh for longtime fans like myself. For those mad about character deaths please remember that death isn’t forever in the MK universe. I loved this movie and hope there will be more to come!”

Native232 gave the movie a 0. They wrote, “Bad storyline!! Nothing like the original Mortal Kombat ! Such bad acting and cheesy music. So disappointed!”

Ultrafergie gave the movie a 1. They wrote, “hank god this movie released at midnight because it was perfect to help me fall asleep. Whoever was in charge of writing this script needs to be never allowed to make another film.. What in the actual F$%^ happened.”

Diabolama gives the movie a 3. The reviewer, “It’s not even easy to enjoy fight scenes in this movie, cause of the frantic way they are shot and edited. Story is nonsensical, added storylines like the “mark” looks like an attempt to turn Mk into superhero movie. Sonya’s “arc” is particularly ridiculous. Kano should’ve stayed in the dumpster he sleeps in…”

Gabagu gives the movie. They write, “It has some big pacing issues in the second act, it doesn’t breathe properly, making things feel rushed and inorganic, especially with the soundtrack never retreating for a moment’s rest even if it is for one simple dialogue scene, like the one in the dinner table. It’s something that could be easily fixed by sending the movie back to the editing room.”

DanielKakish gives the movie a 3. He writes, “I’ve been waiting for this for over 20 years. Both 90s movies were better than this one. So was the Legacy series, hell, even Conquest & Defenders of the Realm were better than this. Acting was horrible, plot was horrible, low budget, cheaply made movie. The only good thing about this movie was Joe Taslim, if they make a sequel, which would be shocking since this first one was so bad, Taslim needs to come back as Noob Saibot. Kano was okay but he died, and Johnny Cage was teased for the sequel. I can’t get over how bad this movie was overall. It’s very hurtful. Thank you Warner Brothers!”

Rotten Tomatoes has not released an official Audience Score yet despite there being over 250 audience reviews.

Here’s what some folks are saying there:

SpoOder b gave the movie 4 stars. He writes, “The best video game movie ever made by far. Fans of the series will love it. Newcomers will love it. Great action, great characters (Kabal, Kano, and Sub-Zero being especially great.) Watch it.”

Ben L gives the movie 1.5 stars. He writes, “While ambitious the film is just a setup for a sequel. Which we probably are not even getting now.”

Rochelle F gives the movie 2.5 stars. She writes, “The movie tries to find a sense of humour in its dialogue, however the movie’s plot takes itself way too seriously. Not to mention the ‘mortal kombat’ tournament ended up just looking like two mini rival gangs from opposing worlds fighting in the one arena- and with the lack of changing scenery jt made the movie get real boring, real quick.”

Jeffrey P gives the movie 5 stars. He writes, “Honestly, a good movie to have fun with and enjoy. If you’re looking for some life changing, hipster indie movie with symbolism behind every angle of the camera shot, this ain’t it and shouldn’t have those standards for a movie based on a fighting game.”

Julie Y gives the movie 5 stars. She writes, “I was worried at first but no woke bull crap at all. Great action, fun and an exciting ride. Now i hope we get to see a sequal to get the characters we didnt get this movie. I was going to give it 4 stars but just because rhey gave me an entertaining movie and didnt preach i gave it 5”

Jeffrey W gives the movie 5 stars. He writes, “This is what happens when fans make a movie for fans you get f***ing mortal kombat this movie is not for critics 10/10.” 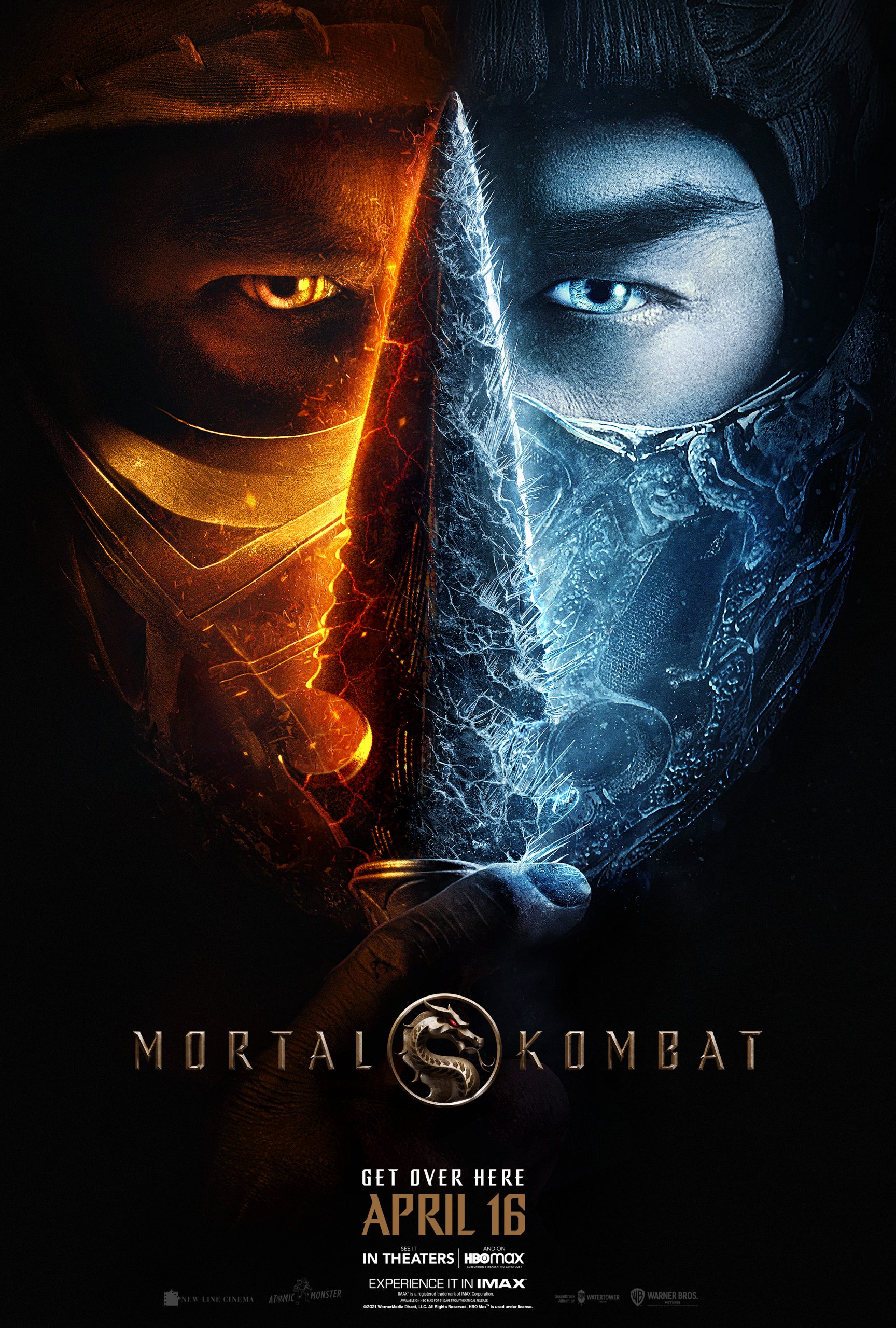 Velislav D gave the film 1 star. He wrote, “The CGI was laughably bad at times, the story was beyond cheesy and the whole package is underwhelming at best.”

Martin C gave the film 3.5 stars. He wrote, “I am a fan of the games and of the first movie as well.. for me is a correct movie…was the thing I was expecting.. no more no less..”

Guilherme R gives the movie 3 stars. He writes, “It may be a worthy successor from the previous ones, but a terrible successor for those who are fans of the MK story and are looking for a rich story… it is not. Underdeveloped characters both main and secundary, i didn’t care for Cole neither for his family. With a very weak script and many cliché scenes Mortal Kombat still makes you stay put for it’s incredible fight scenes and CGI, with a up to par soundtrack. Sub-Zero and the awaiting for Scorpion are also the reason’s this movie is actually watched in it’s entirety. I am hoping the next movies, if they are to be made, be more rich and developed than this one.”

Have you seen Mortal Kombat? What did you think of it?