Sarah Paulson, known for her roles in the critically praised American Horror Story, has recently faced some backlash by the cancel culture mob. The reason? She’s allegedly worn a fat suit for an upcoming episode of American Crime Story.

The cancel culture mob decided to target the actor after she was seen wearing what seemingly looks like a fat suit in a couple of behind the scenes photos for American Crime Story, reports Yahoo!Life. 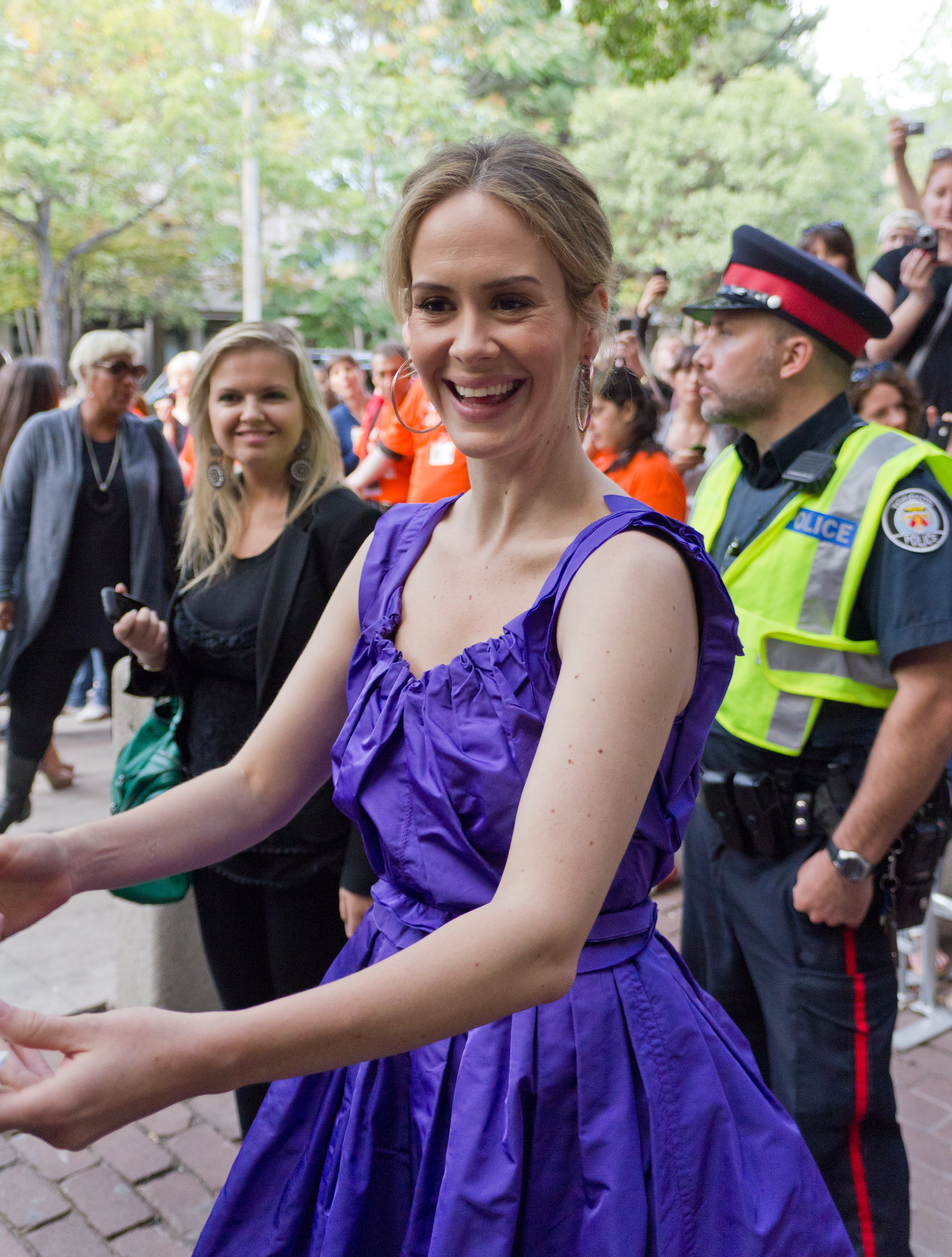 For this new season of American Crime Story, subtitled Impeachment, Sarah Paulson will be stepping into the role of former White House employee Linda Tripp during the impeachment trial of former President of the United States Bill Clinton.

The photos of Paulson as Linda Tripp were first shared by Film Update’s Twitter account, opening the door for the cancel culture mob to express their dissatisfaction with the casting decision — who believe casting a fat person instead would’ve been ideal. 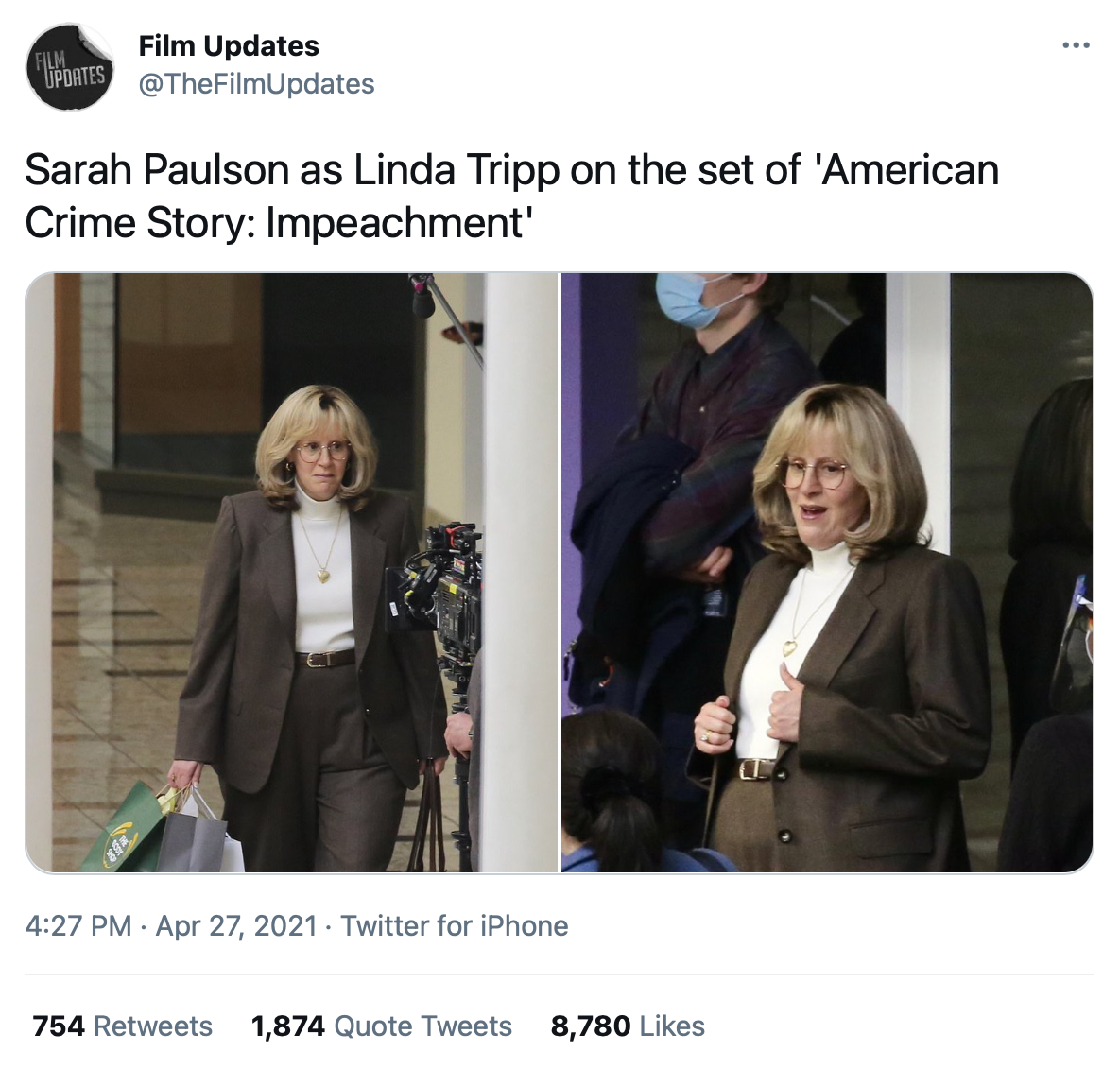 “So, let me get this straight: Fat people don’t get acting jobs because they don’t physically fit the part,” a disgruntled Twitter user comments, adding, “but skinny people who don’t fit the part are given accommodations?”

Twitter user @bluestockinsara states that “I like Sarah Paulson but far suits are  dehumanizing,”  while also adding, “Hire fat actors.”

“Maybe they should hire actresses who fit the physicality of the person they’re playing,” states yet another frustrated Twitter user. She continues, “instead of hiring all skinny actors and putting them in fatphobic fatsuits/padding?” “It’s disgusting,” the Twitter user concludes.

“Could have saved time and money hiring an actual fat actress. Ryan f***ing knows some, even! But no,” the user eloquently expressed.

Fox News talk show host and political commentator Megyn Kelly also took to Twitter to express her opinion on Sarah Paulson facing backlash — calling out both the cancel culture mob and Paulson herself for going after J.K. Rowling in the past.

“She’s since been attacked 2x by the mob—for refusing to post her pronouns & now for playing a larger woman,” Kelly added. “You cannot pay insurance to The Woke & expect protection. The eat their own daily,” she concluded. 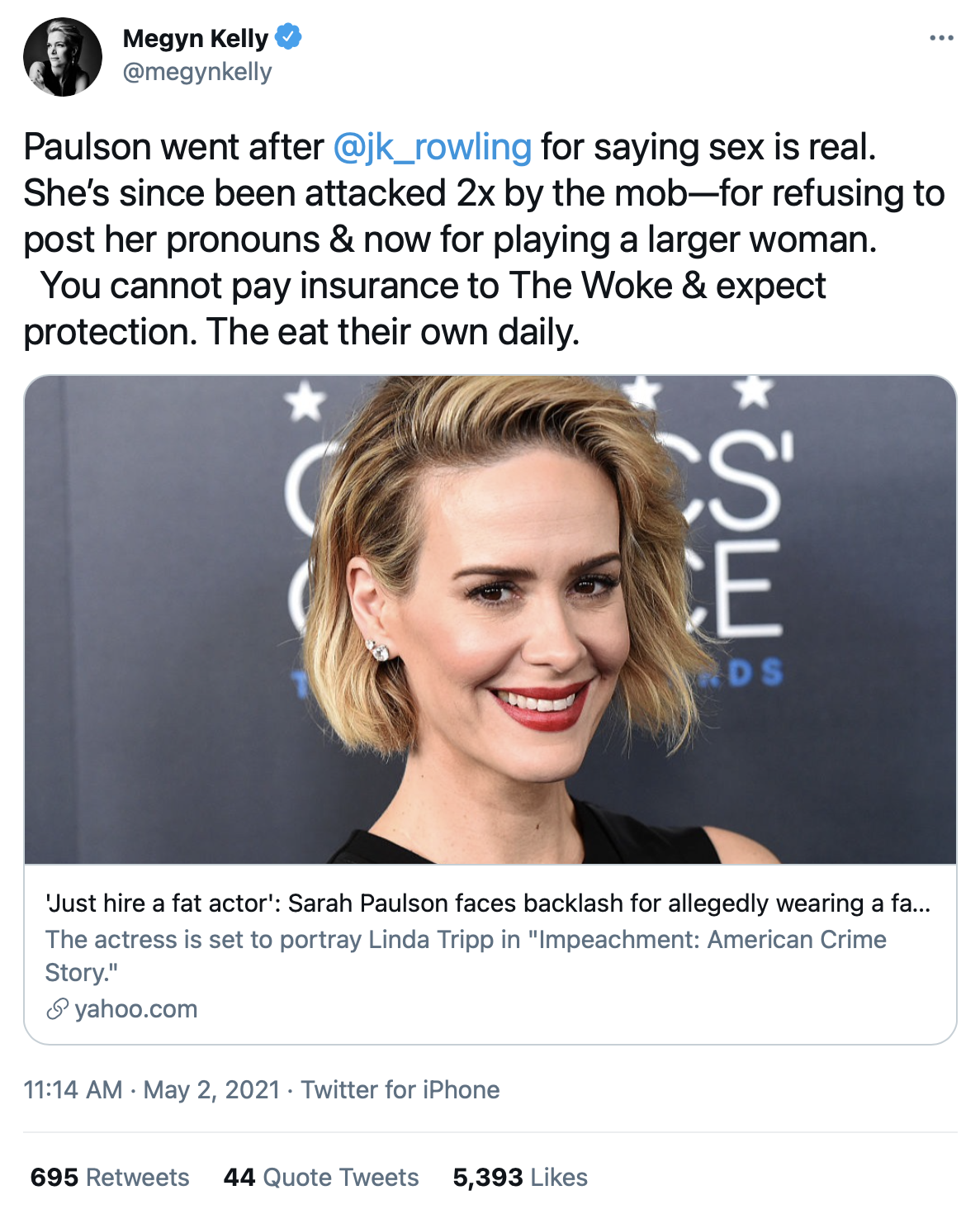 Twitter user @EZBreezyT dropped some common sense, stating that “Some of  y’all are too ‘woke’ for your own good. None of y’all were involved with the casting decisions. How do you know they didn’t audition many ppl & Sarah was the best.”

The user then adds, “I’d rather have an actress deliver in the role versus hiring someone b/c they fit the demographic.” 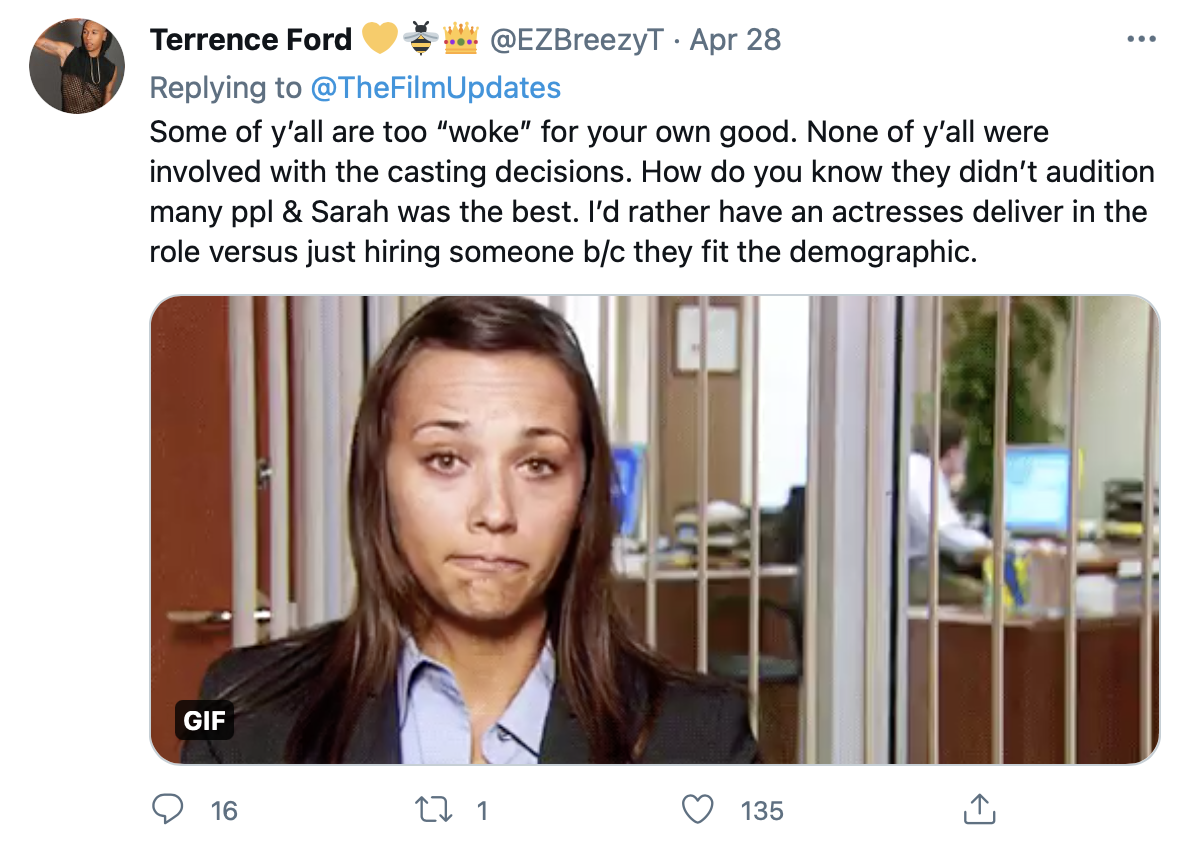 “I don’t understand people anymore,” reads a tweet by user @Nestwos, who adds, ” If she had put on 30 pounds, just to work them off again afterwards everyone would be thrilled, except for her body …”

“Sarah, particularly, really had been dedicated to that role and she wanted to do it naturally and she gained weight to play Linda Tripp,” Murphy explained during a recent interview with Entertainment Tonight.

“And then, you know, you put the wig on her and it’s sort of an amazing thing she’s doing physically,” Murphy added. 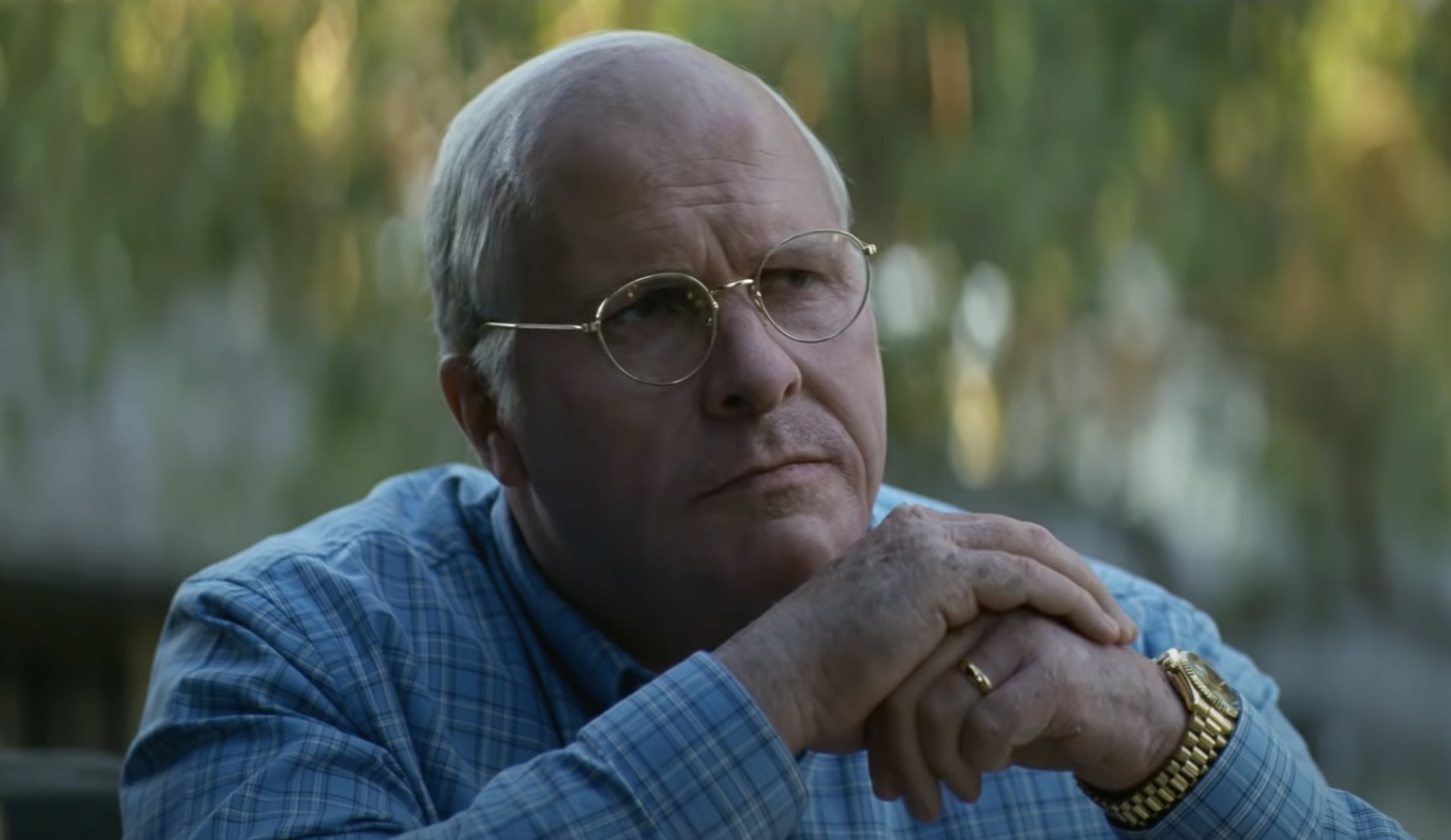 Ryan Murphy continues, “It’s very transformative. It reminds me a lot of what Christian Bale did a couple years ago — that sort of dedication. We talked a lot about how she has to keep it up for many many months until it’s done shooting, so it’s hard.”

Murphy’s comments on Sarah Paulson’s transformation for her role as Linda Tripp for the new season of American Crime Story seemingly confirms that the actor isn’t wearing a fat suit, which would also mean that the cancel culture mob are actually body shaming Paulson instead.

What do you make of Sarah Paulson facing backlash for allegedly wearing a fat suit for the new season of American Crime Story? Let us know in the comments section down below or on social media.