According to the documents, which independent journalist Christopher F. Rufo claims to have obtained from a company whistleblower, Disney’s new ‘Reimagine Tomorrow’ program consists of a number of different modules aimed at teaching employees how to both be ‘anti-racist.’ 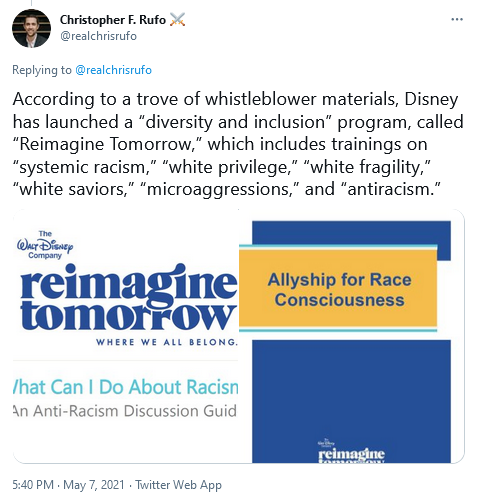 One such module titled Allyship for Race Consciousness asks employees to “take ownership of educating yourself about structural anti-Black racism in the current and historical context,” while also avoiding having to “rely on your Black colleagues to educate you,” as the task would be too “emotionally taxing.” 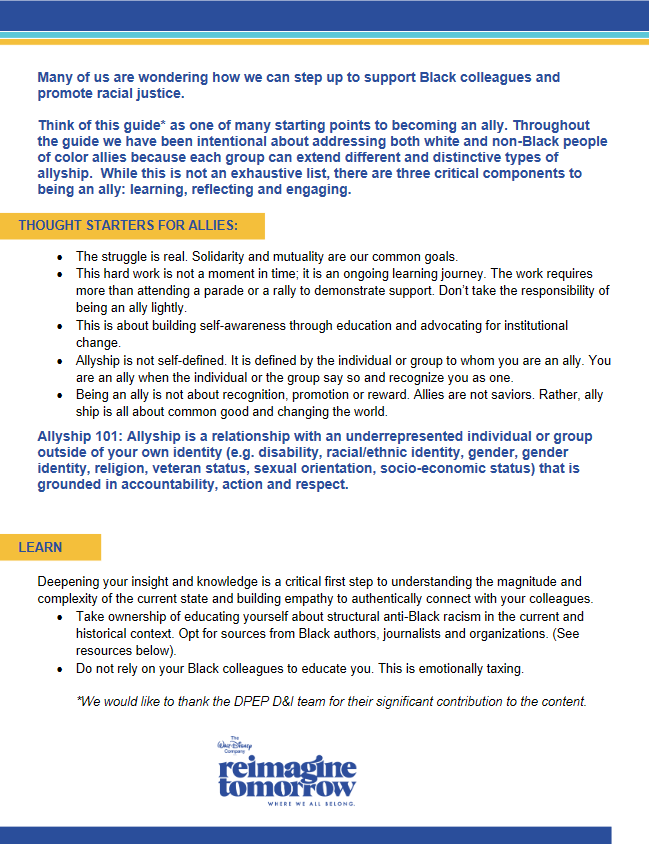 Disney also claims that not only does the United States have “a long history of systemic racism and transphobia,” but that most non-Black employees, particularly white employees, “work through feelings of guilt, shame, and defensiveness to understand what is beneath them and what needs to be healed.”

Asserting that potential allies must embrace “discomfort and humility,” Disney further urges employees to “challenge colorblind ideologies and rhetoric” such as “All Lives Matter” or “I don’t see color” and to “not question or debate Black colleagues’ lived experience.”

Ironically, Disney also asks institutions to both “be aware of tokenism, when Black professionals are expected to be representative for their entire race” and “mention professional skills and qualities of Black colleagues when they are not around to provide visibility and sponsorship,” not realizing that the latter request is literally tokenization. 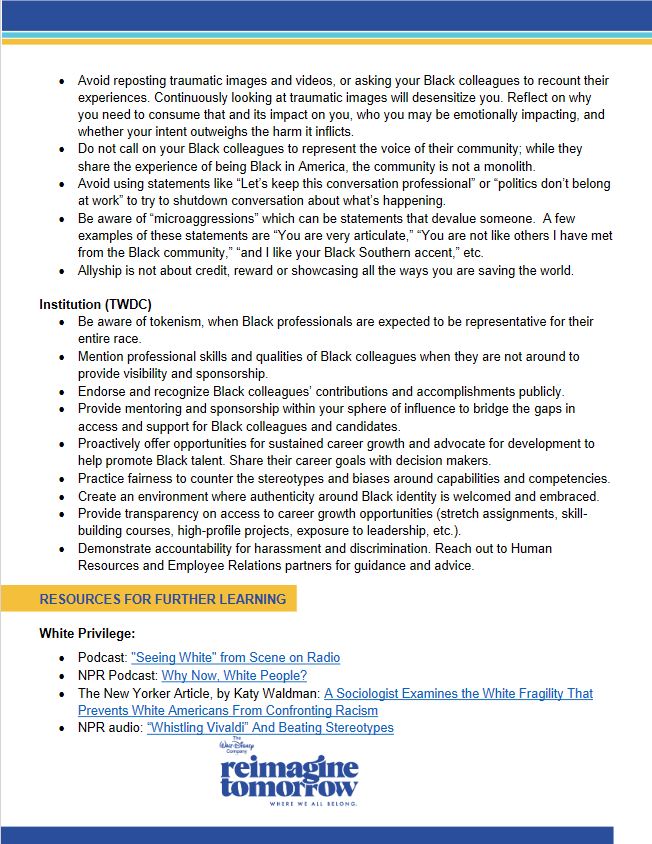 Another module, What Can I Do About Racism?, asks employees to reject equality, or the goal of “equal treatment and access to opportunities,” in favor of equity, or “the equality of the outcome.” 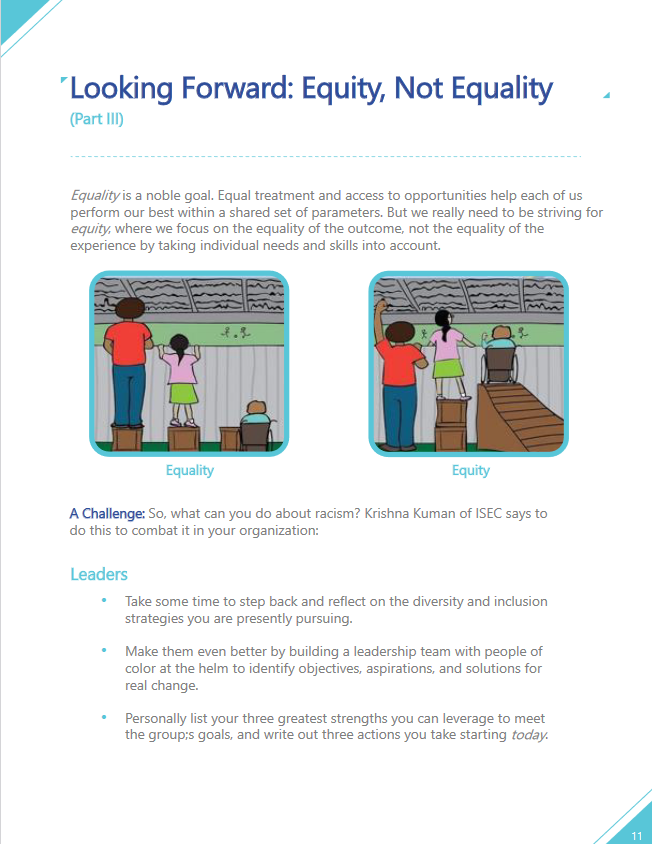 In one ‘Pro Inclusion Tip’ featured in the module, Disney recommends that employees “talk openly” about everyone’s race and ethnicities in order “to appeal to people’s conscious values and challenge their unconscious biases.”

“But be aware that if you’re going to talk about race, identify everyone’s race,” continues the tip. “By identifying someone as Black or Latinx, but not categorizing someone else as White, you’re saying that White is the norm by which all other races are measured.” 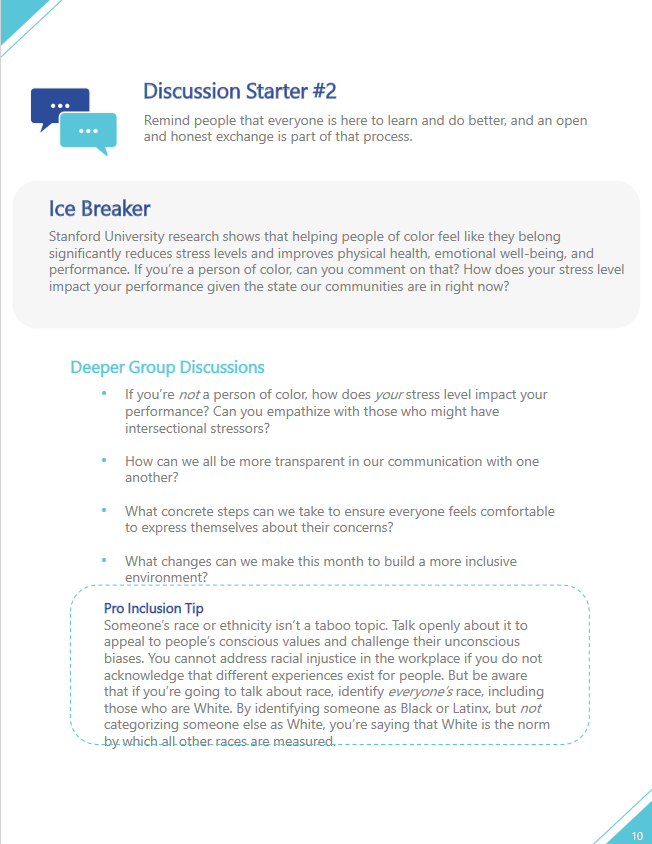 The module concludes with a number of recommended resources for further reading, including Ibram X. Kendi’s ‘How To Be An Anti-Racist’ and Robin DiAngelo’s ‘White Fragility.’

As noted by Rufo, Disney put these ideas into practice by sponsoring the creation of a “21-Day Racial Equity and Social Justice Challenge,” which begins with a lesson on “systemic racism” that “tells participants they have ‘all been raised in a society that elevates white culture over others.’”

After next completing a “white privilege checklist”, participants are then instructed to complete an exercise called “How To Tell If You Have White Fragility,” which teaches that the belief in statements such as “I am a good person, I can’t be racist” and “I was taught to treat everyone the same” is evidence of internalized racism and white fragility. 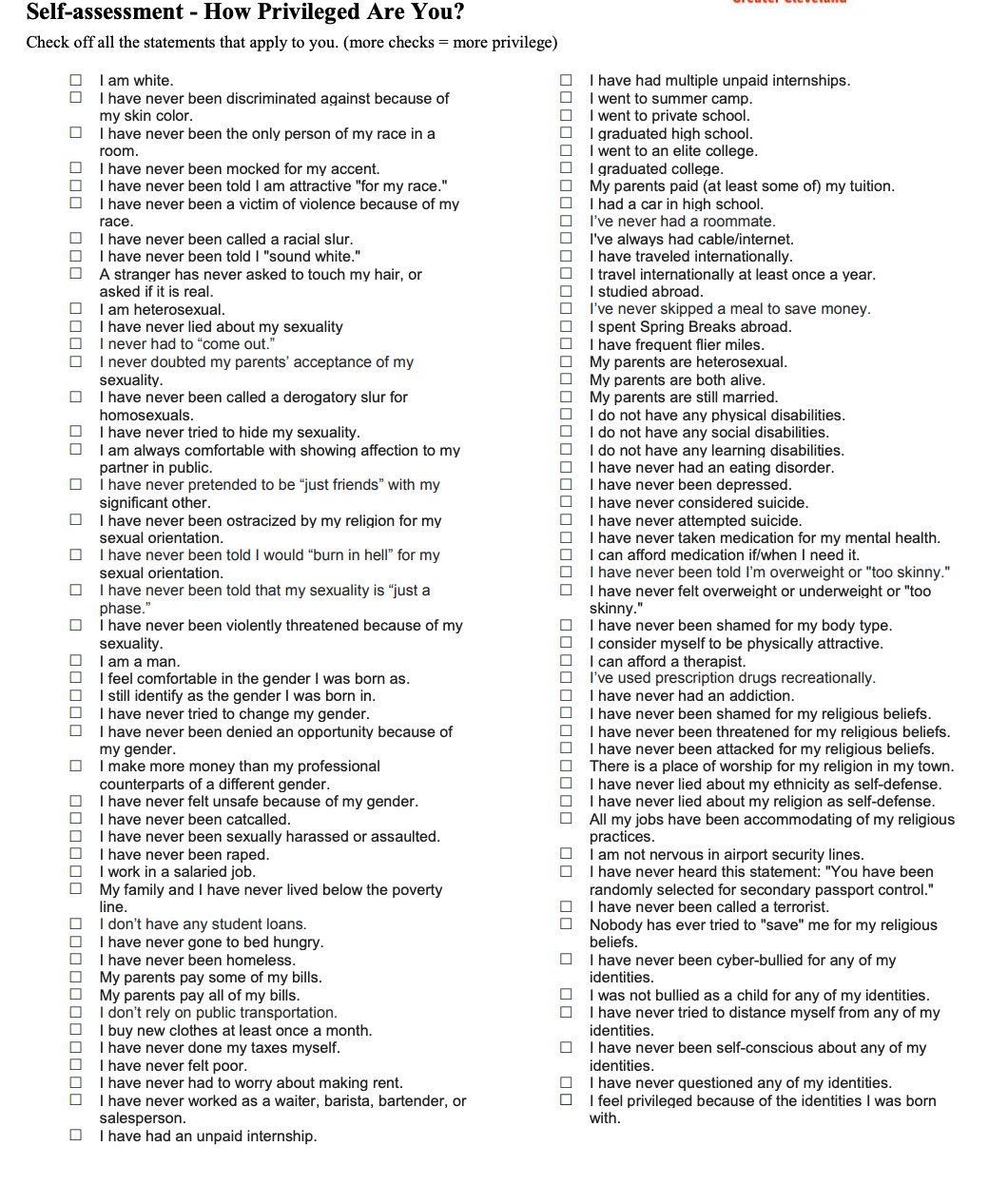 Finally, participants are given a worksheet encouraging them to “pivot” from “white dominant culture” to “something different.” 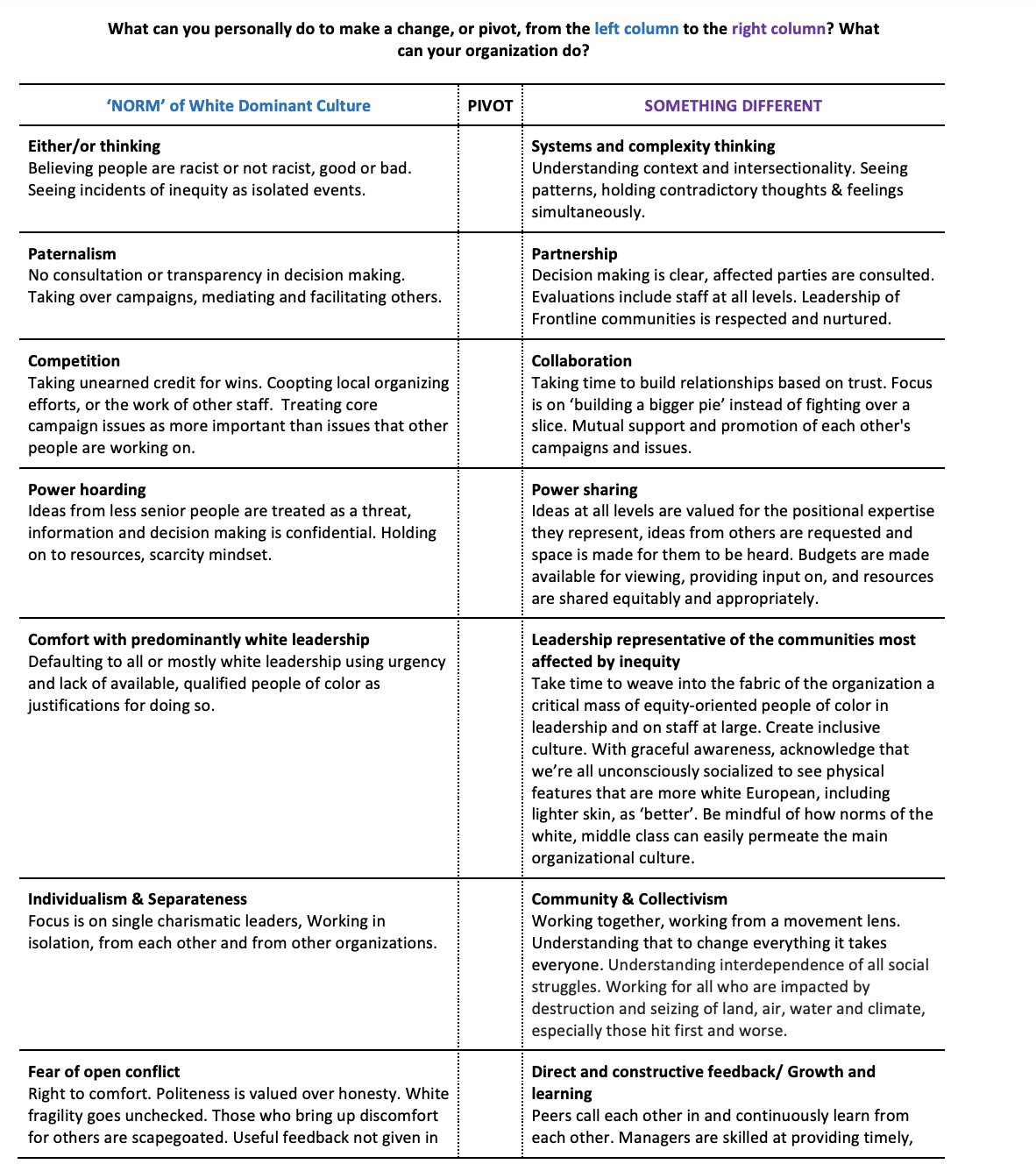 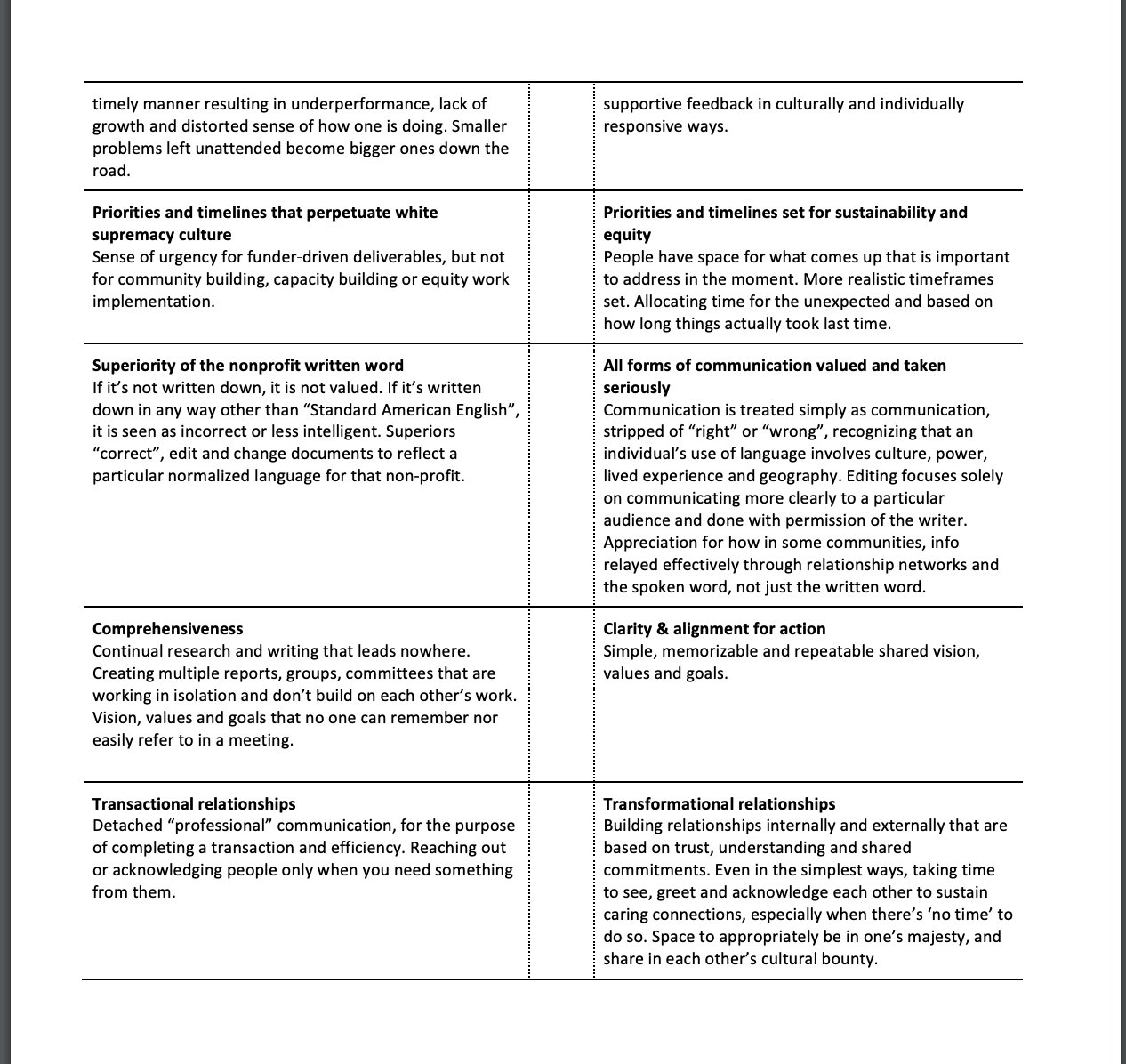 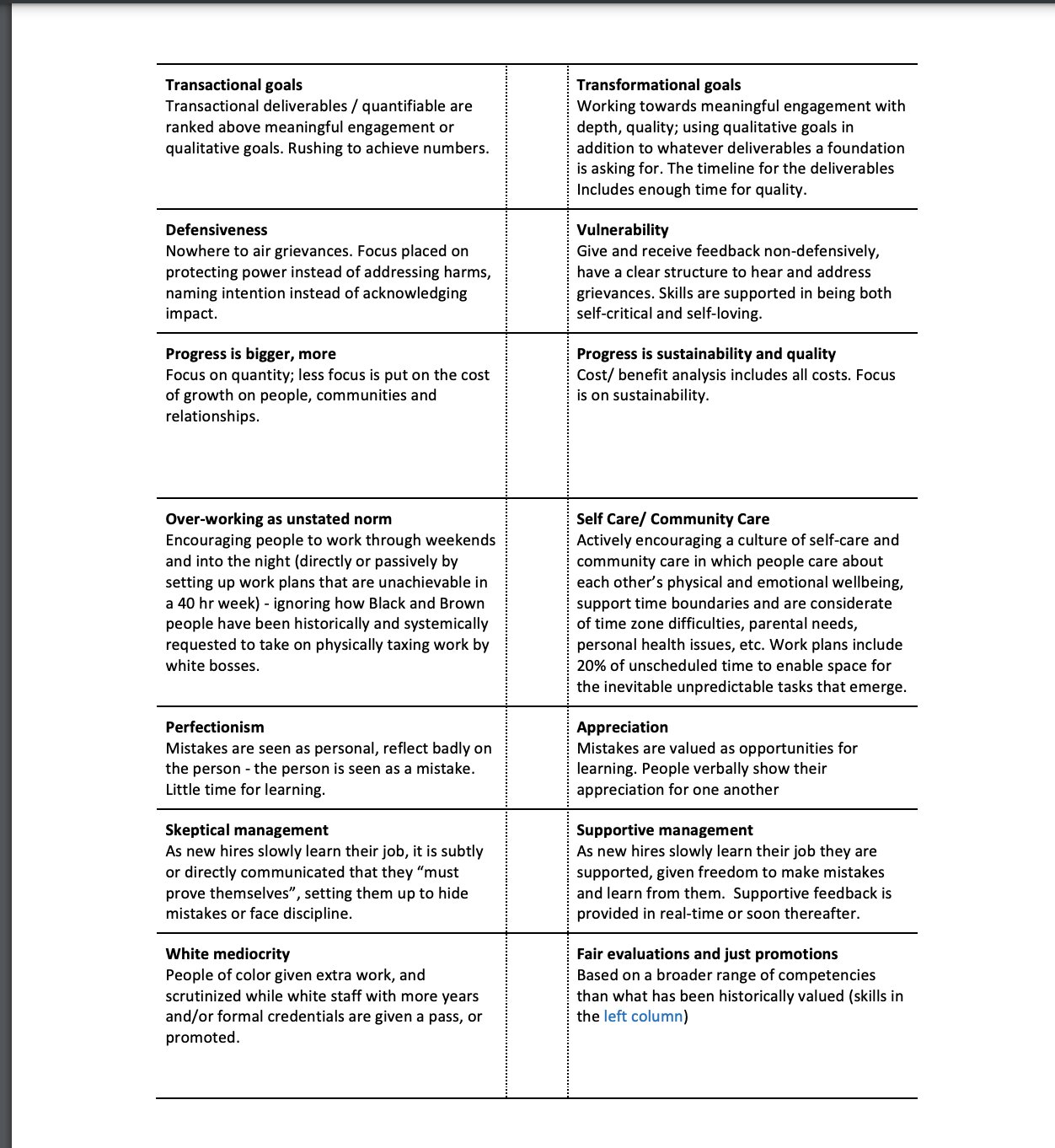 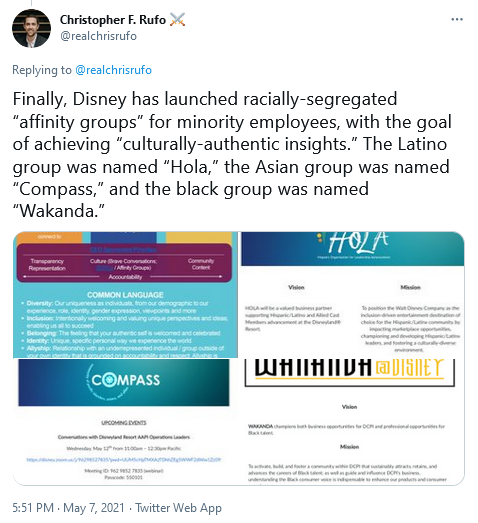 Hilariously, on a slide outlining the vision and mission statements of the ‘Hola’ group, Disney could not keep their critical race theory approved terminology in order, referring to Latinos first as “Latinos” and then as “Latinxs” in the respective statements. 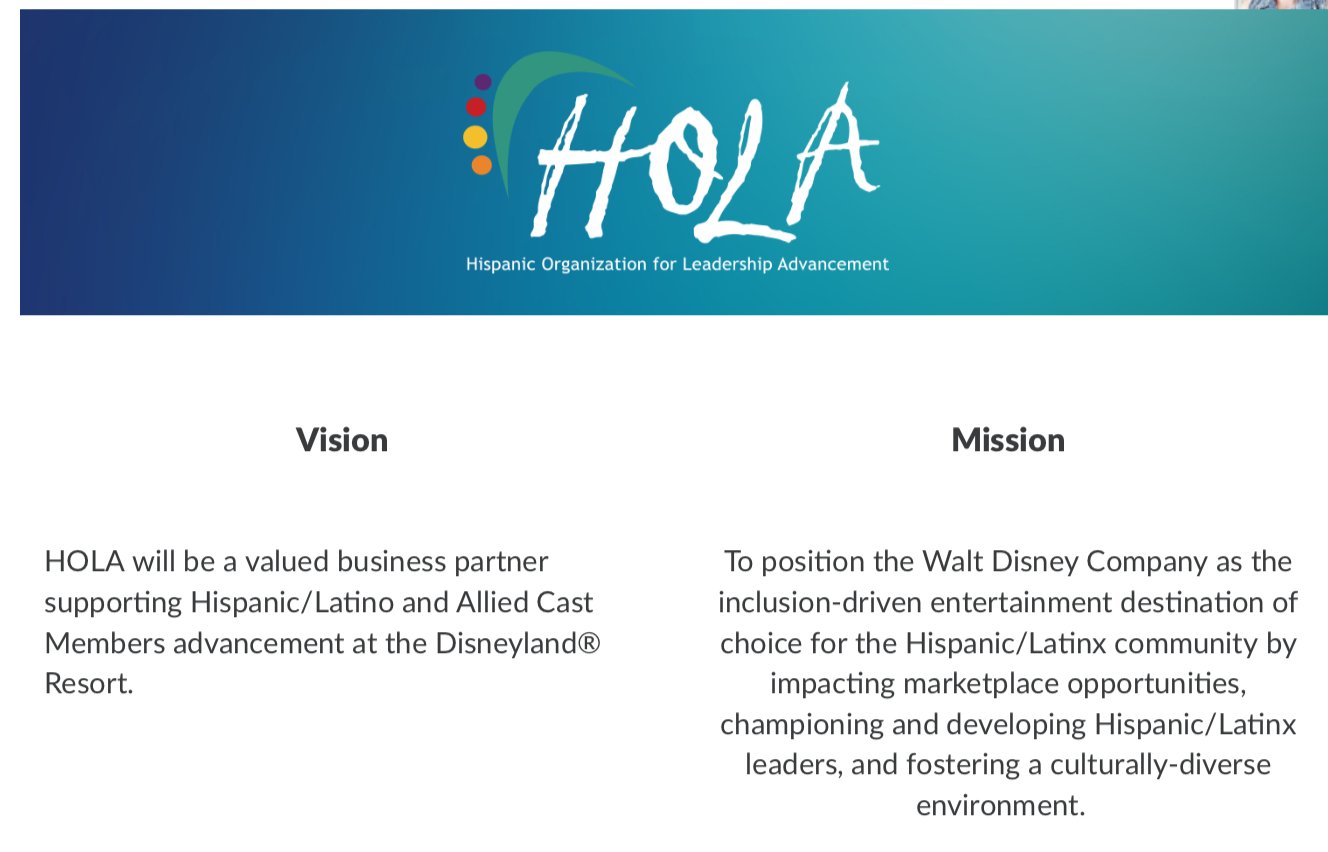 On his personal website, Rufo recalled how “multiple Disney employees told me the political environment at the company has intensified in recent months,” with one conservative employee in particular asserting that there are “almost daily memos, suggested readings, panels, and seminars that [are] all centered around antiracism.”

The anonymous employee further noted that the company is “completely ideologically one-sided,” telling Rufo, “I attended several [training sessions] at the beginning just to see what the temperature of the discussion would be and to gauge if I would be able to bring up my own objections in a safe way—safe meaning for my career. And I’ve continually gotten the unspoken answer: ‘no.'”

“It’s been very stifling to feel like everyone keeps talking about having open dialogue and compassionate conversations,” added the employee. “But when it comes down to it, I know if I said one thing that was truthful, based on data, or even just based on my own personal experience, it would actually be rather unwelcomed.” 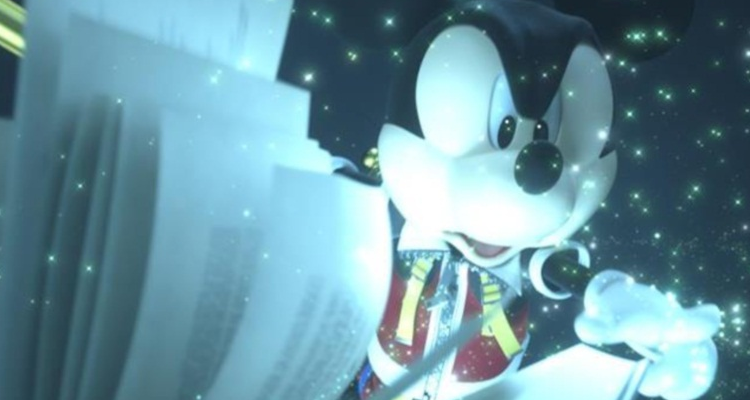 Unsurprisingly, Disney did not take kindly to their internal documents being exposed, issuing a statement four days after Rufo’s initial reporting claiming that “these internal documents are being deliberately distorted as reflective of company policy.”

Instead, claimed Disney, “their purpose was to allow diversity of thought and discussions on the incredibly complex and challenging issues of race and discrimination that we as a society and companies nationwide are facing.”

“The Disney Brand has a long history of inclusivity, with stories that reflect acceptance and tolerance and celebrate people’s differences, as we have consistently demonstrated in such popular films as Moana, Coco, Black Panther, Soul and Raya and the Last Dragon, and as a global entertainment company we are committed to continuing to tell stories that reflect the rich diversity of the human experience,” concluded the entertainment conglomerate. 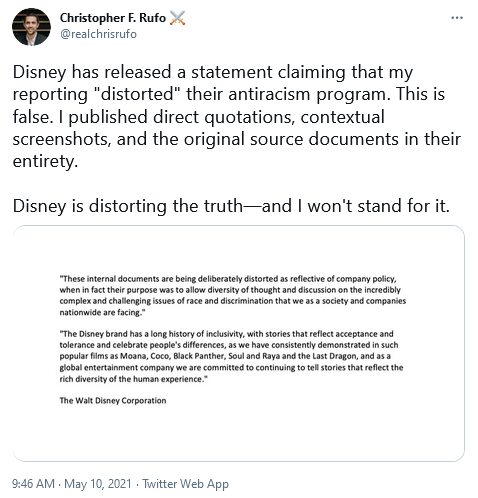 The original source documents, as provided by Rufo, can be found on his personal website.

What do you make of these leaked documents? Let us know your thoughts on social media or in the comments down below!