The future of Kamen Rider and Super Sentai outside of Japan has recently been thrown into jeopardy as a number of fan groups responsible for producing subtitled releases of the two tokusatsu series have received official cease and desist orders from Toei, with the prominent media production company demanding  that each respective group “immediately remove or disable all access to all” of their content. 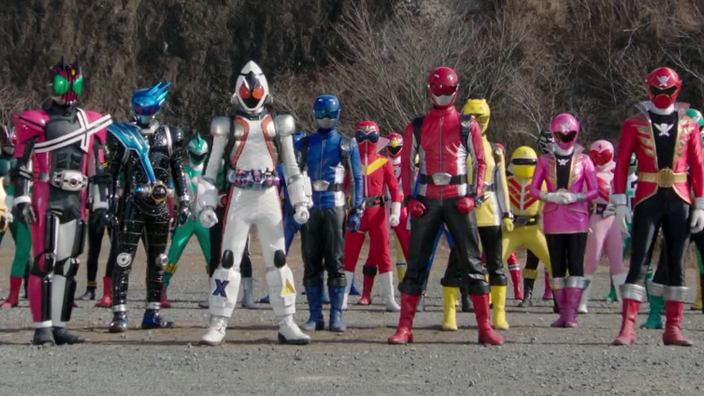 Throughout the history of Kamen Rider and Super Sentai, Toei’s attitude towards providing international support for the two franchises has been, to say the least, reluctant, as Toei has been extremely hesitant to officially license either series for wide release outside of Japan, particularly in the West.

After agreeing to let the United States produce their own adaptations of each series in the form of Power Rangers and its short lived Masked Rider spin-off, both of which share only concepts and footage with their Japanese counterparts, Toei all but abandoned the West as a market for their tokusatsu franchises. 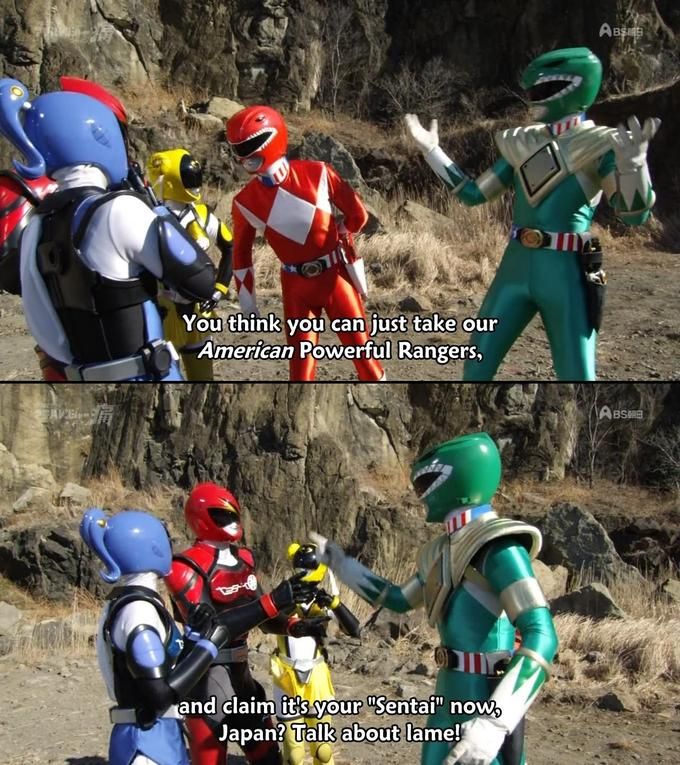 As such, no Super Sentai series saw an official release until 2014, when Shout! Factory released Kyōryū Sentai Zyuranger on DVD in the United States

Yet, while this agreement was met with open arms by Western fans, the resulting release schedule further reinforced Toei’s indifference towards the West. As of 2021, seven years into their licensing agreement with Toei, Shout! Factory has thus far only produced collections for twelve non-consecutive Super Sentai series out of the franchise’s roughly 45 total entries, the most recent one being the complete run of  2002’s Ninpu Sentai Hurricaneger. 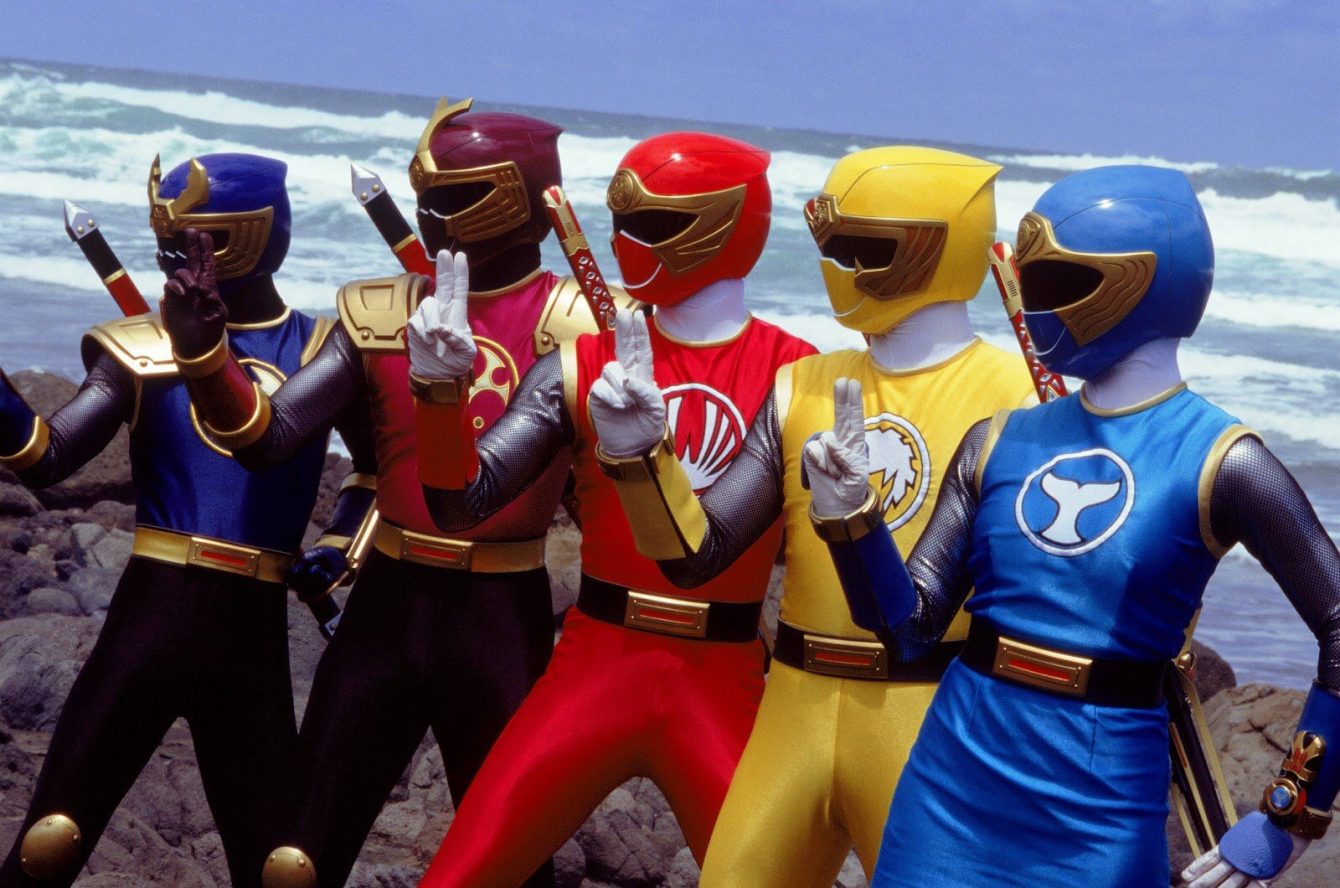 The situation is even more dire where Kamen Rider is concerned.

Aside from the aforementioned Masked Rider adaptation, only two other pieces of actual Kamen Rider media have been released in the West: Kamen Rider: Dragon Knight, an American adaptation of Kamen Rider Ryuki, and Kamen Rider Amazons, whose widespread release only occurred due to the series being released exclusively on Amazon Video. 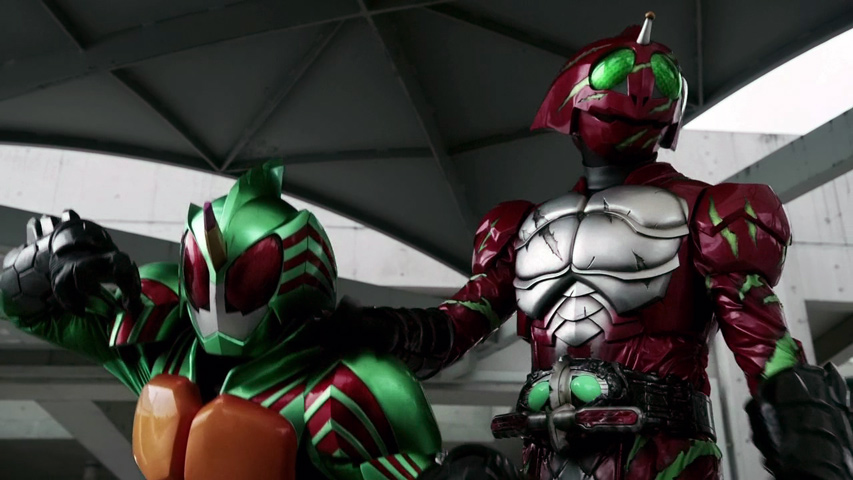 Furthermore, unlike Super Sentai, Kamen Rider has had no Western home video releases.

When taken all together, these situations surrounding Super Sentai and Kamen Rider made legal consumption of these franchises by non-Japanese speakers all but impossible. 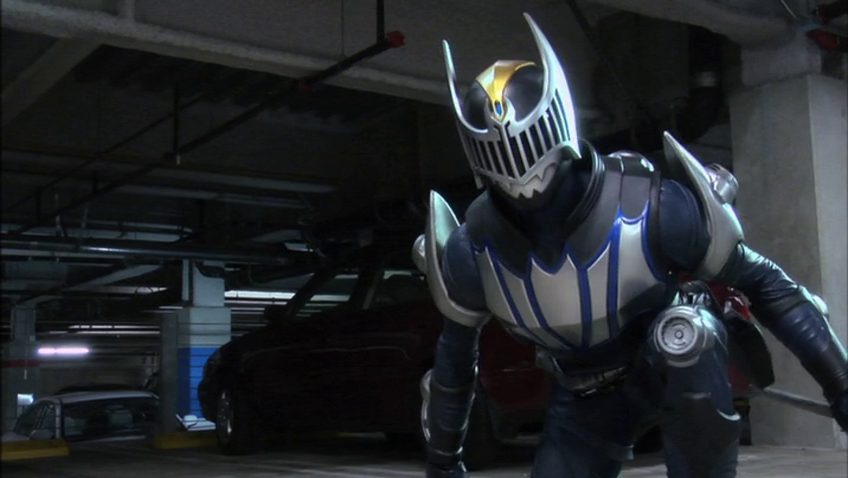 In light of this impossibility and the popularity of both series across the globe, the early 2000s saw the emergence of numerous fan subbing groups, some of which began to produce translated subtitles for each new Super Sentai and Kamen Rider series.

Over time, these groups grew in popularity and reach, with many eventually becoming de facto release sources for each of the tokusatsu series outside of Japan and subsequently opening up the franchises to an even wider fanbase 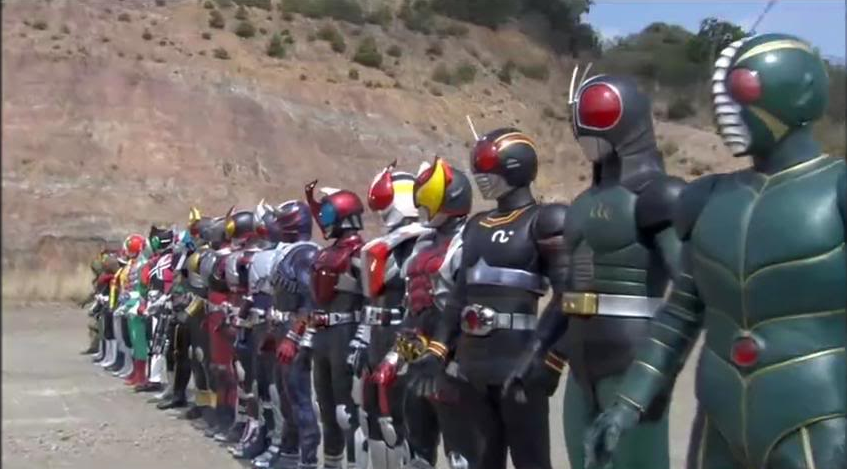 However, following the recent changes made to various aspects of Japan’s copyright laws, it seems this era of international fandom may be coming to a close.

On May 13th, TV-Nihon admin Takenoko, whose site was one of the preeminent destinations for subtitled releases of various tokusatsu series, announced that they had received an official “Notice of Copyright Infringement” from Toei regarding their work on Super Sentai and Kamen Rider.

According to the letter shared by Takenoko, Toei took issue with how TV-Nihon linked users to torrents containing “materials which infringe our copyright” (i.e. subtitled releases of Super Sentai and Kamen Rider) and requested “that you immediately remove or disable all access to all links” to the subtitled releases. 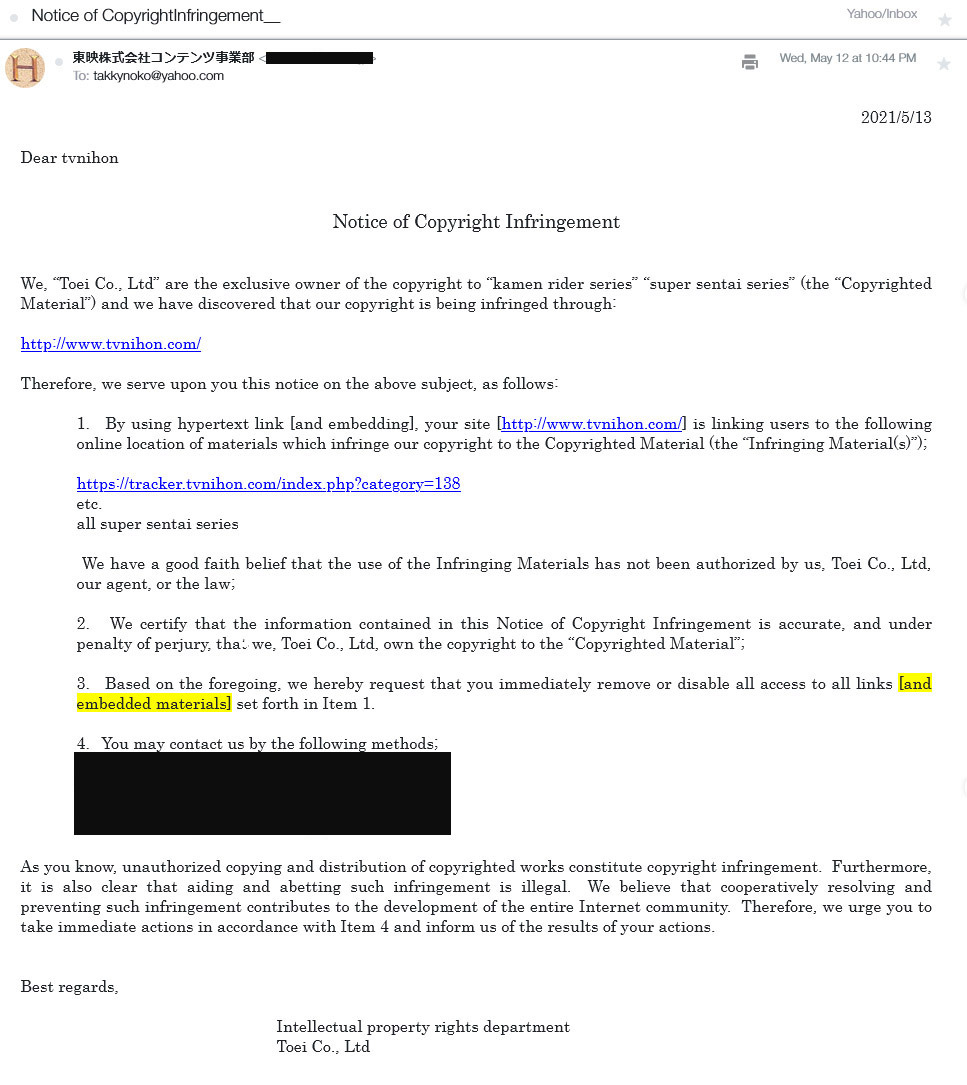 In addition to TV-Nihon, similar letters were also reportedly received by fellow fan sub groups KRDL and New-ZECT, the latter of whom specifically produces Portuguese subtitles for each show.

Notably, fan subbing group Over-Time has apparently yet to receive such a letter from Toei. 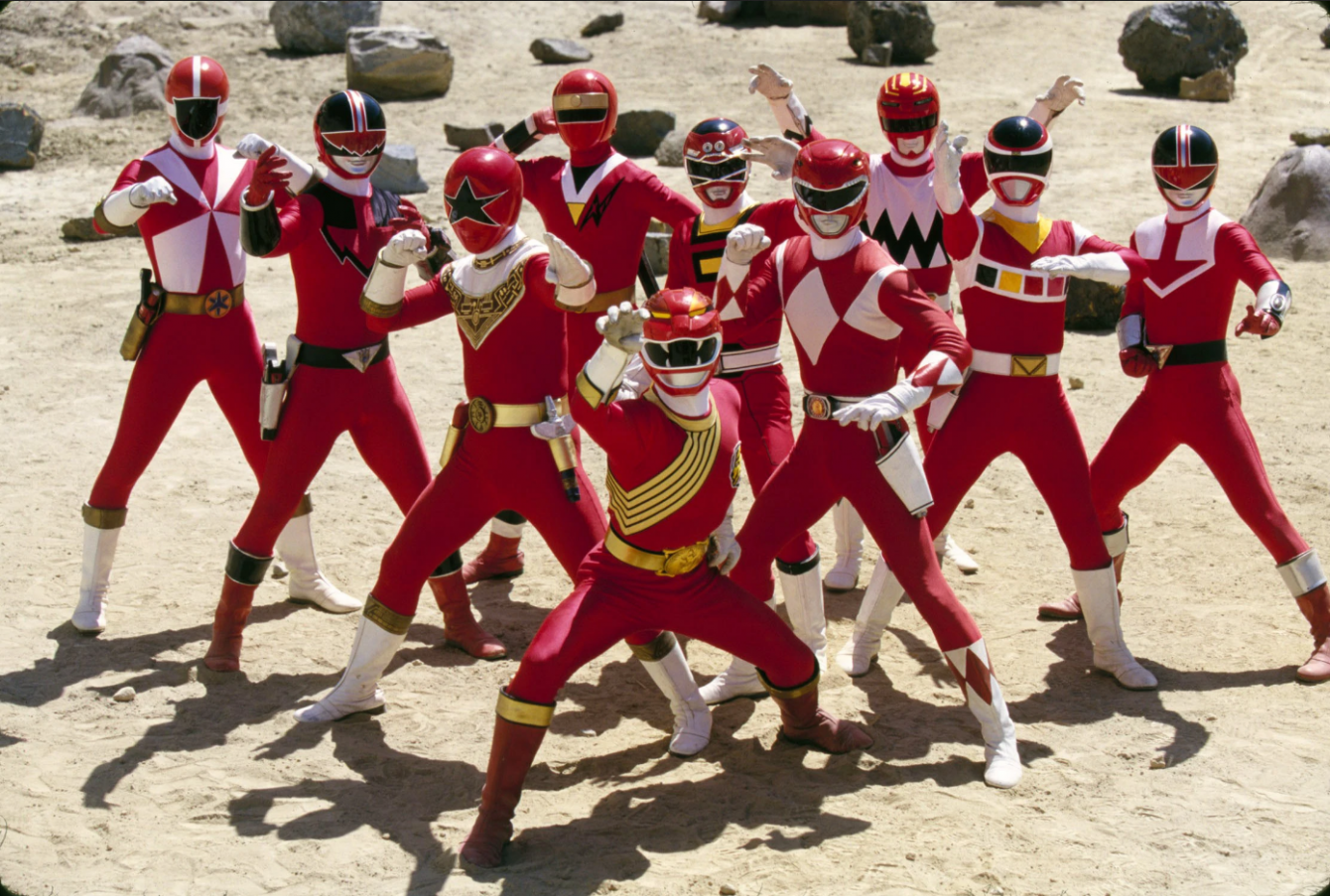 As of writing, members of the relevant fan sub groups are currently working to navigate the situation. However, playing things safe for the time being, TV-Nihon has complied with Toei’s request and removed the specified torrents from their site.

What do you make of Toei taking action against Super Sentai and Kamen Rider fan subbers? Let us know your thoughts on social media or in the comments down below!