The Sandman creator Neil Gaiman provided explanations for a number of the casting decisions that were recently announced by DC Comics and Netflix for the upcoming live-action The Sandman series. 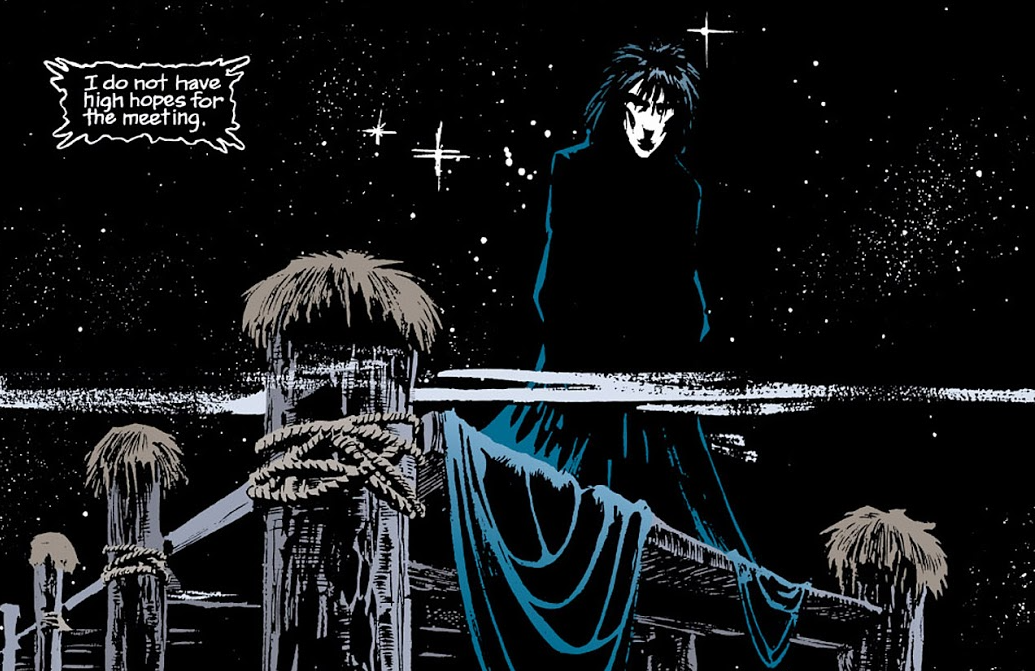 Netflix announced their new additions to the cast on Twitter. 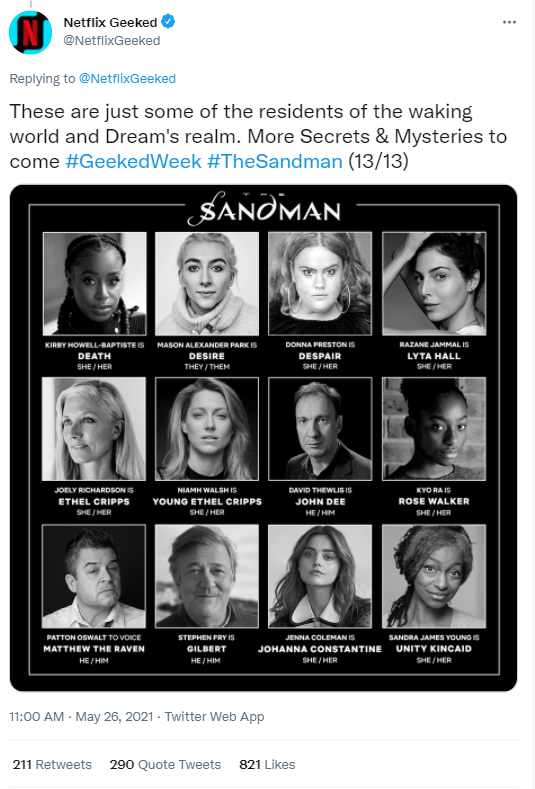 In a press release from Netflix, Neil Gaiman detailed more about the characters and the casting process.

Death is described as “Dream’s wiser, nicer, and much more sensible sister.”

Gaiman then discussed the casting process, “Significantly harder to cast than you might imagine (well, than I imagined, anyway). Hundreds of talented women from all around the planet auditioned, and they were brilliant, and none of them were right.”

He continued, “Someone who could speak the truth to Dream, on the one hand, but also be the person you’d want to meet when your life was done on the other. And then we saw Kirby Howell-Baptiste’s (she/her) audition and we knew we had our Death.” 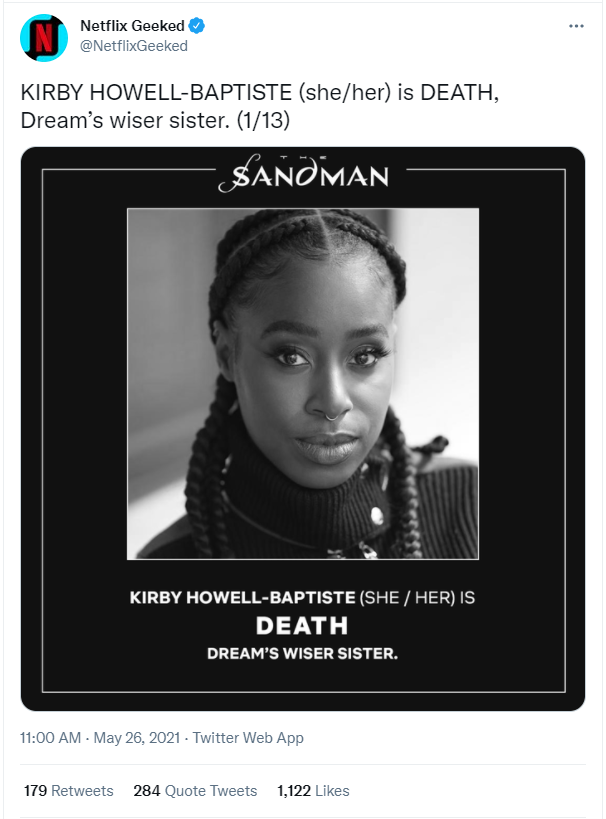 Death was originally inspired by Cinamon Hadley. In The Sandman Companion, Gaiman explained, “Death is the only major character whose visuals didn’t spring from me; that credit goes to Mike Dringenberg.”

He continued, “In my original Sandman outline, I suggested Death look like rock star Nico in 1968, with the perfect cheekbones and perfect face she has on the cover of her Chelsea Girl album.”

“But Mike Dringenberg had his own ideas, so he sent me a drawing based on a woman he knew named Cinamon – the drawing that was later printed in Sandman #11 – and I looked at it and had the immediate reaction of, ‘Wow. That’s really cool,'” Gaiman relayed.

He then stated, “Later that day, Dave McKean and I went to dinner in Chelsea at the My Old Dutch Pancake House and the waitress who served us was a kind of vision. She was American, had very long black hair, was dressed entirely in black – black jeans, T-shirt, etc. – and wore a big silver ankh on a silver necklace. And she looked exactly like Mike Dringenberg’s drawing of Death.” 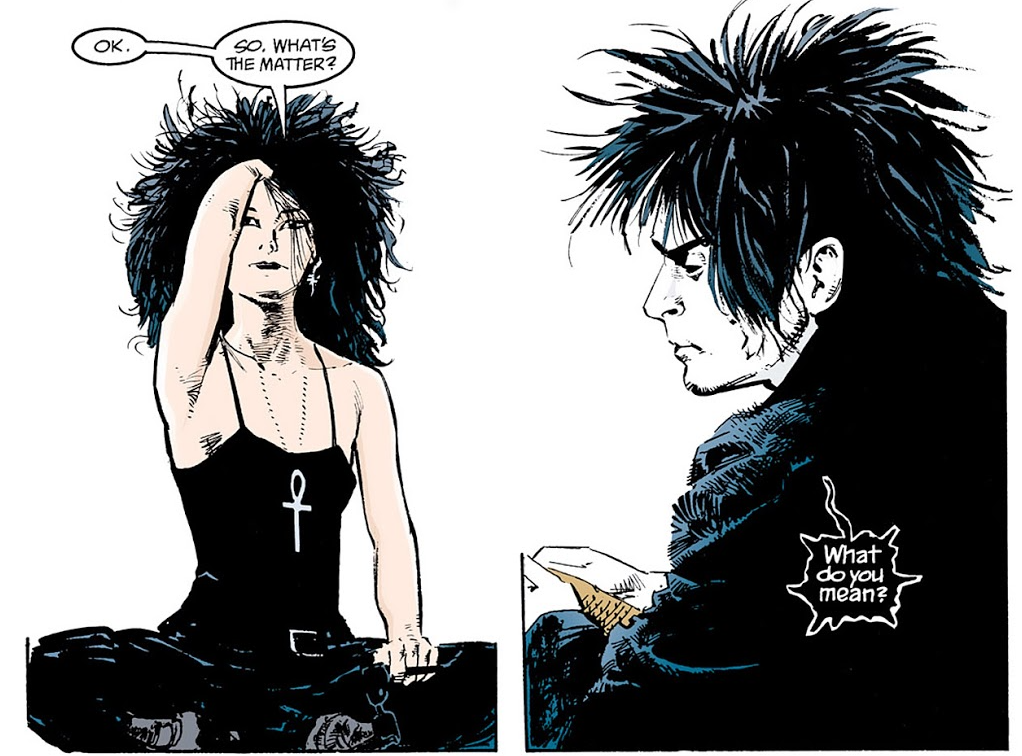 Related: Neil Gaiman Explains Why Lucifer Was Recast For The Sandman Netflix Series

Next he provided details on Desire, “Dream’s sibling and everything you want, whatever you want and whoever you are. Desire is also trouble for Dream. Families are complicated.”

As for the casting process he wrote, “We had barely started looking when Mason Alexander Park (they/them) reached out on Twitter, and threw their hat into the ring. We were thrilled when they got the part.” 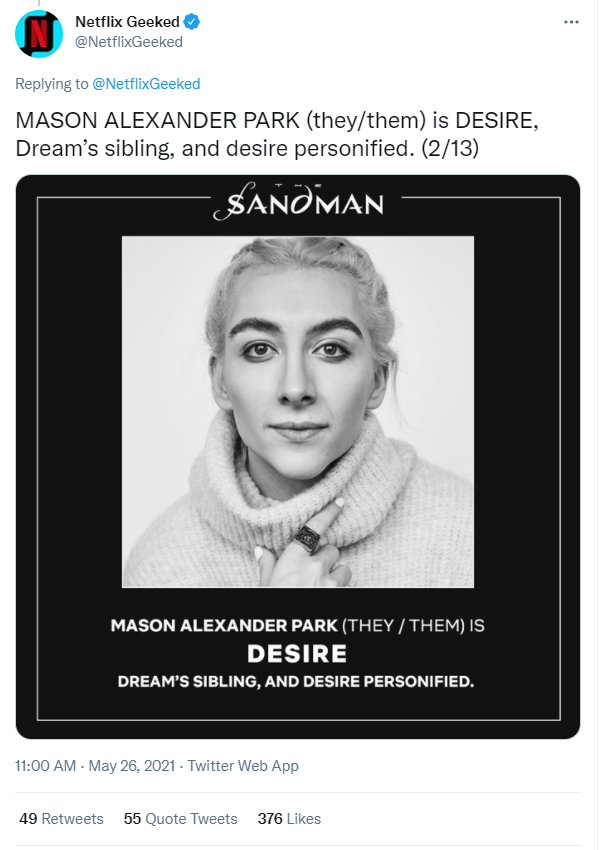 For Despair he wrote, “Desire’s twin, Dream’s sister. She is the moment when all hope is gone, the bleakest of the Endless.”

“Donna Preston (she/her) will be playing her, and her performance is chilling and sad. You feel her pain,” Gaiman wrote. 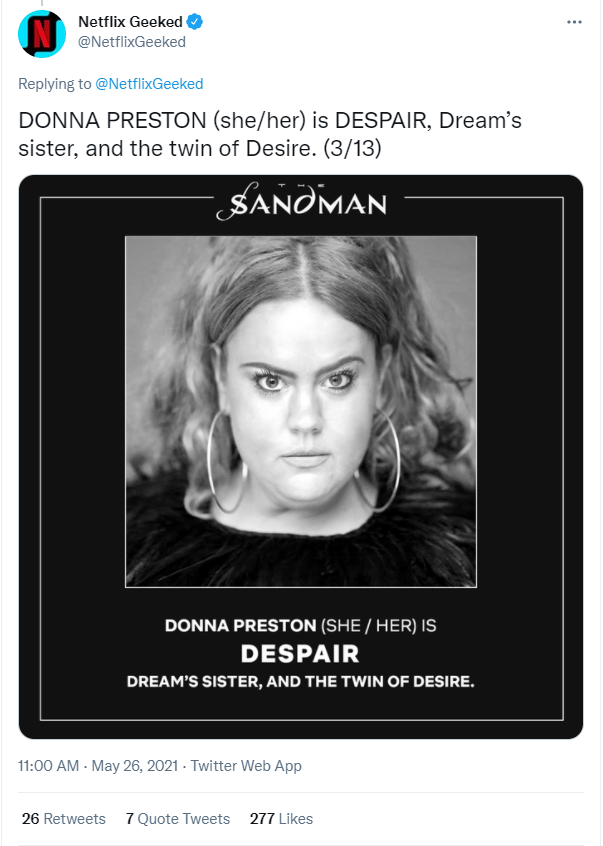 Gaiman provided a lengthy explanation for Johanna Constantine, “Eighteenth Century occult adventuress, John Constantine’s great-great-great grandmother. This Sandman character became so popular that she even had her own spin-off series. I created her to fill the role that John Constantine does in the past.”

He continued, “When we broke down the first season, given that we knew that we would be encountering Johanna in the past, we wondered what would happen if we met a version of her in the present as well. We tried it and the script was sparkier, feistier, and in some ways even more fun. So having written her, we just had to cast her.”

On the casting he wrote, “Jenna Coleman (she/her) gave us the Johanna of our dreams – tough, brilliant, tricky, haunted and probably doomed.” 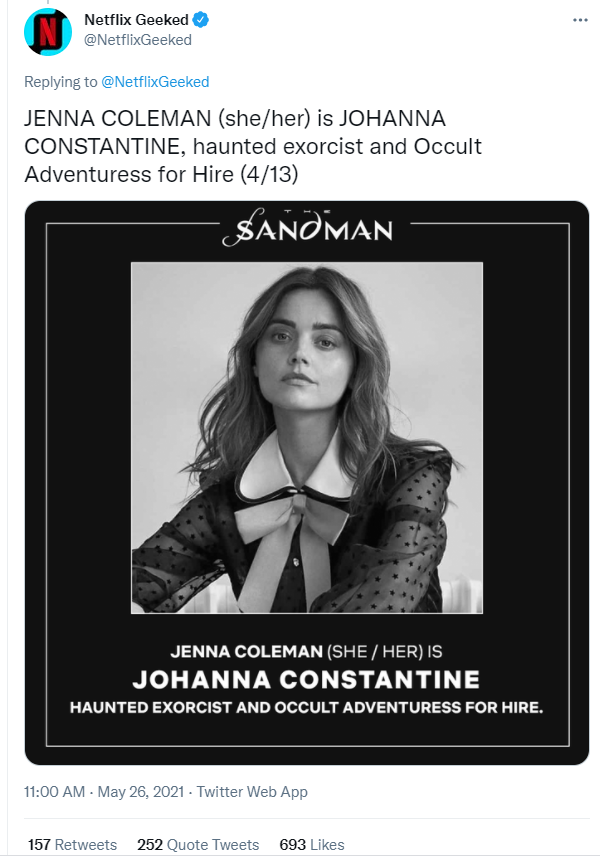 For Ethel Cripps he wrote, “Roderick Burgess’s love, John Dee’s mother, is a small but vital role in the comics, but she became more important as we told our story.”

As noted above the character is played by two actors. Gaiman broke it down, “In the 1920s and 30s, she is played by Niamh Walsh (she/her): a betrayed and determined young woman seeking to survive.” 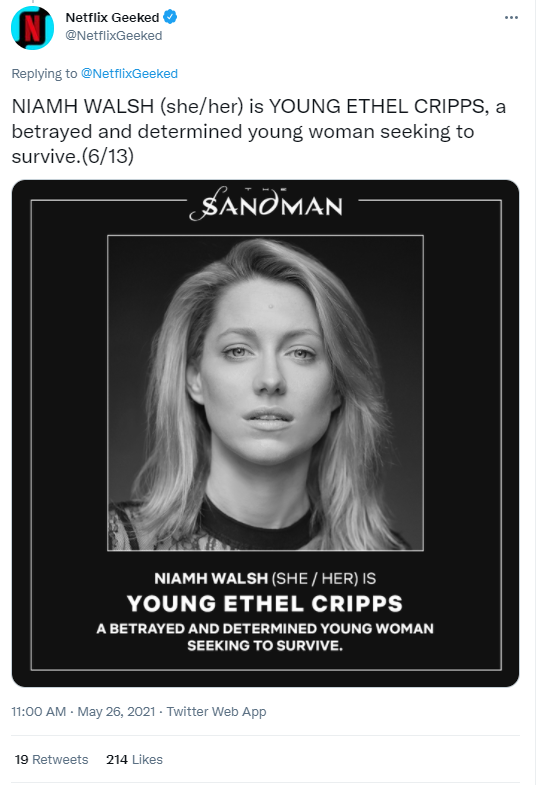 He continued, “In the present day, now a woman of a hundred identities and a thousand lies, she’s played by the brilliant Joely Richardson (she/her).” 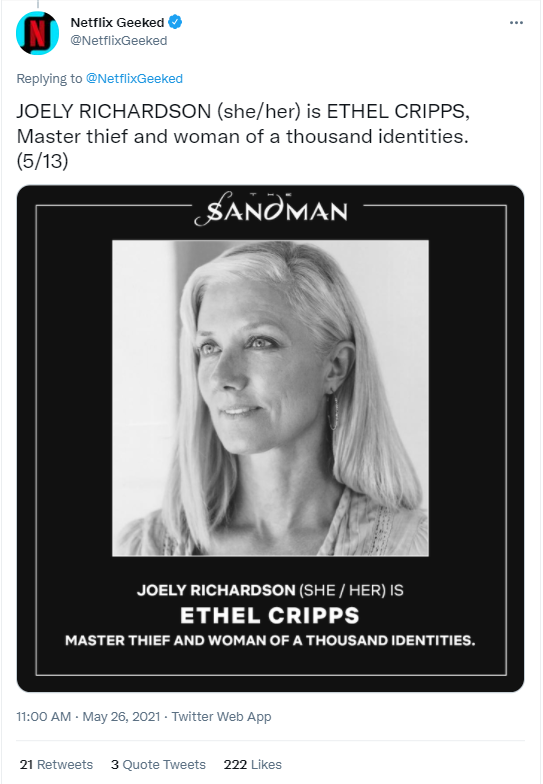 Gaiman then discussed John Dee. He stated, “Ethel’s son is dangerous. He was driven mad, long ago. Now he’s out and on a quest for Truth that may destroy the world.”

For the casting he wrote, “We needed an actor who could break your heart and keep your sympathy while taking you into the darkest places. We were lucky that David Thewlis (he/him) took the part.” 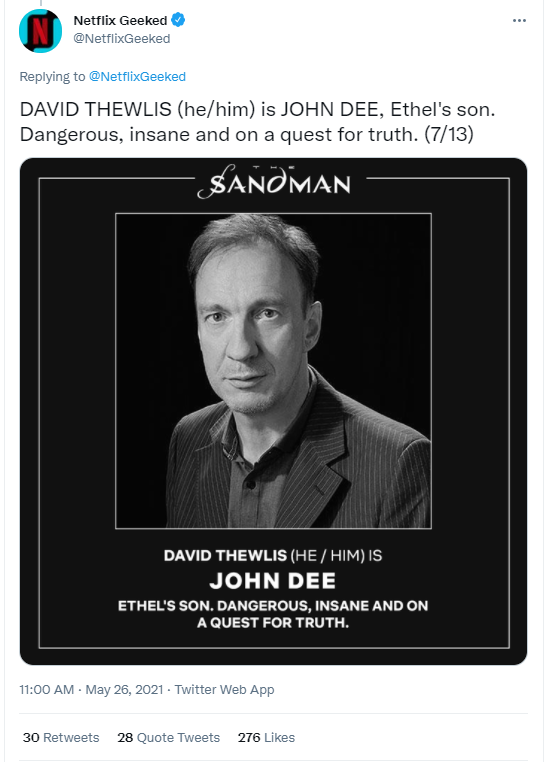 Then Gaiman discussed the characters and casting for The Doll’s House, which he describes as “the second big Sandman storyline.”

First up on the list is Rose Walker. Gaiman writes, “A young woman on a desperate search for her missing brother, who finds a family she didn’t know that she had, and a connection to Dream that neither of them can escape.”

For casting he explained, “We needed someone young who could make you care as she ventures into some very dangerous places. Boyd Holbrook’s Corinthian is waiting for her, after all. Kyo Ra (she/her) achieves that as Rose.” 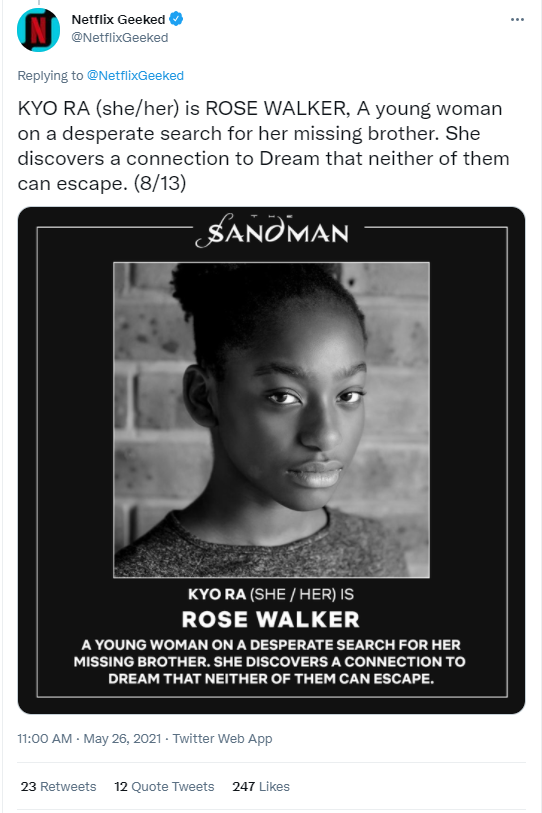 Next is Lyta Hall. Gaiman writes, “Rose’s friend, a young widow mourning her husband Hector. Rose doesn’t know that Hector has started showing up in Lyta’s dreams, though. Or that strange things are happening.”

Gaiman didn’t offer much of an explanation for this casting. He just stated, “Razane Jammal (she/her) is Lyta, and she’s terrific.” 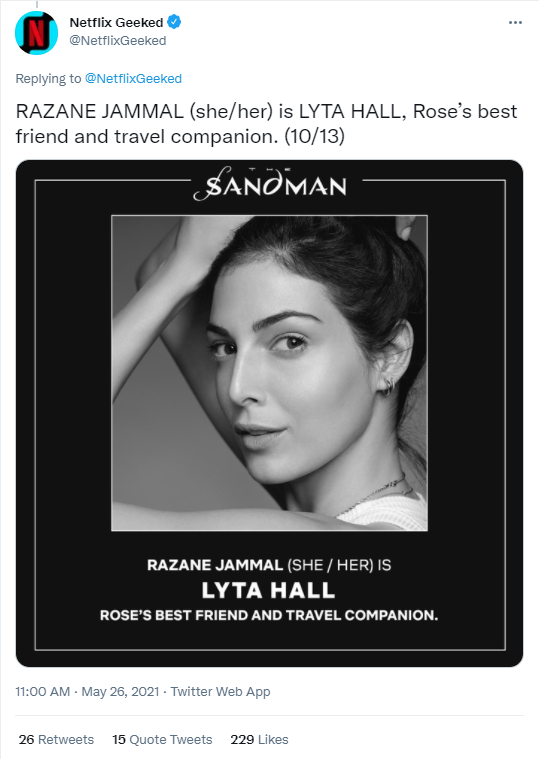 Unity Kincaid is next. Gaiman details her character, “Heiress, Rose’s mysterious benefactor. She has spent a century asleep. Now she’s awake, having missed out on her life.”

Again not much info on the casting for her. He simply writes, “She’s played by Sandra James Young (she/her).” 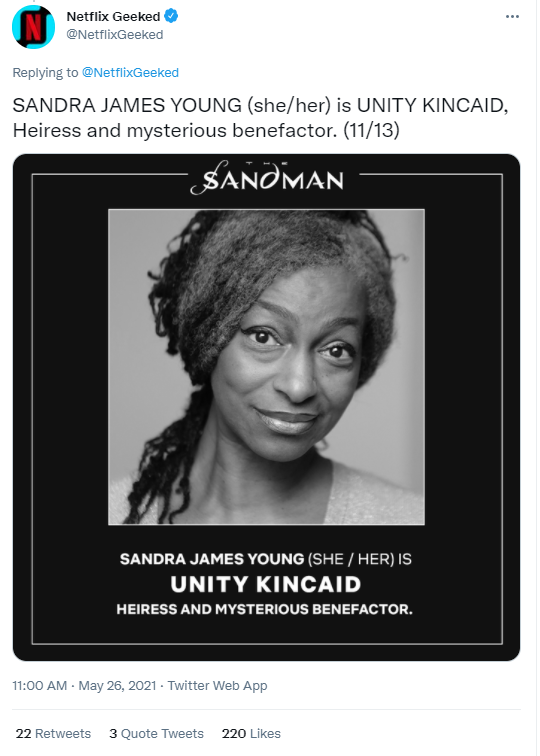 Next is Gilbert. He’s described as “Rose Walker’s debonair protector. A dab hand with a paradox and a sword cane.”

For casting, Gaiman wrote, “Stephen Fry (he/him) is a National Treasure, and we forget sometimes that he’s also a remarkable actor. Seeing him in costume and make up on the dailies made me blink: it was as if the comic had come to life.” 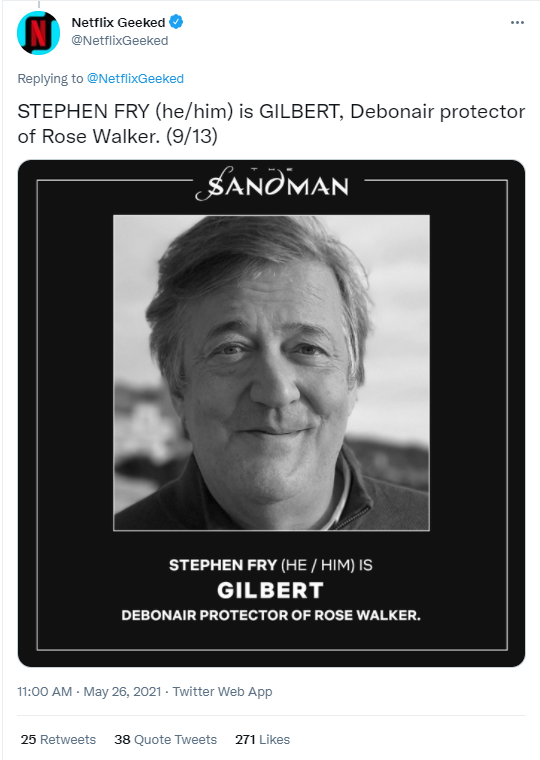 Finally, Gaiman discussed Matthew. He wrote, “Dream’s trusted emissary. A raven. I expected our animals to be CGI, and was both taken aback and thrilled when the dailies started coming in, and there was Dream talking to… well, a raven. But ravens don’t really talk.”

Gaiman then discussed the casting while also providing more details on the character, “The question was, could we find an actor who could make you care about a dead person who was now a bird in the Dreaming – one who isn’t certain what’s going on, or whether any of this is a good idea?”

He continued, “And could we find a voice performer who was also the kind of Sandman fan who used to stand in line to get his Sandman comics signed? The answer was, we could if we asked Patton Oswalt (he/him). And Patton was the first person we asked, and the first person we cast, the day before we pitched The Sandman to Netflix.” 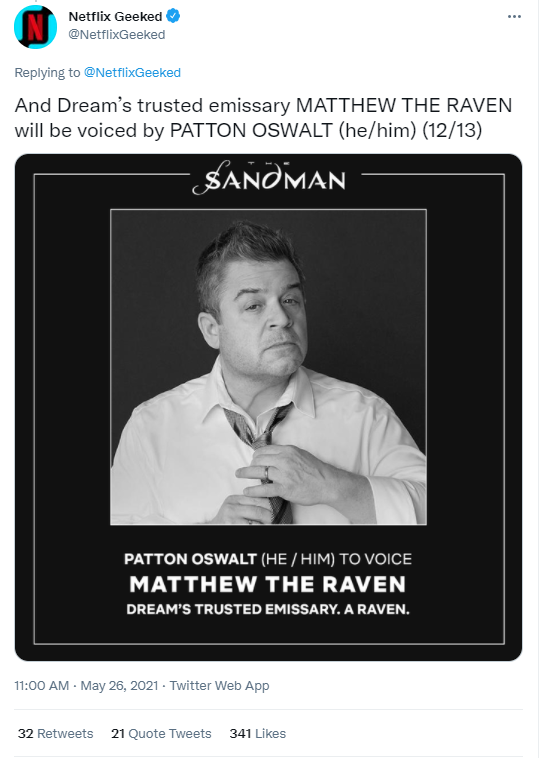 What do you make of Gaiman’s explanations?