Heavy Metal Magazine first shared the cover to Instagram to promote an interview with Stephanie Phillips with CBR about the finale and her plans for Taarna and the new armor.

If you are unfamiliar with Taarna, Heavy Metal Magazine’s official description reads, “Taarna is the last living Taarakian, and the guardian of our universe. A hybrid being born of the great warrior Taarnak and a dying universe, Taarna is the personified form of one of the youngest universes in the multiverse.”

They add, “With her flying steed, Avis, and armed with her sword, Novera, Taarna travels from world to world protecting the universe from the threat of Kako, the embodiment of evil.”

“Taarna removes all the weeds that threaten the health of her universe, which is a cosmic garden from her point of view,” it concludes. 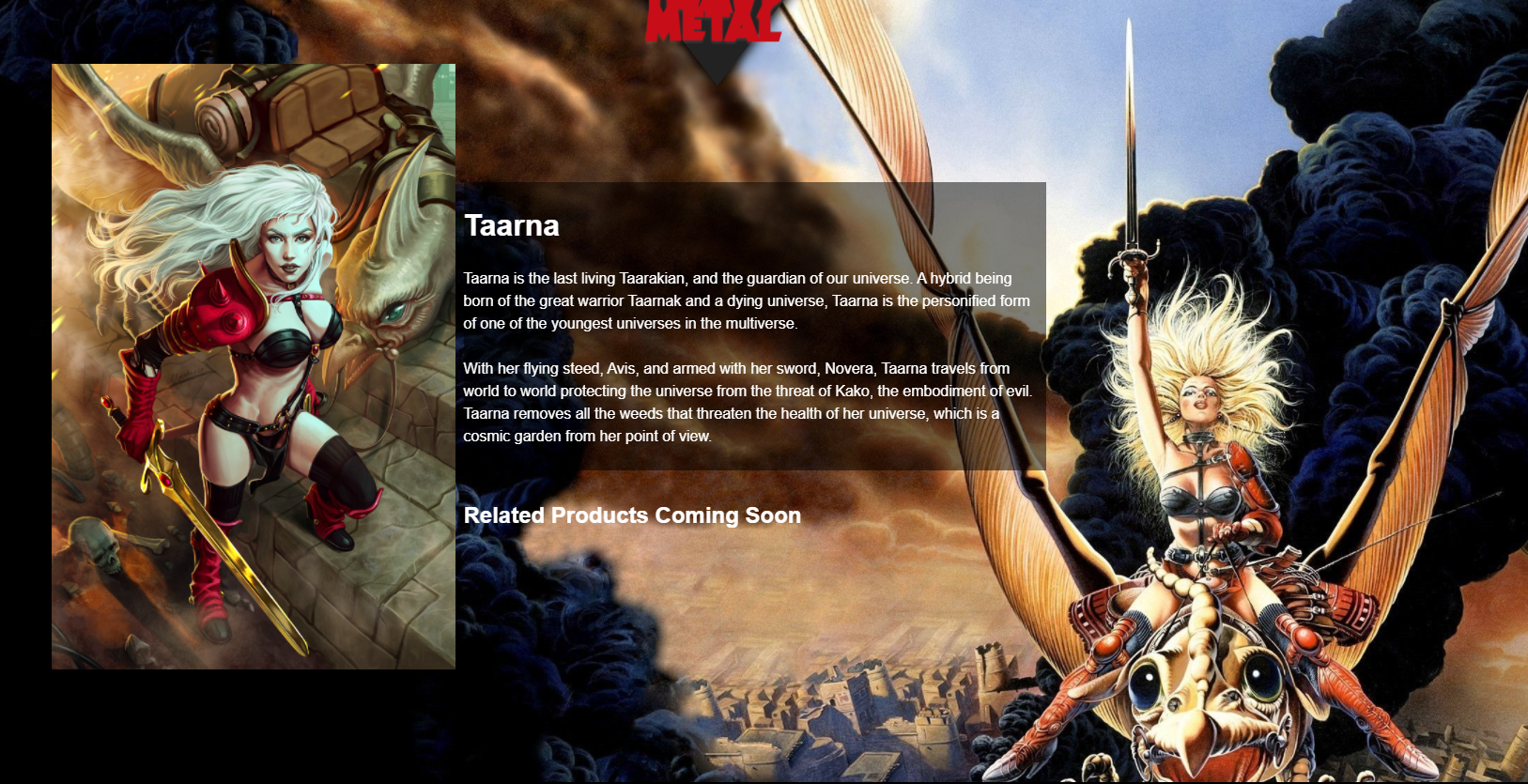 As you can see Taarna is typically depicted in a bikini outfit with a pauldron and gauntlet on her right arm. However, that changed in Taarna #5, where she put on a full suit of armor.

Speaking with CBR, Phillips discussed designing the new battle armor for issues #5 and #6.

Phillips explained, “One really cool element to the finale was getting to design new battle armor for Taarna (for issues #5 and #6).”

“Al [Barrionuevo] and Bryan [Valenza] created some of the coolest armor for Taarna that I hope we get to see beyond the issues we worked on together. It’s such a cool look. Both Al and Bryan are incredibly talented and a great team to close out the story with,” she added. 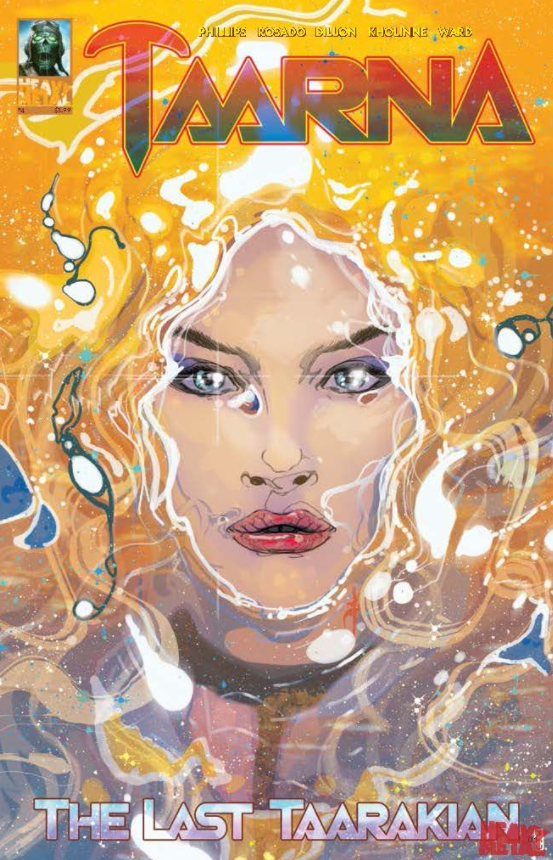 As noted by Phillips, Taarna does don the armor in the interiors of Taarna #5. She does so after she was severely injured in Taarna #4 following a fight with a giant serpent.

In that issue, while fighting the serpent she was still wearing her iconic look as you can see below. 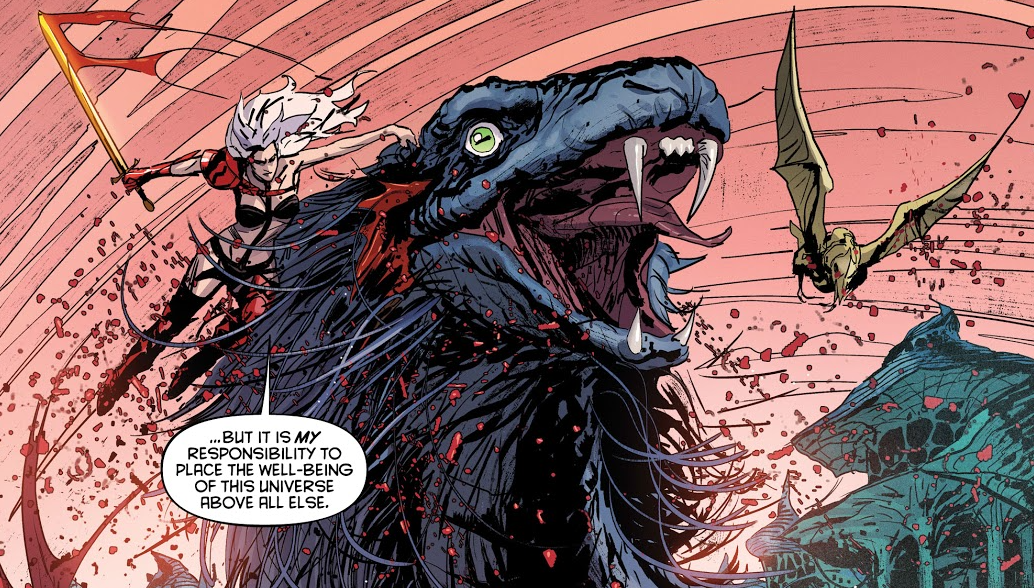 After recovering from her injury at a temple at the edge of the universe, Taarna puts on her new armor as she prepares to hunt down Urcuss, who leads an army in service to Kako, the embodiment of evil.

Aside from being injured against the serpent, the only explanation for the armor is that she needs to be prepared as she hunts down Urcuss. 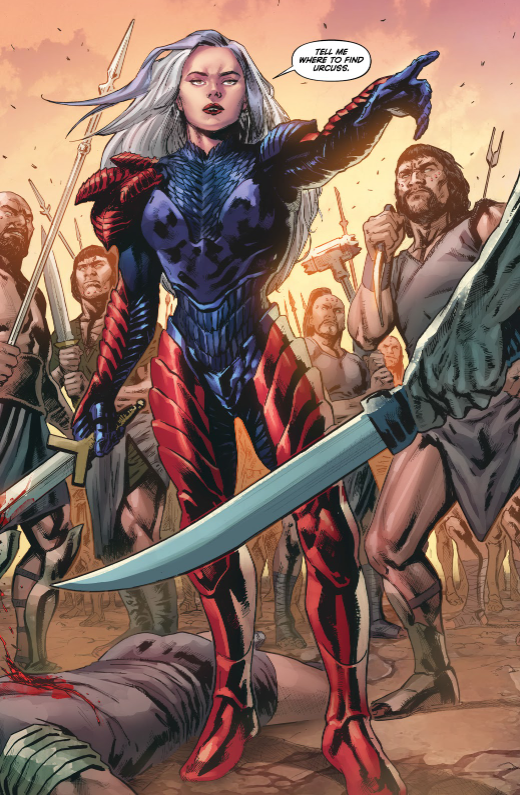 In fact, even with the armor she is shown beaten down. So it didn’t really do much for her in the fifth issue. 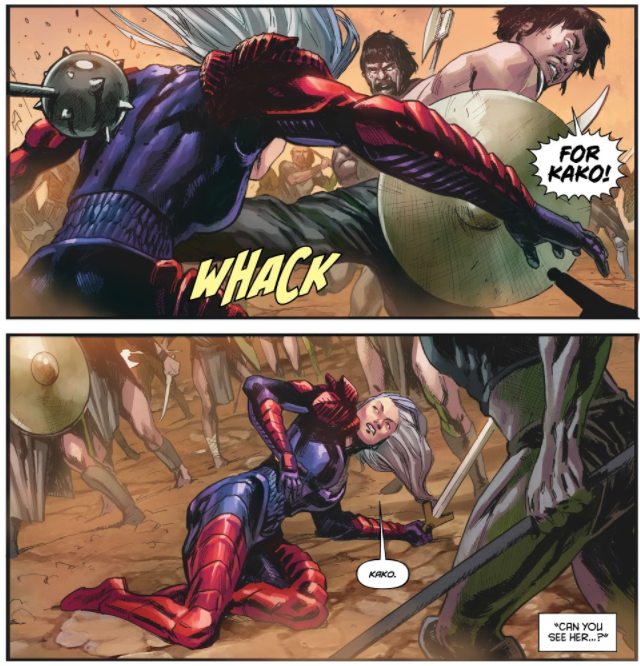 In response to a number of fans on their initial Instagram post, Heavy Metal clearly mocked them.

One user who wrote, “They finally cover she up.”

Heavy Metal responded, “Most people have more than one outfit it turns out.”

Heavy Metal responded, “Does changing clothes kill people? We had no idea. Do you not change your underwear? This explains so much.” 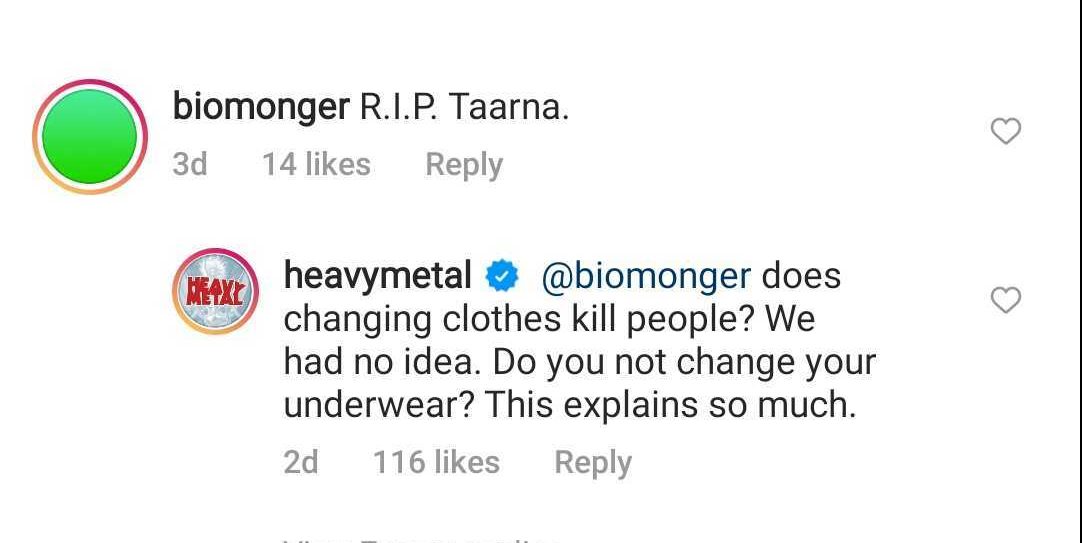 One wrote, “I’m torn. While I generally despise bikini armor as a whole, I also have a pretty severe disdain for the complete changing of iconic characters and looks. At what point does it become an entirely different character, and where exactly is the ridiculous line for scantily clad heroines?”

Heavy Metal answered, “Have you read the book to understand the context of the outfit or you just masking assumptions? Trust us, read it and you will understand. Also people should change clothes and looks that’s natural.” 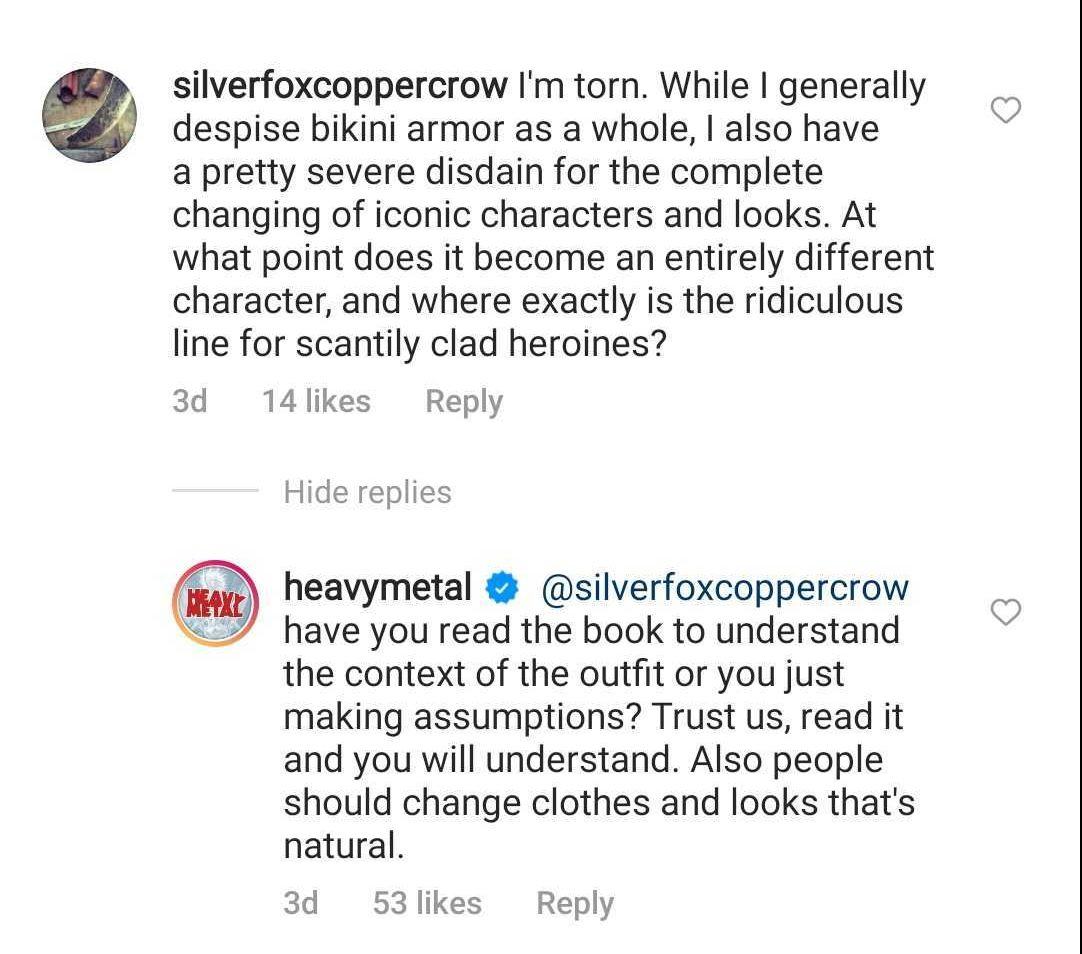 As noted above, the change in outfit doesn’t really make sense from a story point as she goes from getting injured by a giant serpent to fighting a completely different enemy.

Nevertheless, Heavy Metal would use this line in multiple responses. 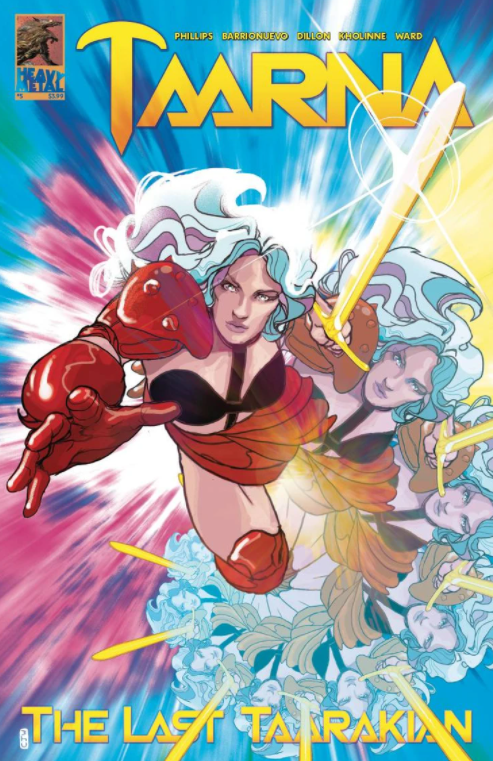 As you can see below, it reads, “It has come to our attention that some of you are confused that Taarna has the ability to change clothes. so to address this.”

They continued, “We’d like to remind you that you too can change clothes and to please do so, especially your underwear, we’ve gotten complaints from the neighbors.”

Along with this message they also added, “An official statement, relax guys it’s just armor. We know change is scary but you got this. This is Heavy Metal we have always experimented and pushed the envelope because that’s art, it changes grows and evolves. We have and always will push the boundaries of art, storytelling and culture.”

They added, “If you are uncomfortable with change and growth then you will go the way of the dinosaur, instead we encourage you to open your mind and take that ride on Heavy Metal.”

Needless to say, fans weren’t happy with this response either.

One person wrote, “The changes suck. Respect your fans.”

Heavy Metal responded, “no. We don’t want fans like that. We are good. Thank you.” 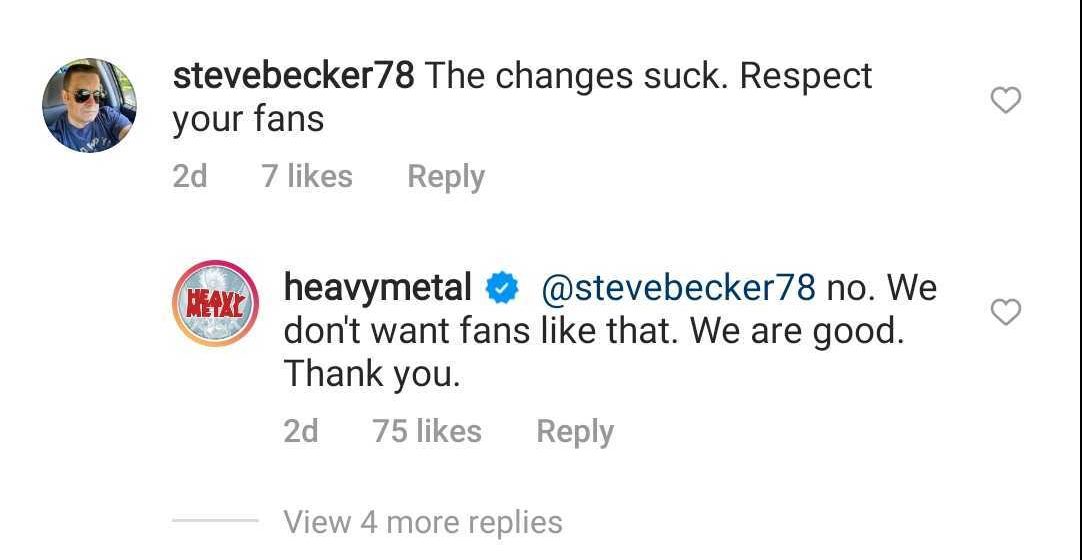 In response another fan, Heavy Metal wrote, “We did not change it for any political reasons, we did it because it made sense in the story and gave the character a chance to grow. This is all pretty clear if you read the series.” 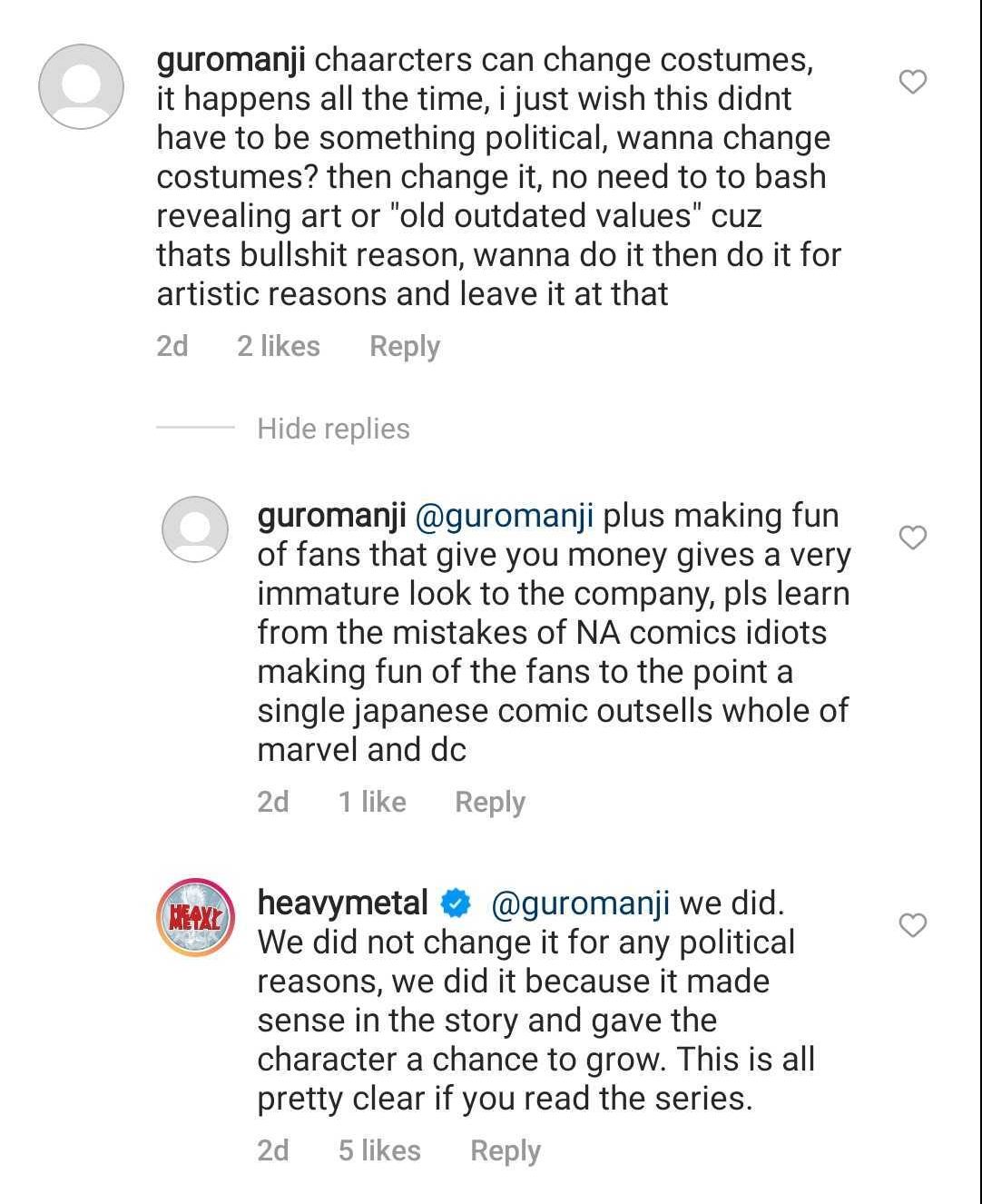 Again as noted above, this argument doesn’t really make sense.

Another fan wrote, “The NEW people running Heavy Metal must really hate their fans. Why do you hate us?”

Heavy Metal responded, “Think about your question realistically. You are an adult (we assume) would it make sense for a company that works so hard to create and bring new art to hate it’s fans? Or are you just uncomfortable with change and growth? Do you hate us because we’ve grown out of the box and your comfort level. Sit with that. We love our fans but they can either grow up with or stay behind clinging to an idealized past.”

Remember, in a previous response they made it clear they didn’t want fans who didn’t like the new design. So they might not be hating them, but they certainly don’t want them actually being fans, which this response doubles down on.” 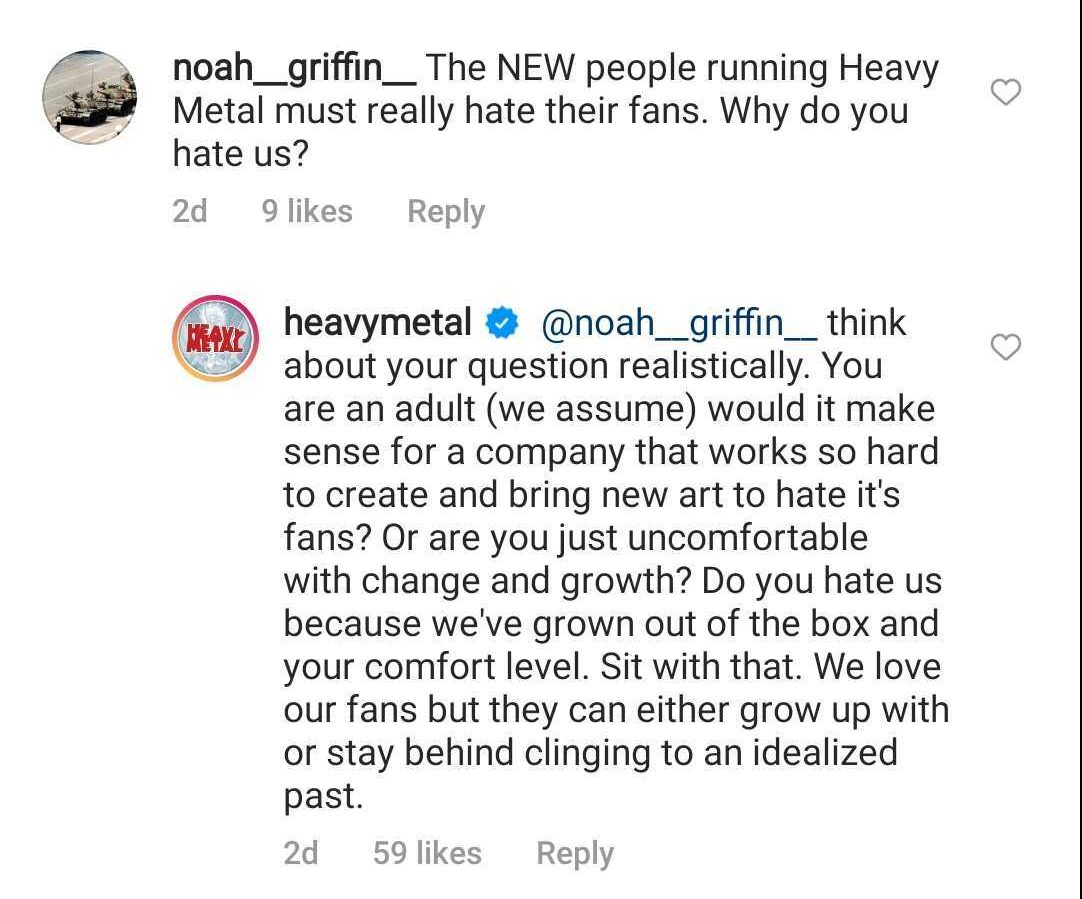 In this next response, they made it very clear they do not respect the fans who do not like the new armored design of Taarna.

A commentator wrote, “Cartoon lady wear more cloth now. How pee pee become big pee pee if can’t see lady skin? Outrage. Basically Pearl Harbor. Change lady back. Me only achieve orgasm if cartoon lady not wear many cloth. Not see real lady since kicked out of comic store in ’97 for ‘harassment.’ Stupid Stacy. She just made because she lesbian. Me have big pee pee and drive cool truck.”

Heavy Metal responded, “This is sadly close to some of the responses.” 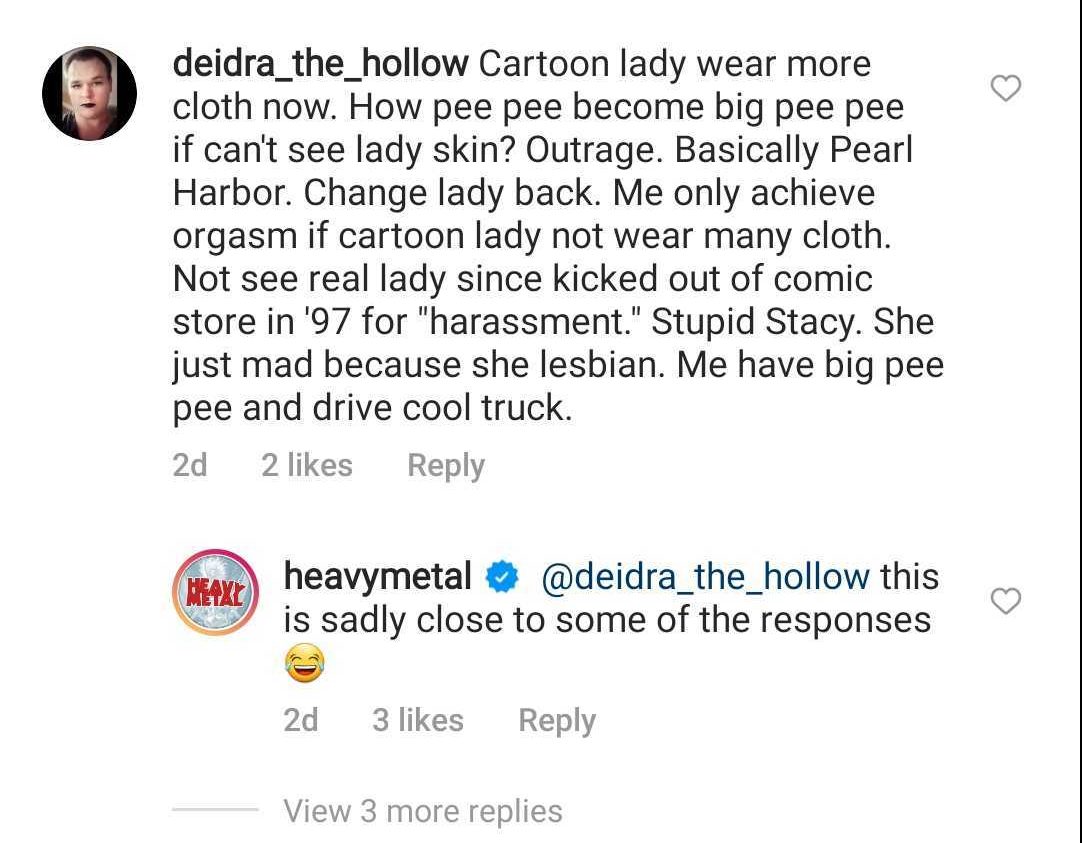 In this last example, one person wrote, “No, you relax. Being afraid of a mob of sociopaths, who try to cancel every drop of sexualization is concerning. Yer So called going forward is nothing but a cheap excuse, since new armor’s style is so old fashioned. Moving forward my balls.”

Heavy Metal responded, “no one is afraid here. The change in outfit is part of the story line as an ‘author’ I’m sure you understand that. If you read the series you would know how silly your comment is.” 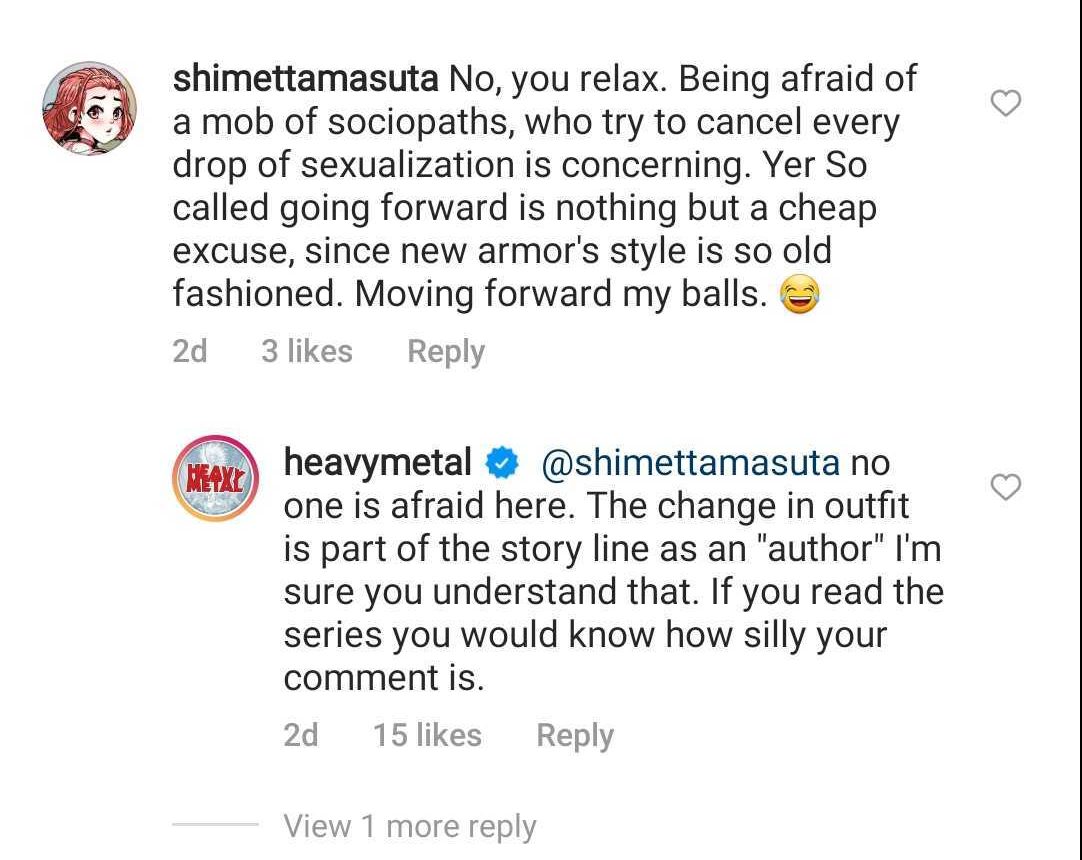 As noted above, Heavy Metal continues to try and defend the change as a story change, but if you actually read the story it doesn’t hold up.

What do you make of Heavy Metal’s mocking of their own fans?