Actress Ellie Kemper, known for her roles The Office and The Unbreakable Kimmy Schmidt, has been crowned the “KKK Queen” by the left-wing cancel mob after a picture from 1999, in which the actress can be seen winning the title of Veiled Prophet Queen of Love and Beauty at that year’s Veiled Prophet ball event, resurfaced online. 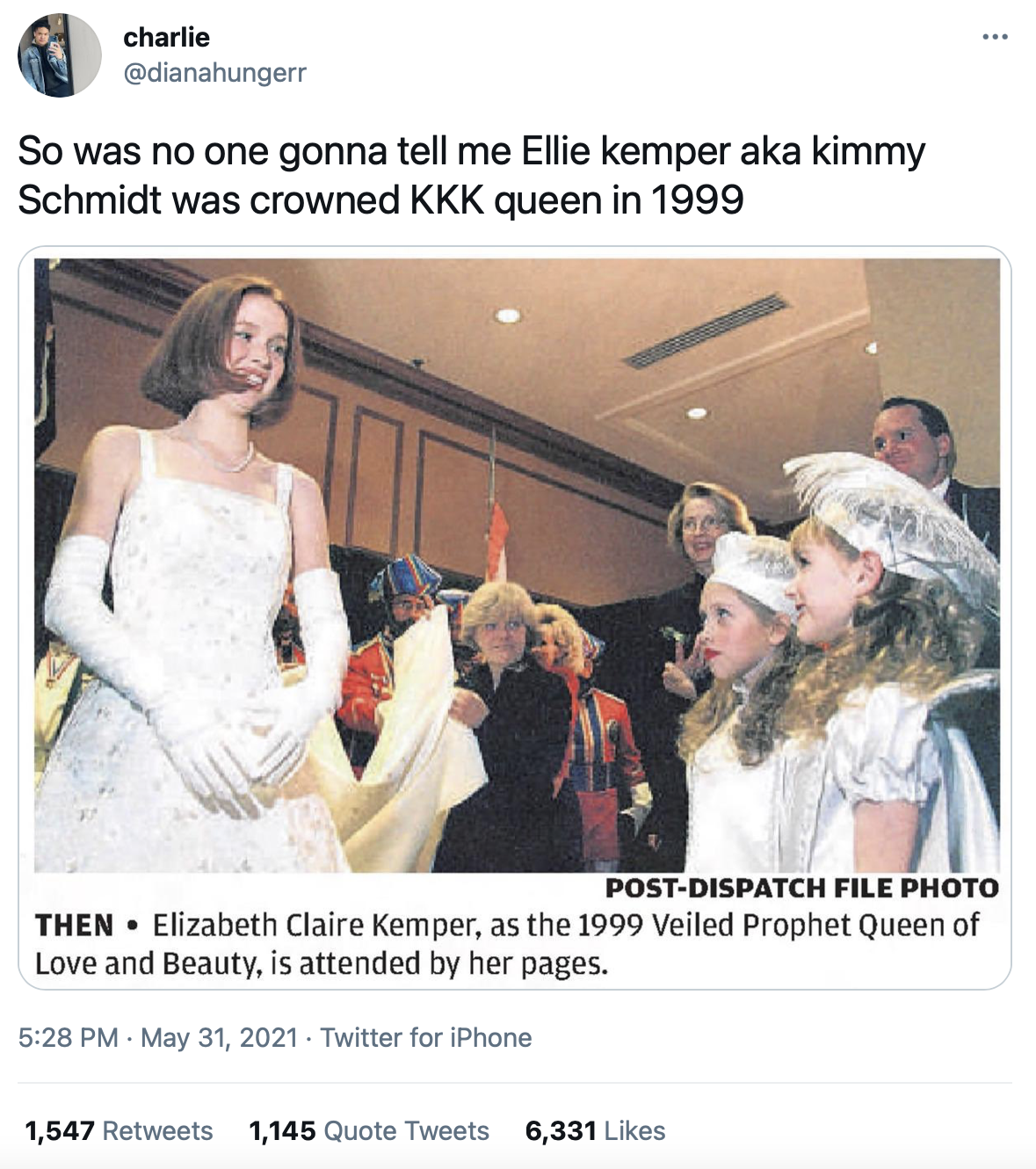 For those out of the loop, the Veiled Prophet Organization has had a long history of racism and white supremacy, in the past having not allowed either black people nor Jews to take part in the event. It wasn’t until fairly recently — 1979, to be more precise — that the organisation allowed black people to participate.

She added, “Nevertheless, nearly a century of protests by racial activists demonstrate that for many St. Louisans, the VPO’s uneasy relationship with race, in particular, has left it vulnerable to criticism.” 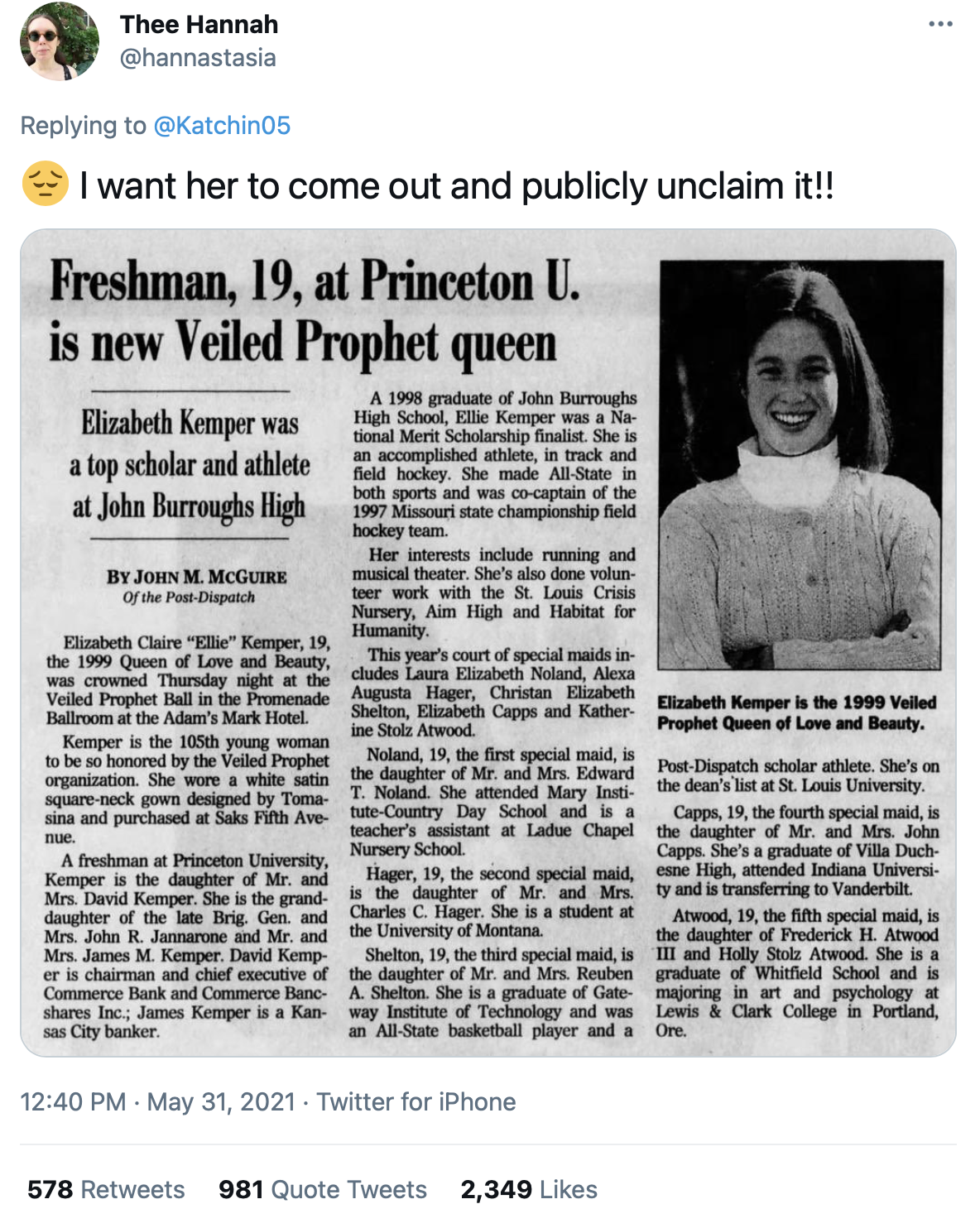 Since the picture of Kemper resurfaced on Twitter, the cancel culture mob has been having a field day, calling The Office actress out for her participation in the pageant over 20 years ago.

“Ellie Kemper the actress who played Erin Hannon on The Office and starred in The Unbreakable Kimmy Schmidt has been outed as a KKK Princess,” read a tweet by @HereIsMySpout accusing the actress of being part of the KKK. 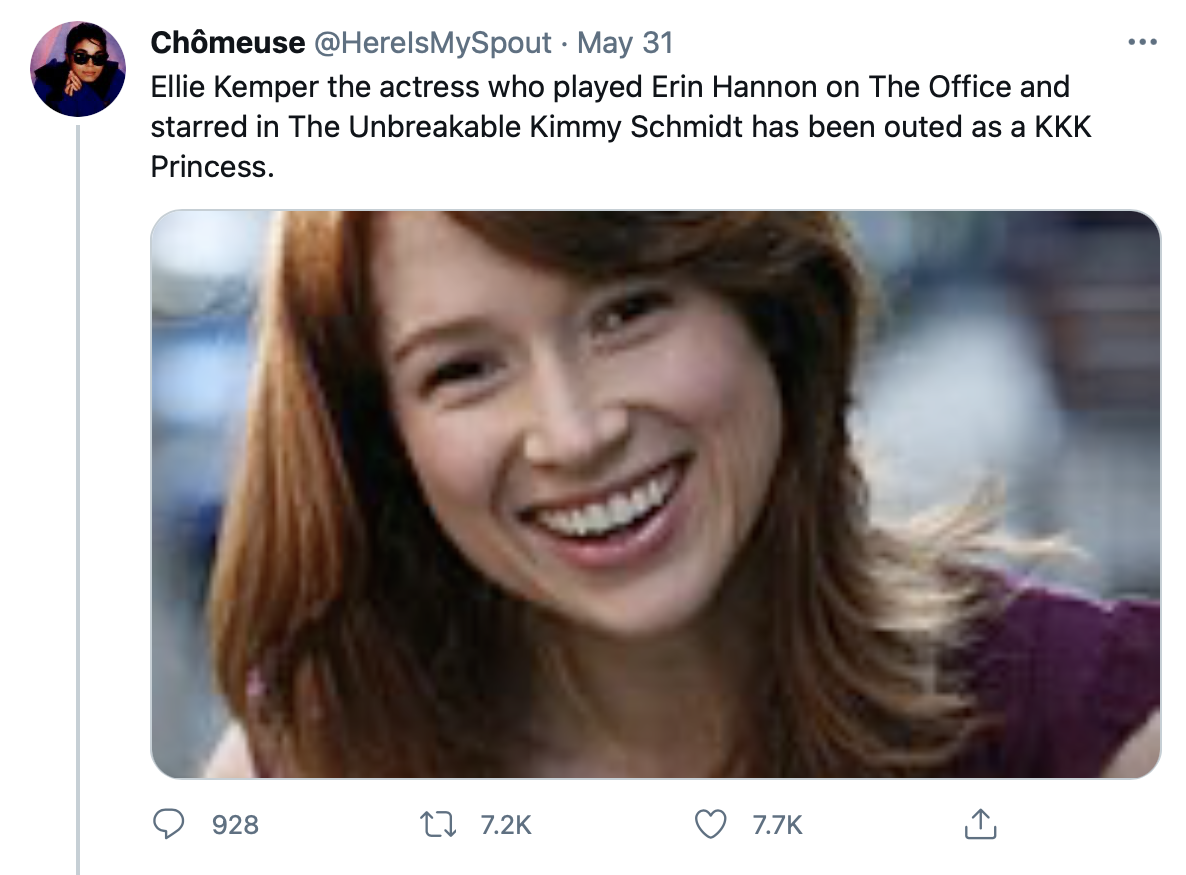 @doubleca5t wrote, “it’s obviously f***ked up that ellie kemper won prom queen at the st louis racism convention,” adding, “it’s also extremely funny to me that twitter airing her dirty laundry was apropos of nothing like someone woke up on this fine memorial day and just went ‘today I come for kimmy schmidt.'” 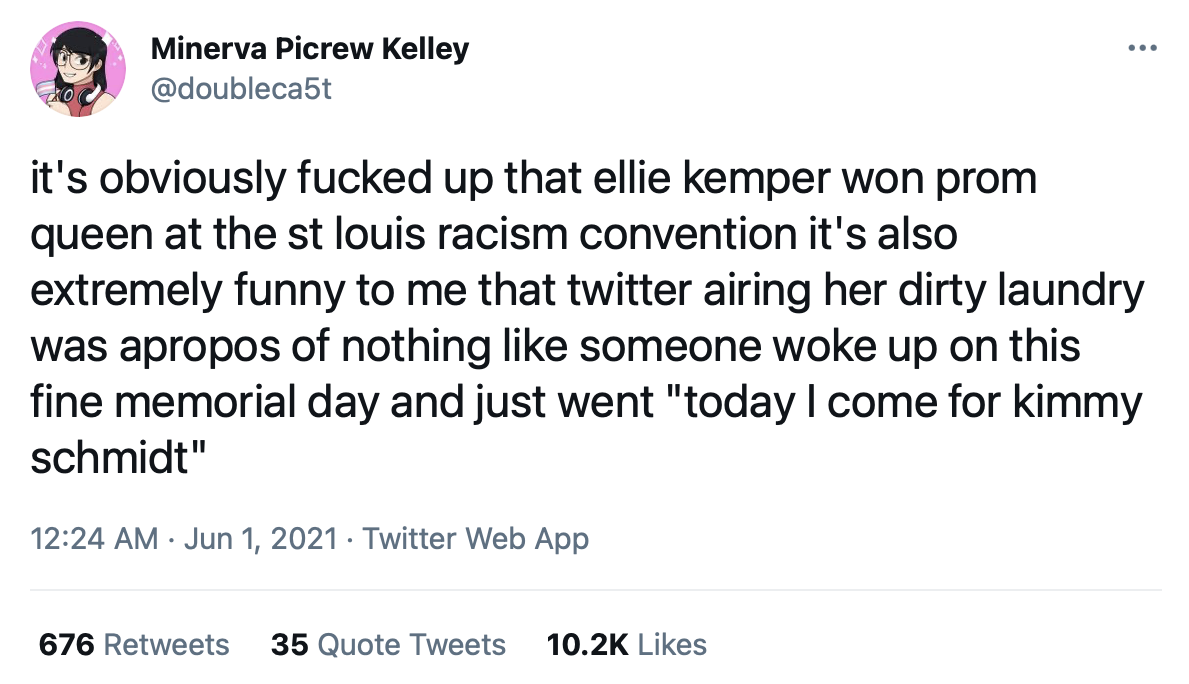 “Ellie Kemper was either in a racist cult or one of those ‘we’re so rich we just do weird s***’ groups,” said @ProbNotThatGuy. “She was either going to Purge parties or KKK rallies. Either way it’s not looking so good.”

“Not y’all defending Ellie Kemper for being in the KKK saying ‘she was only 19’ stfu,” fervently expressed Twitter user @morethanpilots. 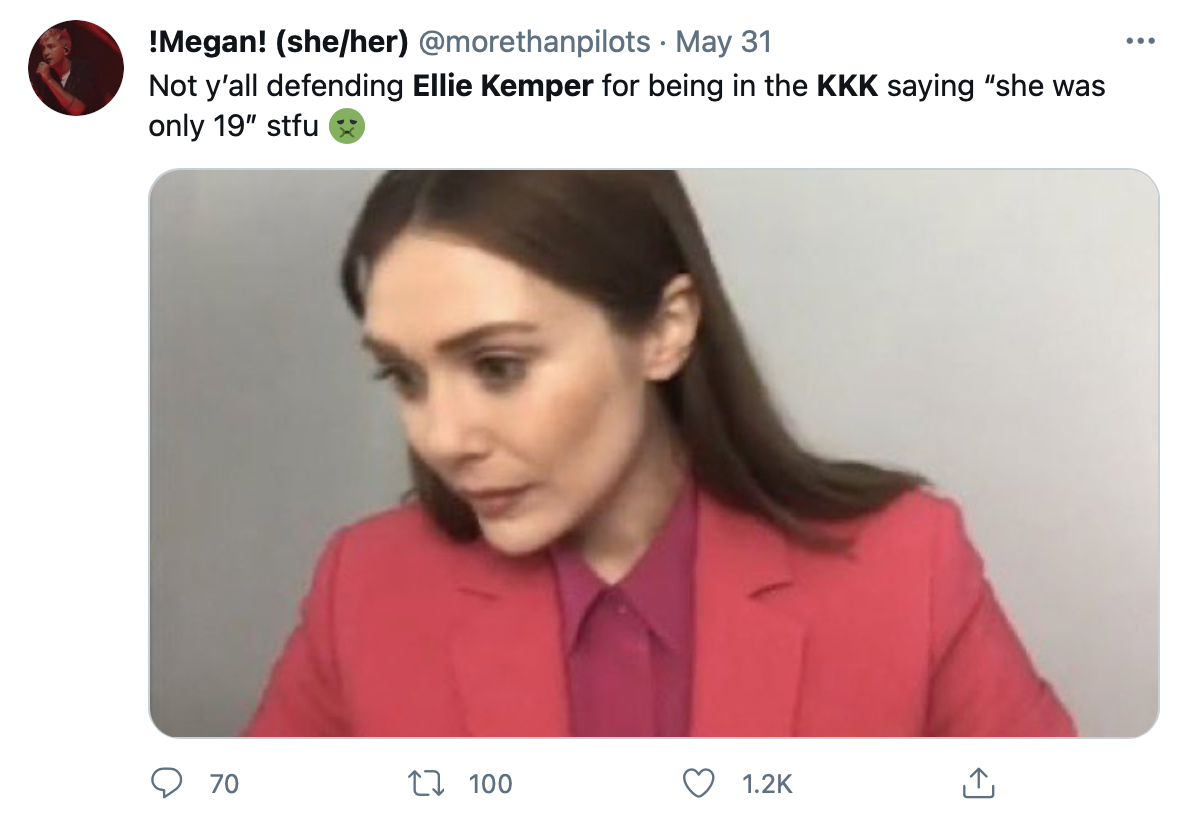 Claiming to have grown up privleged like Kemper, @GlascockMatilda gave an interesting take, stating, “as someone who did the rich kid private school bs here, i promise that 1. not many people know what veiled prophet is, but 2. everyone who DOES knows it’s racist.”

“That isn’t speculation lol,” she asserted. “She definitely knew.”

@StabbinsMcGee also brought up the actress’ upbringing, mentioning, “Ellie Kemper was a student at Princeton around the same time she won a KKK pageant.”

“It’s almost like the Ivy League continues to be a hotbed for racism and a key protector of America’s most destructive institutions,” they concluded.

“Can’t believe y’all didn’t know Ellie Kemper was part of a weird KKK cult focused on segregation and pedophilia,” read a tweet by @laborstruggle, who explained, “A lot of ppl have known this for years. It was on her Wikipedia lol”.

@laborstruggle then encouraged others to “Look it up,” asserting that the organisation was “A LOT crazier than even Twitter is making it out to be”. 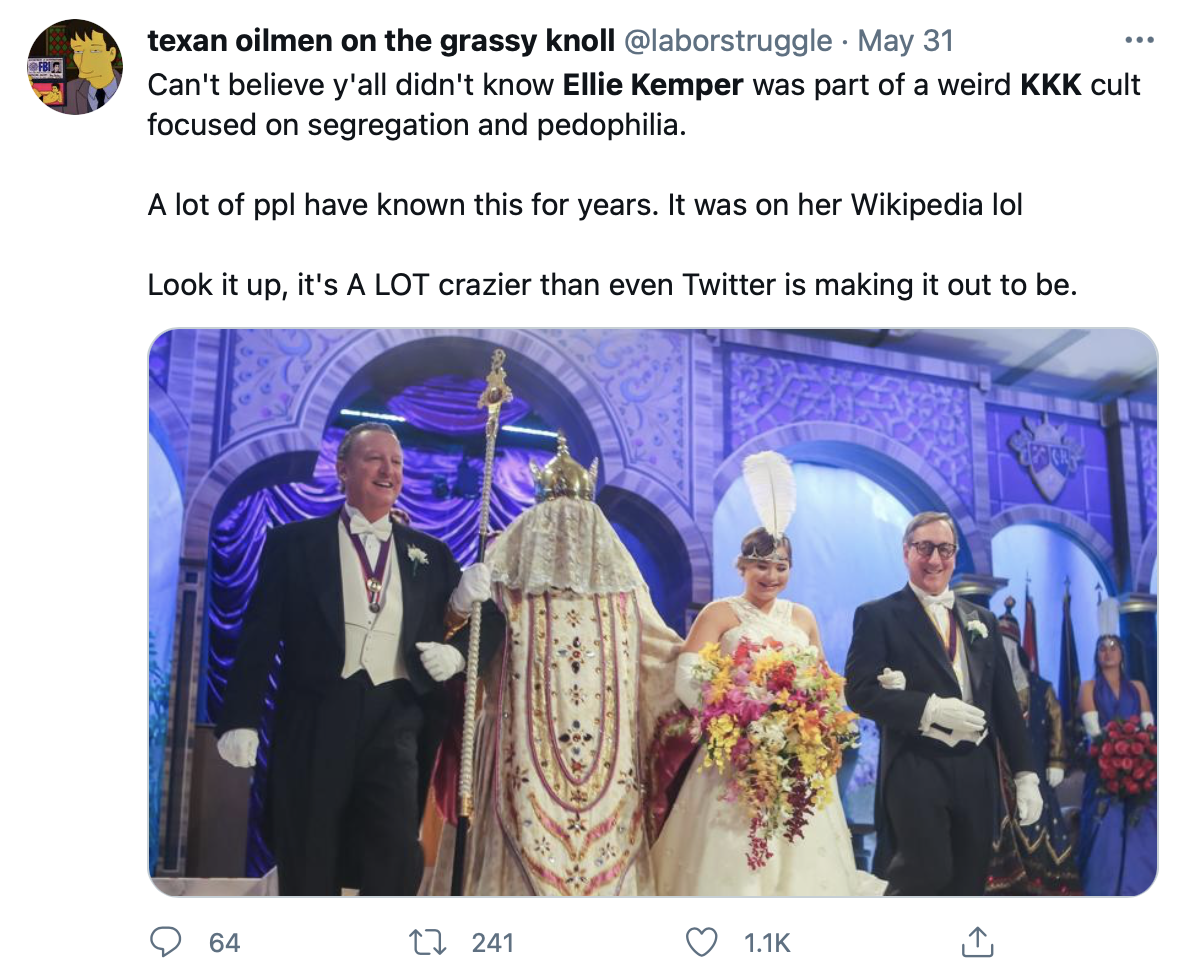 “Ellie Kemper is looking good for 41, which proves that the KKK made the right decision naming her a princess,” joked @haramcart. “Even a broken clock is right twice a day.”

Unwilling to either forgive or forget Kemper’s participation in the paegant, @Rendy_Jones stated, “Can’t wait for the inevitability of Ellie Kemper’s fellow co-stars to come out and try to defend her past like the Marvel bois did with Crisp Rat [Chris Pratt]”.

They added, “I’m sorry, there’s no way to defend a white woman who won a KKK pageant at 19 and went on to have a career in tv and film.” 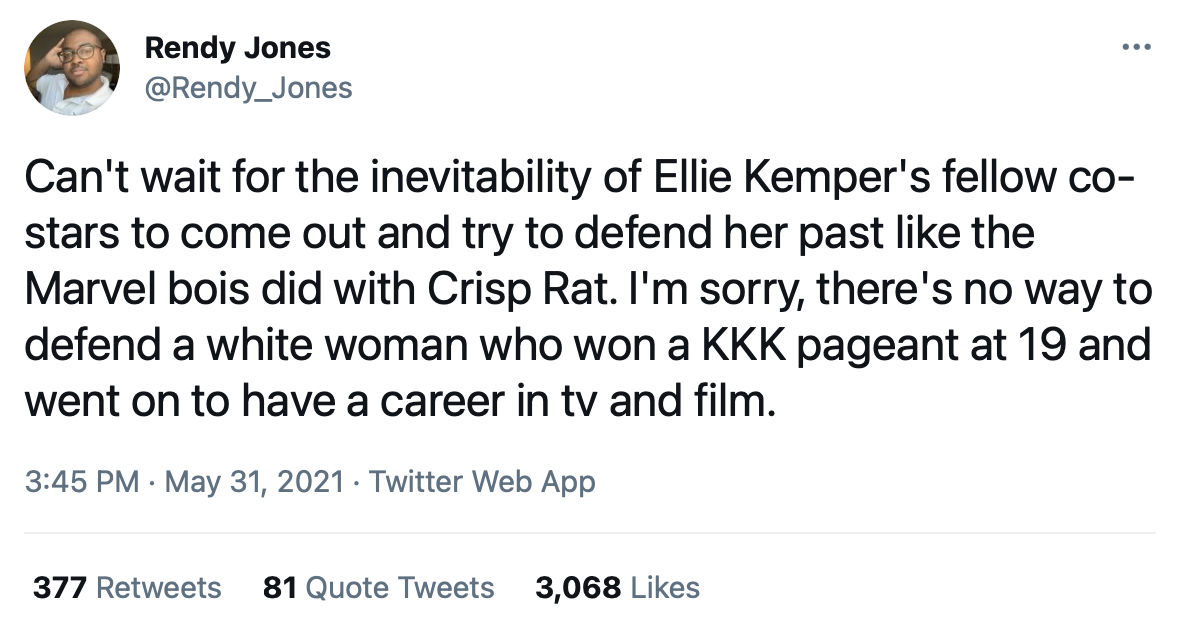 Matt Walsh brought up an interesting point, stating, “Ellie Kemper bowed to BLM and now they’re still trying to crucify her as a racist.”

“Serves her right, honestly,” he opined. “No sympathy for these people. If you feed the beast and then get eaten, oh well. It’s your problem. Have fun.” 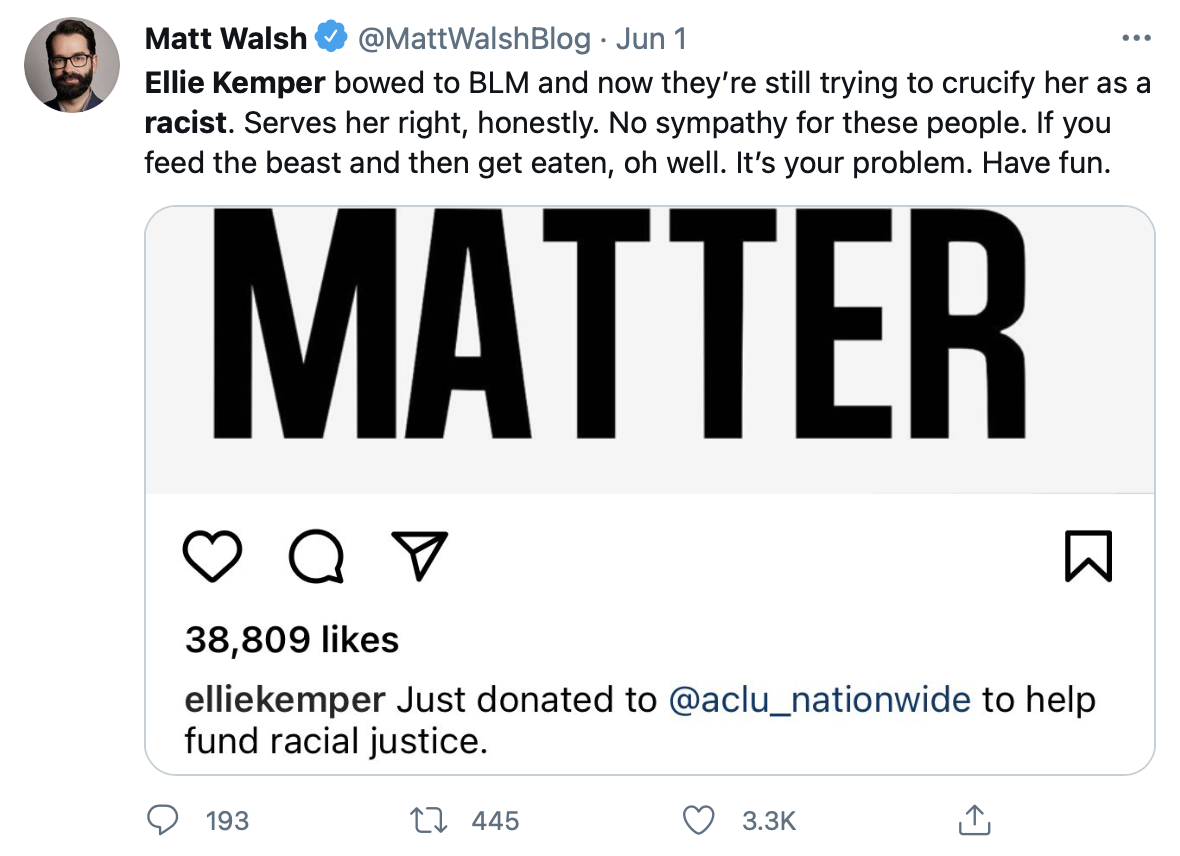 Walsh’s assertion that Kemper ‘bowed’ to BLM refers to Kemper’s past donation to the Black Lives Matter organisation.

In fact, Kemper publicly announced that she had donated to the organisation on the 31st of May last year, almost exactly one year to the date before the photo of her being crowned Veiled Prophet queen began to trend on social media. 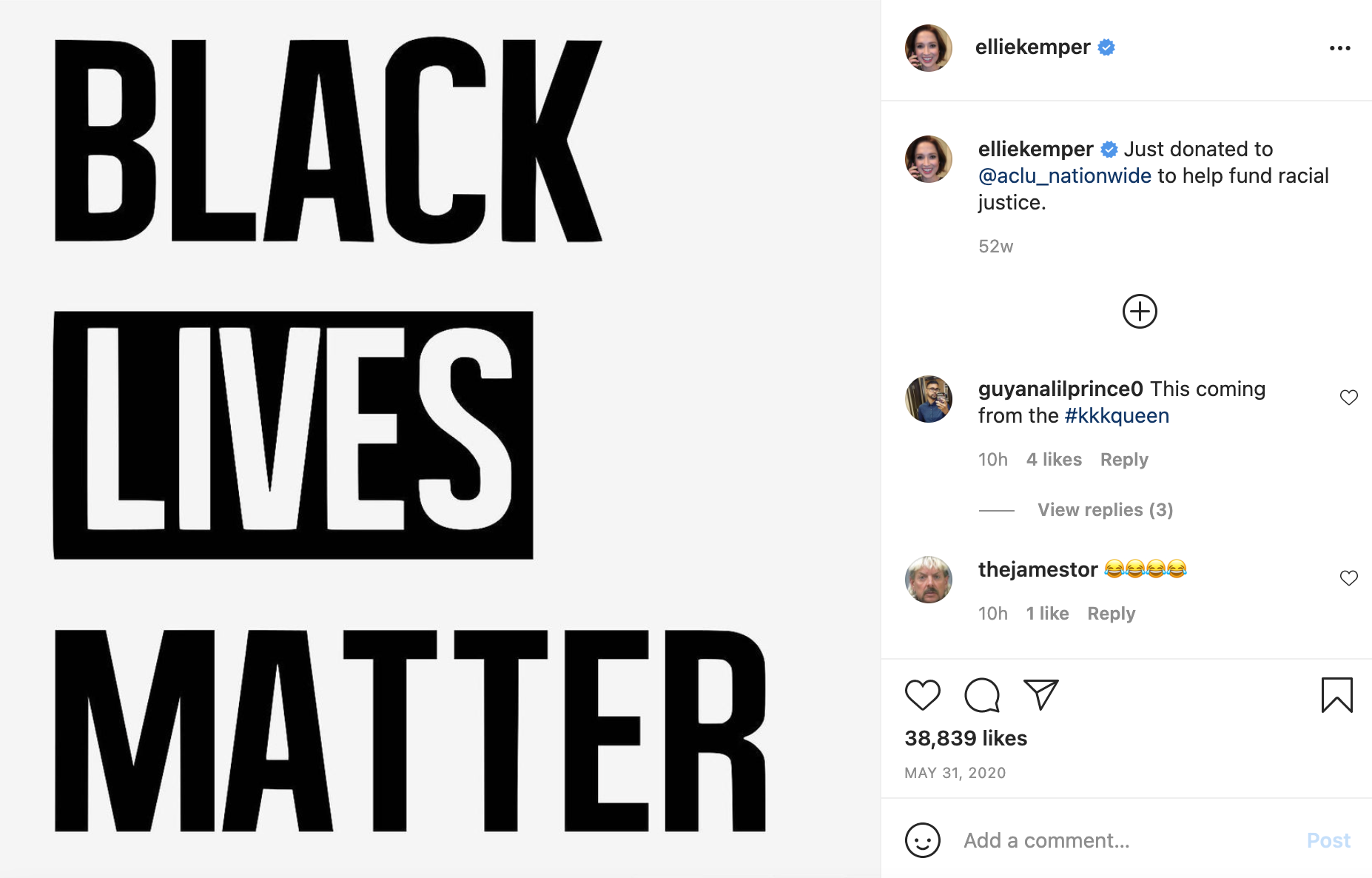 On top of this, Kemper has openly voiced her support for President Joe Biden and Vice President Kamala Harris, writing in another Instagram post published shortly after last year’s election, “Congratulations @joebiden and @kamalaharris! As a mom, I feel relieved today.” 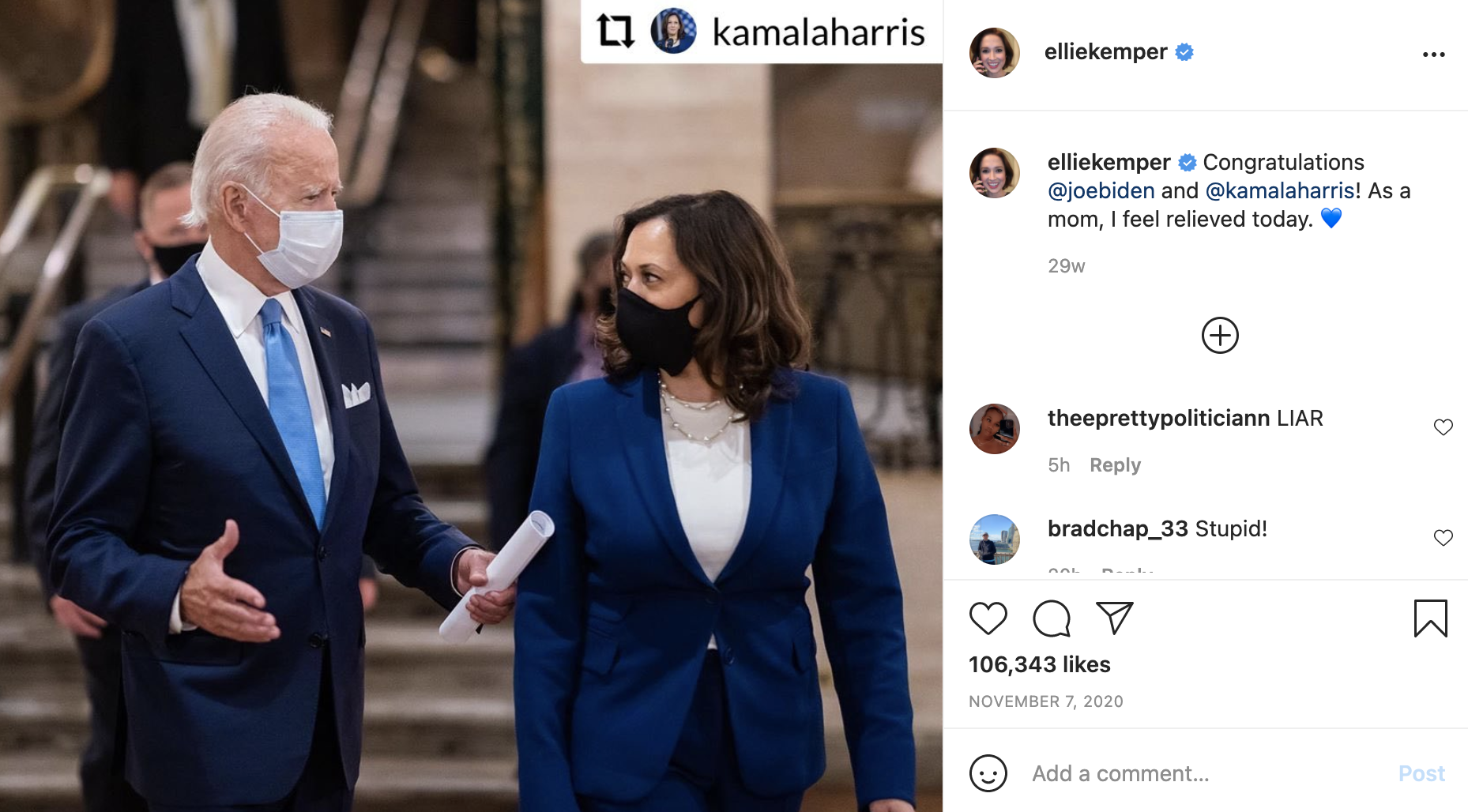 Taking a quick look at Kemper’s Instagram profile, you’ll notice that the comments under her posts haven’t been too kind in light of recent events, a phenomena which actually prove the point Matt Walsh was making when he stated that “If you feed the beast and then get eaten, oh well. It’s your problem.”

Taking a more supportiver stance, The Daily Wire’s Ben Shapiro argued that there wasnn’t enough evidence out there to condemn Kemper over her appearance in the recently resurfaced picture.

“There is not a single iota of evidence that Ellie Kemper is racist,” Shapiro wrote. “So naturally, Twitter is trending her and blue checks are calling her a ‘KKK princess.’ What absolute garbage.”

As a bonus, and only because it was the top comment under Shapiro’s thread, woke Hollywood actor-comedian Tom Arnold (True Lies, The Stupids) joined the discourse around Kemper with a very hot take on Ben Shapiro defense of the actress.

According to the The Stupids actor-comedian, not only is Kemper a racist, but so is Shapiro himself.

Interestingly enough, Shapiro isn’t wrong, as in reality, there is little to no evidence out there that proves she is, or has ever been, racist.

If anything, the actress’ more recent actions, such as her aforementioned supporting of the Black Lives Matters organisation and the Democratic Party, actually point to her being a left-leaning celebrity.

Having said that, Kemper has yet to address the photo. However, the cancel culture mob doesn’t really care about facts, so it’s likely that even if she does address it, they will not forgive Kemper for the Veiled Prophet photo any time soon. 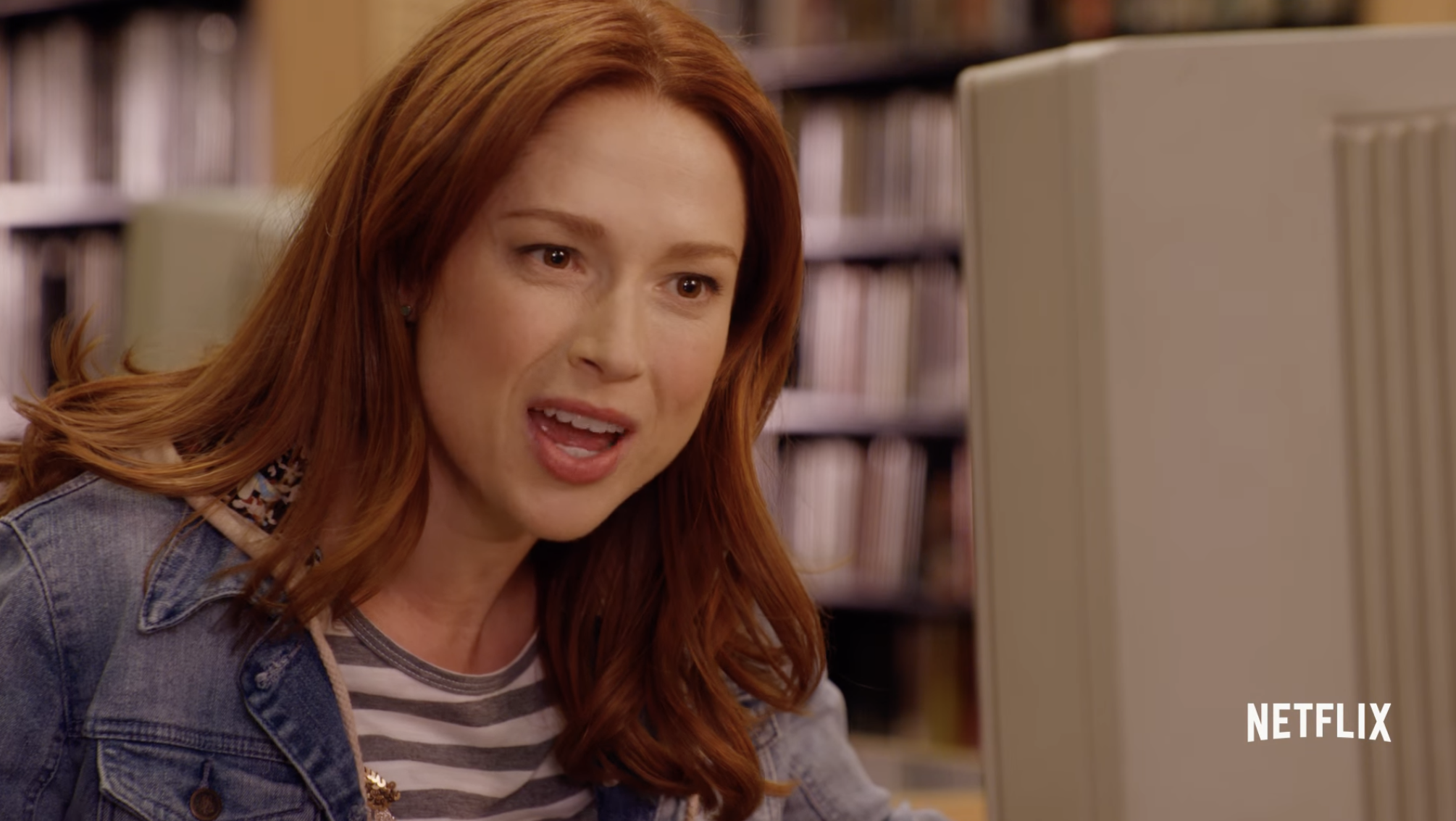 What do you make of Ellie Kemper being targeted by the left-wing cancel mob over her being crowned Veiled Prophet Queen of Love and Beauty over 20 years ago? Let us know in the comments section down below or on social media.