He stated, “This will be yet another epic portrayal of J.R.R. Tolkien’s world that has never been told before. We’re honored to partner with much of the incredible talent behind both film trilogies, along with new creative luminaries to tell this story.”

The project is being described as an “anime pic” and is being directed by Japanese director Kenji Kamiyama.

Kamiyama is known for his work directing the 2019 Ultraman series as well as Cyborg 009: Call of Justice, and Ghost in the Shel SAC_2045.

While Kamiyama will be directing, the project will be written by Jeffrey Addiss and Will Matthews.

Addiss and Matthews’ main writing credits are The Dark Crystal: Age of Resistance and the 2020 film Life in a Year.

According to Deadline’s Anthony D’Alessandro the project follows “the mighty King of Rohan, Helm Hammerhand, and a legendary battle which helped shaped Middle-earth heading into LOTR.”

D’Alessandro adds that the project will tell “the untold story behind the fortress of Helm’s Deep, delving into the life and bloodsoaked times of Hammerhand.”

It will be set 250 years before The Fellowship of the Ring.

While Register claims they are partnering with the creative talent behind the original Lord of the Rings and the Hobbit trilogies, D’Alessandro reports, “I’m told that the Oscar-winning feature architects Peter Jackson and Fran Walsh are not involved with the project as we speak, but that will be determined down the road.”

In the appendices of The Lord of The Rings, Tolkien provided a short story about Helm Hammerhand.

The first mention records his death when the Rohirrim were assailed from both the east and the west and they had to flee into the White Mountains.

It reads, “In that year (2758) the Long Winter began with cold and great snows out of the North and the East which lasted for almost five months. Helm of Rohan and both his sons perished in that war; and there was misery and death in Eriador and in Rohan.”

A second mention goes into much greater detail and provides quite of bit of information that should be adapted into the “anime pic.”

Tolkien wrote, “‘Of the Kings of the Mark between Eorl and Théoden most is said of Helm Hammerhand. He was a grim man of great strength.”

He goes on to detail a dispute between Helm and a one of his lords named Freca. The dispute erupts over Freca demanding Helm marry his daughter to Freca’s son, Wulf, during a council meeting.

Following the council meeting, Helm confronts Freca and hits him with one punch so hard that he ends up felling him. He then declares Freca and his men enemies of Rohan.

A couple of years after this confrontation with Helm, in the year 2758, the year Helm dies in a war, Rohan is besieged by three fleets of Corsairs up and down its coasts.

Not only is Rohan attacked by the Corsairs, but the Dunlendings led by Freca’s son Wulf invade from the East. And he wasn’t just leading the Dunlendings but “enemies of Gondor that landed in the mouths of Lefnui and Isen” as well.

Helm and his Rohirrim were defeated by Wulf’s forces and were forced to flee and seek refuge “in the Hornburg and the ravine behind (which was after known as Helm’s Deep).”

Helm’s Deep would be besieged while Wulf led his forces against Helm’s son Haleth at Edoras. Haleth would fall defending the doors of the Meduseld.

Following Haleth’s defeat, the Long Winter set in with snow covering Rohan for five months between November 2578 and March 2579. Despair and hunger began to set in and Helm’s younger son Hama led a sortie against his father’s wishes to find food. He would be lost to the snow.

Tolkien then details that Helm “grew fierce and gaunt for famine and grief; and the dread of him alone was worth many men in the defence of the Burg. He would go out by himself, clad in white, and stalk like a snow-troll into the camps of his enemies, and slay many men with his hands.”

He continues, “It was believed that if he bore no weapon no weapon would bite on him. The Dunlendings said that if he could find no food he ate men. That tale lasted long in Dunland.”

“Helm had a great horn, and soon it was marked that before he sallied forth he would blow a blast upon it that echoed in the Deep; and then so great a fear fell on his enemies that instead of gathering to take him or kill him they fled away down the Coomb,” Tolkien wrote.

As for Helm’s death, Tolkien provides a vivid image, “‘One night men heard the horn blowing, but Helm did not return. In the morning there came a sun-gleam, the first for long days, and they saw a white figure standing still on the Dike, alone, for none of the Dunlendings dared come near. There stood Helm, dead as a stone, but his knees were unbent. Yet men said that the horn was still heard at times in the Deep and the wraith of Helm would walk among the foes of Rohan and kill men with fear.”

While Helm might have died, the Rohirrim were not defeated. Helm’s nephew Fréaláf came down out of Dunharrow and launched a surprise attack on Wulf at Edoras and killed him.

The snows would eventually melt causing flooding that wiped out much of the invaders from the East. Not only that help would arrive from Gondor and the Dunlendings would be driven out from Rohan and even Isengard. Upon their defeat Fréaláf would become king. 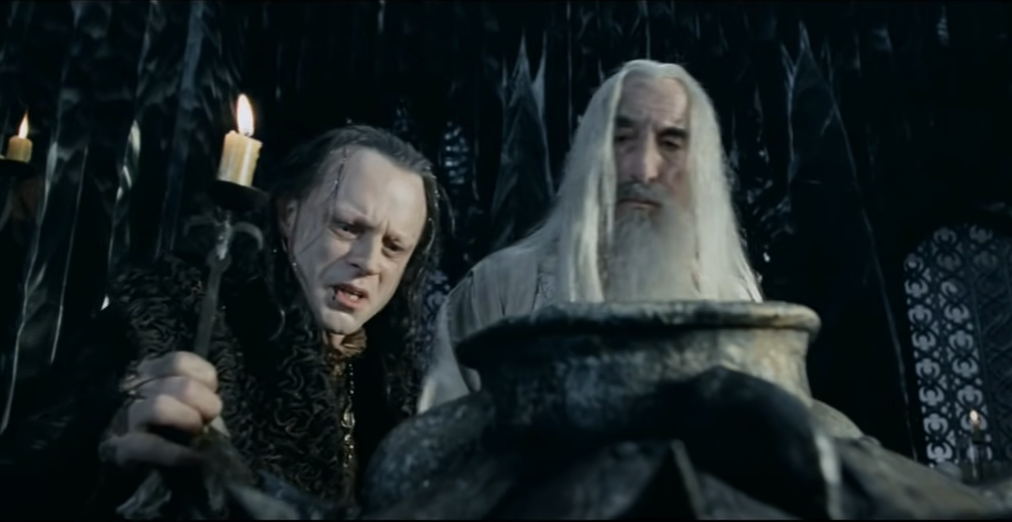 As for Helm, he “was brought  from the Hornburg and laid in the ninth mound. Ever after the white simbelmynë grew there most thickly, so that the mound seemed to be snow-clad. When Fréaláf died a new line of mounds was begun.”

The end of the tale sees the arrival of Saruman and his claiming of Isengard and the tower of Orthanc. A claiming that was encouraged by both Gondor and Rohan.

Are you interested in seeing Tolkien’s story of Helm Hammerhand adapted into an animated film?