He wrote, “To anyone thinking Indiana Jones 5 might be good, just let me point out… 1. Steven Spielberg is not directing. 2. Kathleen Kennedy is producing. 3. Harrison Ford is 78 years old. 4. It’s written by Jonathan Kasdan, who wrote SOLO.” 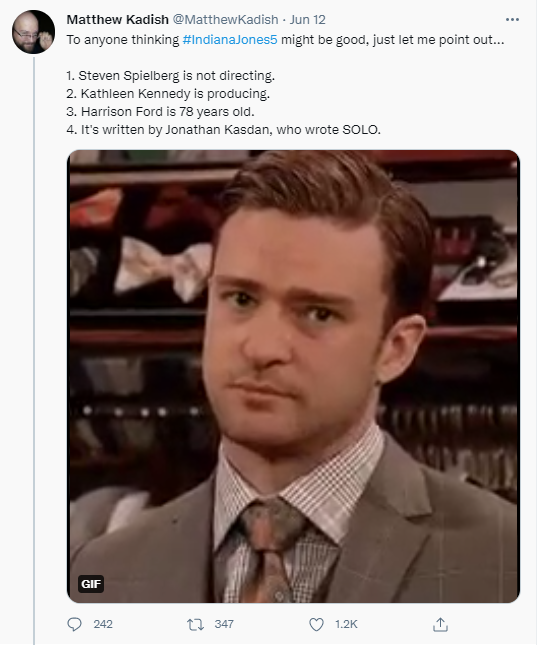 Mangold would directly respond by insulting Kadish. He wrote, “Thanks, Matt! 1) Keep making the world a better place crapping on things in the 1st week of production from your basement. 2) Never seen a script by Jon. Nothing against him. Just reality. Butterworths & I started from a blank page. 3) 1-3 r hugely talented & all at my side.” 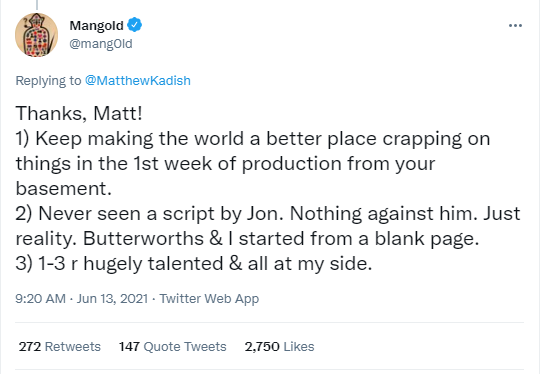 Mangold wouldn’t stop there though. He would continue to insult and deride Kadish and his podcast team, The Salty Nerd.

The Salty Nerd would tweet, “We don’t have basements. But we do have a kick ass studio with a Batman statue.” 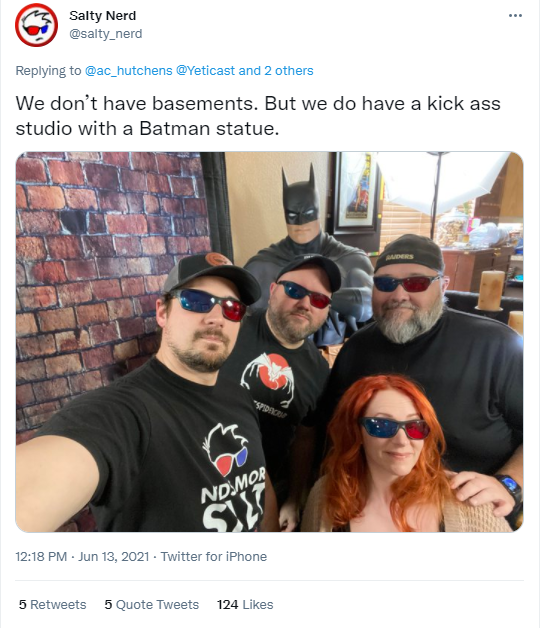 Mangold replied, “Yeah. That’s a kick ass studio. Congrats on the Batman statue. And the jar of corks. So how about you let me finish my film and then b**** all you want in front of your vinyl bricks lit by your fancy bounce light. And maybe don’t call opinion ‘news’..” 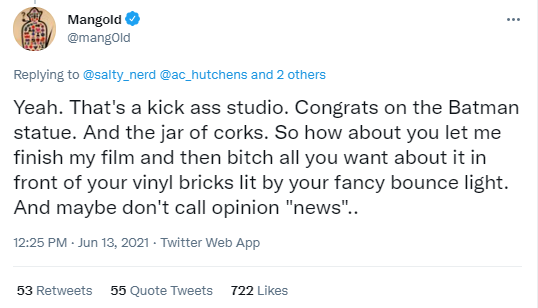 Before that Mangold described Kadish as a “click baiter” and “night crawler.”

He wrote in response to a Twitter user encouraging him, “Thanks, Ax. I don’t mind people griping & prognosticating. But, on my watch, false info, agism & snark from so-called ‘journalists’ is gonna be confronted directly & forcefully.” 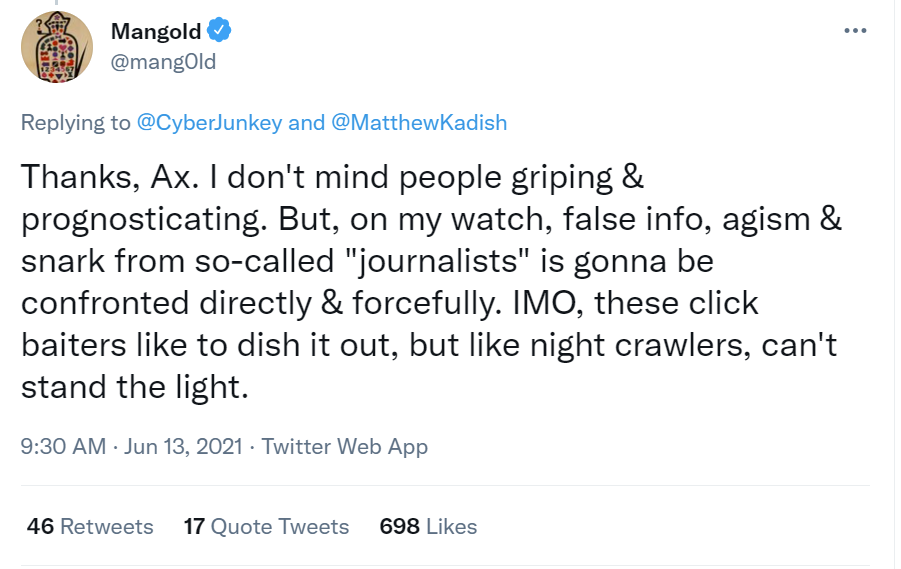 Mangold would then get in a back and forth with Kadish.

Kadish would respond to another user about his concerns about Ford’s age. He wrote, “Ford will always be Indy. The issue is whether he’s still believable as the character if he’s doing crazy action scenes and pushing 80 years old.” 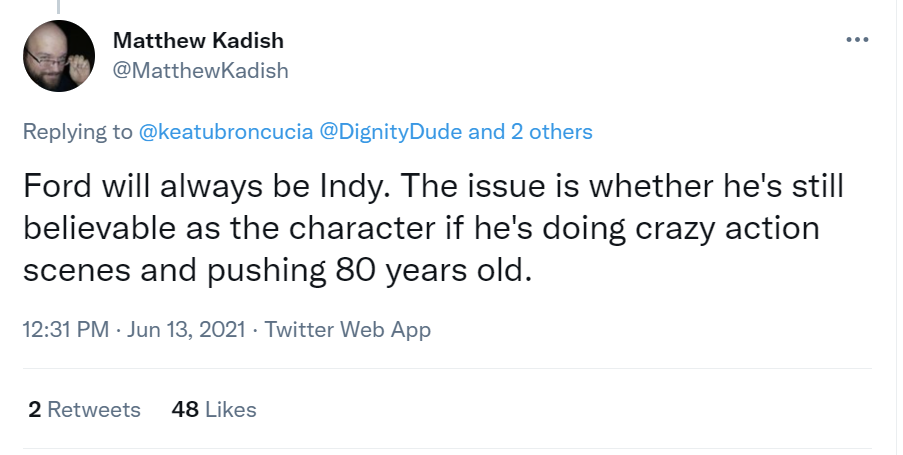 Mangold replied, “Have you read the script, Matt? Clearly not cause you don’t even know who wrote it. So why don’t you take a rest on my show till there’s a trailer or a title or something for you to be upset about. For all you know, I could be addressing all your worries.” 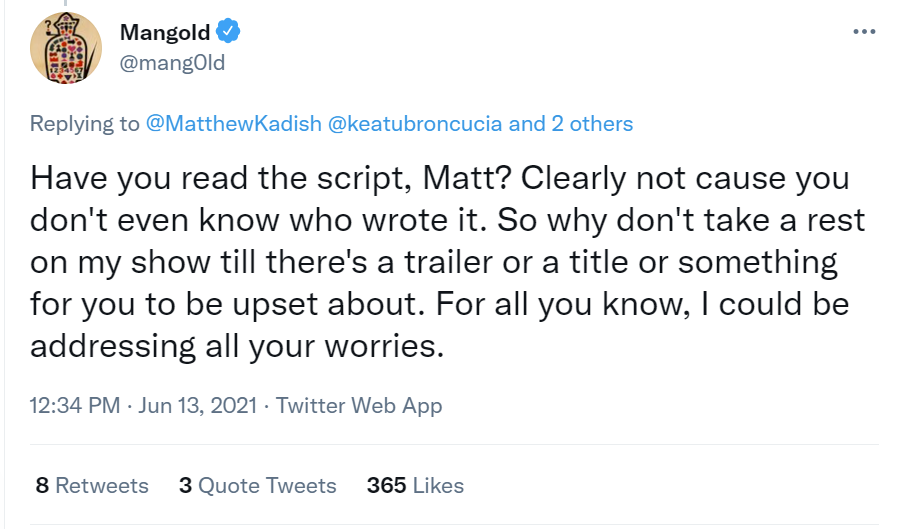 Kadish replied, “Sir, I would love it if you proved me wrong and made a great Indiana Jones movie. I’ve been an Indy fan since I was a kid and its one of my all-time favorite franchises. But it’s hard to get excited over what I’m seeing.” 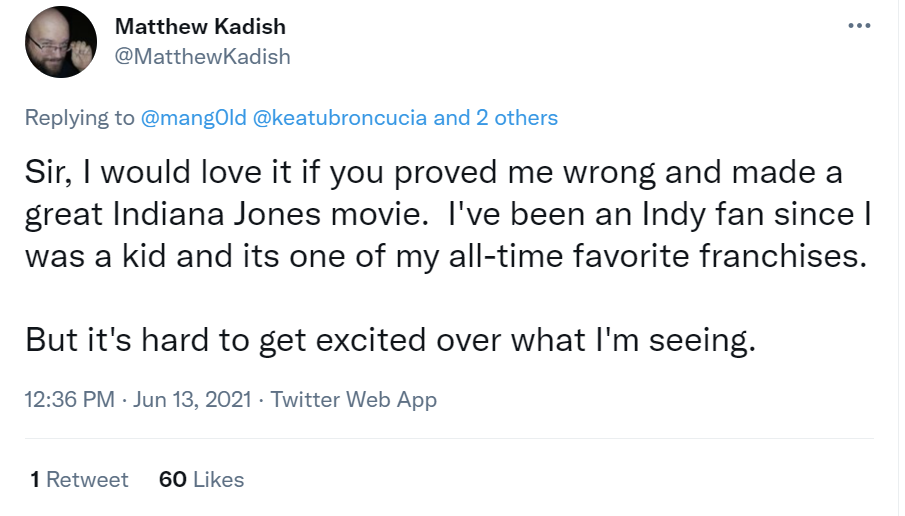 Mangold then stated, “I’m sorry you are finding it hard to get excited about the film I am making, Matt. Considering you don’t know the story, the script, the title, only some of the cast, nor have you seen images, if I were you, I would spend my time flipping hot takes about something that exists.” 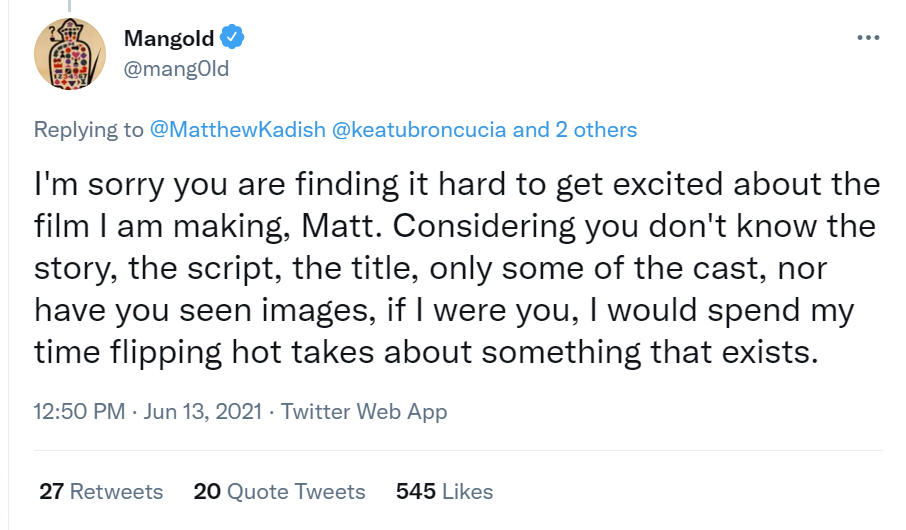 Kadish retorted, “If you would care to enlighten me about your story or anything else you’d be comfortable sharing, I’d love to hear it. But so far, everything I HAVE seen/heard is not encouraging. Please set me straight.” 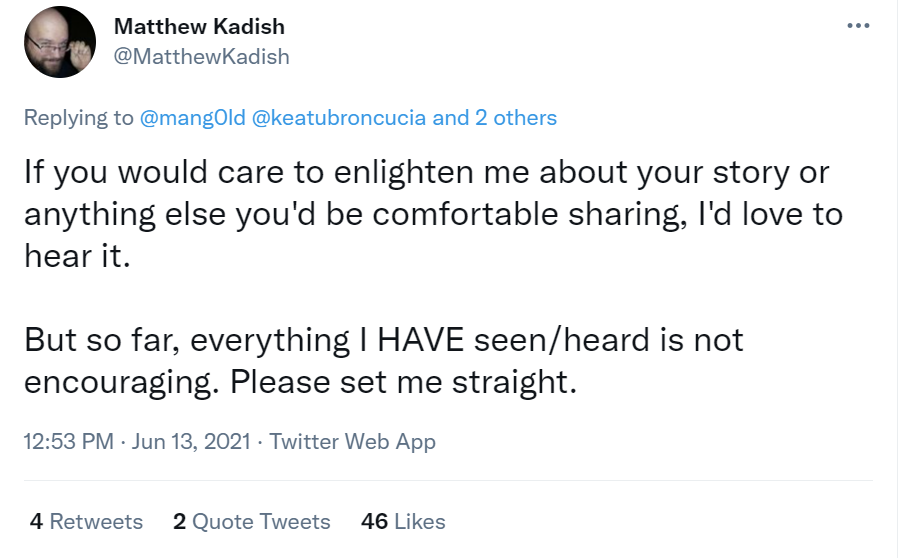 From there Kadish would assert to another user that he’s “free to share my opinions wherever the hell I want, about whatever I want.”

Mangold then chimed in stating, “Tell us about your Hollywood experiences, Matt. Gimme some titles of your work so we can be on equal footing.” 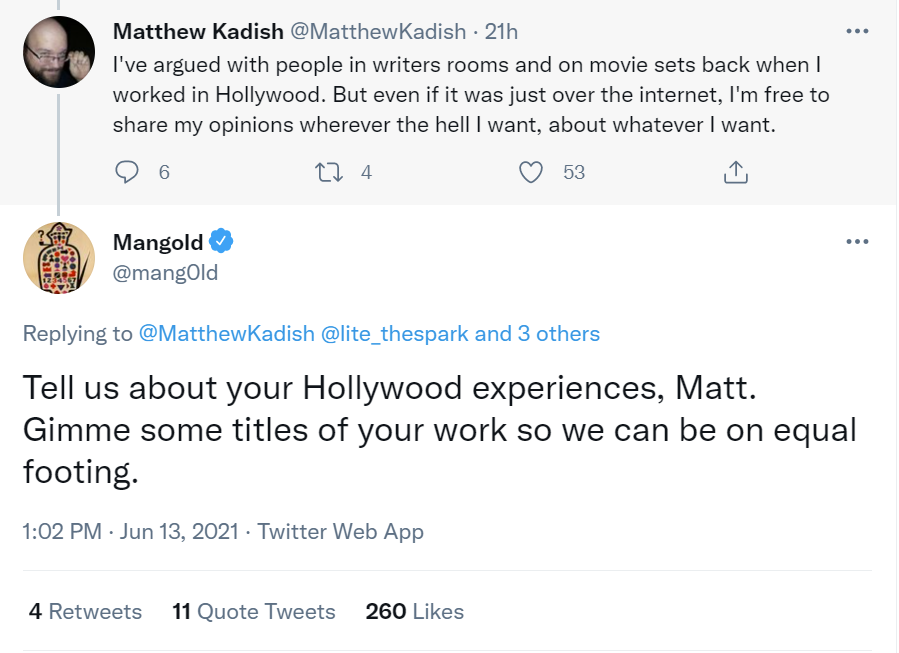 Kadish replied, “I’m not a successful as you, sir. I made a movie with Jeremy Renner back in 2004 and tried to get it into a feature, but it ultimately went nowhere. Worked w/a couple producers on unproduced screenplays. Quit Hollywood and became a novelist. Got lots of experience in town, tho.” 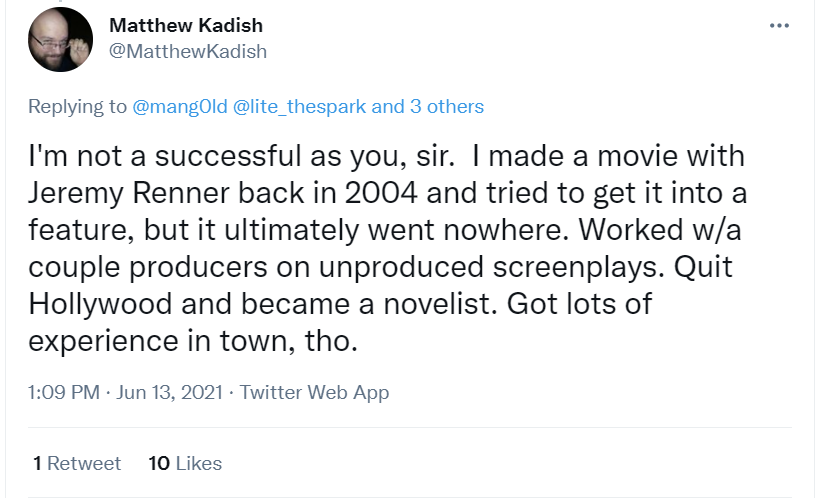 Mangold would then eventually get into a back and forth with YouTuber Odin’s Movie Blog where he attempted to explained why he decided to throw his temper tantrum while still throwing the temper tantrum.

But first he responded to Twitter user Dignity Dude who wrote, “Apparently Twitter users are now required to submit movie opinion permit applications to James Mangold in triplicate for his explicit approval.”

Mangold replied, “Naw. That’s not what I was saying! I was coming after a vendor selling clicks. Not fans. Sort it out, Dude.” 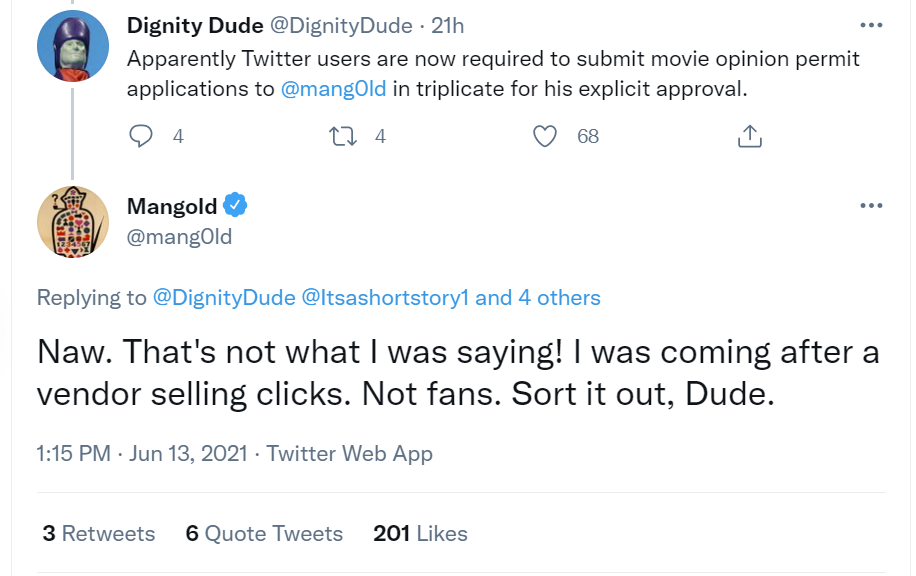 Odin’s Movie Review responded, “Lol he had no links or anything. Just laying out his thoughts. And then you so called professional decided to have a hissy fit. Sad and pathetic. God help you.”

Mangold replied, “Someone replied and included me if you care to know. The original tweet came from a site, not a fan. It had facts wrong and was nasty. I understand you think that I just shoulda let people like him spout this s***. Most days I do. Not today.” 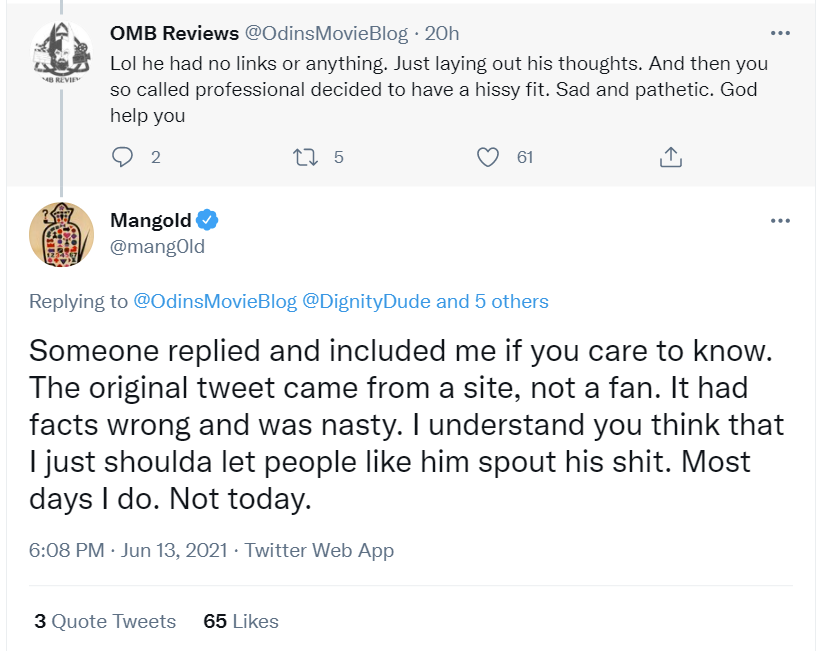 Dignity Dude then chimed in, “Matthew Kadish is not a fan?”

Mangold replied, “He has you tube channel and a website. He may well also be ‘a fan’ whatever the f*** that means. F***. I ‘m an Indy fan. He certainly is not my fan. Hardly seems a Harrison Ford fan. So what does that word mean exactly?” 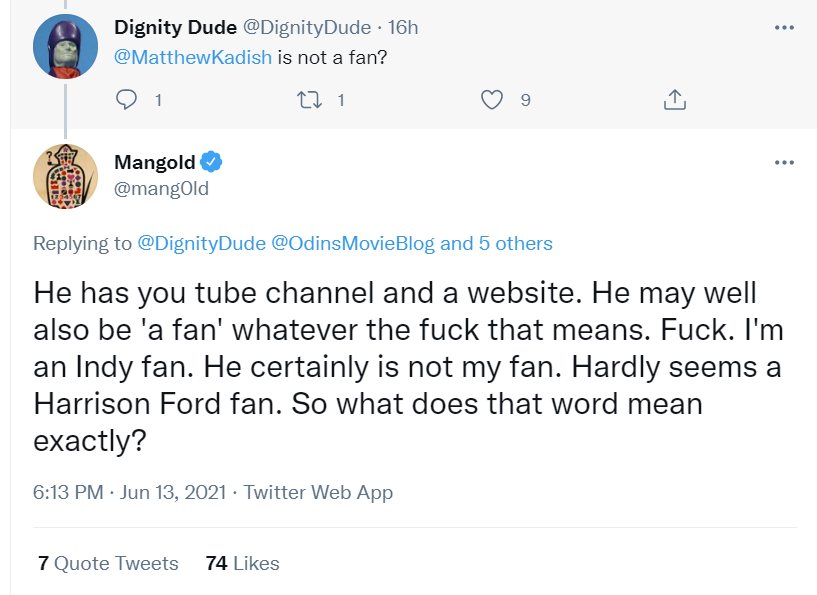 Kadish would respond to this writing, “I’m actually very fond of your movies, sir. I’m also a huge fan of Indiana Jones and Harrison Ford. I hope you can make a good movie. I did not tag you in any post, FYI.” 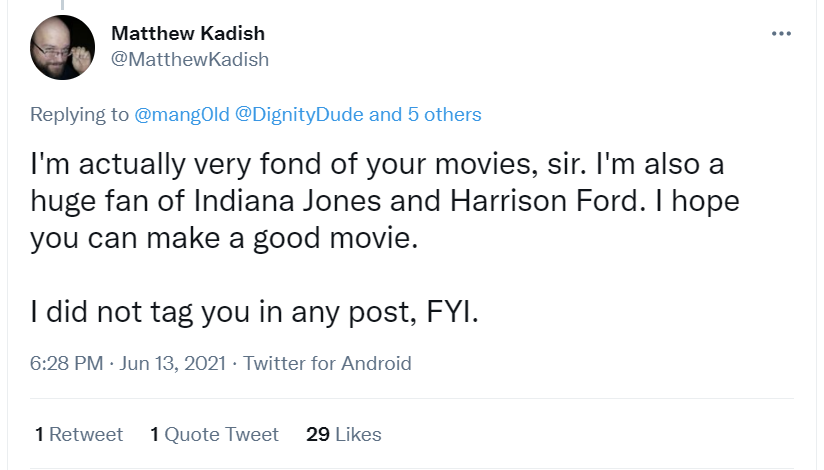 However, Mangold would continue to respond to the original thread. To a now deleted tweet he wrote, “See I thought fans liked things, I didn’t know it meant hating things. The other confusing aspect is that I haven’t made the movie yet. But.. ‘fans.'”

Odin’s Movie Blog responded, “Fans love things until you crap all over them.” 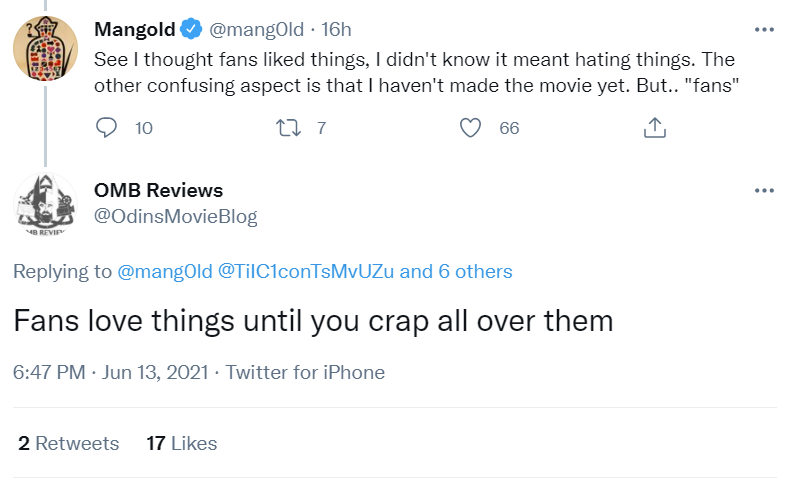 Mangold then replied, “And clearly you are positive I am going to ‘crap all over things’ although I’m not sure why.”

To which Odin’s Movie Blog pointed out, “You’re literally crapping on fans now in your comments.”

Mangold responded, “And whose fans are these fans am I ‘crapping on’? What kind of ‘fans’ are these? They’re clearly not Harrison Ford fans. Not my fans. Don’t seem much like Indy fans. Help me understand. Cause usually when I approach someone saying I’m a fan, I am not insulting them.” 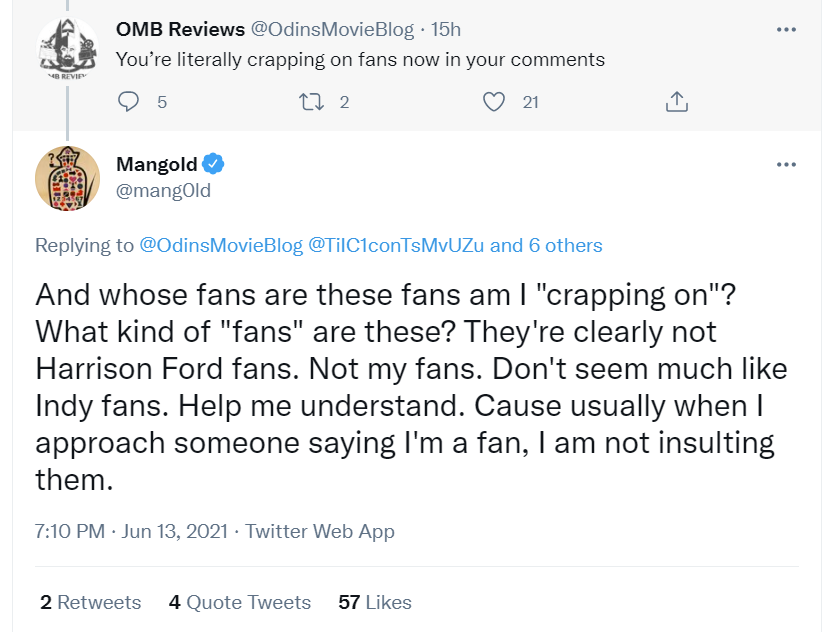 Mangold would eventually respond to Kadish in a more conciliatory tone. He wrote, “Someone replied u to my address. U should be able to vent, Matt. I thought you were a pro blogger. To me there’s a difference between fans &people with ‘shows’. Next time I will try to hear you out and just correct the facts.” 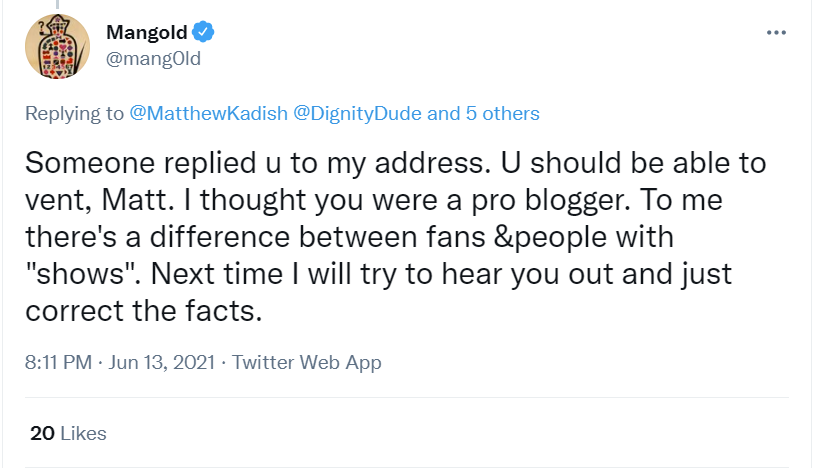 Mangold would try and shift his tone while interacting with a number of other Twitter users.

To one user he wrote, “I understand wariness, I live it. I don’t know if I’ll make you happy. But my team & I will knock ourselves out trying to make something good. We admire the craft of the originals. I hope when you see real images, they’ll look better to you than paparazzi shots from bushes.” 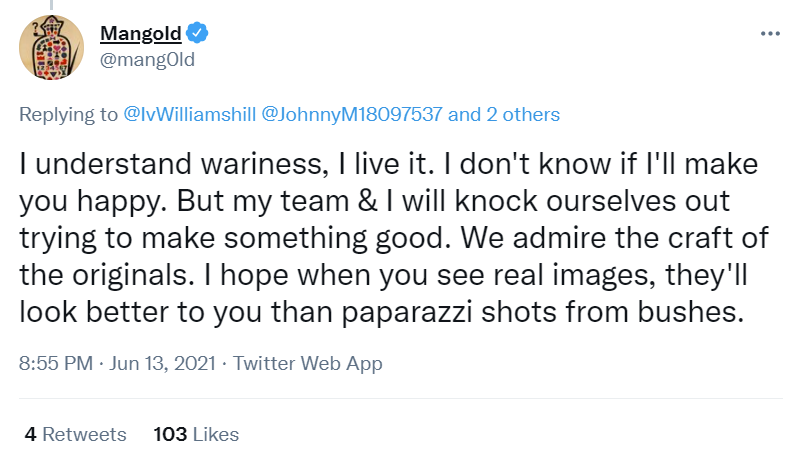 And then to another he simply wrote, “Thanks Jorge!” 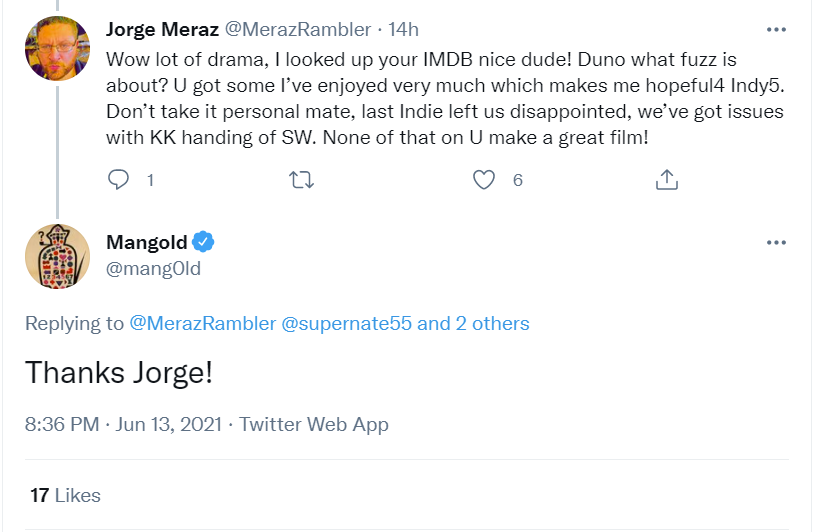 And then to another he responded, “I understand that point. Just trying to do a good job. Later!” 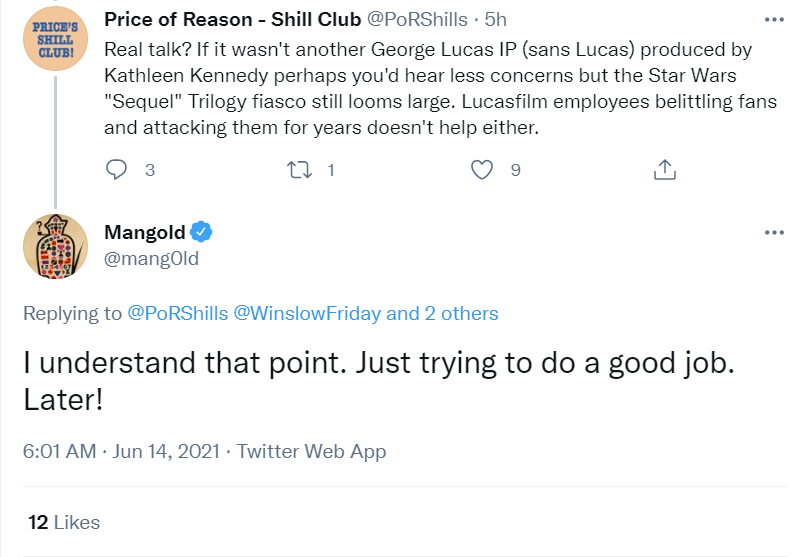 However, Mangold was still taking pot shots at Kadishs’ original tweet as well.

To one user he responded, “Funny. Usually when I list reasons for ‘not having I high hopes’ I don’t start with — ‘To anyone thinking Indiana Jones 5 might be good, just let me point out…'” 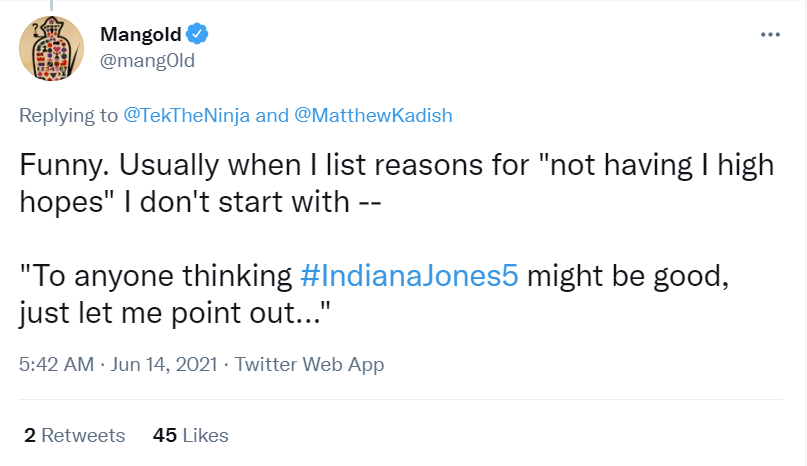 What is interesting about Mangold’s comments is that they are in direct contradiction to the professed values of Disney and Lucafilm by the company’s CEO Bob Chapek.

If you remember, Chapek was asked about the firing of Gina Carano back in March during the company’s 2021 Annual Meeting of Shareholders.

He responded to the question stating, “I don’t really see Disney as characterizing itself as left leaning or right leaning. Yet, instead standing for values. Values that are universal. Values of respect. Values of decency. Values of integrity. And values of inclusion.”

James Mangold clearly did not embody those values. He disrespected Matthew Kadish, showed no decency, and was clearly not inclusive as he began insulting people left and right over their opinions.

One has to wonder why James Mangold has not been fired for this behavior given Disney claimed to have fired Gina Carano for “her social media posts denigrating people based on their cultural and religious identities.”

She did not denigrate anyone, but Mangold definitely did denigrate people. 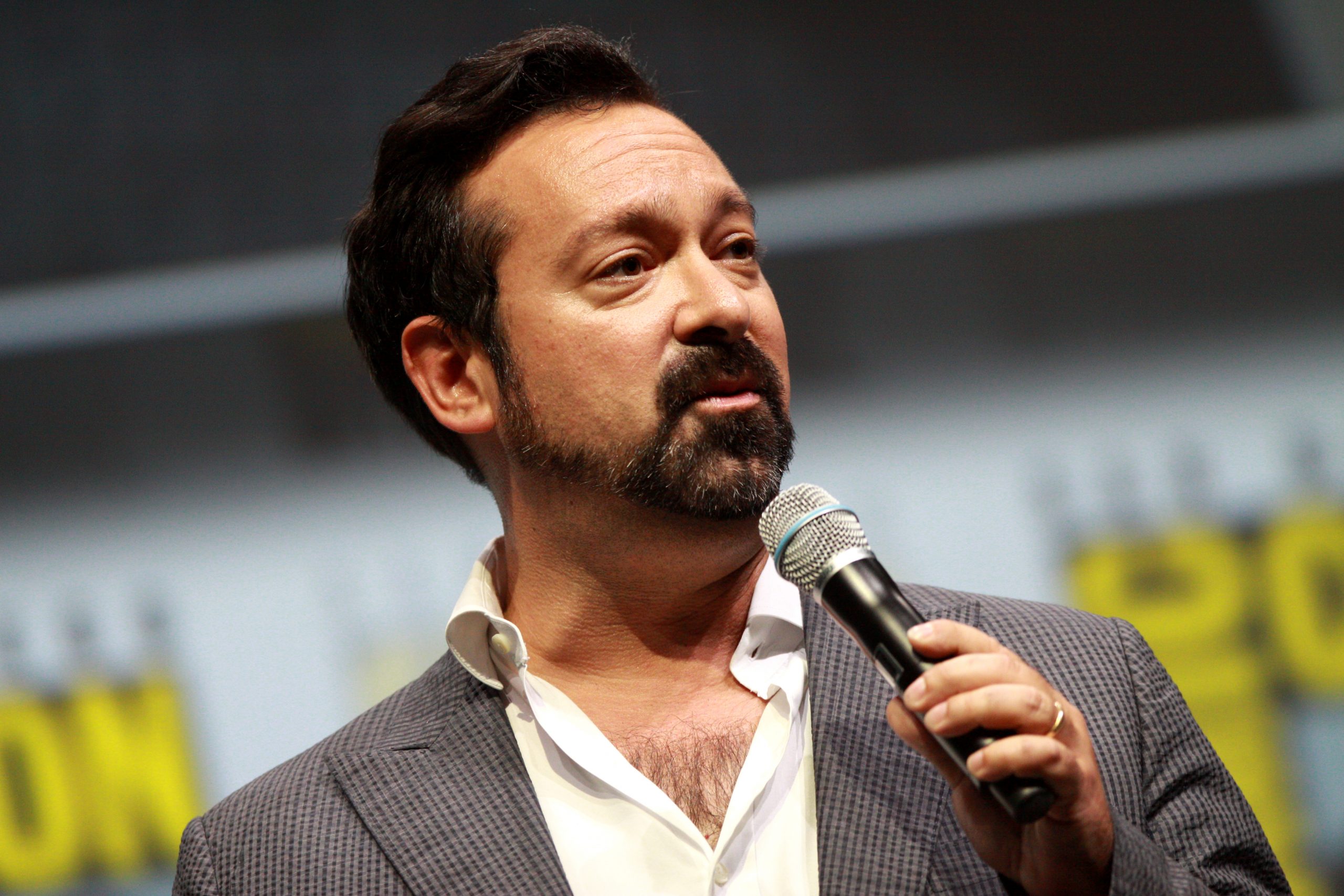 What do you make of Mangold’s temper tantrum?