Star Trek actor Anson Mount recently responded to Guardians of the Galaxy and The Suicide Squad director James Gunn telling him he has no talent and that he should delete his Twitter account.

It all started when Gunn took to Twitter to express his concerns about male actors exaggerating how tall they are on their resumes.

Gunn tweeted, “I wish actors (especially men) would tell the truth about their height when casting. Casting a whole show can be a balance of a lot of things, including heights, & easily 50% of the time male actors exaggerate how tall they are, sometimes by a lot, on their resumes.” 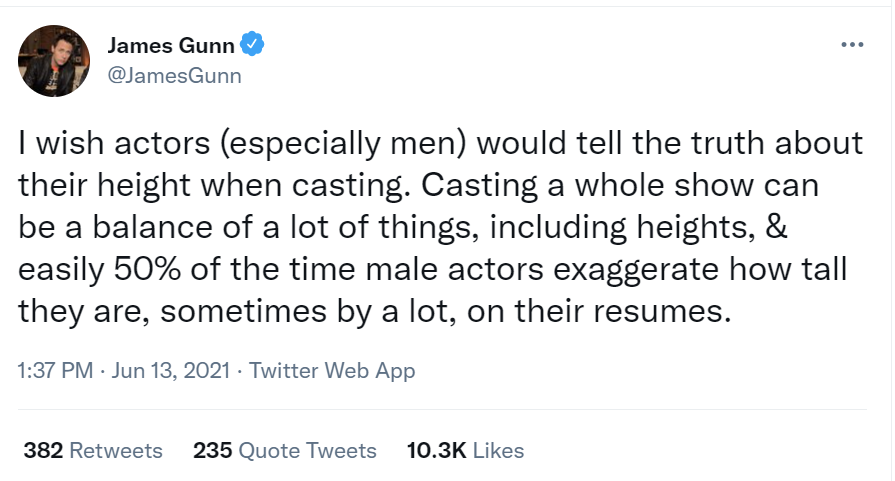 Following this tweet, Gunn would then respond to a fan who seemingly believed that Chris Pratt is short.

Gunn tweeted, “Chris is only a problem in that he’s HUGE. Most other actors appear to be mini-humans around him. If someone would shave him down to a normal human size casting would be easier for me. (This is not a request for some weirdo to go shave Chris shorter.)” 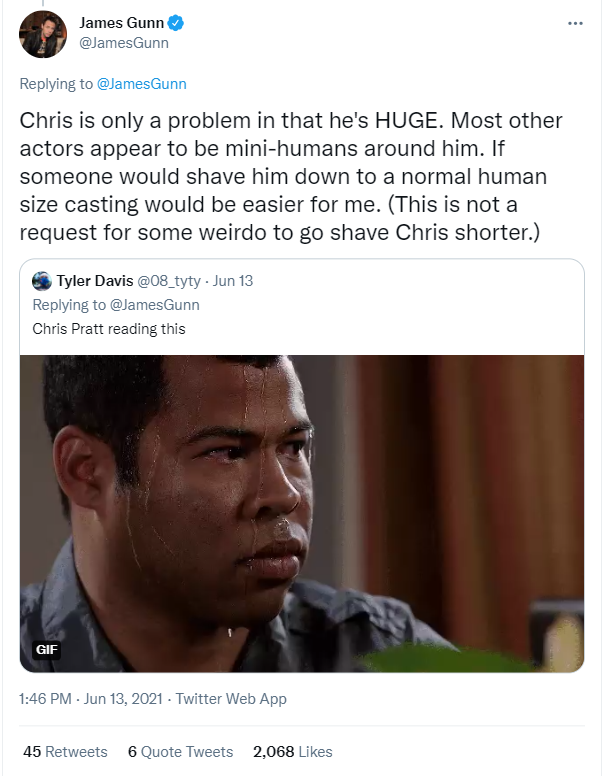 From there Gunn provided details on a dinner with Djimon Hounsou, Chris Pratt, and Dave Bautista.

He relayed, “I remember going out to eat to dinner for the first time with Djimon Hounsou, Chris Pratt, & Dave Bautista. Djimon is a big guy, well over 6 feet & incredibly fit, & as he sat in his car he saw these two giants hulking out of the house, like a couple of kaijus stalking us.” 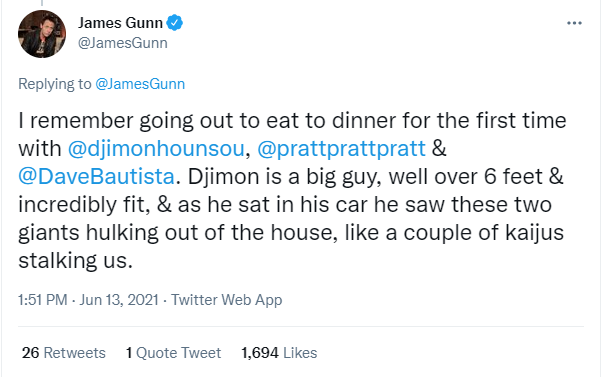 Gunn continued the story, “Earlier Djimon had auditioned for Drax & I told him he wasn’t big enough. He turned to me and told me he had thought I was lying. “Nope,” I said. Next day Lee Pace showed up on set, who is 6’5″. I do not purposely hire behemoths, it just works out that way.” 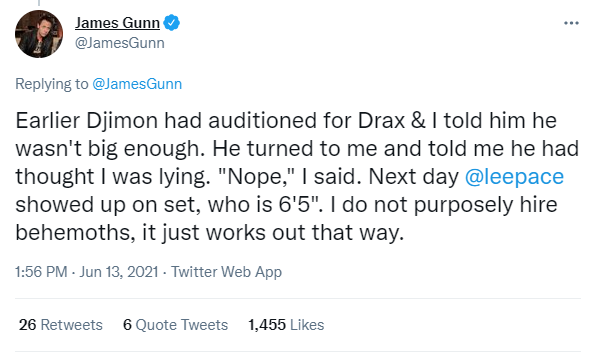 Not only would Gunn detail this story, but he would also further elaborate on his original tweet.

In response to one user claiming that men lie so their resume isn’t thrown out, Gunn tweeted, “Absolute nonsense. Men lying about their height in resumes costs them as many jobs as it gets them through deceit. You’re often looking for someone smaller to balance out the cast, to make a star look taller, or to fit well with another comparable actor.” 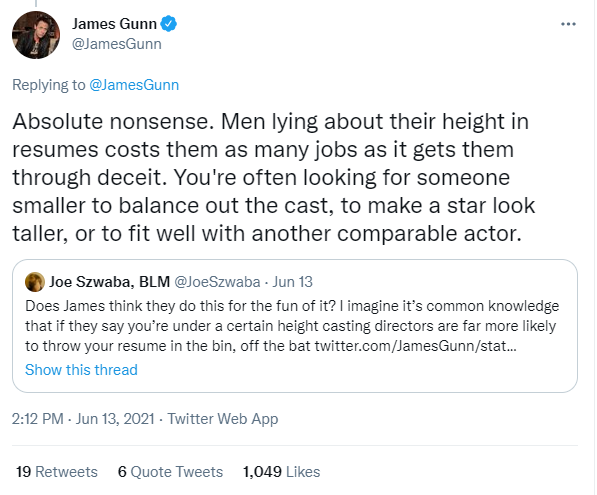 To another who claimed they were lying to in order to feed themselves, he wrote, “They don’t lie to get the job. They lie because of their egos. Sometimes it gets them the job; sometimes it costs them the job.” 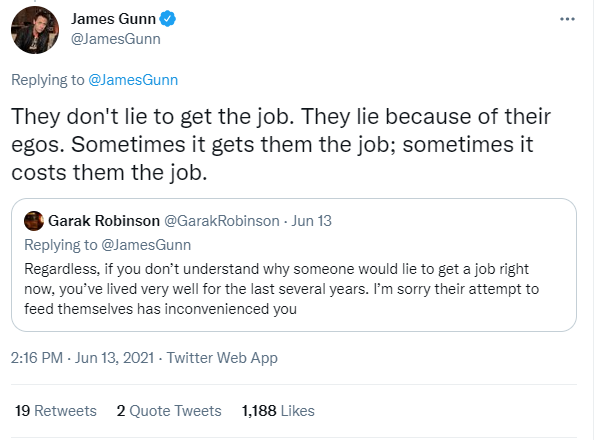 Gunn would then add, “Also, for the record, I’m against lying to get a job that you’re taking from someone else who is being honest in any case.”

When asked to name names of actors doing this, Gunn responded, “I don’t especially care if they lie to the public, which most A-list actors do, especially actors who aren’t tall. But lying during the casting process and on their resumes can affect what we’re filming, and that’s a different story.” 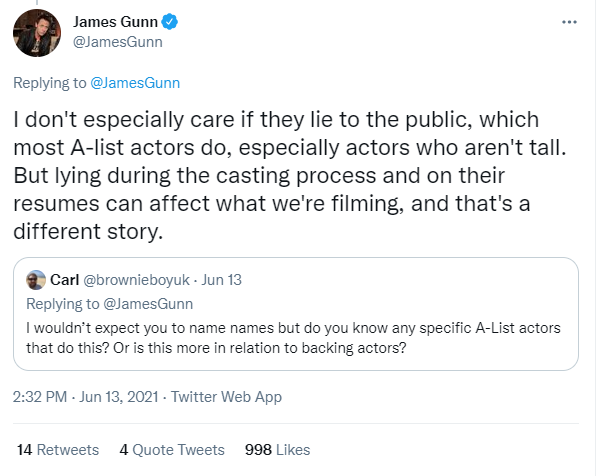 Mount would initially respond to Gunn’s tweet about lying to get a job.

He wrote, “Then stop telling people you have talent. And delete your account.” 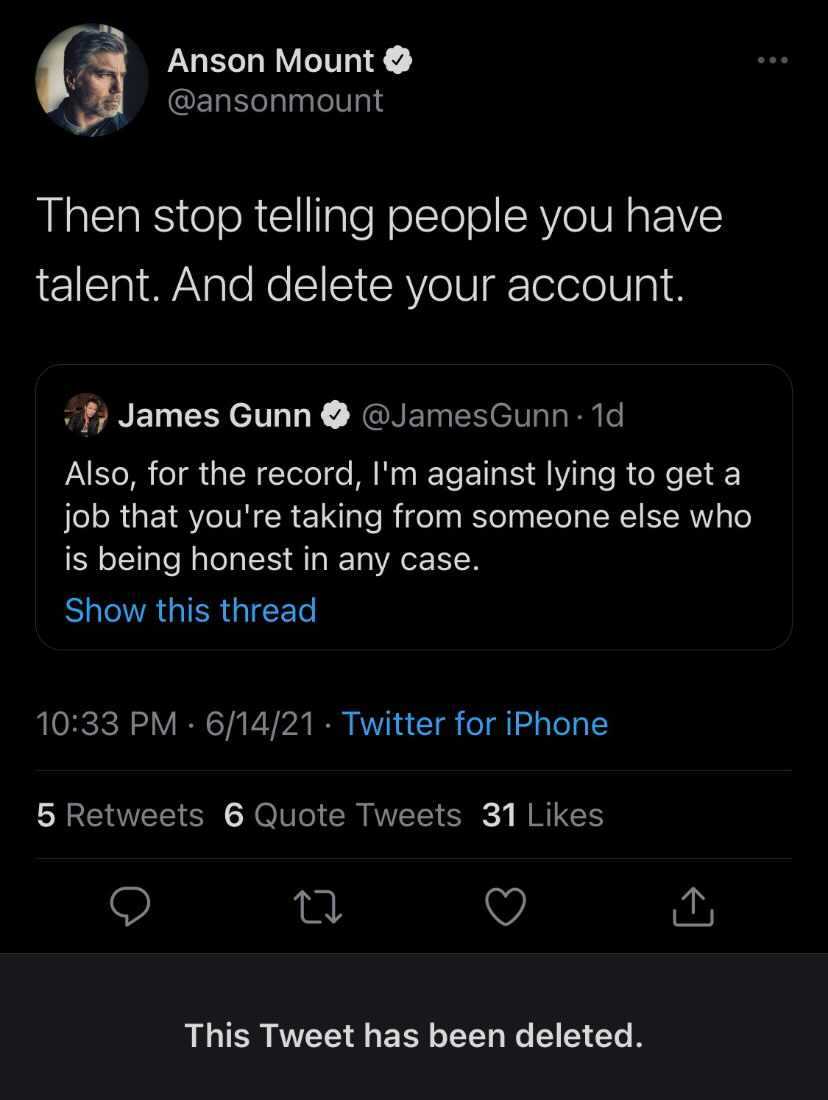 He would eventually delete the tweet, but he would take issues with Gunn’s original tweet about men exaggerating their height. In fact, he somehow made it into a discussion about sexism and masculinity.

He wrote in response to Gunn, “Well, James. It kinda shouldn’t f*****’ matter. Industry’s use of ‘height’ is shorthand for male dominance/’masculinity’ (particularly re: female counterparts).”

“Here’s a better idea: present US with your measurements when we walk through the door. We’ll likely be underwhelmed.” 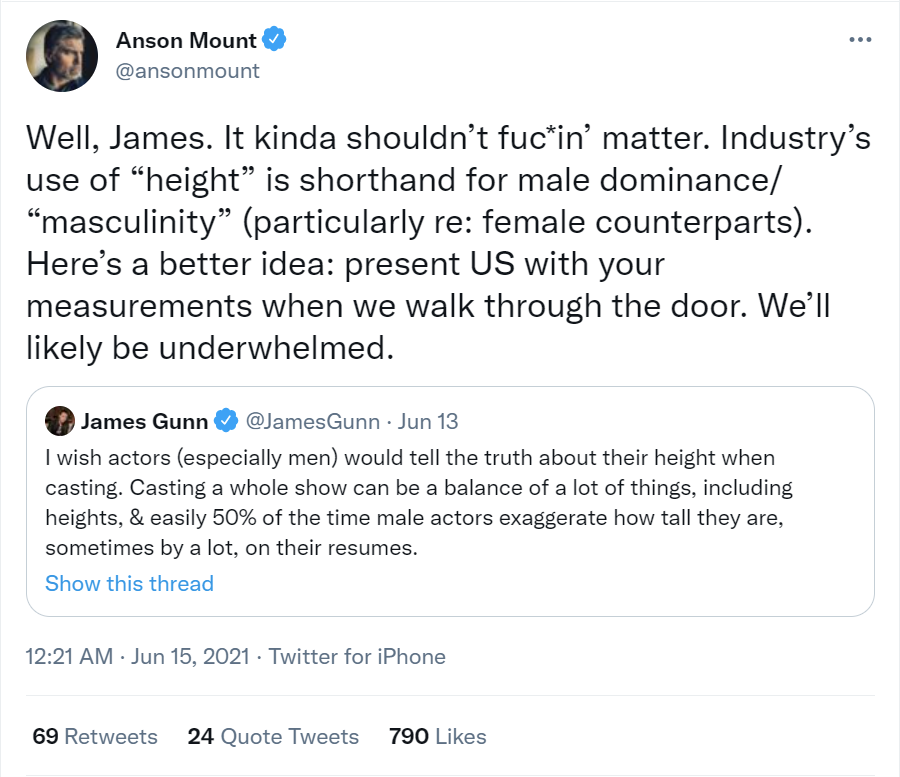 Gunn had also previously responded to another user asking his height. He tweeted, “6 feet. Which people are always surprised to see when they meet me in person because I surround myself with mammoths.” 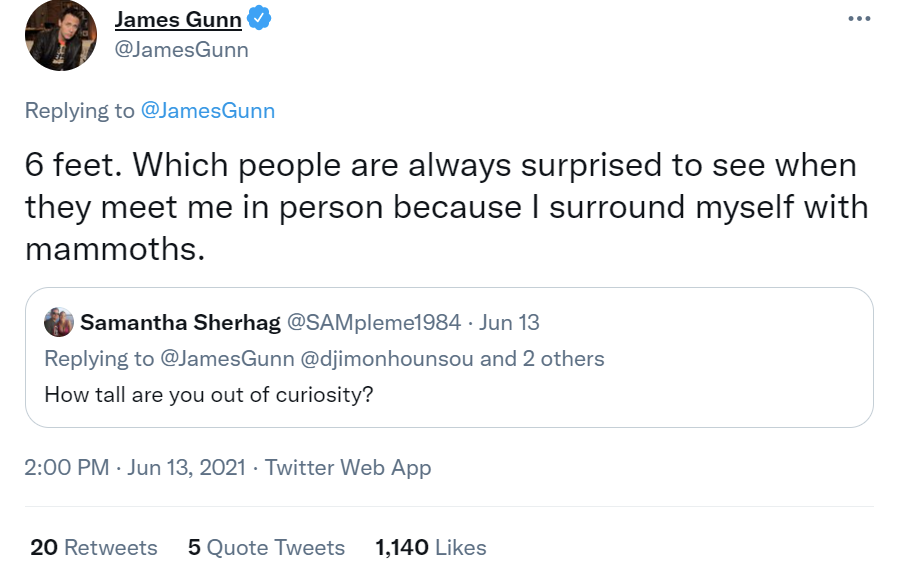 However, his height might not be the measurements Mount was referring to.

In response to another user, Mount would write, “The Cruise Missile wouldn’t touch a Gunn film to save his life.” 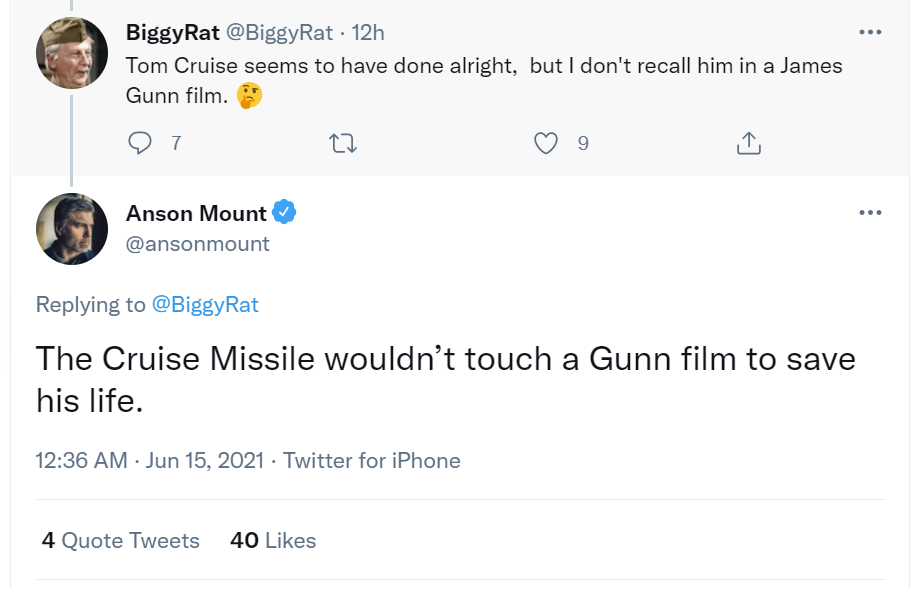 Gunn did respond to Mount’s tweet that attempted to shift the conversation to masculinity and sexism.

He wrote, “I don’t know why this hit such a nerve, Anson Mount, but, as a director, it does matter, because when you’re shooting two or more people the heights make a difference in how it’s shot. And sometimes you are looking for height disparity or parity. It’s about the storytelling.” 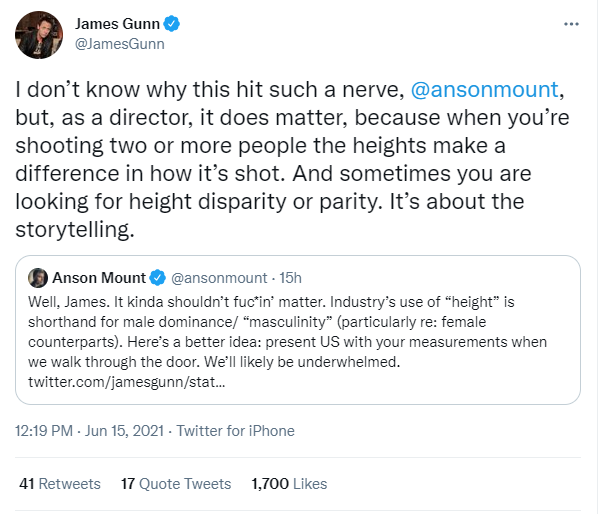