English actor and comedian Ricky Gervais recently called out social media users who get easily offended by the content other users post, in particular the cancel happy users of Twitter. 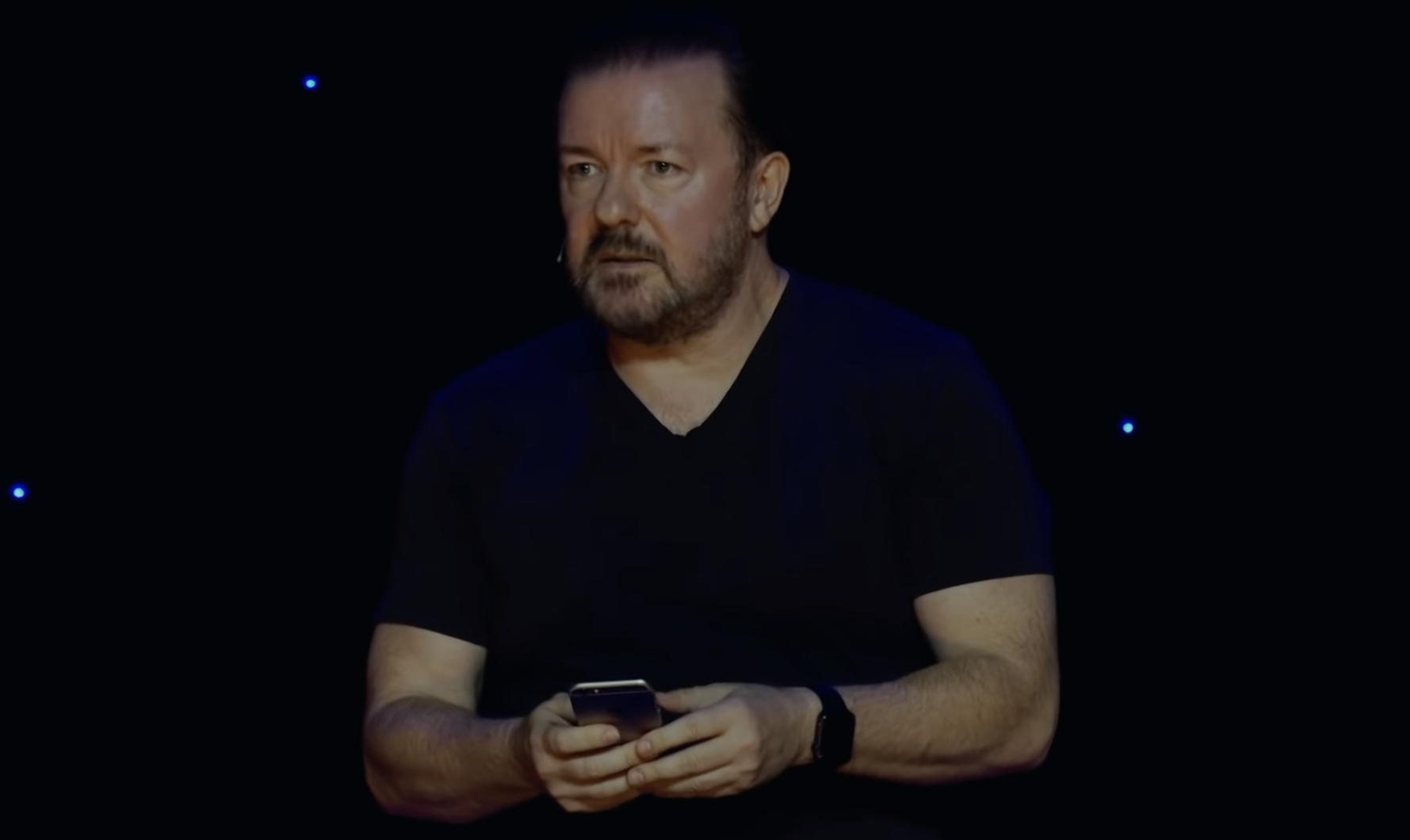 In a clip of himself performing stand-up shared by Gervais to his personal Twitter account on June 20th, 2021, the comedian asserts, “People take everything personal, and they think the world revolves around them; particularly on Twitter.”

Gervais then jokingly proceeds to draw an interesting comparison stating, “That’s like going into a town square, seeing a big noticeboard and there’s a notice [that reads]’guitar lessons’, and you go ‘But I don’t f***ing want guitar lessons!'”

The comedian then pretends to call the number on the guitar lessons advertisement, to really drive his point home, and asking, “Are you giving guitar lessons? I don’t f***ing want any!”

“Fine, it’s not for you then,” Gervais explains, before exclaiming, “Just walk away!” as the crowd erupts in laughter at the comedian’s sublimely delivered punchline.

Though the clip is from his past Ricky Gervais: Humanity stand-up comedy special, released on Netflix in March of 2018, Gervais’ critique on social media users, particularly Twitter, are still as relevant today as they were then.

This isn’t the first time that Gervais has called out the behaviour of social media users, particularly choosing to single out the Twitter mob that gets so easily offended.

“If you’re offended by something I tweet, just remember that I’m not Tweeting You, as such, I’m just Tweeting, and you’re choosing to read it” said the comedian back in 2018, echoing his Ricky Gervais: Humanity stand-up routine. “Hope this helps you not take things too personally. Merry Xmas.” 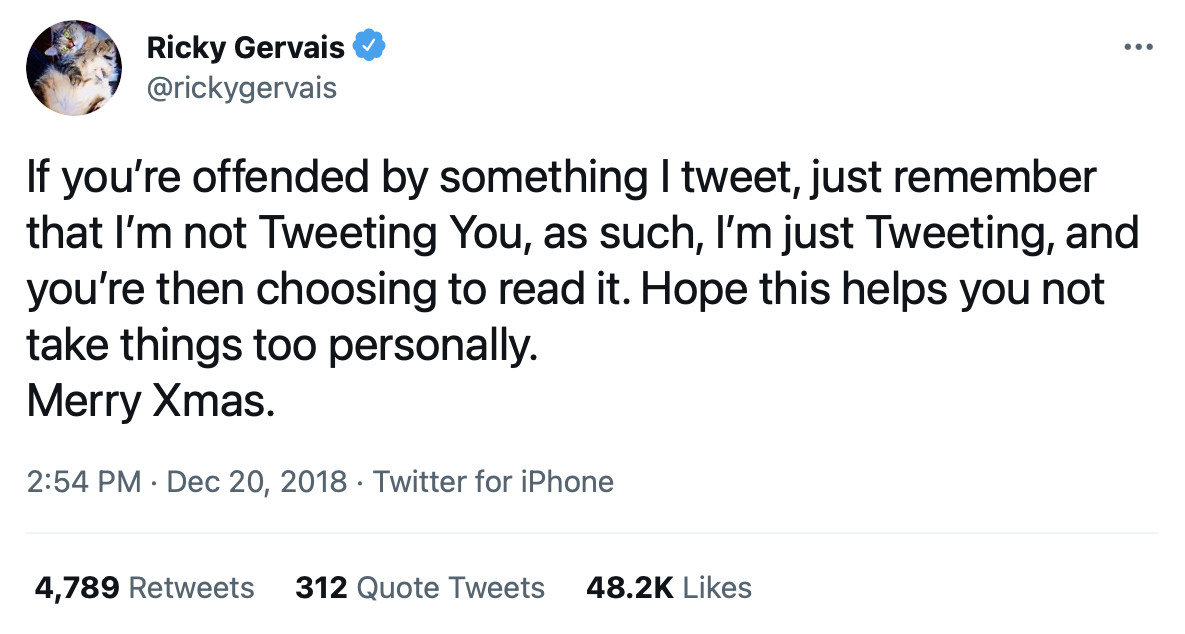 What’s fascinating here is the fact that Ricky Gervais labels himself as a liberal – Not only that, but he goes even as far as calling himself a “champagne socialist” when it comes to political views, which makes his critique ion woke culture even more delicious.

“I’m an old fashioned liberal lefty, champagne socialist type of guy,” wrote Gervais on Twitter in January 2019. “A pro-equality, opportunity-for-all, welfare state snowflake. “But, if I ever defend freedom of speech on here, I’m suddenly an alt right nazi. “How did that happen?”

We are all asking ourselves the same question, Ricky. 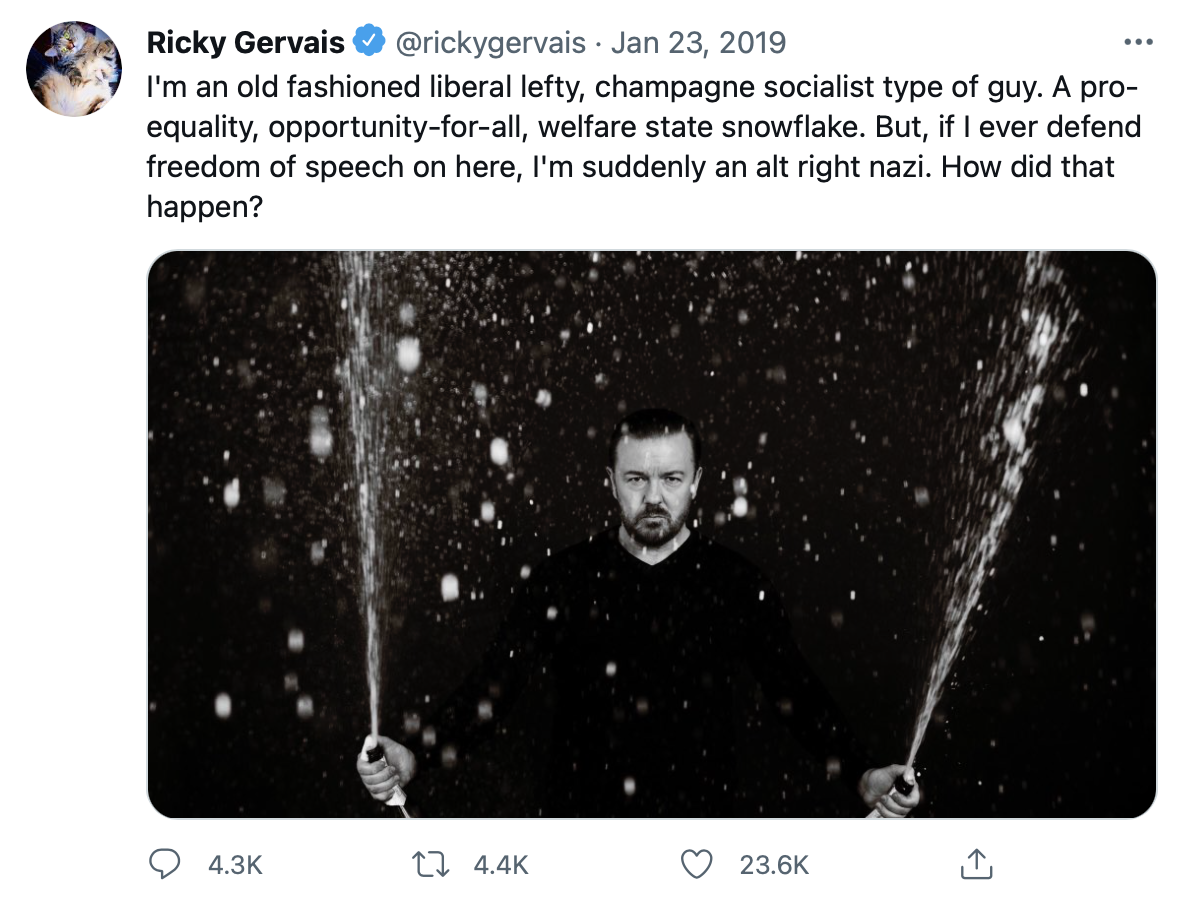 Later, in October of that same year, Ricky Gervais doubled down his stance on easily offended Twitter users, writing, “I don’t try to offend, but the more people are offended by a joke, particularly on twitter, the funnier I find it.”

“And the angrier the tweet, the more chance of me using it and turning it to laughs and cash,” he further explained, before taking a subtle jab at political correctness. “PC culture isn’t killing comedy. It’s driving it. As it always did.” 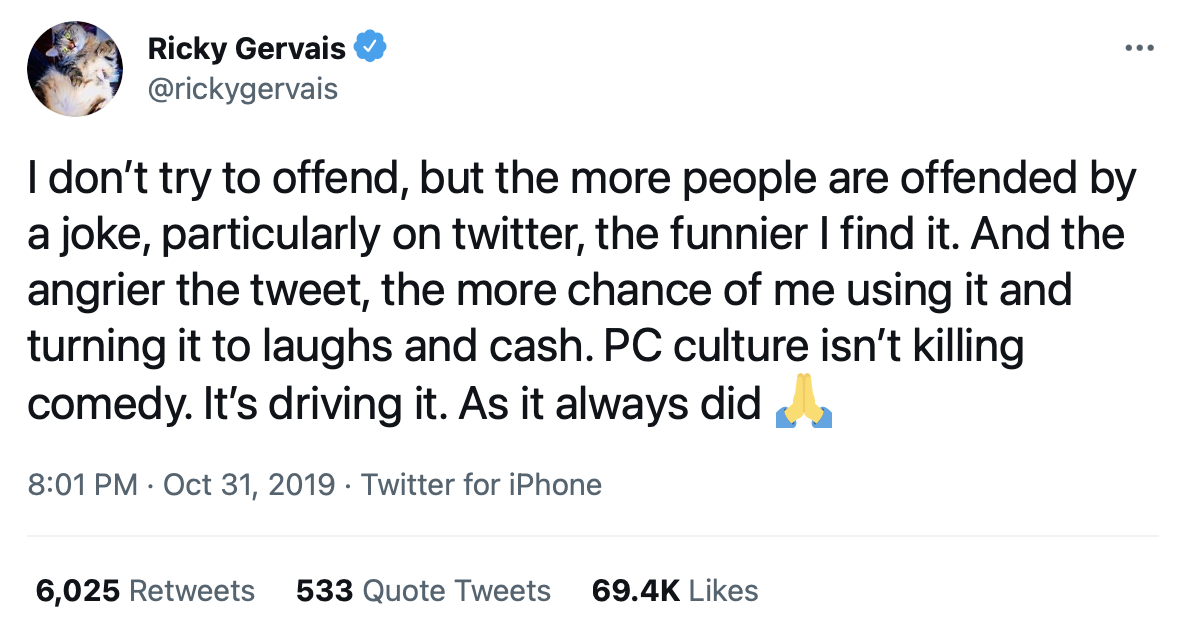 Gervais sharing this particular clip from his “Humanity” stand-up show goes to show that he still fervently advocates for freedom of speech, which is the main reason why he still holds a grudge against social media and the Twitter cancel mob.

As a comedian, Gervais understands that comedy should not be censored, and that no group should be off-limits.

Speaking to that notion, when talking specifically about comedy and why comedians should not be discouraged by the cancel culture mob during an interview with 60 Minutes Australia, the comedian asserted, “There is no subject you can joke about, but it depends on the target” . 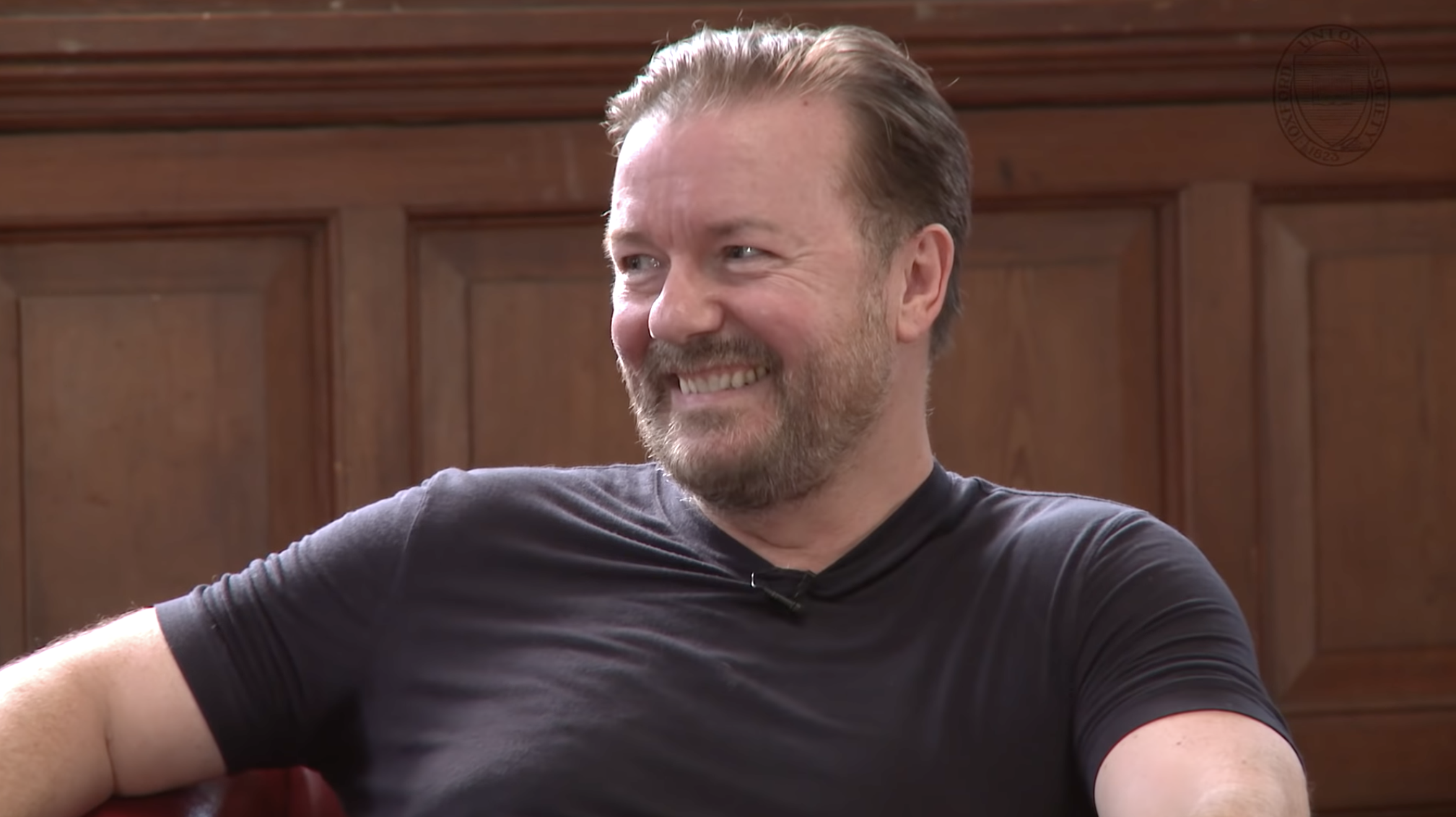 “People get offended when they mistake the subject of the joke with the actual target, and they are not necessarily the same,” Gervais continued. “I’m an atheist. I don’t run into churches and say ‘this is a load of bollocks’. It’s not the forum for it.”

Gervais then added, “When I’m tweeting, that’s my church. This is my house, my rules. If you don’t like it, you can leave. That’s your form of protest.”

“You can leave and never watch me again, and tell people I’m an a**hole. Good luck to you. But I’m going to carry on saying what the f*** I want,” he concluded.

What do you make of Ricky Gervais’ take on social media and Twitter users who get easily offended? Let us know all about in in the comments section down below or on social media.