TSR Games has fired its Twitter account manager and hired a new Public Relations Officer after comments made by company employees, including the aforementioned manager and founder Ernie Gygax Jr. sparked outrage across social media and resulted in several organizations cutting ties with and condemning the newly revived company. 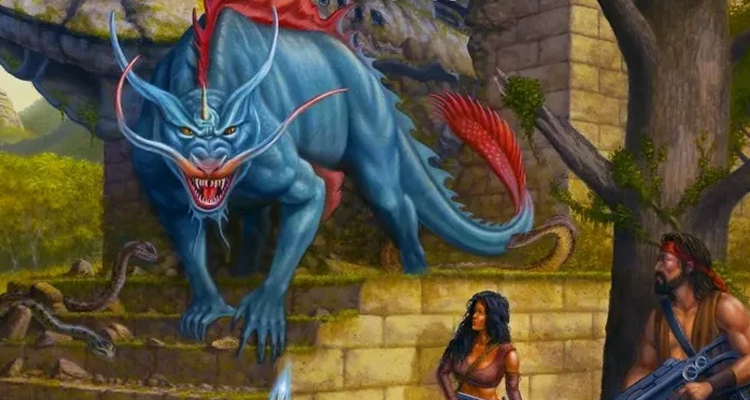 Near immediately after Gygax Jr.’s recent June 15th appearance on SciFi4Me TV’s ‘Live From The Bunker’ podcast, which saw the veteran developer criticize both Wizards of the Coast’s handling of the Dungeons & Dragons brand and the rising trend among tabletop communities towards rejecting players who do not follow ‘modern trends’ based on critical race and social justice theory, TSR Games’ Twitter account was inundated with outraged complaints over the founder’s statements.

In the wake of this wave of backlash, the now-former (and currently unknown) TSR Games social media manager responded to a large swath of both fans and critics who were voicing their concerns, though many of those in the latter camp took offense to a number of the replies they received in response from the official company account.

For example, in the face of numerous criticisms of Gygax Jr.’s opinions, the TSR Games account adamantly held that the interview was “Ernie’s opinions not ours” and that “Ernie is Ernie,” but also that they “really do our best to keep politics out of it,” and “welcome everyone.”

On June 27th, the company compared events “in recent days” to “another moment in TSR history” – the Satanic Panic of the 1980s.

“Who recalls the Satanic Panic?” asked TSR Games. “Ends up some people, even today, still believe the #TTRPG & #DnD are in fact evil.” 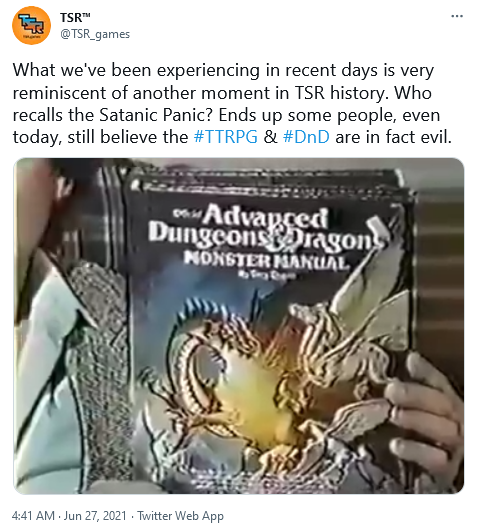 Yet, admittedly, not all the account’s tweets on the subject were as polite as the ones above.

When Tabletop Twitch Affiliate @MTD_Jake asserted that “@TSR_games has taken up the banner for misogyny and anti trans/nb and I want no part of that,” TSR Games replied, “It’s really hard right, here are some tissues.” 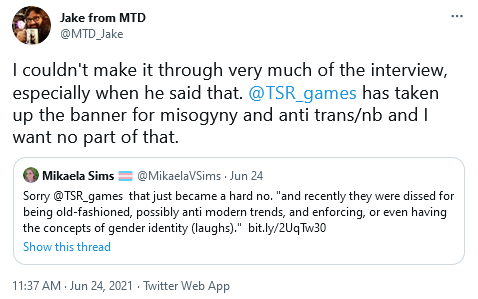 After being criticized for tweeting “The TTRPG is the original safe space”, as user @Ushimimi asserted that the company was misusing a term meant to define a place “where people with serious trauma and things like PTSD will be able to avoid having an episode triggered,” TSR Games replied, “Actually many of our players & team members are vets &/or have PTSD.”

“That’s IS exactly what we mean,” they added. “Thanks cow.” 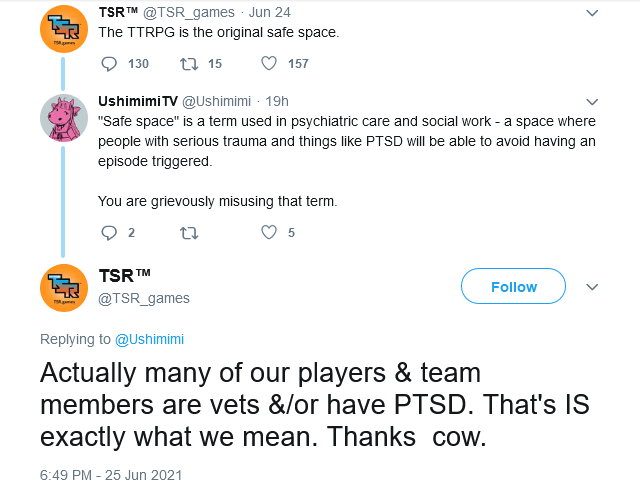 Further outrage was prompted when Gygax Jr. himself, while attempting to make amends and clear up confusion regarding his interview through the publication of a lengthy statement to his personal Twitter account, recalled how during his adolescence he routinely imagined shooting a number of upperclassmen who had bullied him.

“I played the Violin and often I began to wish that indeed I did have a Thompson 45 Machine Gun inside so that I could wipe away some of those laughs,” he tweeted at one point amidst his extended response.”

As complaints began to mount against TSR Games, with an overwhelming amount of outraged directed towards Gygax Jr.’s interview, a number of organizations announced that they would be completely cutting ties with the fledgling developer.

One of the organizations to do was Gen Con, who in response to a now deleted tweet ostensibly asking whether they supported or condemned TSR Games’ ‘behavior,’ firmly declared, “Gen Con is not associated with TSR Games and we don’t support their recent statements.”

“While the foundation of Gen Con is tied with the history of TTRPGs, our goal is to build off the good, acknowledge the bad, and work toward a present free from racism, misogyny, and homophobia,” asserted the popular tabletop convention. 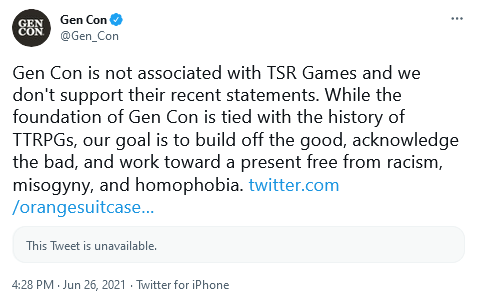 Similarly, Jay Elliot’s TSR Games, a separate entity from Gygax Jr.’s company which coexists as the result of an ongoing sniping battle over the trademark for the name, revealed on June 27th that they were reversing on their previous decision to license the TSR Games name from their competitor, informing their fans that they would no longer “be licensing anything from the new company claiming rights to the TSR logos.”

“We are not working with them in any fashion,” affirmed the company, which has since adopted the name of their latest game, Top Secret, as their current working name. 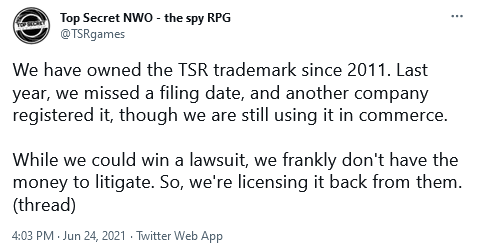 These two organizations were soon joined by The Game Manufacturers Association, who wrote on June 28th that they were “aware of the appalling statements published by TSR Games and their founder” and assured their followers that they did “not condone nor agree with any part of it,” as they instead prided themselves “on supporting and promoting inclusivity always,”

“Our motto is ‘a game at every table, a table for everyone’,” asserted GAMA. “Transphobia, racism, and sexism will not be tolerated. That means that TSR is not welcome at Origins Game Fair, GAMA Expo or any event affiliated with our organization.”

However, like many companies before them, TSR Games eventually caved to the demands of the critics pounding on their door.

On July 1st, a newly hired Public Relations Officer, ‘Michael,’ introduced himself through the company’s public Twitter account, announcing that “The individual that was handling this account is no longer with TSR,” and asked players to “Please direct all future TSR communications to me.”

Michael also promised that “in the coming week,” the company would release a video “ featuring Ernie Gygax in which he will address SciFi4Me TV’s “Live from the Bunker 277” Interview [and] the childhood story he posted on his personal Twitter account.”

In conclusion to his statement, the PR officer asked users to “Please stand by…” 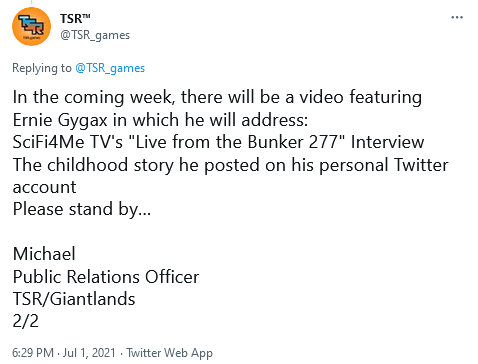 What do you make of this latest development in this latest chapter of TSR Games’ story? Let us know your thoughts on social media or in the comments down below!