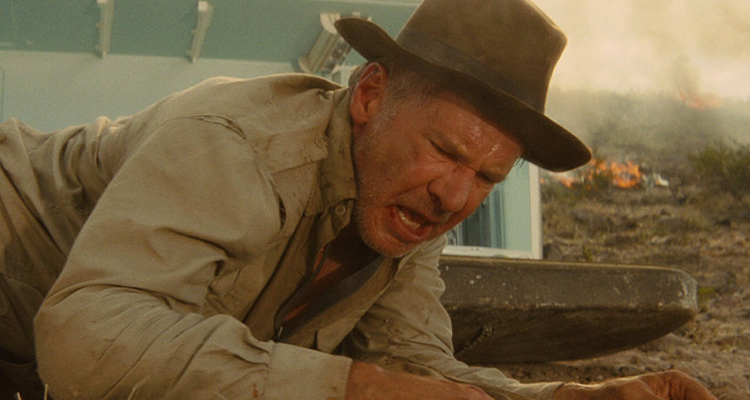 As seen in a series of photos included in a pair of articles published by UK news outlet The Daily Mail and shared by a number of users on social media, Ford’s stuntman appeared on  the film’s Glasgow set on July 17th to film a 1960s flashback action sequence wherein Indiana Jones gives chase on horseback to an as-of-yet unknown character, assumed to be portrayed by actor Boyd Holbrook, through a celebratory parade being held in honor of the then-recently successful Apollo 11 spaceflight.

According to the set photos, Ford’s stunt double was even used in lieu of the actor for scenes of Indiana Jones simply walking, suggesting that his Ford’s aforementioned shoulder injury, sustained while rehearsing a fight scene, may be, as rumors have noted, more severe than initially reported.

While the set photos reveal little plot details outside of the chase sequence’s setting, they do reveal that, during the filming of this scene,stunt double was covered in black facial motion tracking markers.

Given Ford’s recent on-set injury the use of tracking markers on his stunt double, especially in light of the fact that Holbrook’s stuntman does not appear to be wearing the same equipment, it seems likely that Indiana Jones 5 will make heavy use of CGI facial replacement technology in order to both allow it’s star time to heal and the production to continue in his absence.

However, whether the end result will present itself more like Chris Evans in Captain America: The First Avenger, who was allowed to physically act with his onscreen counterparts while shooting in order to capture a more believable performance, or Tig Notaro in Zack Snyder’s Army of the Dead, who shot her scenes in front of a green screen without any of her costars and was later digitally added in whole to the film, remains to be seen.

What do you make of the latest Indiana Jones 5 set photos? Let us know your thoughts on social media or in the comments down below!