Marvel Cinematic Universe stans are upset that Marvel is promoting the upcoming What If…? show and Captain Carter on their Captain America accounts.

The official Captain America account recently renamed itself to Captain Carter and featured a new bio that reads, “See Captain Carter in a new episode of Marvel Studios’ What If…? Wednesday on Disney Plus.” 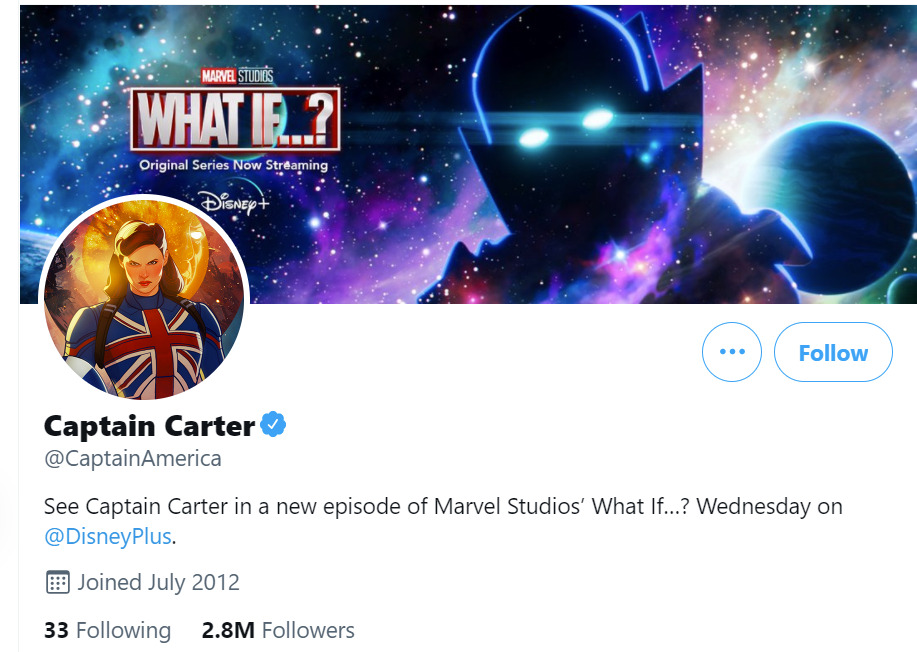 Along with changing their name and bio, they also recently promoted the show with two new posters featuring Peggy Carter and Steve Rogers as their What If…? variants.

In one tweet they wrote, “See Peggy Carter and Steve Rogers in a whole new way this Wednesday when the first episode of Marvel Studios’ WhatIf starts streaming on DisneyPlus.” 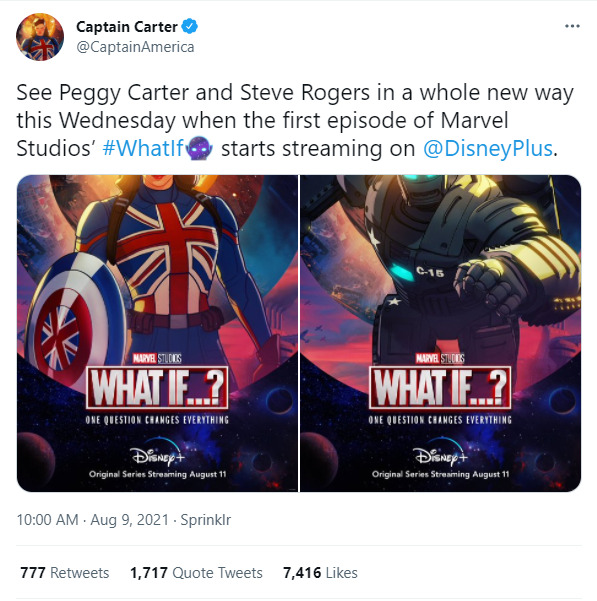 Another tweet featured a short 30 second clip from What If..?

It reads, “This Wednesday, reveal the secrets of the multiverse in Marvel Studios’ What If…? and stream the first episode of the Original Series on Disney Plus.”

This Wednesday, reveal the secrets of the multiverse in Marvel Studios’ #WhatIf and stream the first episode of the Original Series on @DisneyPlus. pic.twitter.com/jX2THriUjR

Fans reacted to this change to the Twitter account and the promotion of Captain Carter with outrage and disappointment among other emotions. 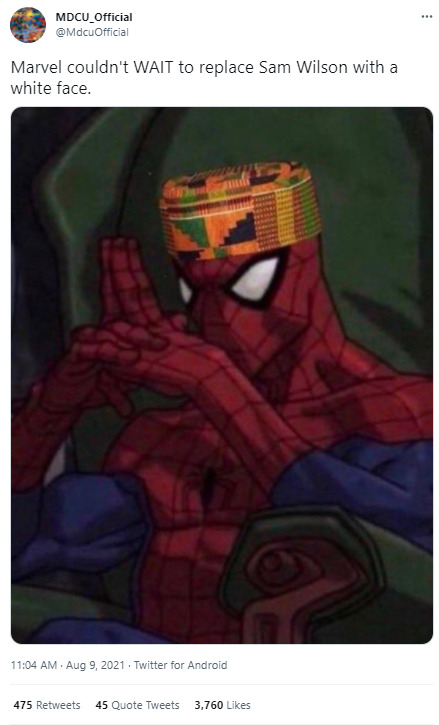 Another wrote, “the way that marvel is doing more to show off captain carter than they have been doing to show off sam wilson WHO IS ACTUALLY CAPTAIN AMERICA is something else.” 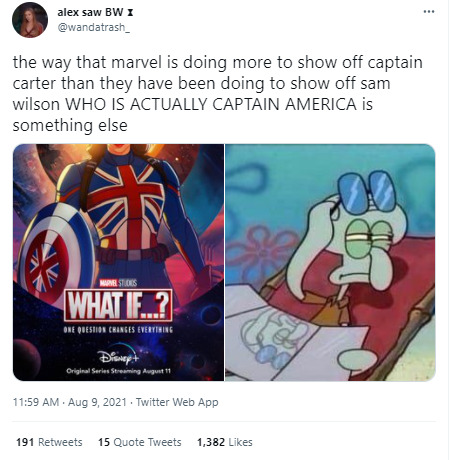 Twitter user fangirlzzzz wrote, “Marvel with FATWS: we have a black Cap, folks!!!”

The user added, “Marvel 5 minutes later: we’re going to erase Sam Wilson from ‘What if…’ and give the Cap mantle to an upper-class British white woman that was in charge of recruiting nazis!!!” 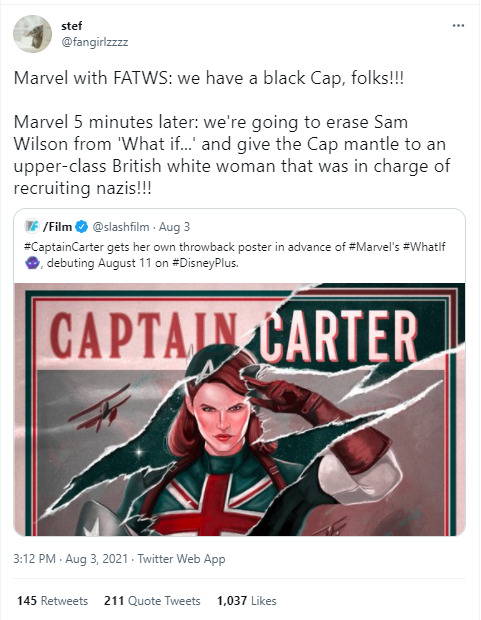 Lokisverity wrote, “look i’m excited for peggy content but NOT like this. she’s not even captain america – make a new account for captain carter and put Sam Wilson back where he belongs.”

Armorwars wrote, “will only accept this if they also changed Guardians of the Galaxy’s account to a picture of t’challa as star-lord or something because this is really weird to remove sam wilson like that when you could just market this show through… you know… What If…?’s Twitter account.” 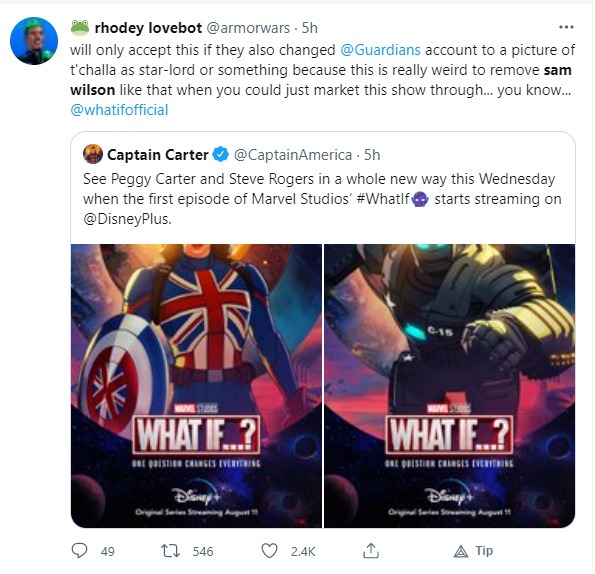 Caps_Marvelette tweeted, “how are they gonna put her on the captain AMERICA page when she’s sporting straight BRITISH wear. give this account back to sam wilson and make her a new one??” 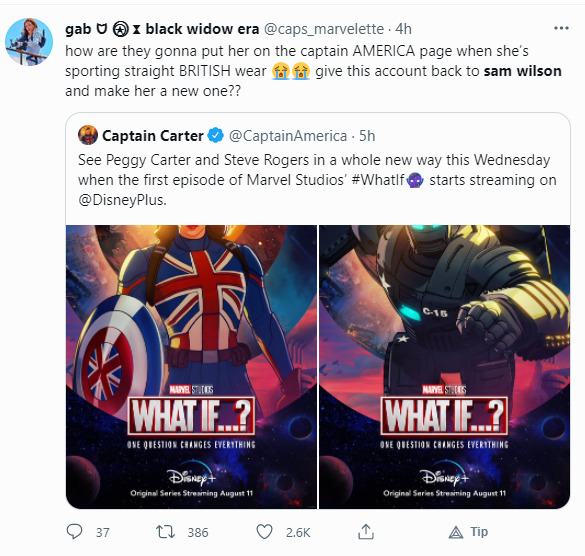 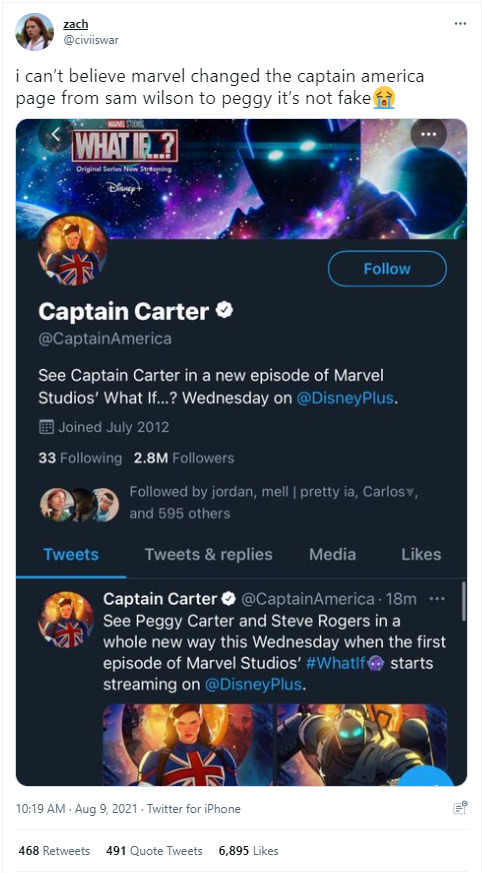 Buckycap wrote, “not even a sam wilson pfp ONCE… not even a ‘Captain Wilson’ dn ever….. all we got was the header and the bio which were both not visible unless you click the profile….” 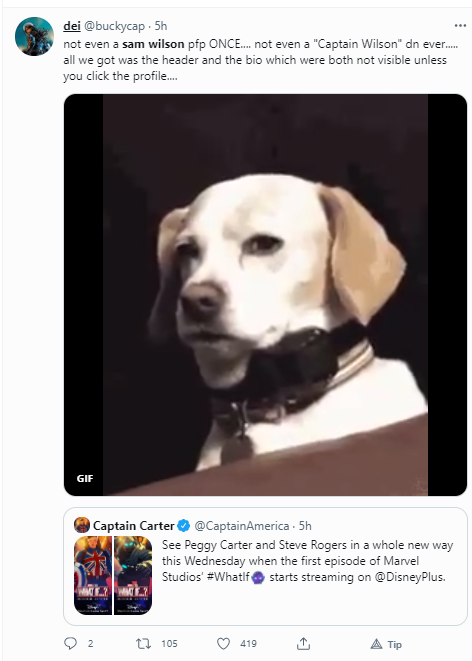 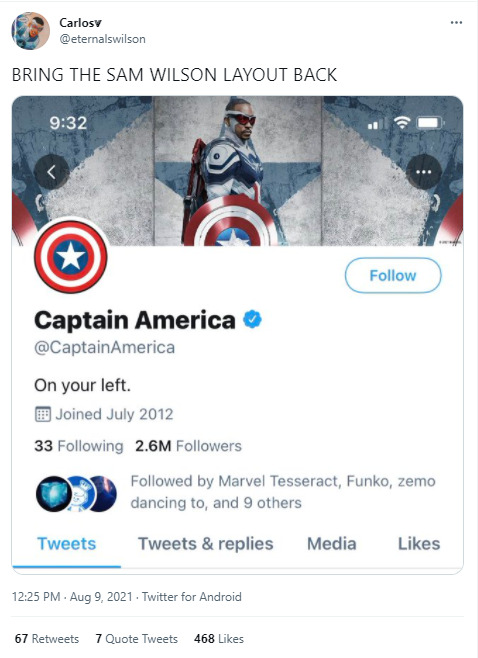 What If…? arrives on Disney Plus on Wednesday, August 11th.

What do you make of the outrage, disappointment, and other emotions these Marvel stans are expressing towards Marvel for changing the official Captain America account to Captain Carter in order to promote the upcoming What If…? series on Disney Plus?