An explosive new lawsuit has alleged that not only did former Saturday Night Live comedian Horatio Sanz sexually abuse a teenage fan in the early 2000s, but that his SNL co-star Jimmy Fallon was fully aware of the crime. 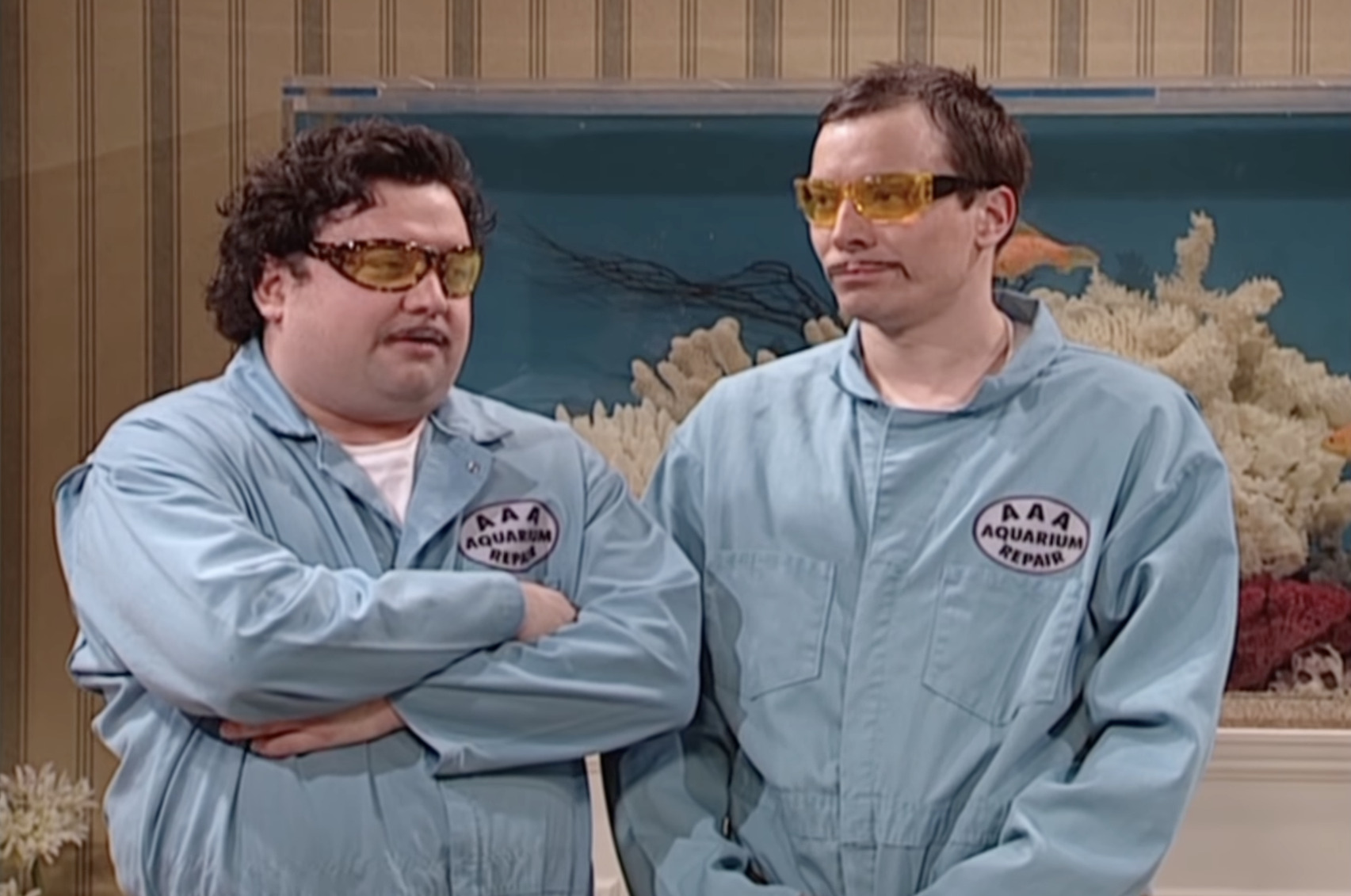 According to the lawsuit, NBC and Saturday Night Live enabled Horatio Sanz’s grooming and eventual molesting of the Plaintiff, who has chosen to remain anonymous, in the late ’90s and early 2000s.

The document reads, “In 1999, Plaintiff JANE DOE, then aged fourteen (14) years, who was a huge fan of Saturday Night Live (“SNL”), started posting on various online websites, message boards and chatrooms about SNL,” even administering and engaging in her own fan websites and news groups – all of which were actively read by members of the SNL cast, as well as NBC staff. 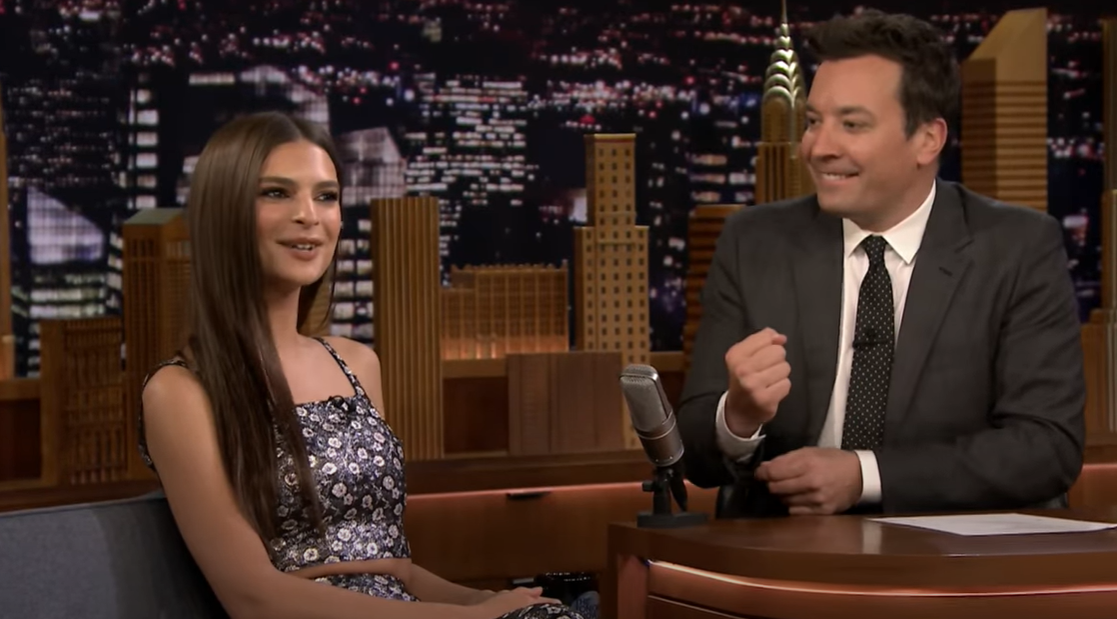 Two of these Saturday Night Live cast members, Horatio Sanz and Jimmy Fallon, reportedly began to exchange emails with the Plaintiff in January of 2000, when she was only 15 years of age at the time.

This contact eventually led to a meet-up between Sanz and Plaintiff in October of the same year, wherein he met with the underage girl at NBC after an airing/taping of the show. 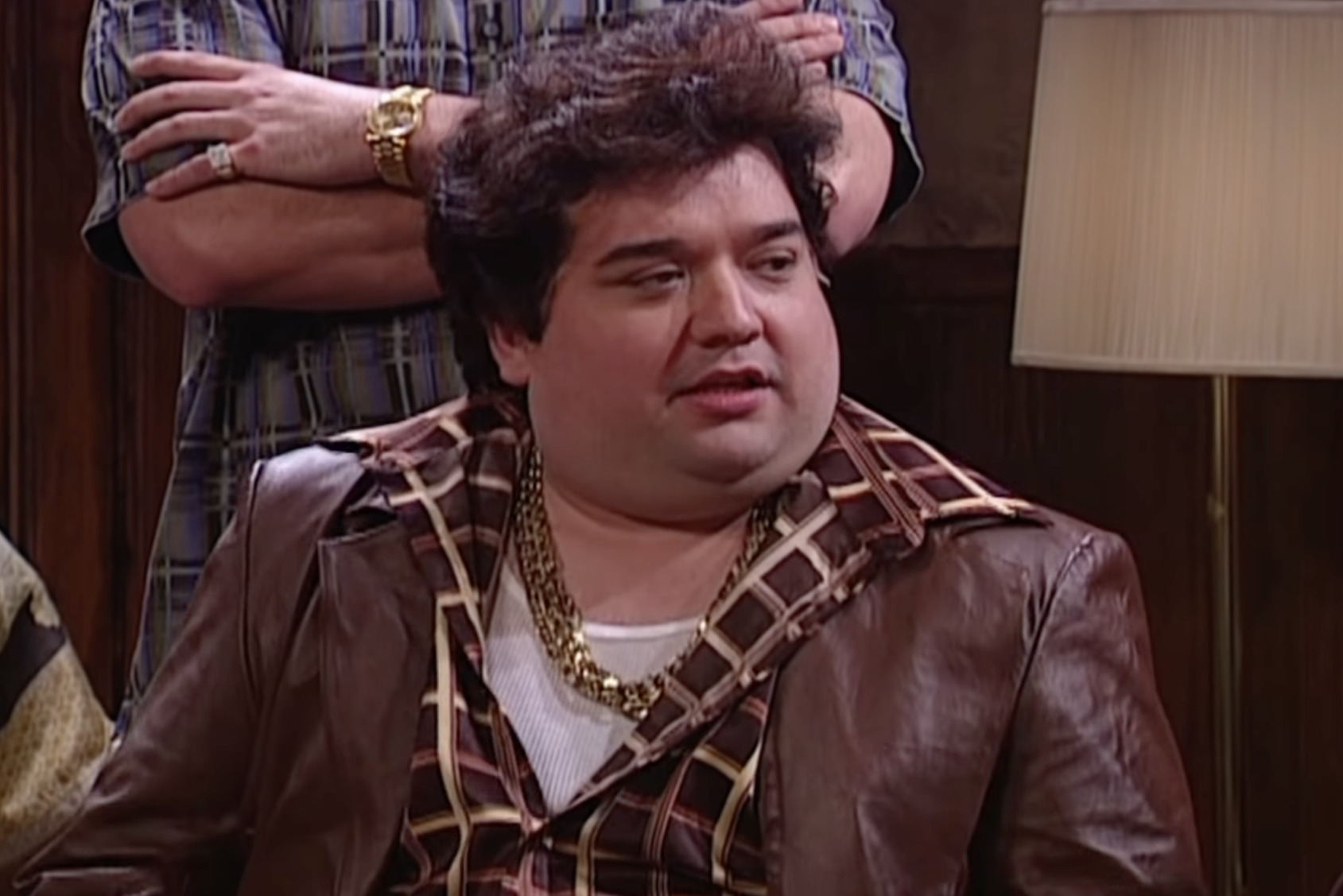 Around May of 2001, when Plaintiff was only 16, she was invited to attend to one of Saturday Night Live’s after parties. There, she was allegedly allowed to freely consume alcohol alongside Sanz and other members of the cast, while, as everyone was fully aware, she was underage.

According to the accuser, Sanz spent time drinking alcohol with the Plaintiff (which is noted to have happened more than once, each and every time in full view of other SNL cast and crew) before allegedly groping her.

Plaintiff further claims that Sanz encouraged her to take “revealing photographs”, as well as pictures that “depicted her as more mature,” and reveals that, when she ran into the comedian in 2019, he actually admitted  to – and bragged about – having “cybersex” with her. 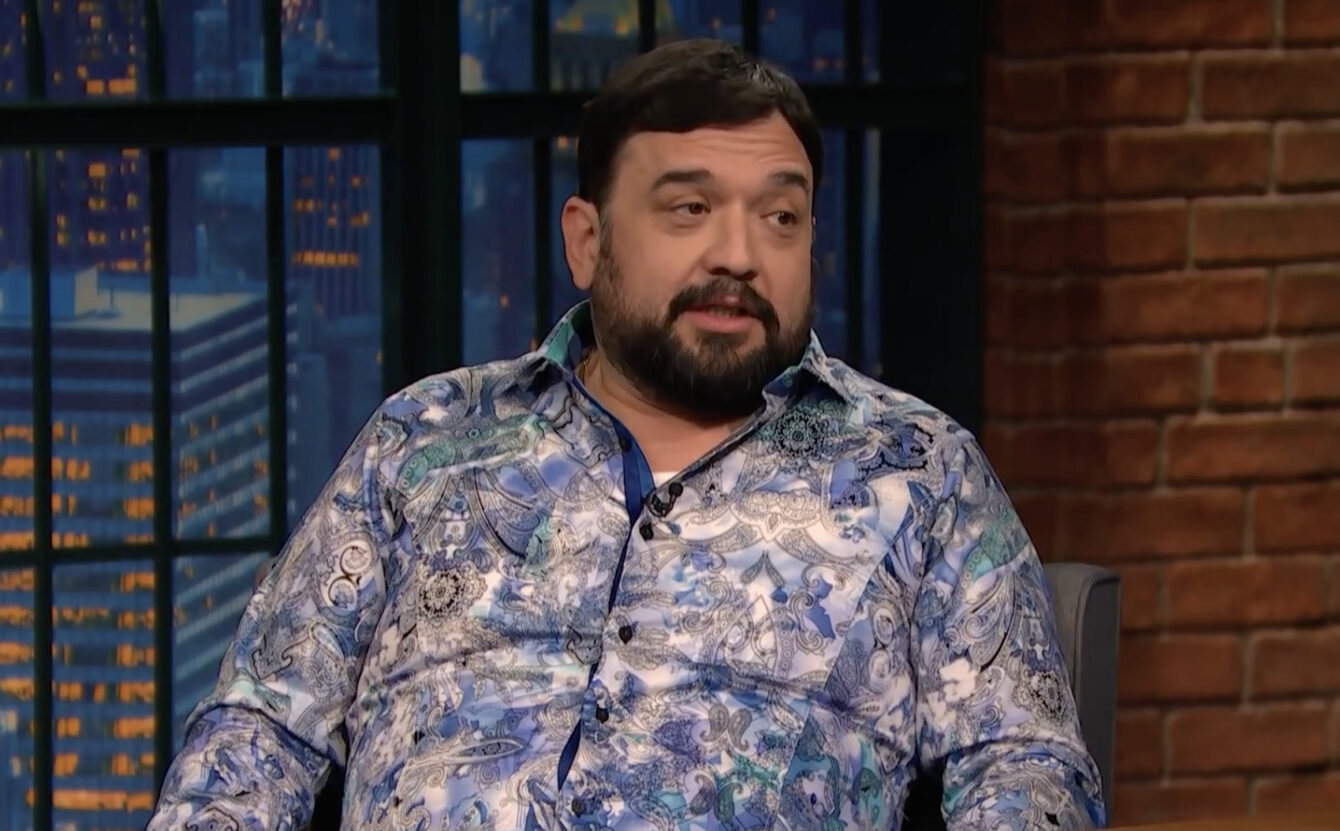 In a statement shared with People Magazine on Friday, Sanz’s lawyer, Andrew Brettler, asserted that the accusations were “categorically false” and claimed that, in fact, the unnamed accused had actually tried to extort the comedian to the grand sum of $7.5 million.

“This individual’s claims about Horatio Sanz are categorically false. However often she repeats her ludicrous allegations or tries to rope in other high-profile names to generate media attention, they will always be false,” read the statement.

Brettler’s statement continued, “Before filing this lawsuit anonymously, she demanded $7.5 million in exchange for her silence. We, of course, refused and will vigorously contest these totally meritless claims.”

Following the lawsuit being made public, in support of the accuser’s claims, Pitchfork associate director Carrie Corougen recalled some of the stories she had heard during her time on the aforementioned SNL message boards.

“When I was a teen in love with Jimmy Fallon (*cringes*), stories of him and Sanz hooking up with teen girls regularly made the rounds on the SNL message boards I was obsessed with—message boards they often read—with a positive spin I didn’t realize was fucked up until years later,” wrote Courogen.

“There were posts about how *cool* it was to party with the SNL cast,” she explained, “How *mature for your age* you were if they noticed you. How *special* you were.” 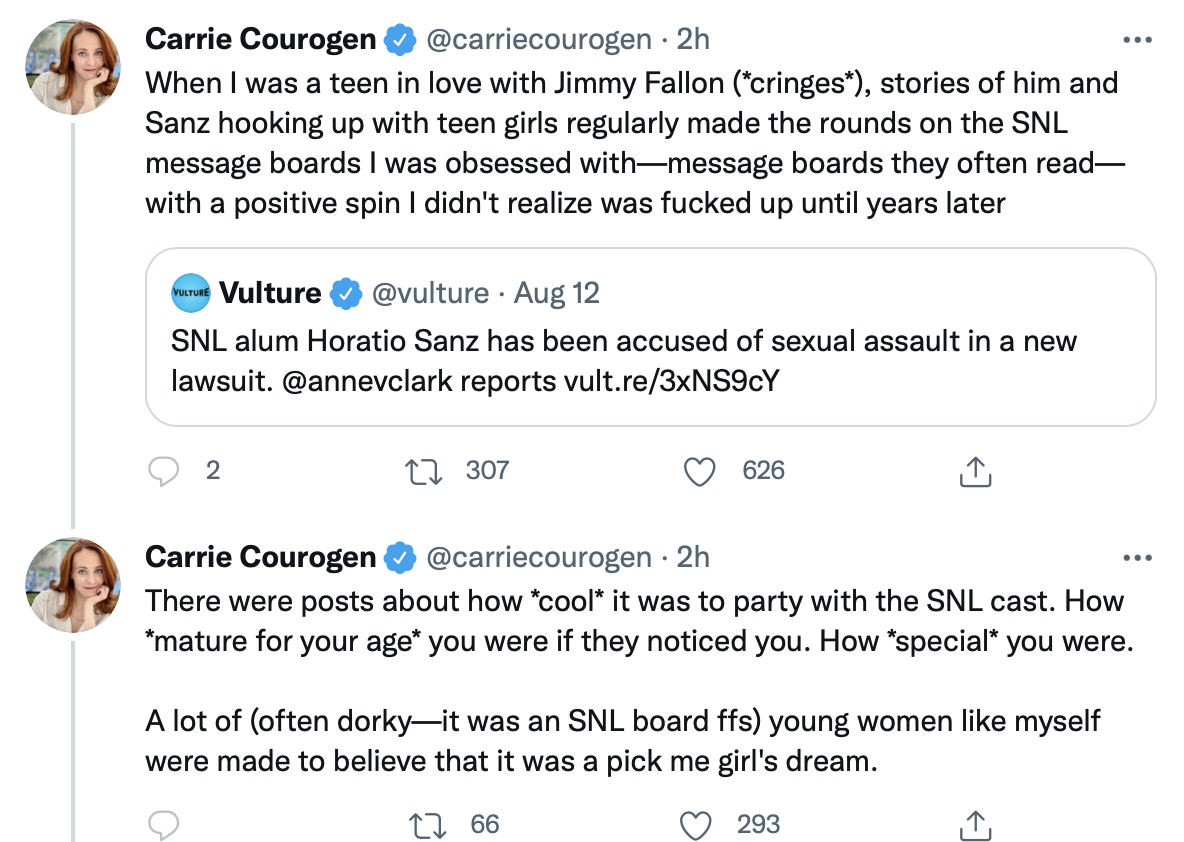 Expressing her concern, she continued, “I’m often worried about teens who grow up on today’s internet/in fandoms and get self righteous about the glory days of my extremely online youth, but really I think I just blocked out how toxic the days of message boards and chat rooms really were.”

In an interesting turn of events, Courogen eventually decided it was best to mute her thread because it had garnered the attention of Donald Trump supporters.

“muting this thread already because it is not for m*ga people!!!” Wrote Courogen. “ur not allowed to chime in on the topic of bad men or predators, bye!!” 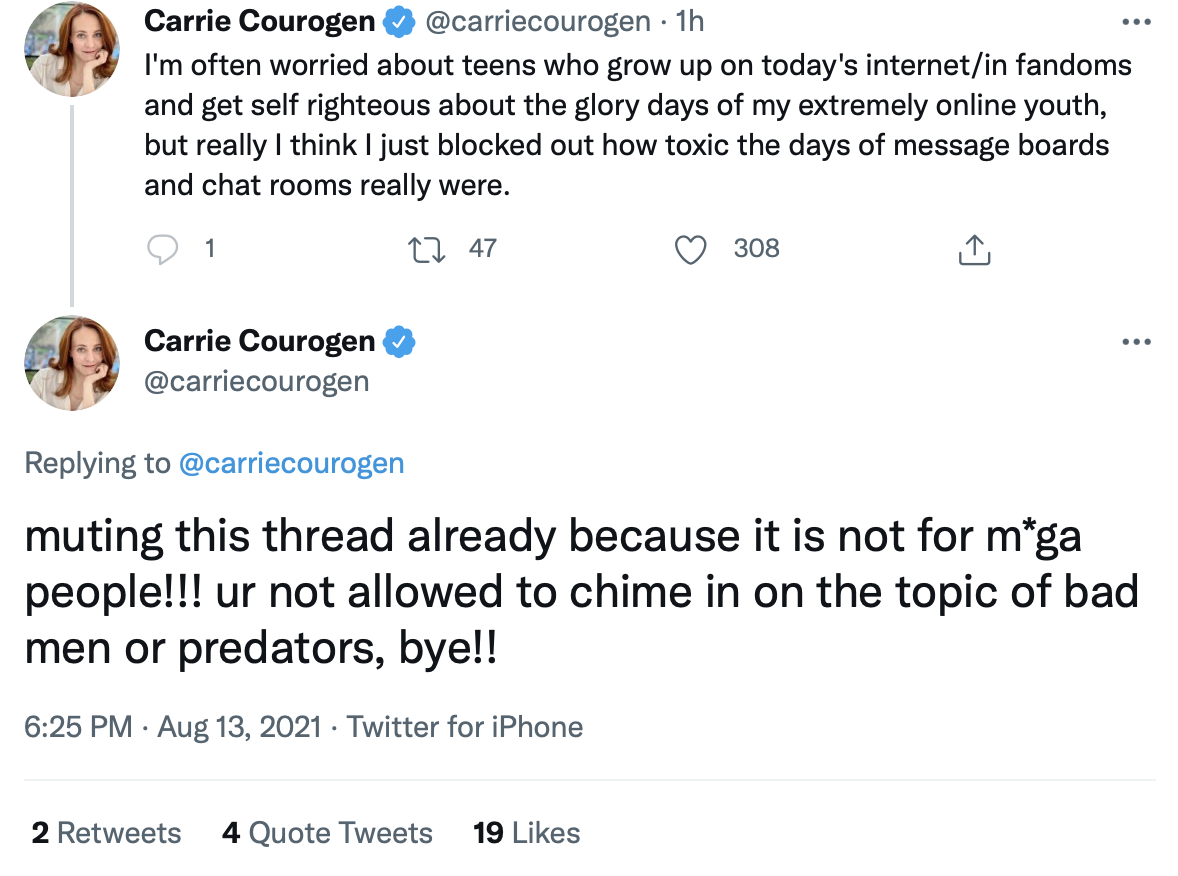 What do you make of the allegations made against Sanz, members of the Saturday Night Live cast, and NBC? Be sure to let us know your thoughts in the comments section down below or on social media!