New Warriors showrunner Kevin Biegel claimed that the Marvel show was cancelled because the show was “too gay.”

Biegel posted a slew of information about the show to his Twitter that included behind the scenes shots as well as images of Milana Vayntrub as Squirrel Girl.

He first posted, “Feelin frisky. May do something uncouth.”

He then declared that the show was cancelled because an executive thought it was “too gay.”

Biegel tweeted, “There’s a show we wrote a few years ago. It was very proudly gay. A SINGULAR power that be killed the show. Because it was too gay. A rich, straight, Brentwood turd.”

He then added, “He got fired for being vile at his company. We, on the other hand, live. #newwarriors” 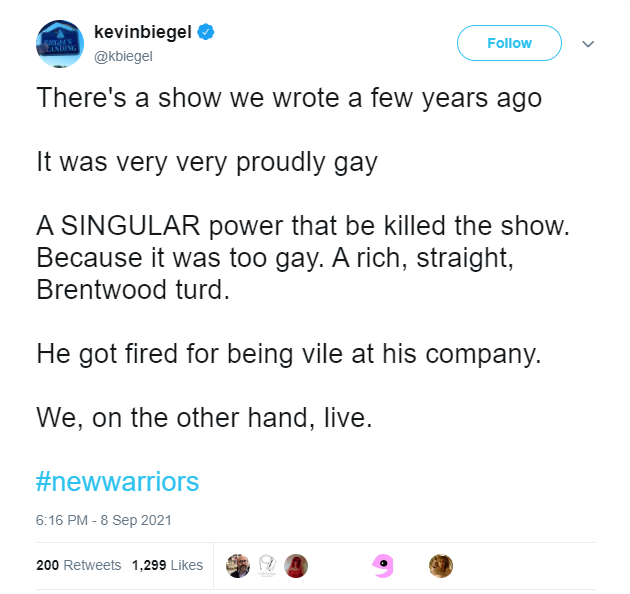 He then reiterated, “It would’ve meant the world to us, too. Sadly we didn’t get to share it with you. If this was a ‘the show was crap’ situation, I’d totally shut up and never speak.”

“Unfortunately, this was a ‘high level exec with an agenda’ situation. He got fired. I still miss our show,” he stated. 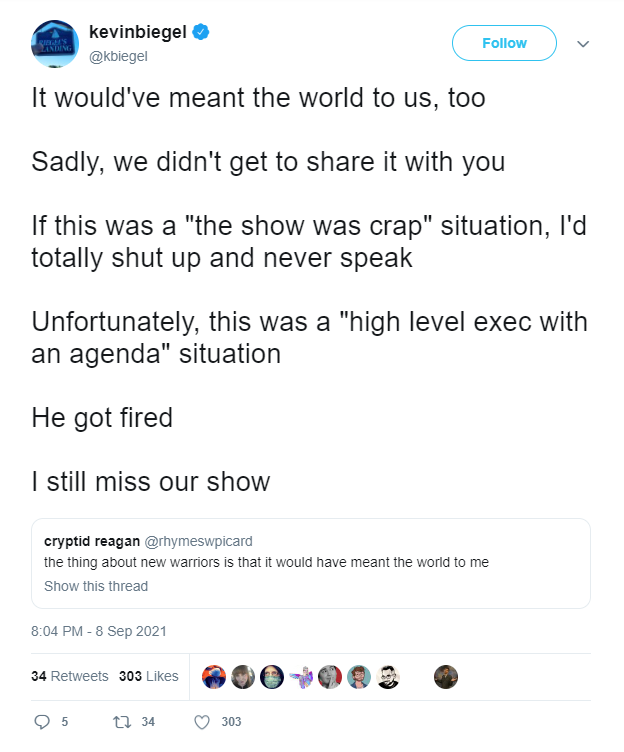 In a subsequent tweet, Biegel added, “I have nights where I can’t fall asleep because I get so mad we couldn’t have characters say stuff like this — because of one exec who though we were making a show that was ‘messy.’

“Sorry. Not sorry. #Newwarriors woulda been really great. I wish we could’ve given it to y’all.”

He also shared part of the script that reads, “As far as I can tell, I’m the only one like me. Black. Queer. Powered. When I was a kid, I didn’t have anyone like me to look up to, to tell me things were gonna be okay. Maybe I can be that person for some little girl out there.” 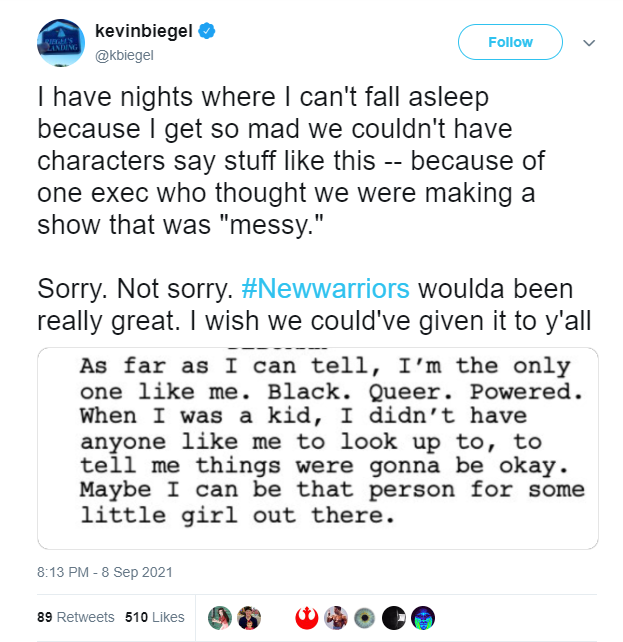 Biegel would then claim that he would not be deleting any of his tweets. However, he deleted them all.

He wrote, “F*** it, I’m not deleting s**t. I love our characters. I love Marvel. I love love love the New Warriors, in all their forms.”

This show would make the world better, even a little bit. Thanks for following all my bs posts. We love you,” he added. 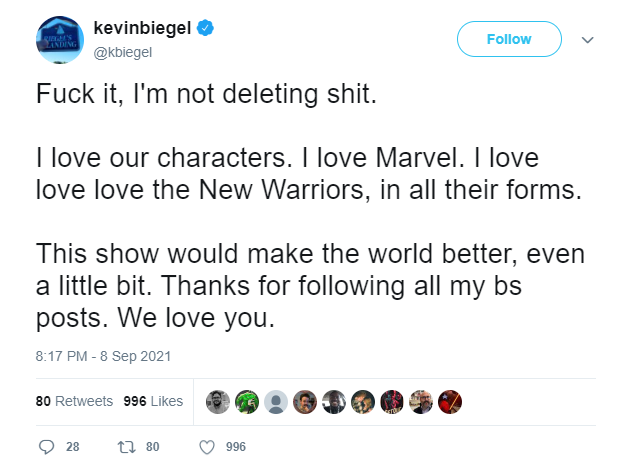 In another tweet, he added, “I love our show. I love our cast. I love that our show says ‘All outcasts and weirdos welcome.'”

“The world is terrifying right now. I’d rather share our joy than be too scared to share it. Doing the right thing in the face of criticism is what the #newwarriors are all about,” he added. 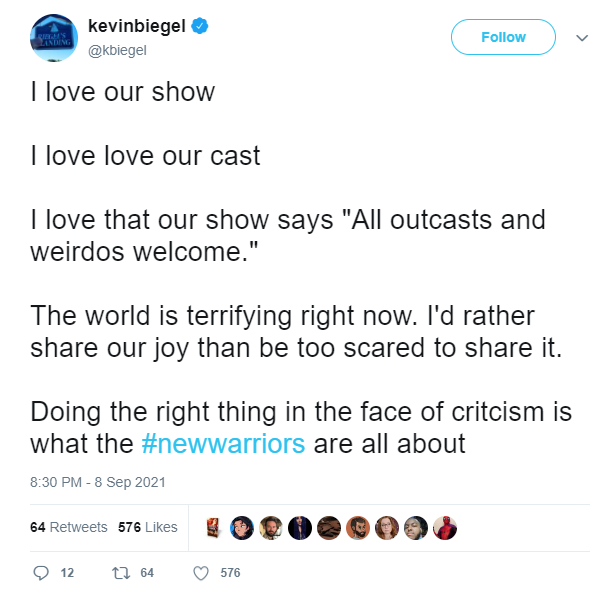 Biegel would proceed to share a bunch of videos from the set, although he has since deleted those tweets.

However, he shared more set photos from the show where the team is in a bar called Fabian’s. He noted the bar was named after Deadpool creator Fabian Nicieza. 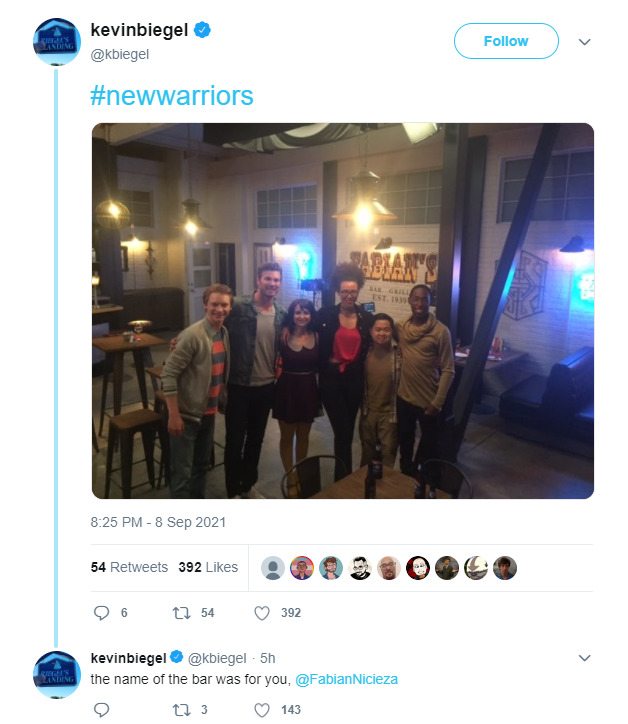 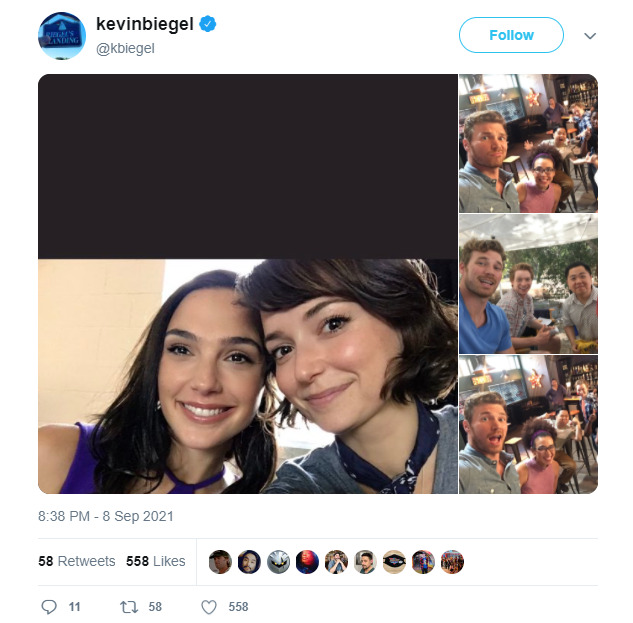 He also shared a photo of Vayntrub as Squirrel Girl and Derek Theler as Mister Immortal. 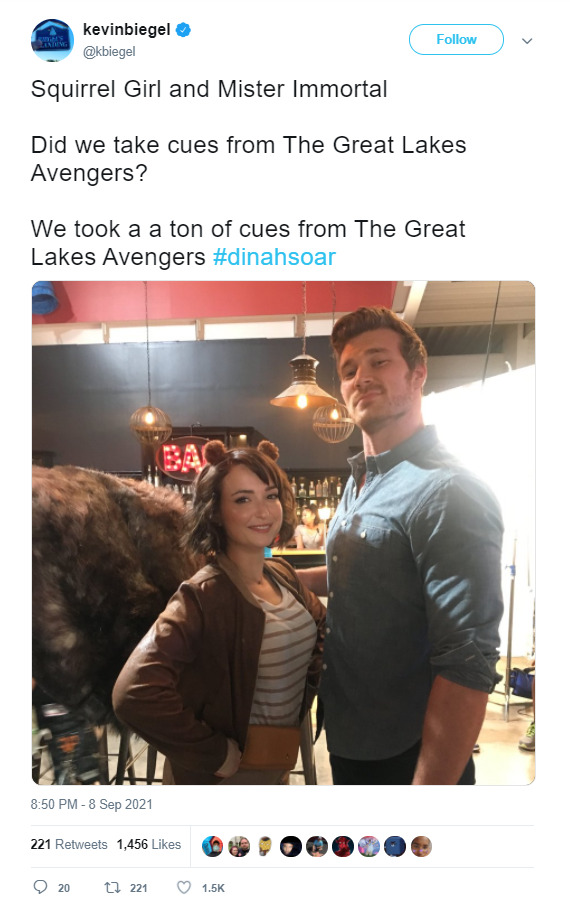 Biegel then reiterated the show was axed by one executive tweeting, “Thank you for the kind words re our #newwarriors show. It would’ve been totally different than any superhero show ever (up to this point, I mean sure someone is gonna do something akin to us at some point).” 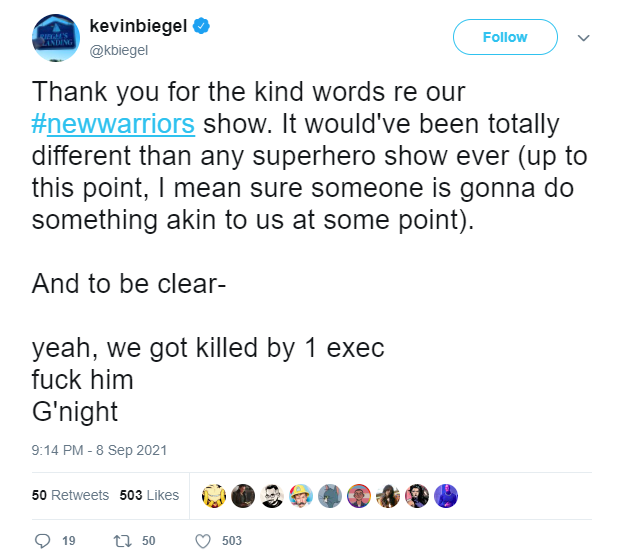 While he said “G’night’ he did share shots of Vayntrub as Squirrel Girl. 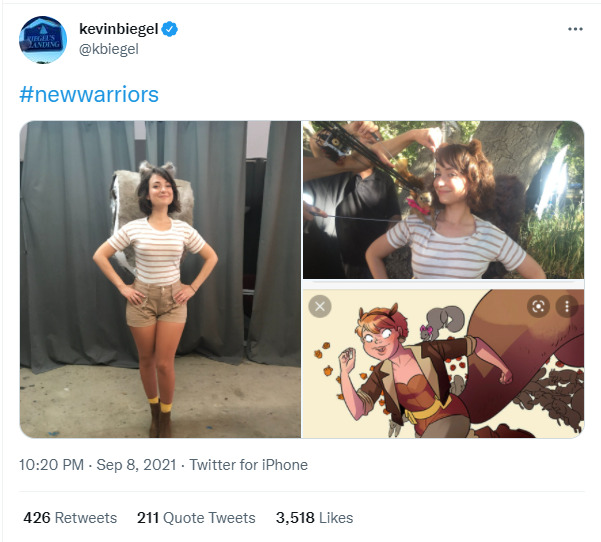 Here’s a better look at the two photos of Vayntrub.

And here’s the other shot. 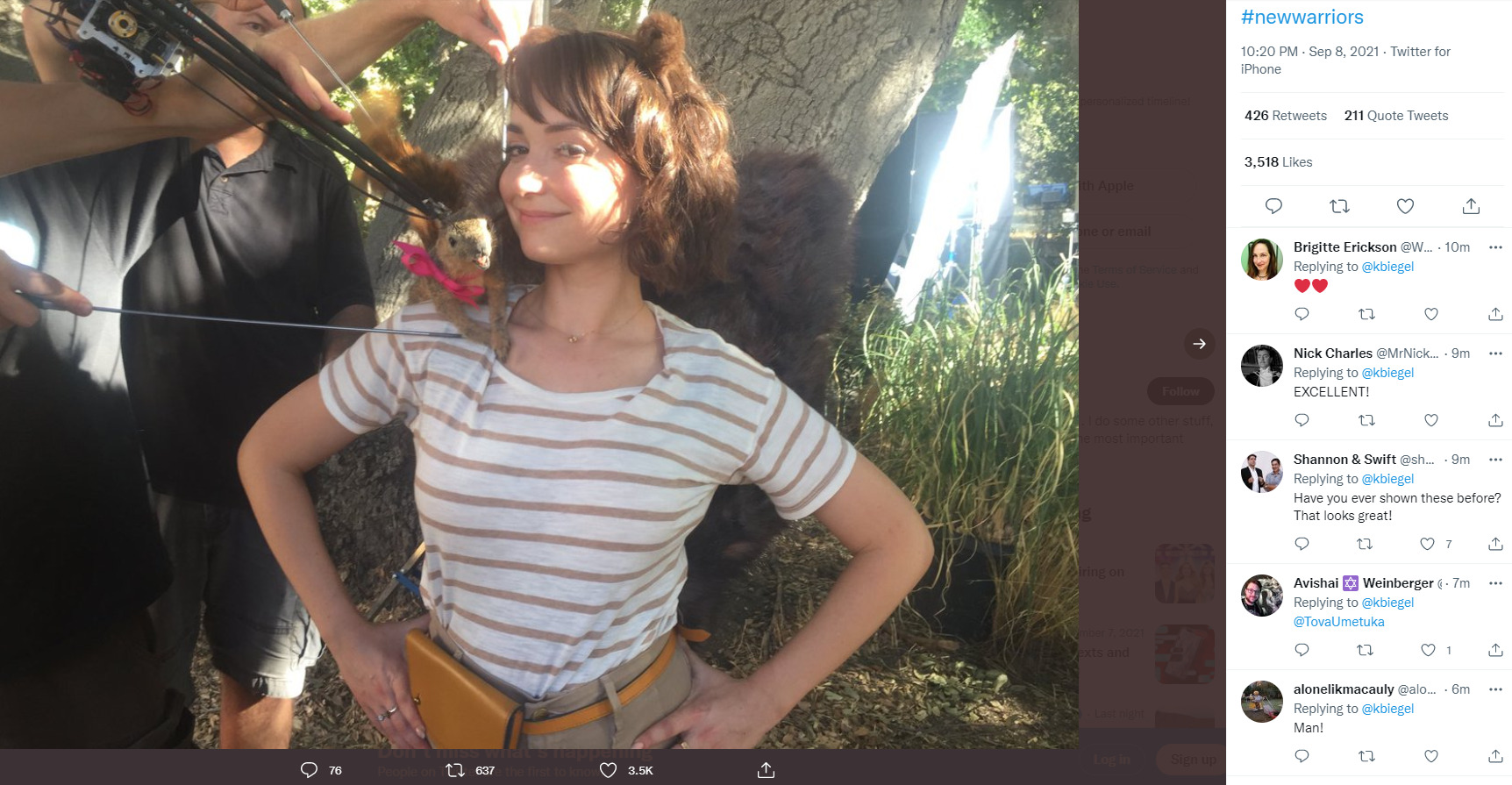 While Biegel claims the show was axed by an executive because it was “too gay,” CBR reported that “a Marvel spokesperson denied these claims, telling CBR the company was fully supportive of the show and that after Freeform and other distributors passed, the project did not move forward.”

New Warriors was originally produced by Marvel Television and was developed for Freeform and had a straight-to-series order in 2017.

Hoverer, by November 2017 The Hollywood Reporter noted the show would not be airing on Freeform, and that it was being shopped around. By 2019, it was reported by GWW that the show was “officially dead.”