Other members of the cast include Jack Black as Bowser, Seth Rogen as Donkey Kong, Keegan-Michael Key as Toad, Fred Armisen as Cranky Kong, Kevin Michael Richardson as Kamek, and Sebastian Maniscalco as Spike.

Veteran Mario voice actor Charles Martinet is also part of the movie and will be doing a number of “surprise cameos.”

The movie is being directed by Aaron Horvath and Michael Jelenic. They previously worked on Teen Titans Go! and Teen Titans GO! To the Movies together. Jelenic previously produced ThunderCats Roar, Batman: The Brave and the Bold, Batman vs. Two-Face, and the 2011 Thundercats series.

The script for the film was written by Matthew Fogel. Fogel previously wrote The Lego Movie 2: The Second Part and Minions: The Rise of Gru.

The film is being produced by Chris Meledandri and Illumination alongside Shigeru Miyamoto of Nintendo. It is being financed by Nintendo and Universal Pictures. Universal will also distribute the film.

As noted by Variety, Meledandri detailed, “Mario and Luigi are two of the most beloved heroes in all of popular culture, and we are honored to have the unique opportunity to work so closely with Shigeru Miyamoto and the widely imaginative team at Nintendo to bring these characters to life in an animated movie, unlike any film Illumination has made to date.”

Reacting to this announcement on Twitter, Leguizamo stated, “So glad Super Mario Bros. is getting a reboot! Obviously it’s iconic enuff. But too bad they went all white!”

He added, “No Latinx in the leads! Groundbreaking color-blind casting in original! Plus I’m the only one who knows how to make this movie work script wise!” 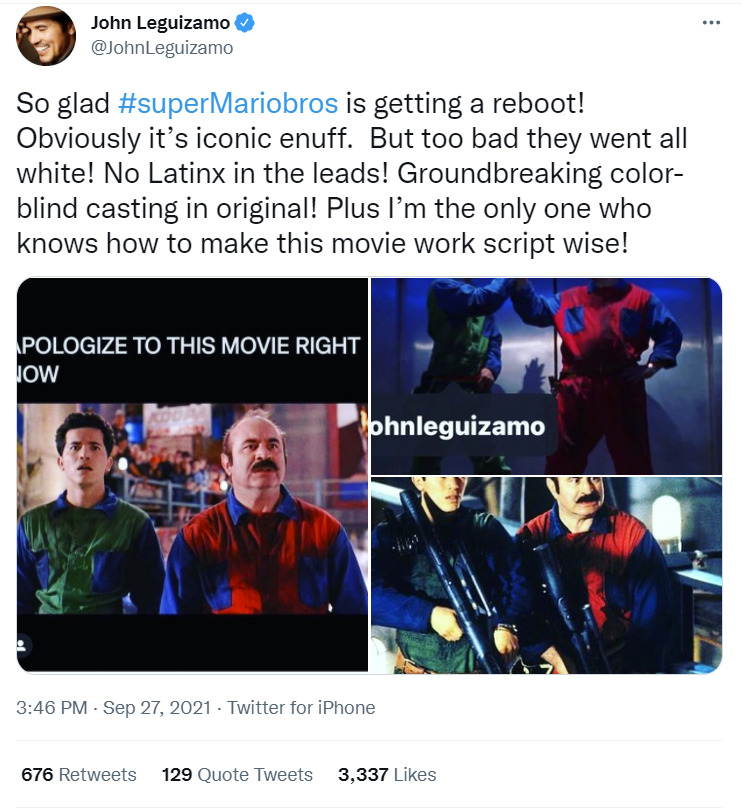 Who knew Keegan-Michael Key and Kevin Michael Richardson were white?

And if Leguiziamo is just referring to the casting of Mario and Luigi, what exactly is the problem with casting white people to voice two Italian fraternal brothers? Does he have a problem with white people voicing Italian characters?

The new Super Mario Bros. animated film is currently scheduled to arrive in theaters on December 21, 2022.

What do you make of Leguizamo’s comments regarding the voice cast for the new animated film?