The Lord of the Rings fan site, TheOneRing.net, continues to embarrass itself as they recently promoted an easily disprovable gay Elves theory.

The Nature of Middle-earth is described as “the first ever publication of J.R.R. Tolkien’s final writings on Middle-earth, covering a wide range of subjects and perfect for those who have read and enjoyed The Silmarillion, The Lord of the Rings, Unfinished Tales, and The History of Middle-earth, and want to learn more about Tolkien’s magnificent world.”

It adds, “the writings in The Nature of Middle-earth reveal the journeys that he took as he sought to better understand his unique creation. From sweeping themes as profound as Elvish immortality and reincarnation, and the Powers of the Valar, to the more earth-bound subjects of the lands and beasts of Númenor, the geography of the Rivers and Beacon-hills of Gondor, and even who had beards!” 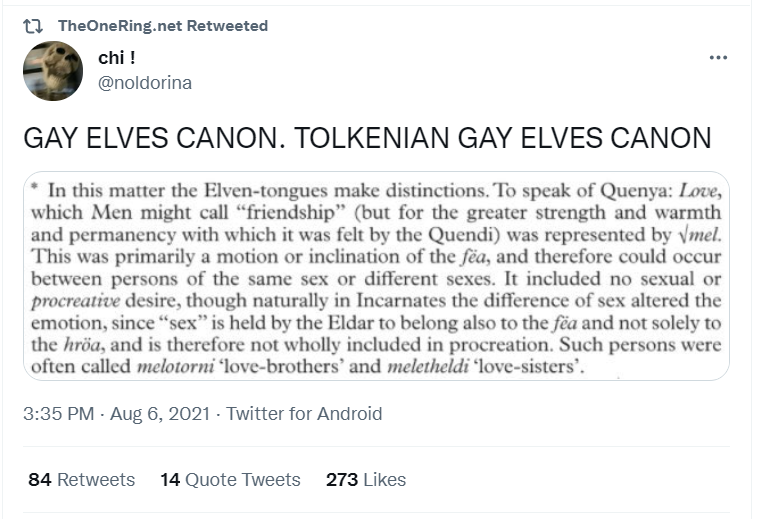 They then retweeted another user, Hector Guerra, who wrote, “Right wing Tolkien fans: ‘Amazon is going to ruin Tolkien with their gay and lesbian elves’ Tolkien: ‘The correct terms in Quenya are Meletorni and Meletheldi.'” 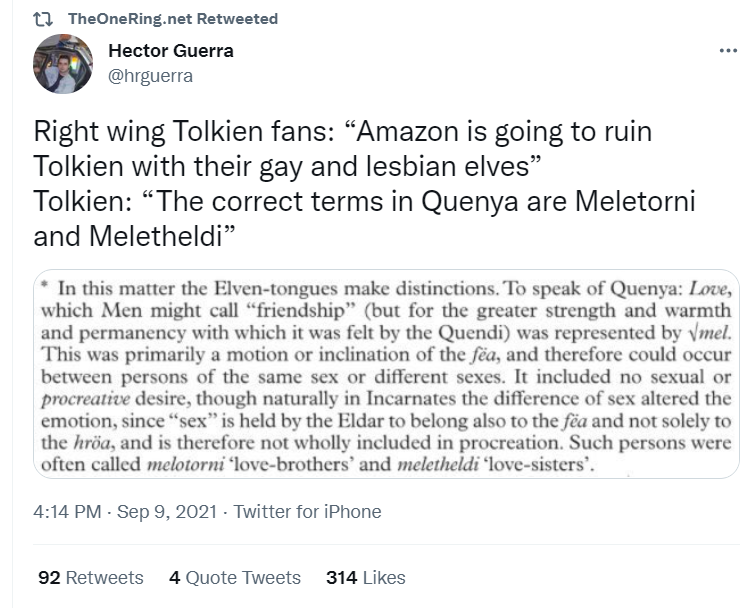 The screenshot states, “In this matter the Elven-tongues make distinctions. To speak of Quenya: Love, which Men might call ‘friendship’ (but for the greater strength and warmth and permanency with which it was felt by the Quendi) was represented by √mel. This was primarily a motion or inclination of the fëa, and therefore could occur between persons of the same sex or different sexes.”

The excerpt continued, “It included no sexual or procreative desire, though naturally in Incarnates the difference of sex altered the emotion, since ‘sex’ is held by the Eldar to belong also to the fëa and not solely to the hröa, and is therefore not wholly included in procreation. Such persons were often called melotorni ‘love brothers’ and meletheldi ‘love-sisters’.”

However, as you can guess, these screenshots lack context. They are actually part of a footnote in the book that provides clarification on the meaning of love in a passage discussing Elvish marriage.

The passage reads, “The Quendi differed, however, from Men in the following important aspects, if we speak only of them in the earlier ages of their life in Arda. Individuals were more variable, so that the ages defined above (of 20, 60, 90) are only general and approximate. After maturity (at about 20) their minds and wills had far more control over the events of the body and over the direction of the uses, and the serial ordering of the uses, of the body’s powers and functions. For instance, after maturity one of the Quendi could marry and at once enter into the ‘Time of the Children’. But they could postpone marriage; or within marriage postpone the ‘Time of the Children’. Either because they were otherwise occupied in pursuits that absorbed them; or because they had not found a ‘desired spouse’ (or as Men say ‘fallen in love’); or for reasons of prudence or necessity imposed by circumstances, as in times of trouble, wandering, and exile.” 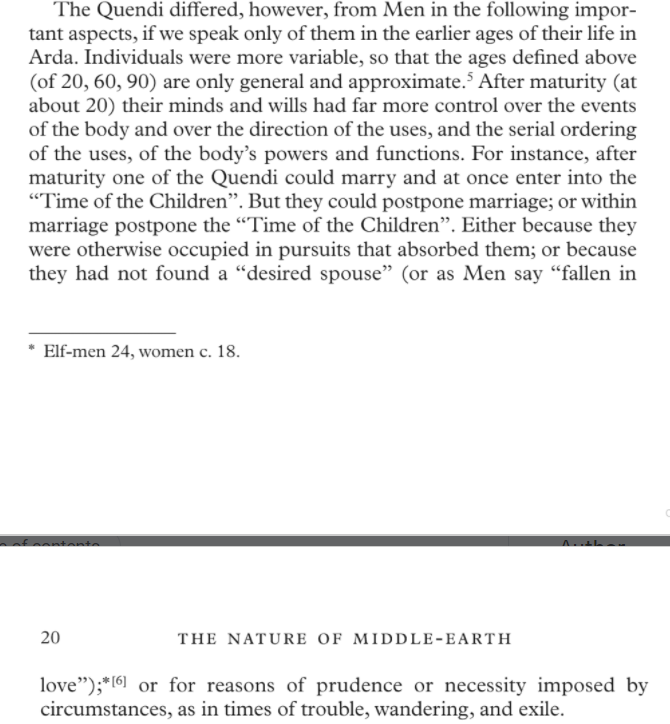 Source: The Nature of Middle-earth

In order to clarify this passage the footnote begins with the excerpt shown in the tweets above. However, there is much more information provided that clearly differentiates √mel and √yer.

The next paragraph in the book reads, “The ‘desire’ for marriage and bodily union was represented by √yer, but this never in the uncorrupted occurred without ‘love’ √mel, nor without the desire for children. This element was therefore seldom used except to describe occasions of its dominance in the process of courting and marriage. The feelings of lovers desiring marriage, and of husband and wife, were usually described by √mel. This ‘love’ remained, of course, permanent after the satisfaction of √yer in the ‘Time of the Children’; but was strengthened by this satisfaction and the memory of it to a normally unbreakable bond (of feeling, not here to speak of ‘law’).

Source: The Nature of Middle-earth

Clearly, √mel and √yer are differentiated.

For further clarification, the definition of Mel in The Lost Road and Other Writings, edited by Christopher Tolkien, is “love (as friend).”

Source: The Lost Road and Other Writings

The editor of  The Nature of Middle-earth Carl F. Hostetter would also rebuke the idea that the excerpt refers to same sex love.

In a thread on Reddit in the LOTR on Prime subreddit, user TransHumanAngel shared a screenshot of the aforementioned excerpt claiming, “Melotorni – ‘love brothers’. Same sex love in adaptation. From the Nature of Middle-earth.”

Hostetter responded to the thread writing, “Nowhere does Tolkien ascribe the meaning ‘romance” to √mel. He specifically excludes sexuality from its meaning. He says that Men might call √mel ‘friendship’, but that it was felt with “greater strength and warmth and permanency” than what Men call ‘friendship’. As such, √mel seems closer in meaning to ‘devotion’ and ‘dedication’ than to mere ‘friendship’. (Think of Sam and Frodo.) But again, it has nothing at all to do with either romance or sexual desire.”

Hostetter would provide further clarification in the thread responding to various users.

To one he wrote, “‘Nobody said it was used for sexual desire’ — Yes, many have. Just search for ‘homosexual’ in this thread.”

He added, “The devotion that married couples feel for each other can indeed be felt by men and by women for each other. We ourselves experience this in familial bonds, which can be extended to non-family members. It has nothing at all to do with either sex or romance.”

In a response to another user he wrote, “It’s more complicated than that. He also says that “The ‘desire’ for marriage and bodily union was represented by √yer; but this never in the uncorrupted occurred without ‘love’ √mel …. This element [√yer] was therefore seldom used except to describe occasions of its dominance in the process of courting and marriage. The feelings of lovers desiring marriage, and of husband and wife, were usually described by √mel. This ‘love’ remained, of course, permanent after the satisfaction of √yer in the “Time of the Children”; but was strengthened by this satisfaction and the memory of it to a normally unbreakable bond….”

He continued, “So, √mel, which “Men might call “friendship” (but for the greater strength and warmth and permanency with which it was felt by the Quendi)” is felt, in addition to √yer, by those desiring marriage and bodily union: √yer is always accompanied by √mel, but √mel is _not_ √yer. √mel is however _strengthened_ by the satisfaction of √yer; so the √mel felt by a married couple after the Time of the Children is not the same as before, and thus not the same as that felt among _melotorni_ and _meletheldi_.”

He followed that up writing, “In short, it seems to me that √yer is the desire for bodily union, while √mel is the devotion that those experiencing √yer likewise feel for each other, and feel in still more strengthened form after the Time of the Children; as well as the devotion felt by _melotorni_ and _meletheldi_.”

On top of all of this, in Letter 142 to Father Robert Murray, Tolkien wrote, “The Lord of the Rings is of course a fundamentally religious and Catholic work; unconsciously so at first, but consciously in the revision.”

The Catholic Church’s teaching on homosexuality is quite clear in the Catechism of the Catholic Church. It reads, “Homosexuality refers to relations between men or between women who experience an exclusive or predominant sexual attraction toward persons of the same sex. It has taken a great variety of forms through the centuries and in different cultures. Its psychological genesis remains largely unexplained. Basing itself on Sacred Scripture, which presents homosexual acts as acts of grave depravity,140 tradition has always declared that “homosexual acts are intrinsically disordered.”141 They are contrary to the natural law. They close the sexual act to the gift of life. They do not proceed from a genuine affective and sexual complementarity. Under no circumstances can they be approved.”

The Catechism continues, “The number of men and women who have deep-seated homosexual tendencies is not negligible. This inclination, which is objectively disordered, constitutes for most of them a trial. They must be accepted with respect, compassion, and sensitivity. Every sign of unjust discrimination in their regard should be avoided. These persons are called to fulfill God’s will in their lives and, if they are Christians, to unite to the sacrifice of the Lord’s Cross the difficulties they may encounter from their condition.”

“Homosexual persons are called to chastity. By the virtues of self-mastery that teach them inner freedom, at times by the support of disinterested friendship, by prayer and sacramental grace, they can and should gradually and resolutely approach Christian perfection,” it concludes.

What do you make of TheOneRing.net’s antics and their attempt to push an easily disprovable gay Elves theory?