Former Congressional candidate Brianna Wu is set to helm a new project based on Gamergate, which she audaciously claims will “show how the tactics of Gamergate were the same ones that led to tragedies like Christchurch and January 6th.” 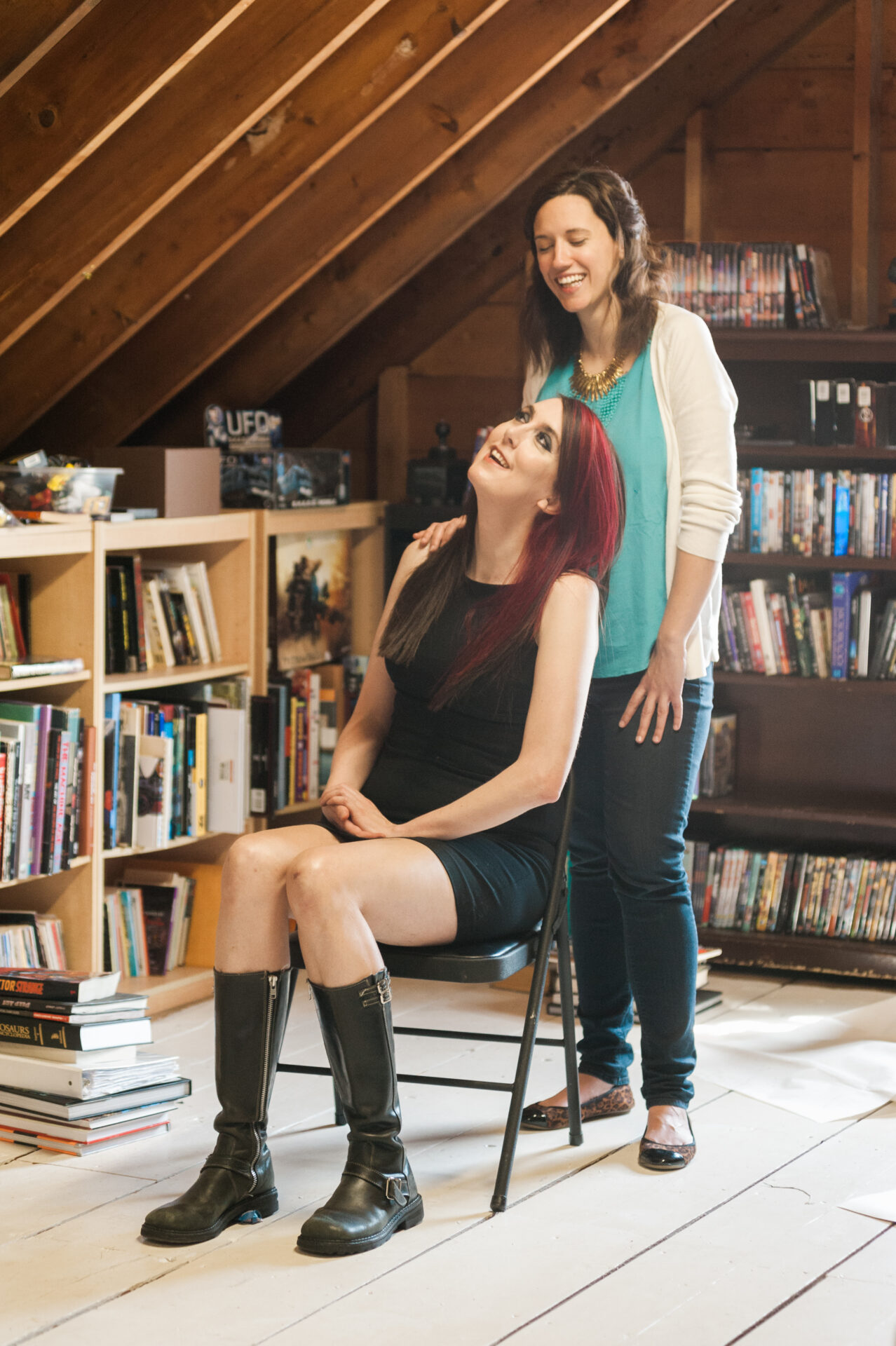 Developed by Wu in collaboration with Mind Riot Entertainment, a fledgling production company whose only industry presence appears to be the very announcement of this project, the Gamergate series will reportedly “explore the origins of the widespread intimidation campaign from the perspective of multiple, fictional people in the game industry – from executives to journalists and indie developers.”

According to Deadline, who announced the project in an October 4th exclusive, Wu will co-write the series with co-creator J. Brad Wilke (Camel Spiders), while Mind Riot Entertainment’s Jonathan Keasey (Give Me Shelter) and Jeremy J. Dodd (One Nation Under Earl) are currently attached to produce. 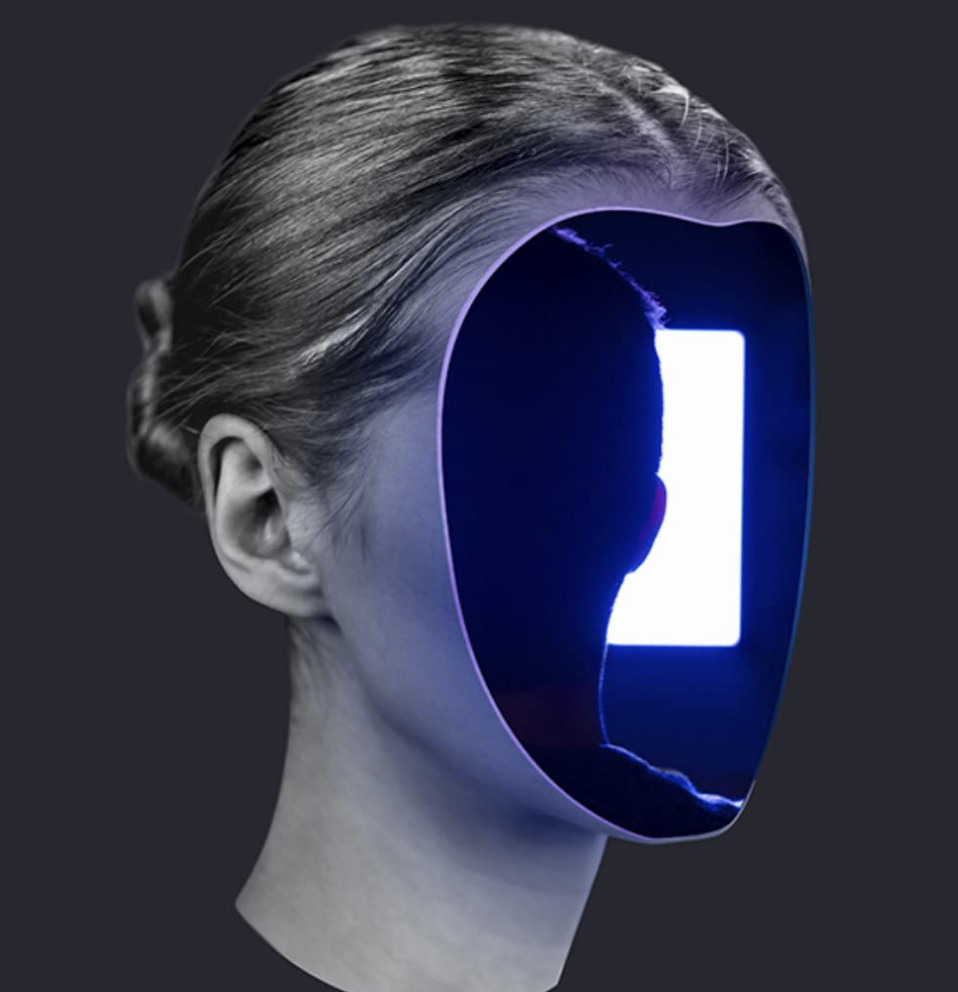 Speaking to the trade news outlet, Wu asserted that rather than “retread the same story told in thousands of news stories from outlets such as the New York Times and Washington Post, plus multiple documentaries like GTFO,” her series would “focus on new, fictional people within the industry reacting to a horrific situation.”

“By explaining how they were unable to stop the video game industry from being hijacked by the lunatic fringe – we can show how the tactics of Gamergate were the same ones that led to tragedies like Christchurch and January 6th,” she added.

In turn, Keasey beamed to Deadline about how “working with Brianna is a huge score for [Mind Riot Entertainment],” explaining that, being “based in Seattle, one of the country’s meccas for gaming, we’ve been wanting to shed light on this subject matter for a while and are honored that Brianna will be co-writing the series alongside Brad.” 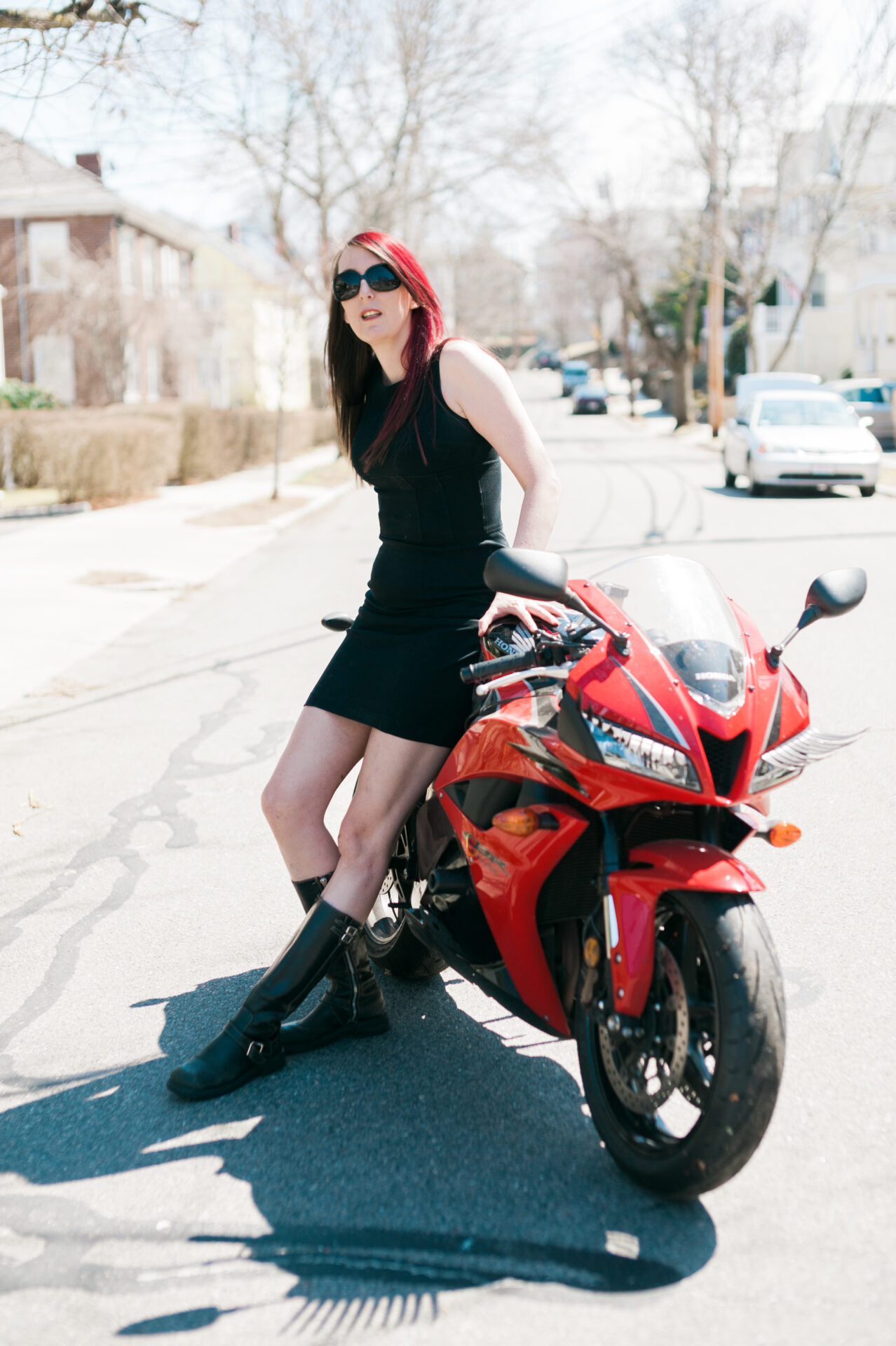 Following Deadline’s announcement, Wu, desperately hoping to assure audiences that “this is a series that won’t be a train wreck like the Law and Order episode,” took to her personal Twitter account to share the series’ pitch with her followers. 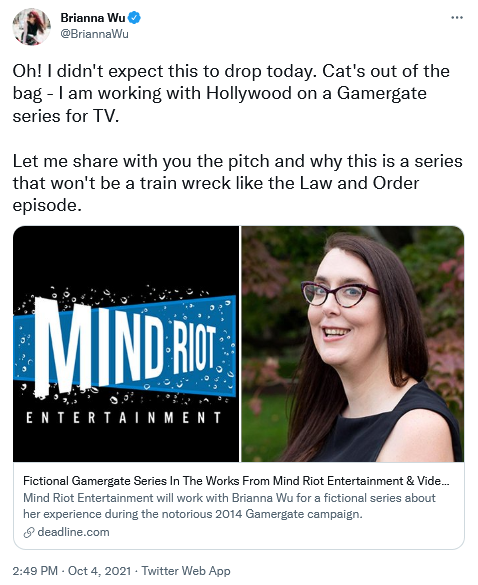 “Gamergate is NOT going to be a feminist melodrama about death threats,” she explained. “It’s fiction, is going to take place in the industry, and is going to be about the efforts of an institution to stop an extremist fringe from taking it over and how it fails. KIND OF RELEVANT, RIGHT?” 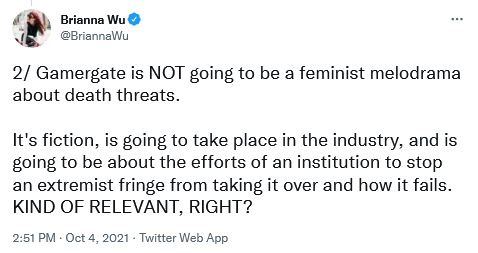 “It’s overwhelmingly fictional characters,” Wu continued. “Some public figures get mentioned, but the characters are journalists, CEOs, developers, and law enforcement. Because the only way to tell the truth about what happened is to make it fiction.”

She then asserted that “One of my rules in writing it is, ‘No stereotypes,’” and subsequently promised, “We’re not going to treat gamers or the game industry with disrespect. In fact, it’s going to celebrate what I love – but also note how powerless we all feel with an increasingly radical fringe in the fanbase.”

“To be honest, I feel a lot of pressure cowriting this. It’s my goal to represent what women in our field face, but with nuance and compassion,” she wrote in conclusion to her thoughts. “You can trust me to tell a more true story about game development than has been told before.”

Notably, this drama-based project has no relation to the previously announced, ‘Pitch Perfect’-esque Gamergate comedy film set to be written by Julia Yorks and star Elliot Page, which Wu herself previously criticized for “turning the worst event of her life into a comedy.” 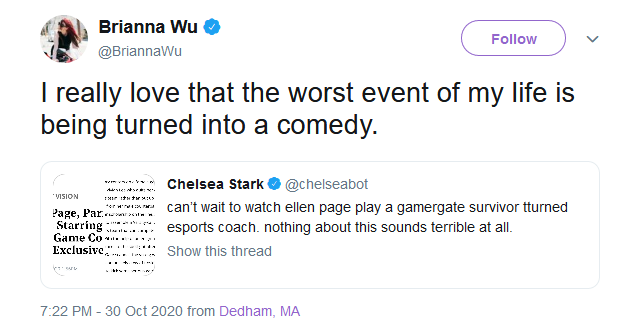 What do you make of Wu’s new Gamergate project? Let us know your thoughts on social media or in the comments down below!