Hollywood actor Jim Caviezel, widely known for his portrayal as Jesus in Mel Gibson’s The Passion of the Christ, has been getting quite a bit of backlash from woke social justice warriors, after delivering a speech at the For God and Country: Patriot Double Down convention. 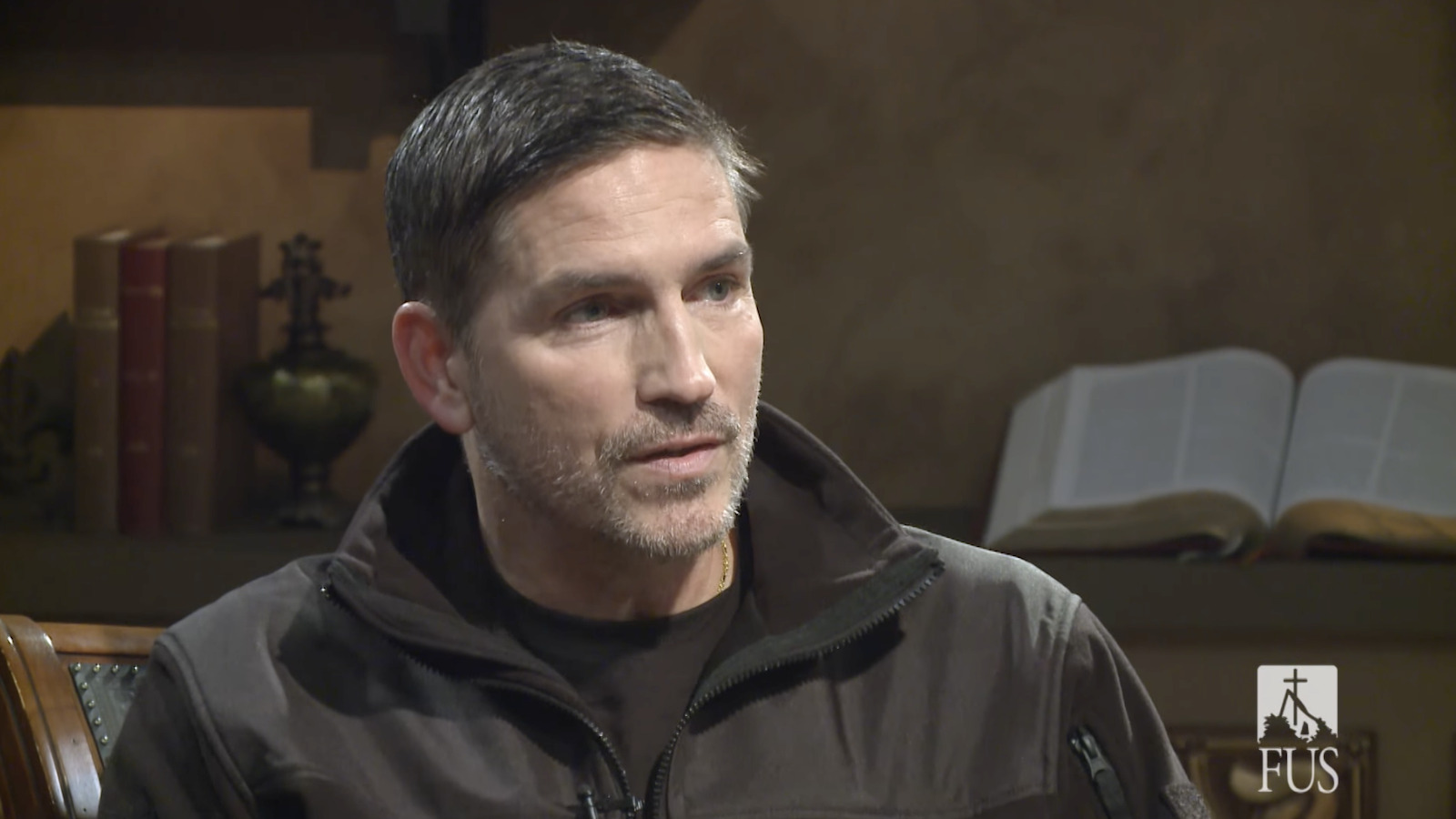 “I see before me a whole army of my countrymen here in defiance of tyranny. You’ve come to fight as free men. And free men you are. What will you do without freedom? Will you fight? This man says, ‘No, we’ll run and we’ll live.’ Fight, and you may die. Run, and you’ll live — for at least a while,” Caviezel said, quoting Mel Gibson’s speech in Braveheart.

He continued, “And dying in your beds, many years from now, would you be willing to trade all the days, from this day to that, for one chance, just one chance, to come back here and tell our enemies that you can take our lives, but you can never take our freedom.”

“Every man dies, not every man truly lives. We must fight for that authentic freedom and live, my friends, by God we must live,” the actor added. “And with the Holy Spirit as your Shield and Christ as your sword, may you join St. Michael and all the angels in defending God, and sending Lucifer and his henchman straight right back to Hell where they belong.”

“We are headed into the storm of all storms. Yes, the Storm is upon us. But not without Jesus, our rudder. And in the words of [Ronald] Reagan, ‘Evil is powerless if the good are unafraid.’ God bless you,” Caviezel concluded his speech.

The “tolerant” left was quick to take issue with Caviezel’s speech, taking to social media to criticise him and accuse him of inciting violence.

“People complain that horror movies are evil and damaging, but having watched ‘Passion of the Christ’ star Jim Caviezel go full devil-worshipping QAnon messianic crazy on stage I’m pretty sure that “Christian” movies are more dangerous. Give me Blood Feast over this s**t any day,” wrote BBC critic Mark Kermode.

The Nation’s Justice Correspondent Elie Mystal, who proudly labels himself as “Strong Against: Republicans,” wrote an exchange between him and the Universe, claiming that he had “Jim Caviezel is a complete nutter” on a Bingo game. 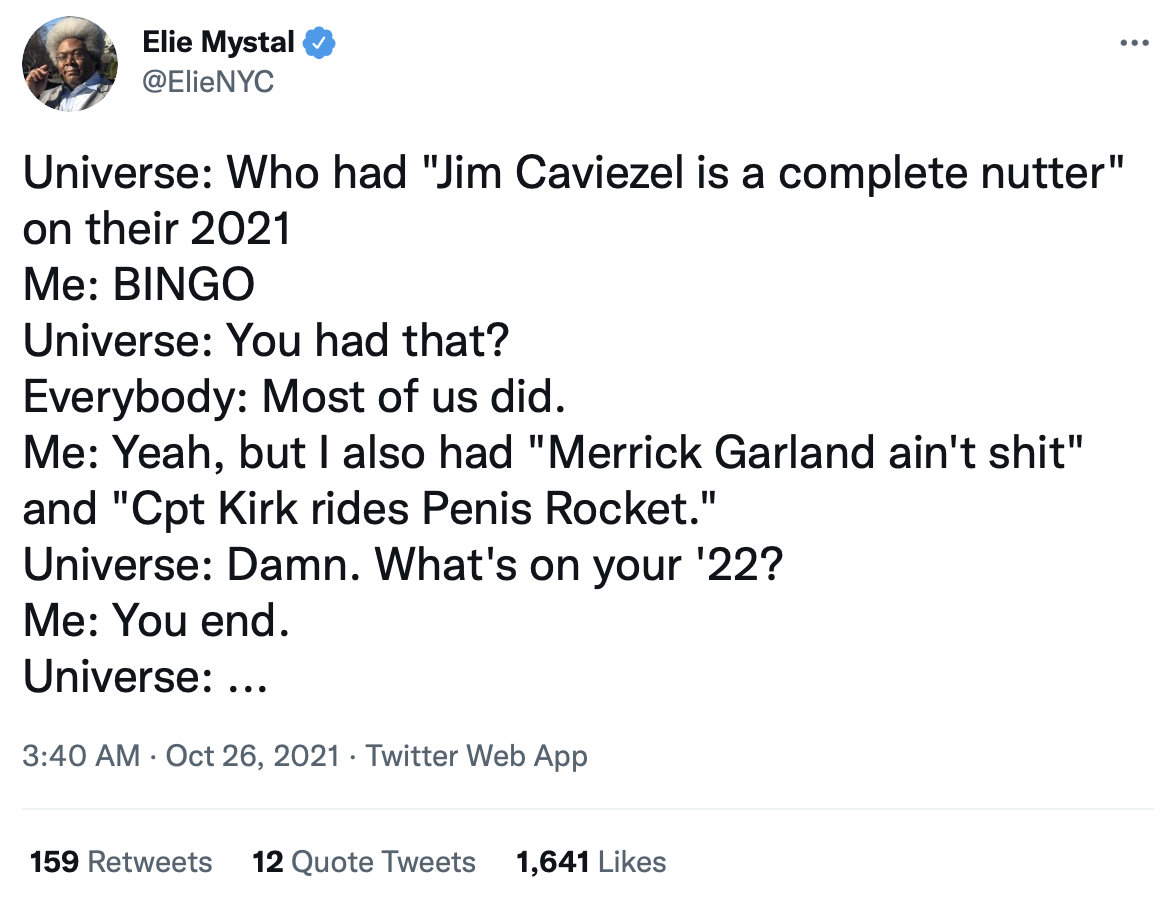 The West Wing actor Bradley Whitford also took to social media to share his frustration with Caviezel’s speech, writing, “Another example of the fact that the only religious voices we hear are voices of condemnation and exclusion.”

“Caviezal embodies the Right’s perverse weaponization of the inversion of the values of Jesus Christ. There is no love in it. Only hatred and the threat of violence,” wrote the insufferably woke actor. 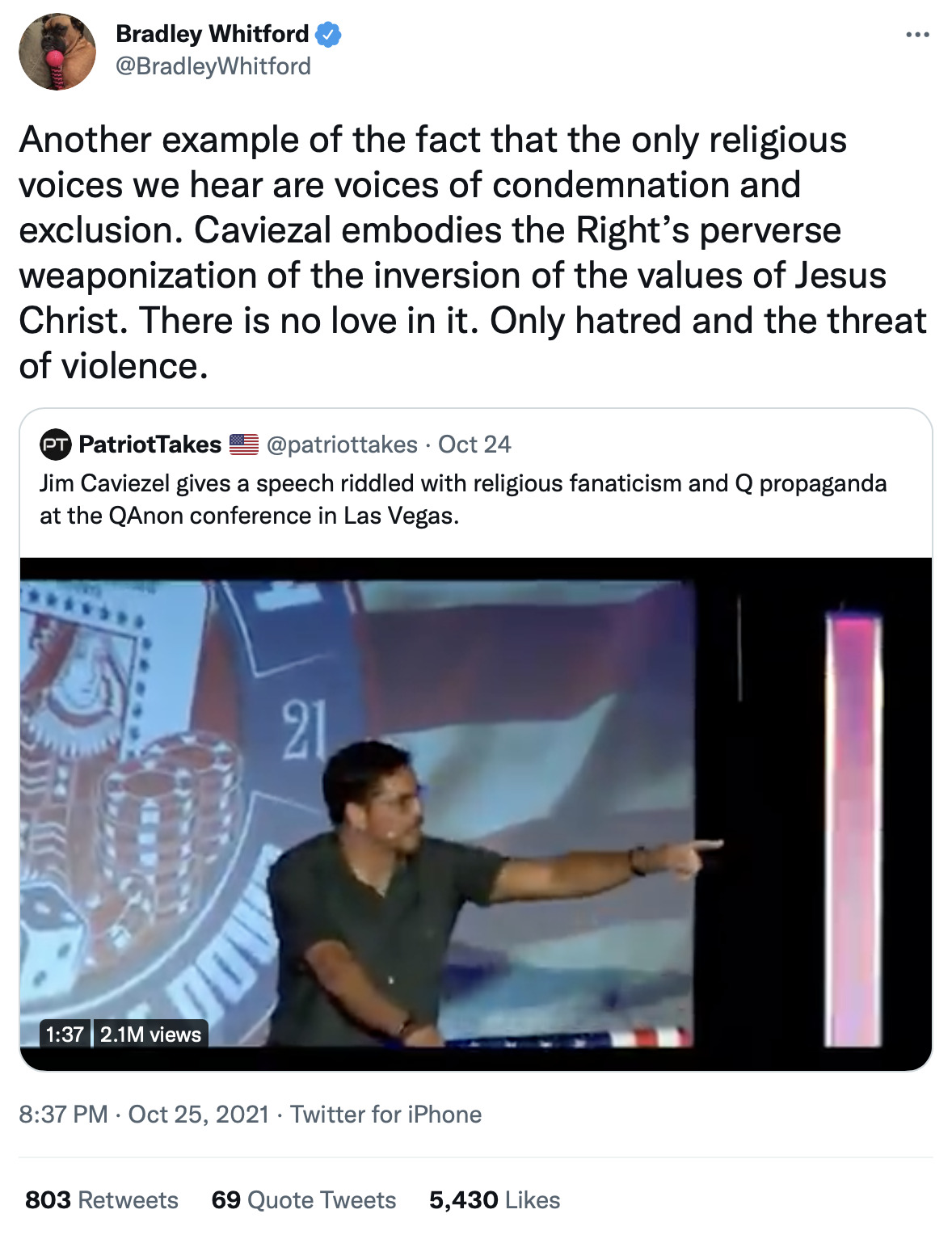 He added, “Instead, it’s an example of a large-scale ‘spiritual warfare’ delusion that predates QAnon by decades & is believed by millions more.” 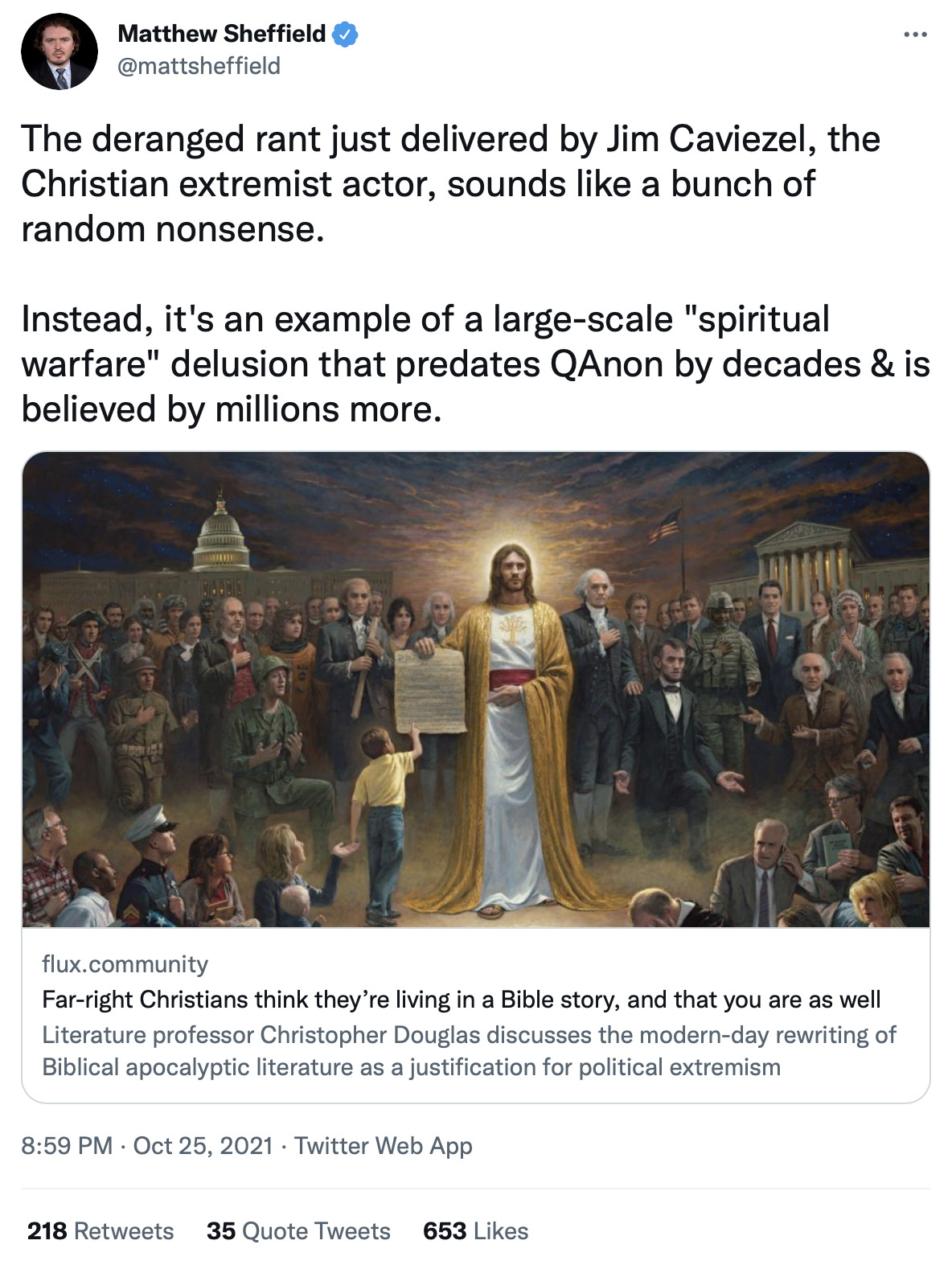 Former professional tennis player Martina Navratilova asks, “Is Jim Caviezel a preacher now or something? Jesus is both his sword and his Rudder. I am confused. And I will not be watching anything with him in it again- come to think of it he always gave me the creeps..” 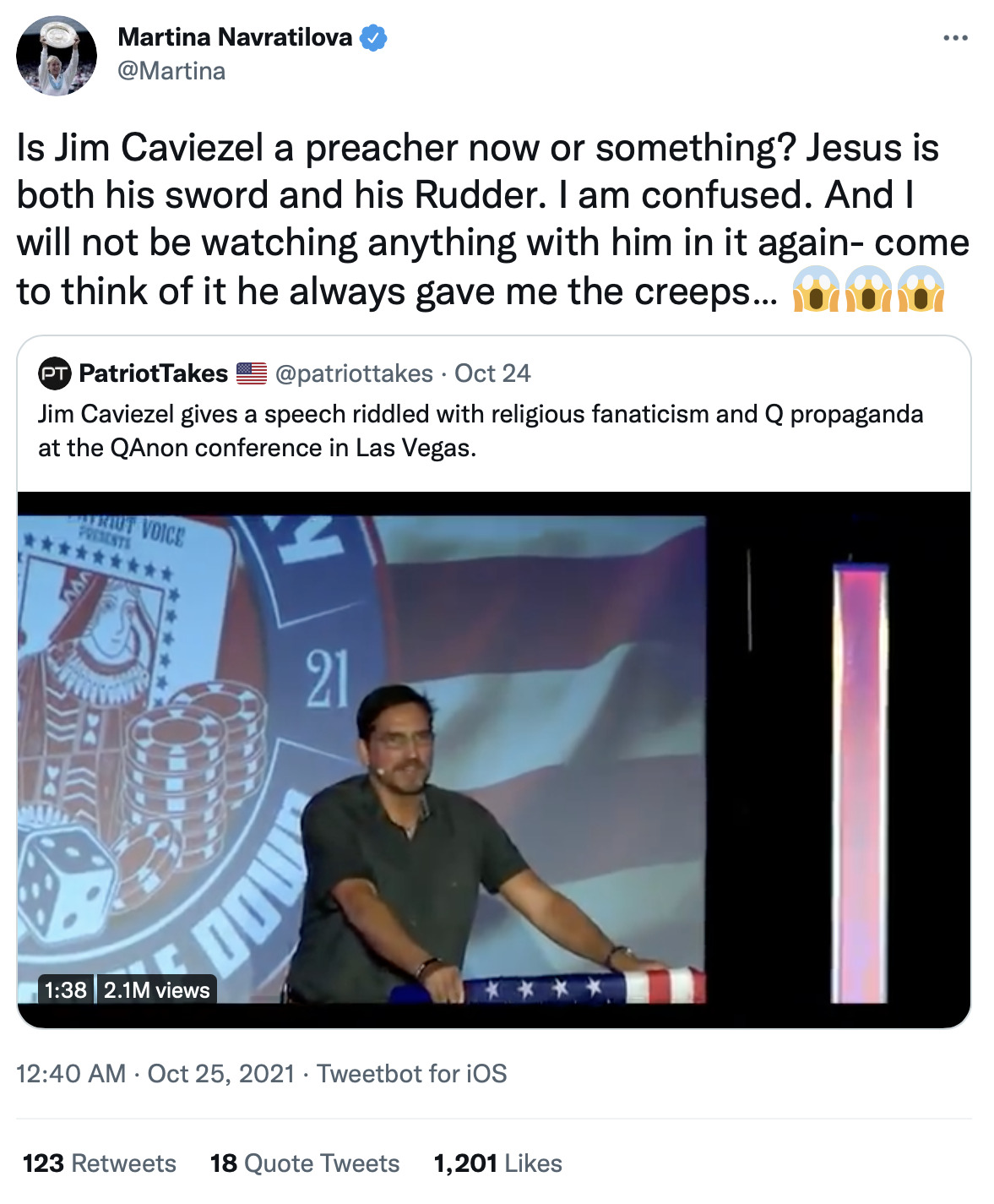 Woke actor Kirk Acevedo, who starred alongside Jim Caviezel  in The Thin Red Line, claims that The Passion actor’s words are “dangerous and filled with hate.”

“Jim Caviezel,” writes Acevedo, adding, ” Can we be so different after all these years? We jogged together, we played basketball together, we worked together in Film & TV.”

He continues, “NOW I’m a henchman in Lucifers Army? Your words are dangerous & filled with hate. What happened my friend?” 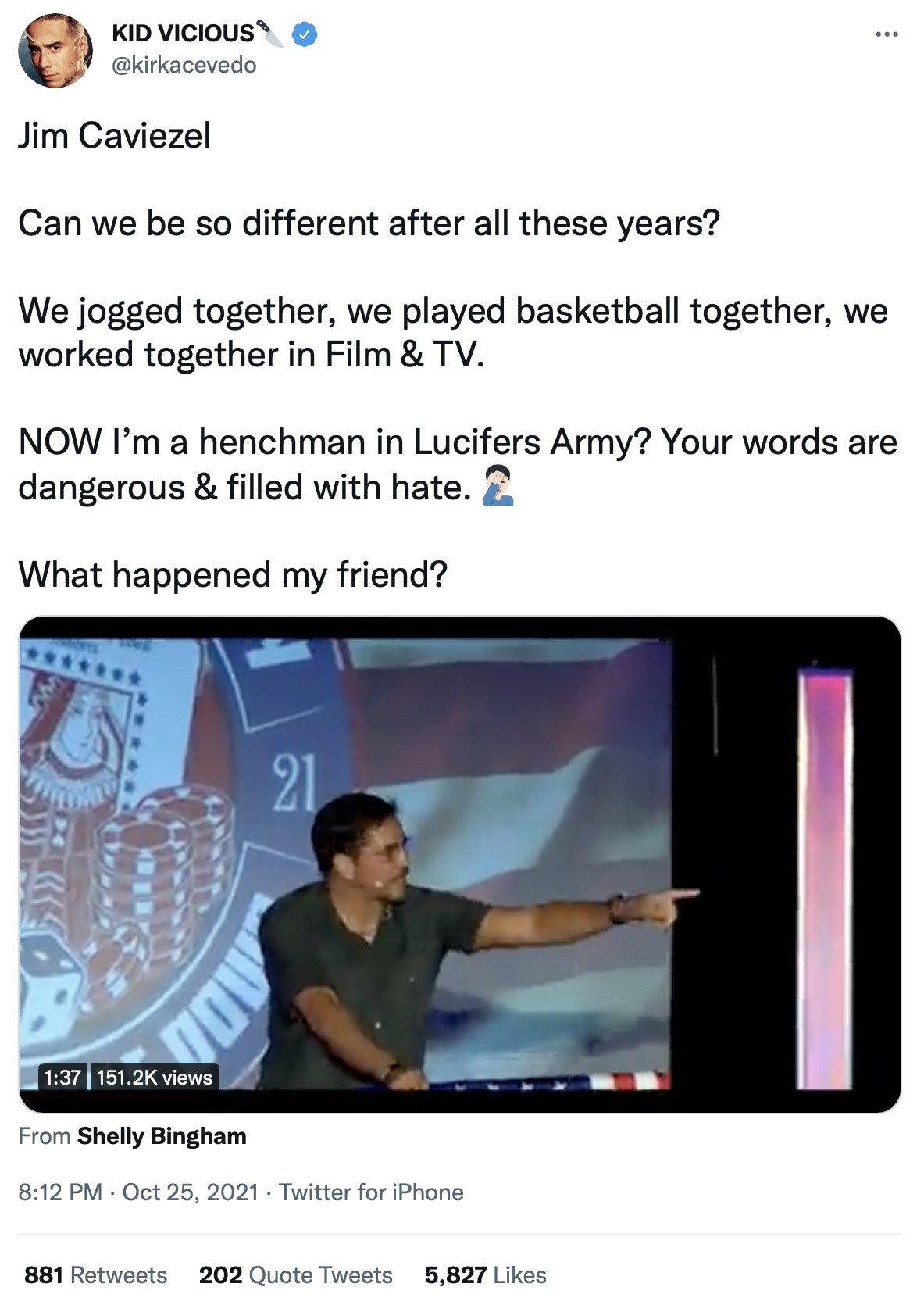 A few others have also taken to social media, only they have shown their full support for Jim Caviezel and the speech the actor delivered at the For God & Country: Patriot Double Down convention.

“Amen. Jim Caviezel is on fire,” wrote conservative author Melissa Tate echoing Caviezel’s sentiment and adding, “We are in an epic battle for our freedom. Evil will not prevail.” 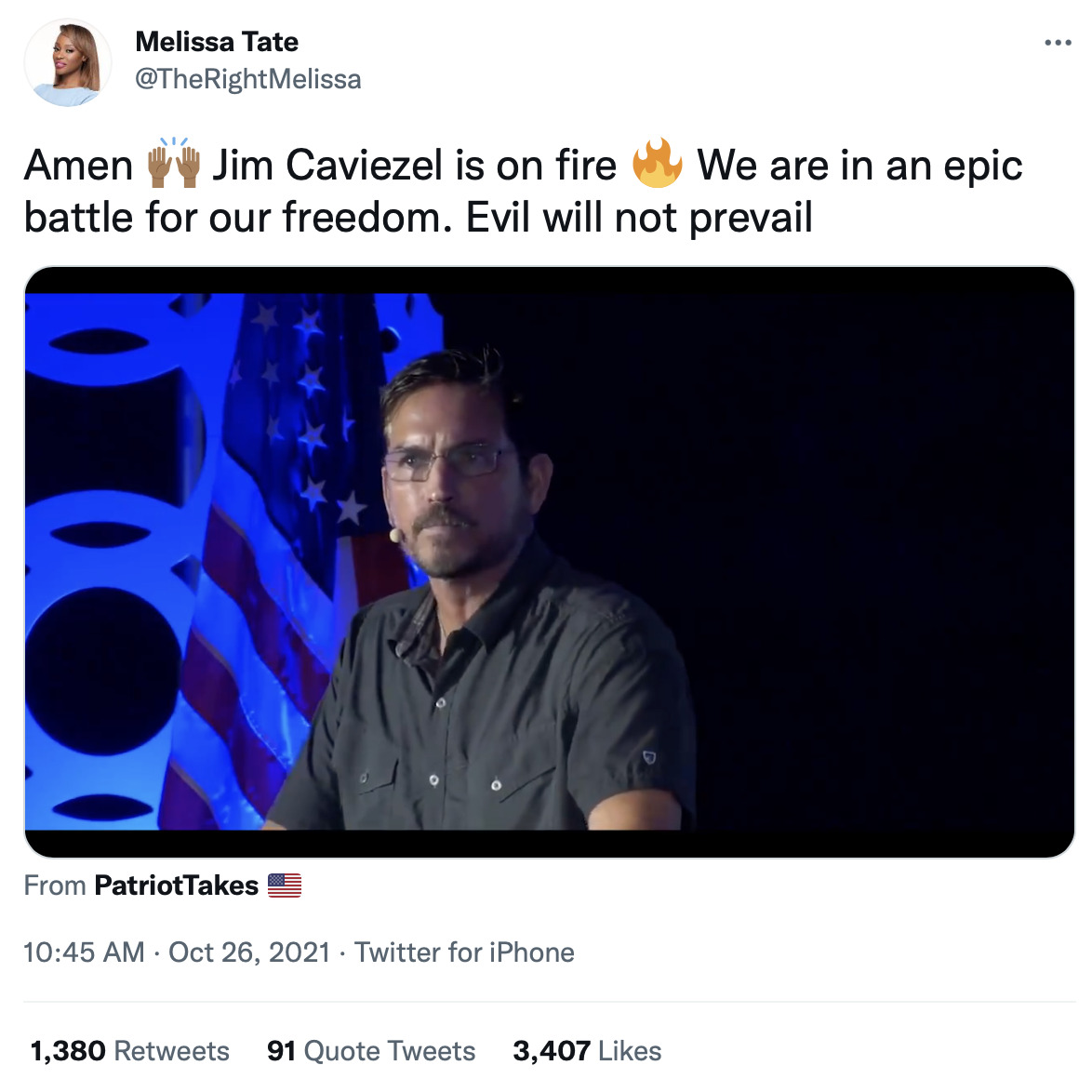 Anti abortion organisation Live Action also threw their support behind the actor when he was facing backlash for his speech on freedom, tweeting, “Jim Caviezel is right. Abortion is evil,” and they also shared an old quote wherein Caviezel touches on the topic of abortion.

“When the mother herself kills her son she goes against her own nature, against her own instinct. People talk about ‘choice,’ but when a woman does that, when she destroys the life of her unborn child, then we have arrived at the limit. The level cannot go higher regarding evil,” said Caviezel in an interview with LifeSiteNews. 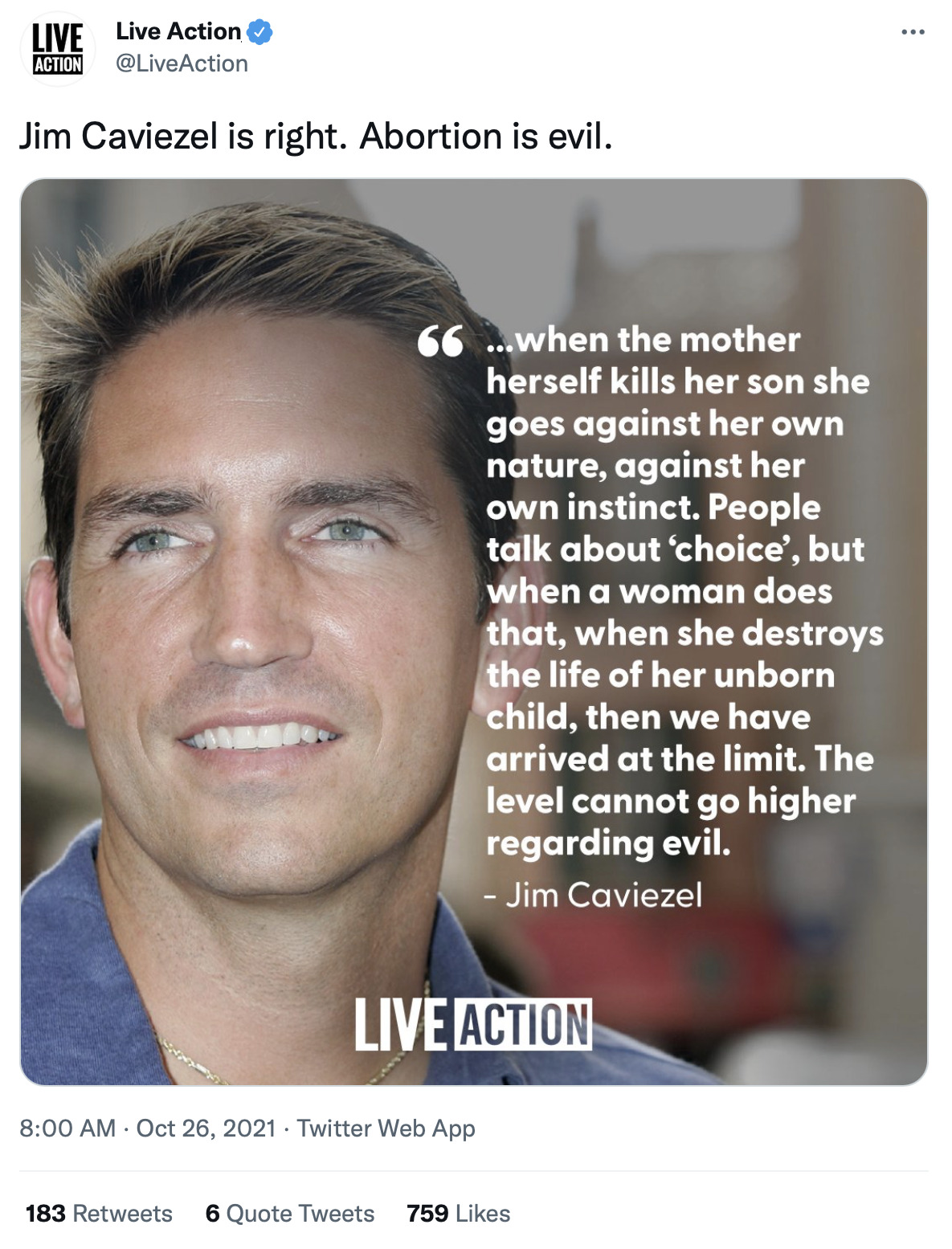 What do you make of Jim Caviezel’s speech? Let us know your thoughts in the comments section down below or on social media.