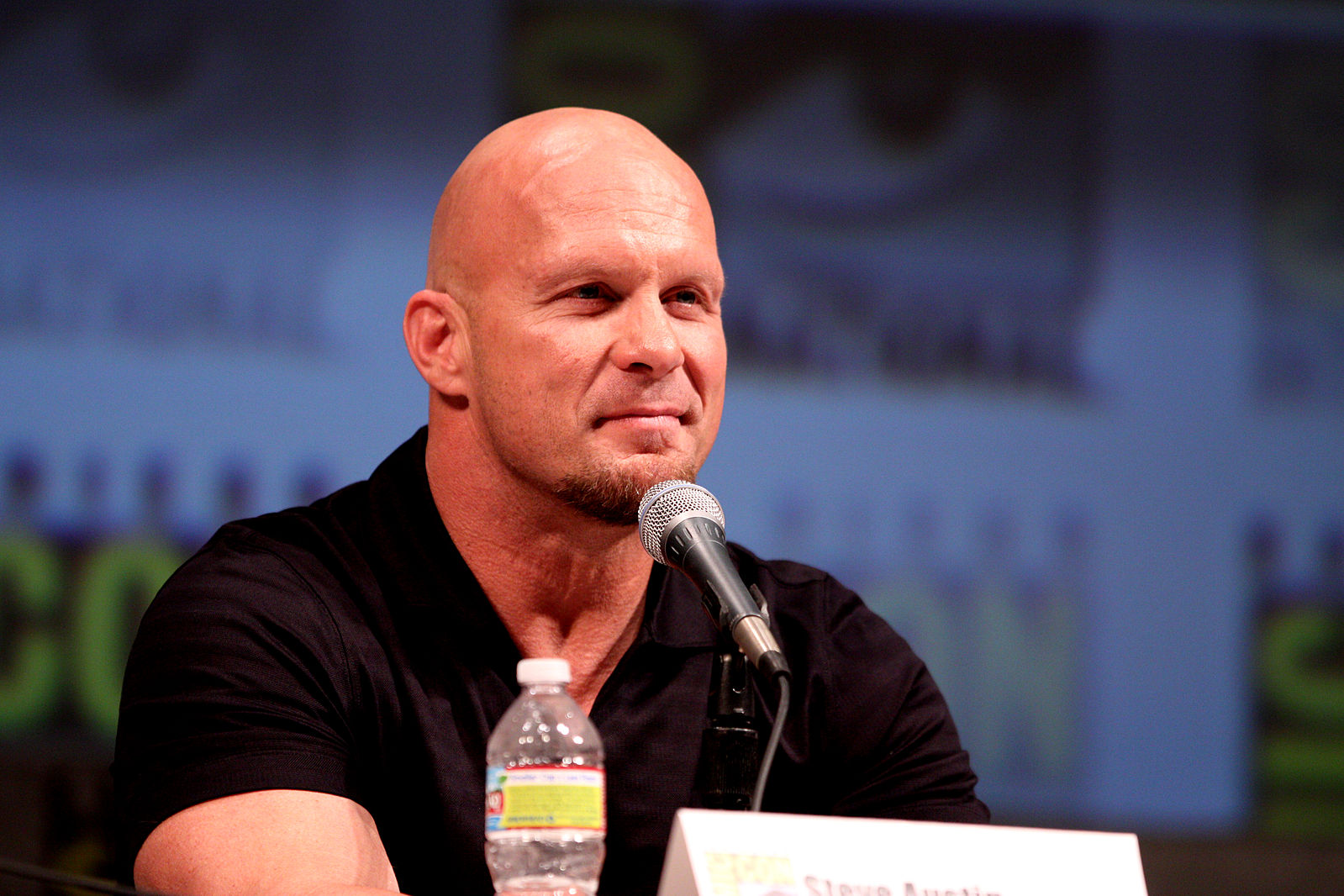 What’s more, the official video was actually taken down from YouTube, with Gray explaining that the platform had “banned ‘Let’s Go Brandon’ song from YouTube due to ‘medical information.'”

“What medical misinformation is in the song?” He asked.

YouTube has banned “Let’s Go Brandon” song from YouTube due to “medical information”. What medical misinformation is in the song? Whoa. pic.twitter.com/W8sCcyH4IM

Gray’s “Let’s Go Brandon” isn’t the only anti-Biden tune to top the Apple Music charts right now, as another anti-Biden tune bearing the same title but produced by Loza Alexander also managed to make the charts twice with its original release and its extended version in 2nd and 7th place, respectively.

On Thursday, Austin retweeted a clip originally posted by Turning Point USA creative officer Benny Johnson, who clipped together some videos of President Biden, Vice President Kamala Harris, and other Democrats which made the politicians appear as if they were dancing to Alexander’s “Let’s Go Brandon” tune.

“This is unfortunate, man. Would hope you’d avoid something so divisive, one way or the other,” wrote user @blanka121282.

Twitter user @HereWeAre1 said they were “disappointed” with Austin’s retweet, stating, “It totally makes sense for an old guy from Texas but I’m still disappointed.”

Sharing The Dark Knight’s iconic “You either die a hero… or you live long enough to see yourself become the villain” line from The Dark Knight Rises, @jimmyjamesinc2 simply wrote, “Shame.” 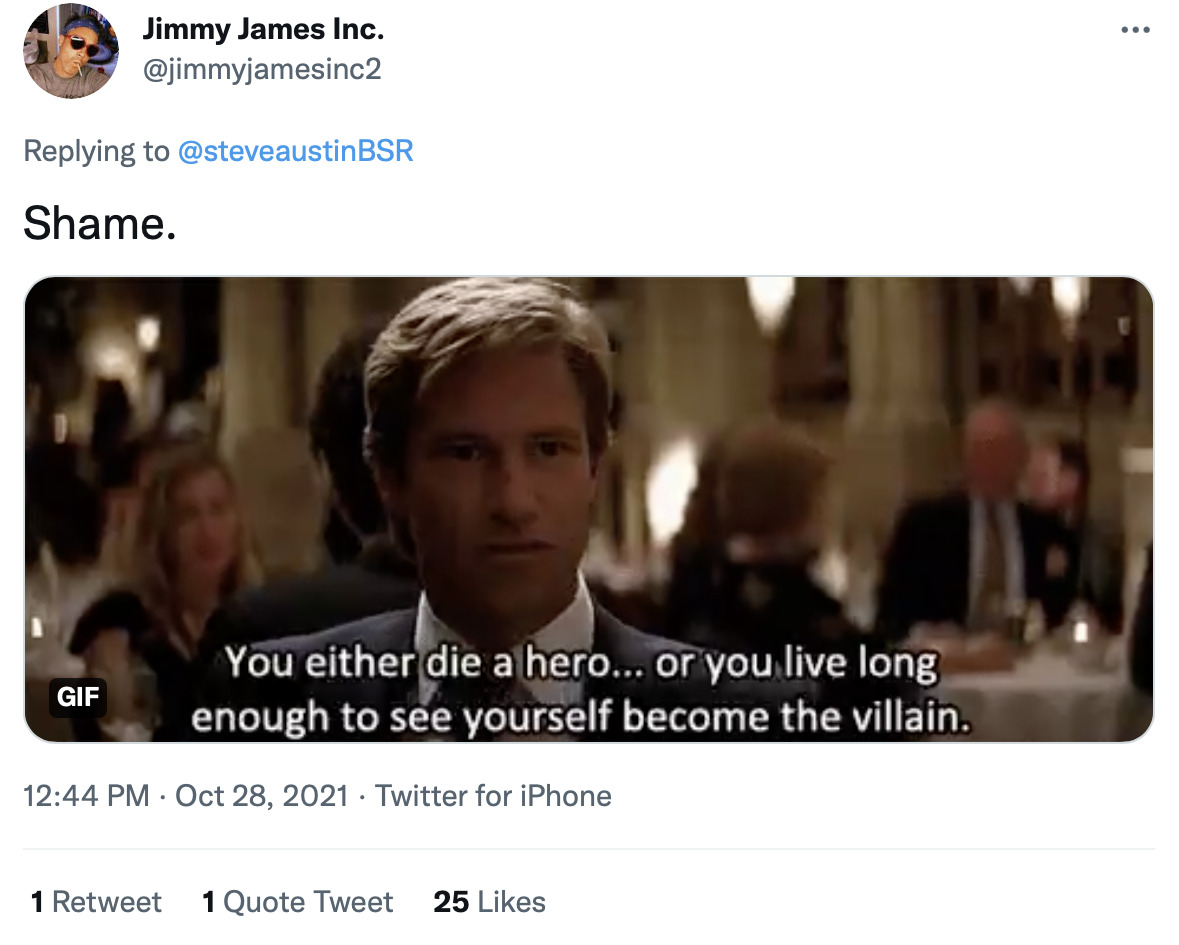 @LessAlex expressed his frustration with an animated gif of Yoda which read, “Disappointed am I.” 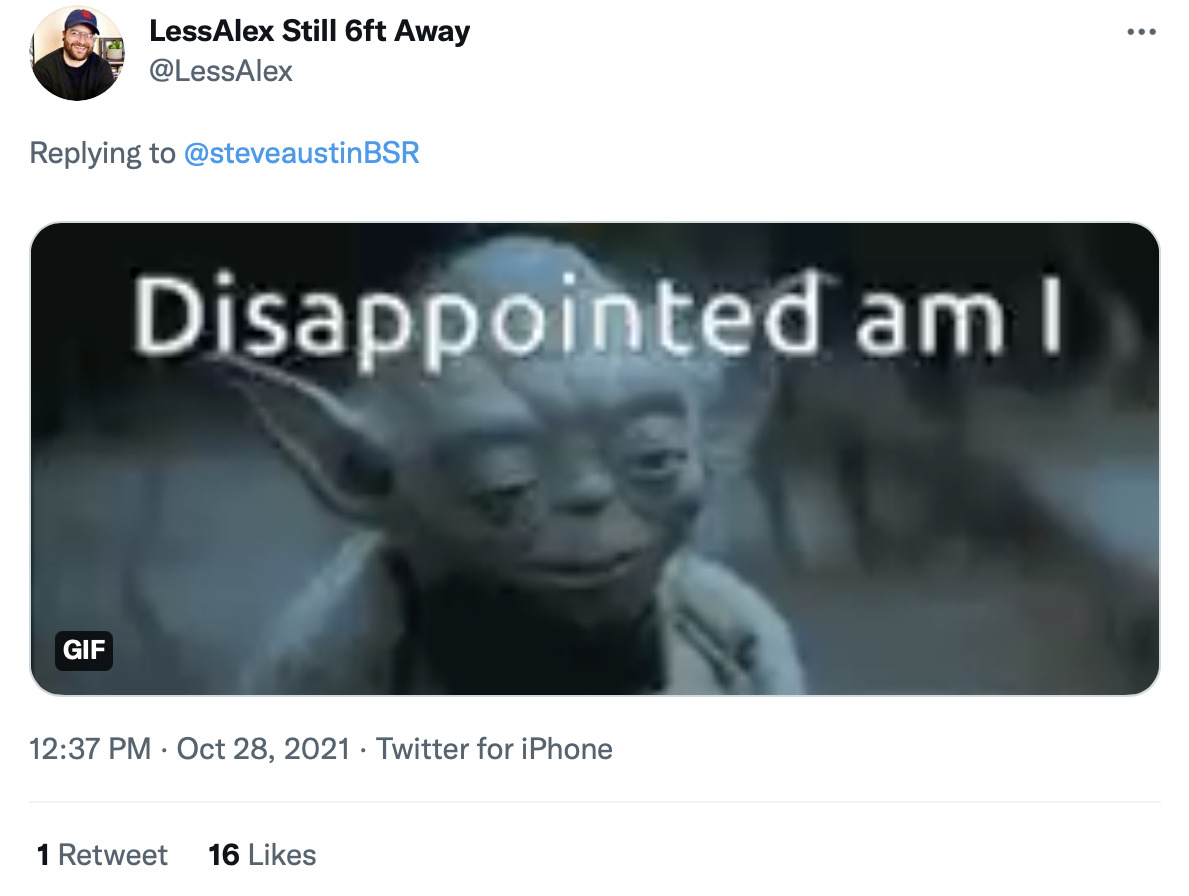 “Anyone surprised hasn’t noticed the people he follows on Twitter,” asserted @TheReal_Peezy, adding, “you will also be disappointed with a few other big name wrestlers.”

A crying emoji was all Twitter user @RustyJimi was able to tweet after having his Jimmies rustled by the “Let’s Go Brandon” clip.

“What do you expect he’s a redneck from Texas,” wrote yet another disgruntled Twitter user who can’t seem to handle a joke.

Twitter user @OSCAR904, who labels himself as an SJW, tweeted, “Always kew you was maga” in reply to Austin.

@notPFTbot wrote, “I’ve seen enough of the guy to know that his best days are behind me.”

“This is less surprising that Jericho being a MAGA man, but it’s still disappointing,” wrote @adamfmartin. “Austin always veered away from overt politics. A shame.”

“Let’s Go Brandon is what happens when the dorks think they’re the funny ones,” wrote @TheMattRasnick.

However, it wasn’t only easily offended users who were drawn to Austin’s tweet.

Unsurprisingly, Austin received a sizeable amount of support from his Twitter followers, many of whom not only cheered on the former pro-wrestler’s retweet of the “Let’s Go Brandon” clip but, also called out those who felt attacked by it.

“The video is hilarious but what’s even better is how certain folks are having an absolute meltdown that you would retweeted this satire,” read a tweet by @juicefreak247, who was not even slightly offended by the clip.

SportsTalk790 host Adam Clanton threw his support behind Austin by writing, “Just when I thought I couldn’t love @steveaustinBSR more…” 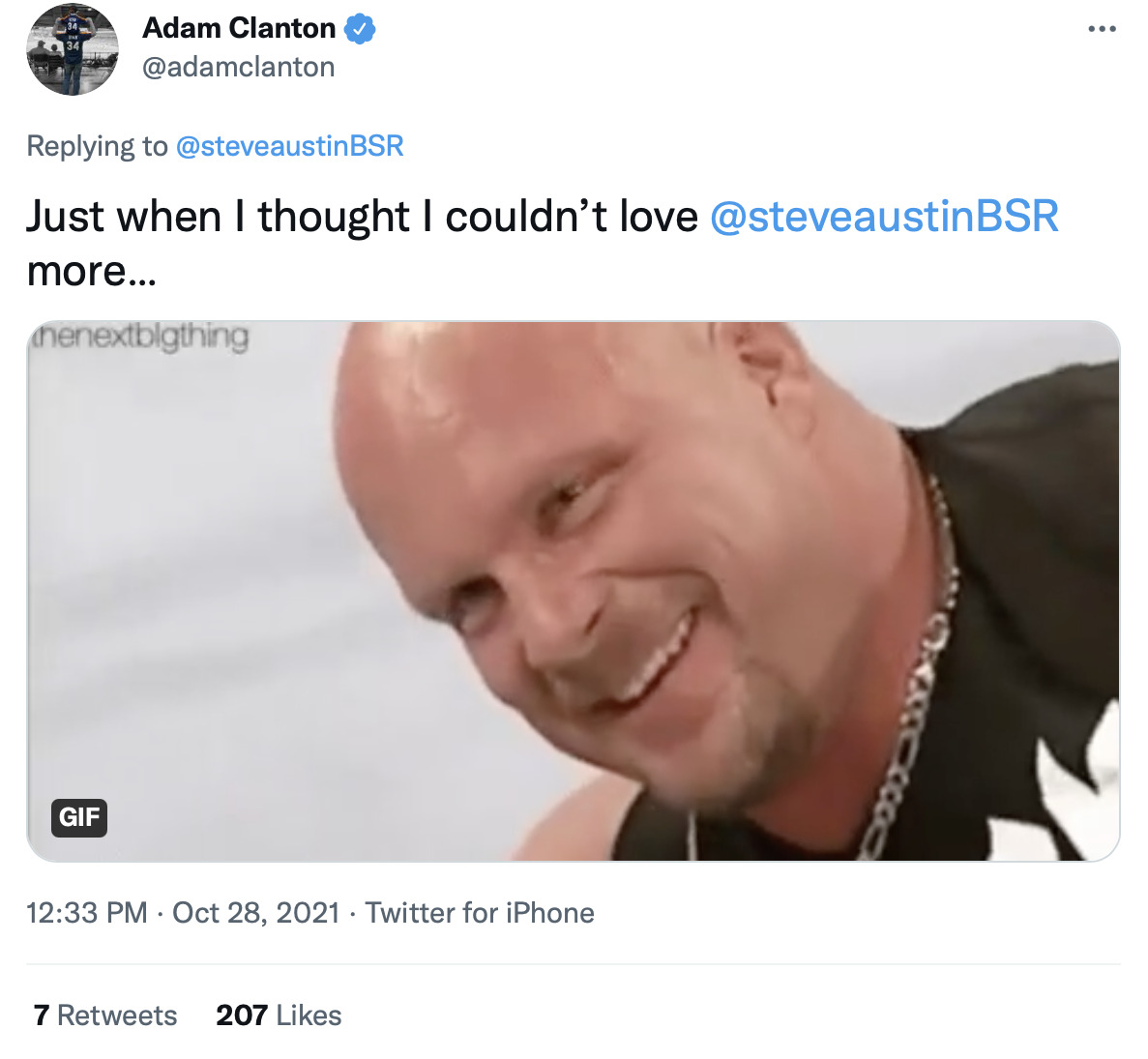 @MarcDL_89 chimed in, writing, “There’s some thin skin in these comments! We’re allowed to laugh at politicians, Jesus!”

Some more common sense was thrown into the mix by @BigBradWolfe, who wrote, “I promise you all, it’s totally ok to still like Steve Austin (or anybody) and not agree with their political preferences.”

Last but not least, there was even a proper reaction from a Biden supporter who actually thought the video was funny and didn’t condemn Austin for sharing it.

“I voted for biden and think this is hilarious,” wrote @coryjuly1988, adding, “some people just can’t take jokes or respect that not everyone has the same view and god forbid if you don’t, then you’re pretty much labeled every negative thing possible and she be canceled and blackballed from life.” 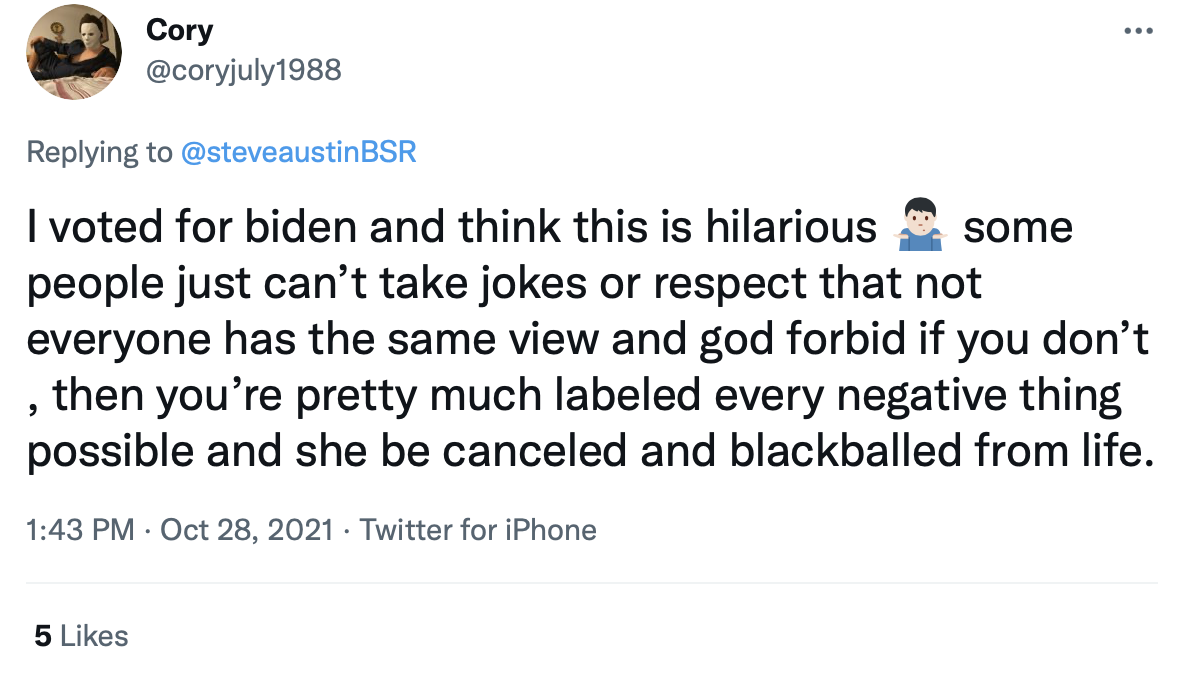 What do you make of Biden supporters throwing a fit over Stone Cold’s retweeting of a Let’s Go Brandon music video? Let us know your thoughts in the comments section down below or on social media.