Writer Kate Leth, whose credits include script work for Crunchyroll’s High Guardian Spice and a single volume of Patsy Walker, A.K.A. Hellcat for Marvel, recently dismissed the rightful criticisms of her ‘Kill All Men’ rhetoric-heavy social media history by not only refusing to apologize, but also blaming critics for not inherently knowing that she was in a “tumblrpilled” state of mind. 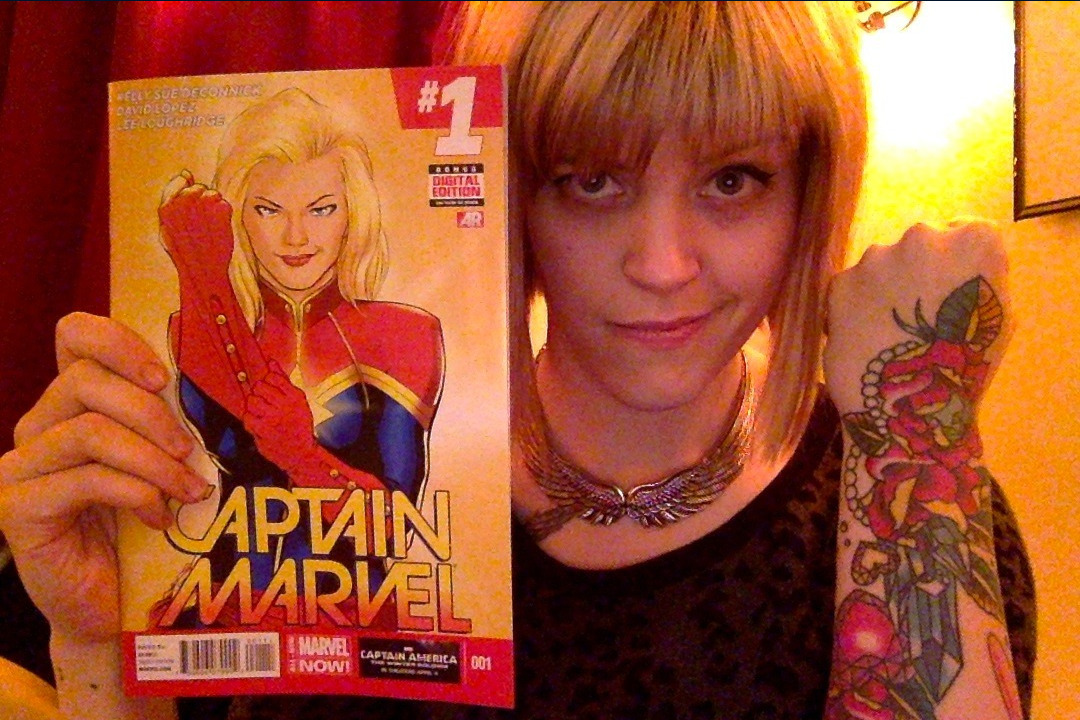 As documented in a well-circulated compilation image, Leth’s Twitter history is filled with numerous misandric posts which serve no purpose other than to insult men and in some cases call for outright violence against their entire gender.

Likewise, on January 1st, 2015, Leth wrote – seemingly apropos of nothing but her general disdain for men – “We’re trying to decide on a slogan for 2015. Torn between ‘why not’ and ‘nothing’s weird’ but my vote’s still for ‘kill all men.’” 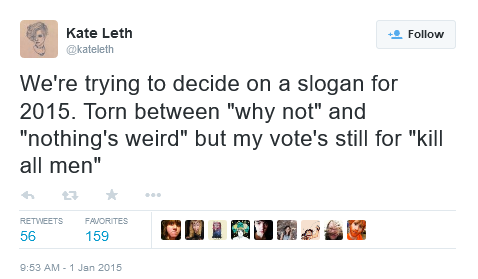 Another such example of her anti-male rhetoric occurred in 2017, when in response to the late Senator John McCain’s return to the US Senate amidst his battle with brain cancer to vote in favor of further discussions regarding the repealing of ‘Obamacare,’ Leth declared, “Men are trash.”

“Sorry for a sweeping generalization but since it’s almost entirely old white men making these decisions,” she added. “I don’t feel bad.”

While Leth’s social media history has had little effect on her professional career, as she has since gone on to write for such companies like Dark Horse (Spell on Wheels), Hasbro (Transformers: Cyberverse), and the aforementioned pair of Crunchyroll and Marvel, it has drawn her the ire of audiences, many of whom – both fans of her works and critics – completely disagree with her proudly declared sexism.

It was this less-than-stellar repertoire with fans – alongside her generally antagonistic social media presence – that led to the above tweets once again making the rounds following the release of High Guardian Spice, the abominable Crunchyroll exclusive on which Leth featured as a series writer. 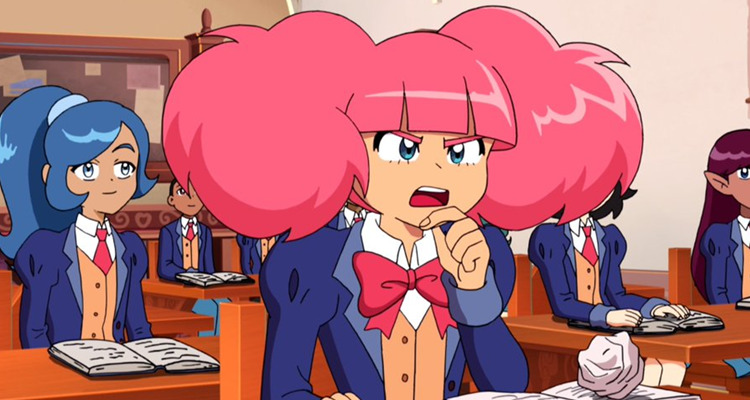 Taking notice of the subsequent wave of recent backlash against her tweets, Leth took to Twitter on November 4th to observe to her followers in a now-deleted thread, “Funny how people who spam my contact form with demands for ‘accountability’ because I worked on a cartoon always use burner emails.”

‘“How dare you say KILL ALL MEN,’” she continued, mocking the renewed criticisms of her social media history. “Well hon those tweets are 8 years old and I was tumblrpilled at the time.”

“If you can’t get that idk what to tell you,” she then dismissively told her critics. “I block people who are dickheads. Also, nothing is ‘my show.’ I have only ever been one person on a writing staff.” 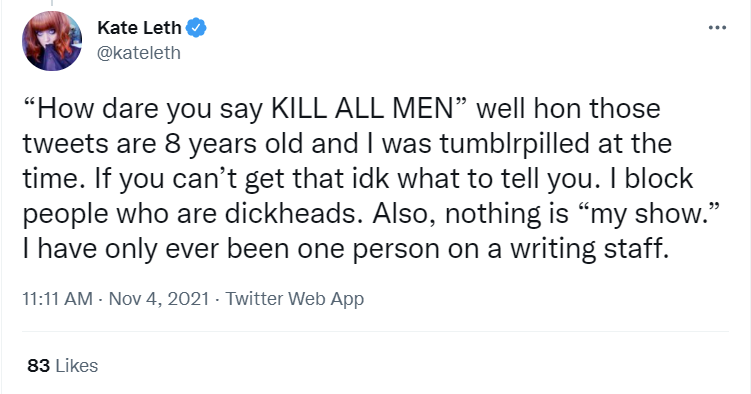 In a follow-up tweet, Leth further explained, “as a writer on a staff I have no power over design, marketing, animation, or larger story arcs/decisions. I do my job, I write my scripts. And I’m proud of the work I do!”

“But I am not the powers that be,” she concluded. “Not on anything that’s out now, anyway. I’m just grateful for the work!”

However, though Leth attempts to explain away her past rhetoric as simply being “tumblrpilled,” one should take note that at no time in her above tweets does Leth apologize for having espoused such hateful sexism.

Instead, she opts to paint her critics as somehow lacking integrity for not understanding – magically, one should note, as Leth has never publicly spoken about these tweets until now – that this was an allegedly former state of mind.

Ultimately, Leth’s tweets read less like taking responsibility, and more like an unreasonable shifting of the blame for her own failings onto her critics.

What do you make of Leth’s response to her history of ‘kill all men’ tweets? Let us know your thoughts on social media or in the comments down below!