Niantic have launched the Dragonspiral Descent event in Pokemon GO, and our guide will tell you how to capture its special spawns, how to use the newly introduced Druddigon, and more! 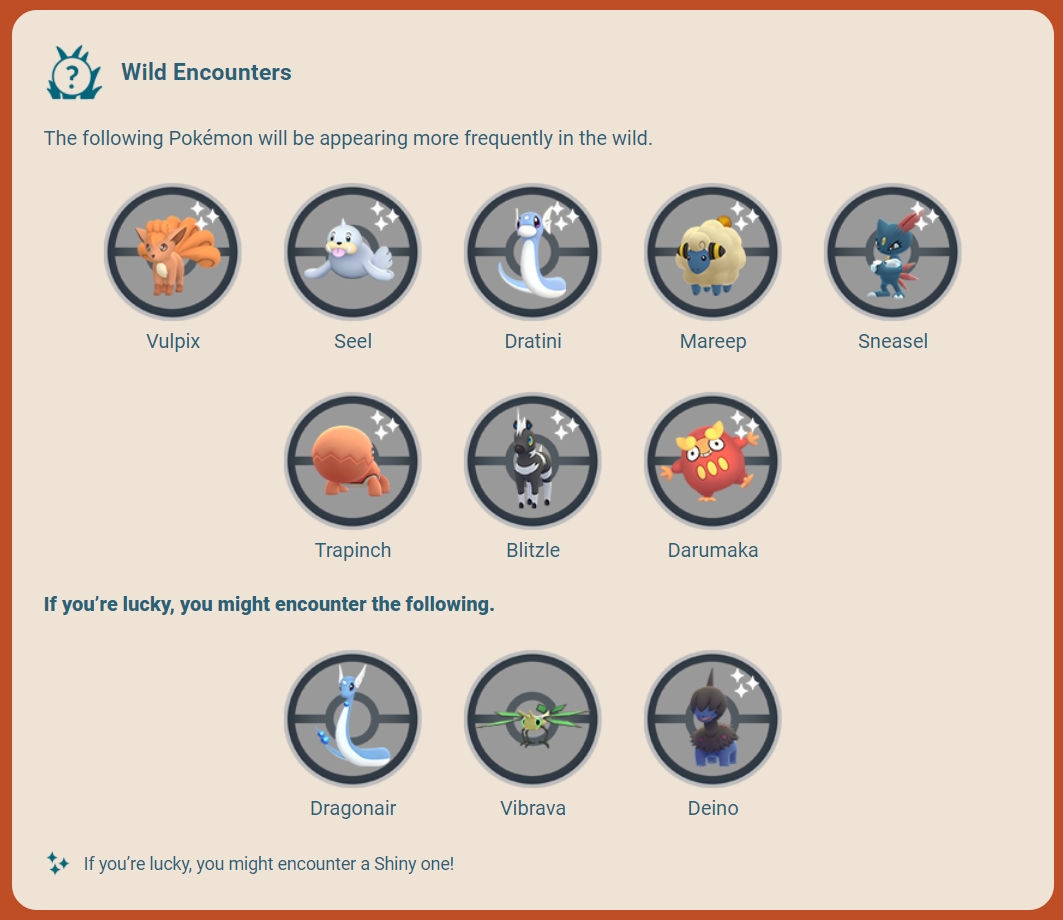 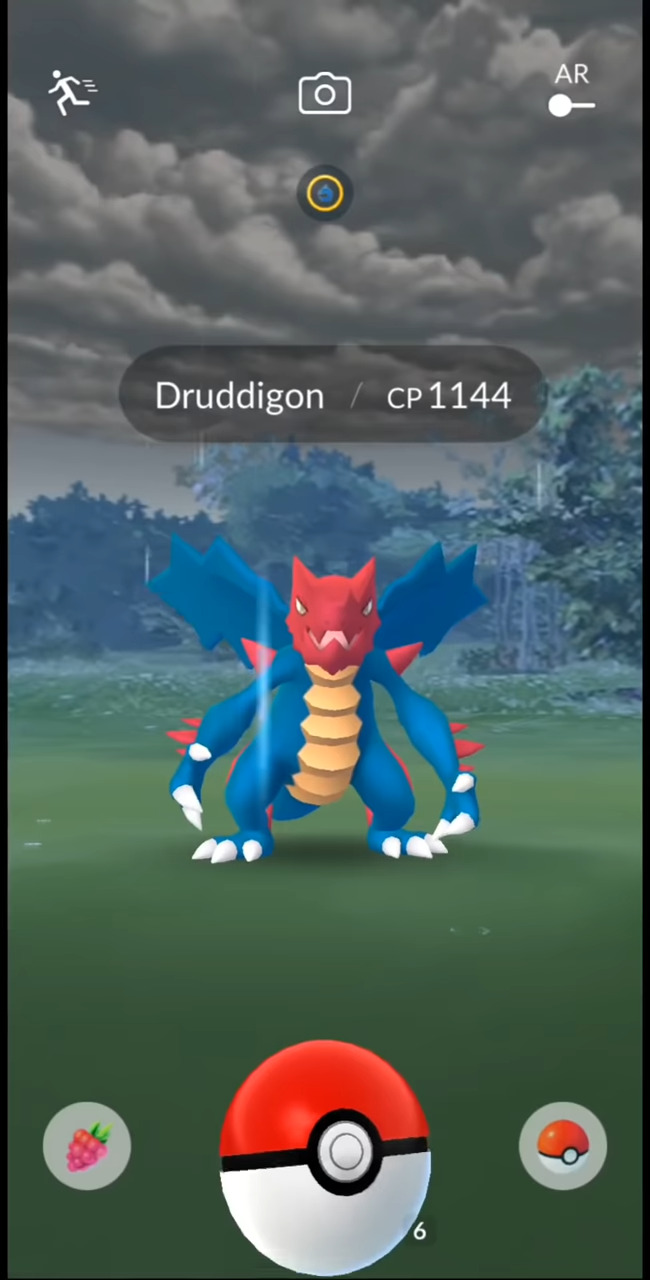 The event marks Druddigon’s debut to Pokemon Go. In the mainline games, it uses its rock-hard head and shark claws to drive out Pokemon from other nests to make it its own, but even then, it’ll occasionally venture out into the sun to warm its cold-blood through its wings.

In terms of gameplay, according to PVPoke, Druddigon is best described as a glass cannon. While it has poor bulk and won’t be able to take many hits, it can build up Charge Moves quickly while dealing heavy and fast move damage.

Faced with a Druddigon, ppponents will be forced to choose between sacrificing shields, or having their own Pokemon’s HP quickly dwindle. 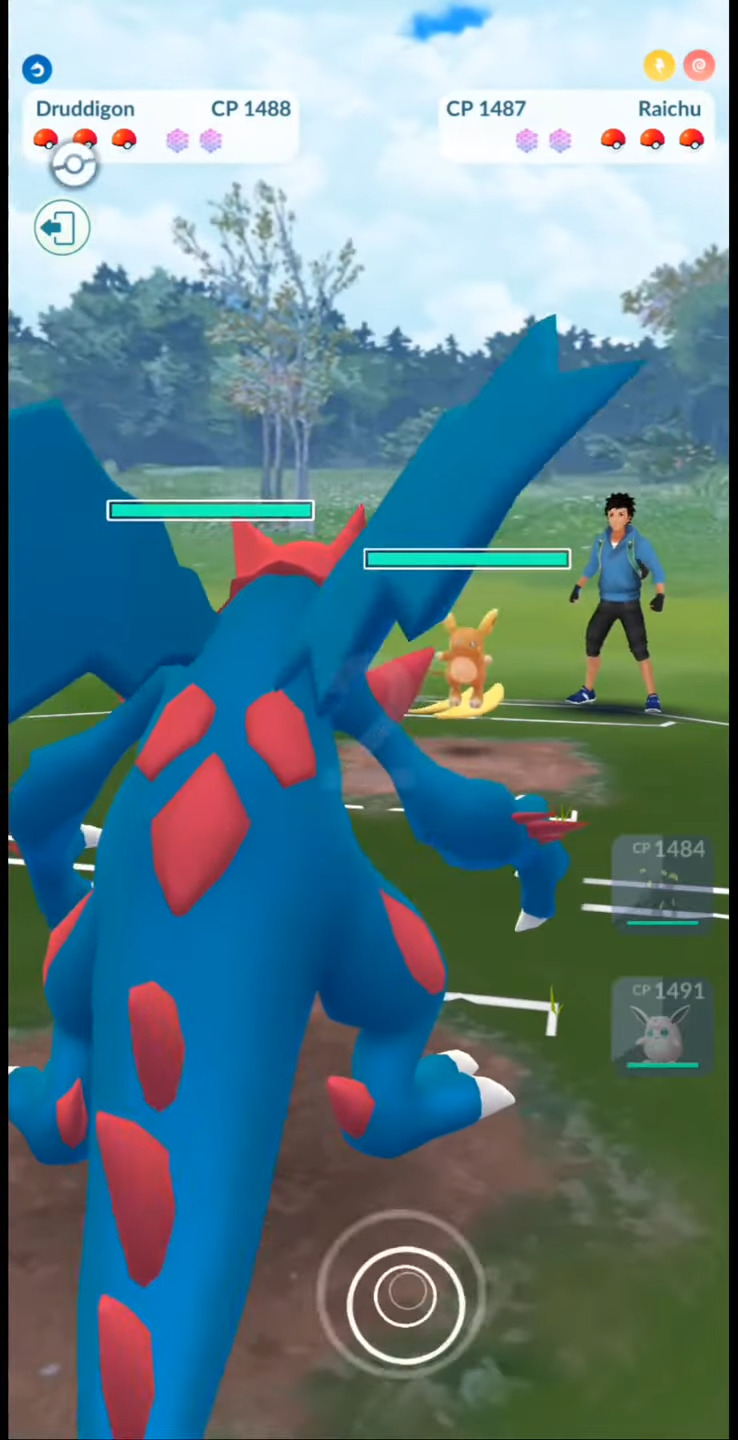 Between its two available fast moves, PVPoke recommends Dragon Tail over Bite as it builds slightly more energy per attack in battles against the AI, an effect which doubles in PvP battles (as seen on Serebii’s database listing).

Druddigon also has three possible Charge Moves- Dragon Claw, Night Slash, and Hyper Beam. Both Dragon Claw and Night Slash have the same power and energy requirement, with Night Slash having a chance to raise its attack two stages. While Hyper Beam does the most damage, it takes too longer to charge to be recommended by PVPoke- considering how frail the “rock-hard” Druddigon is. 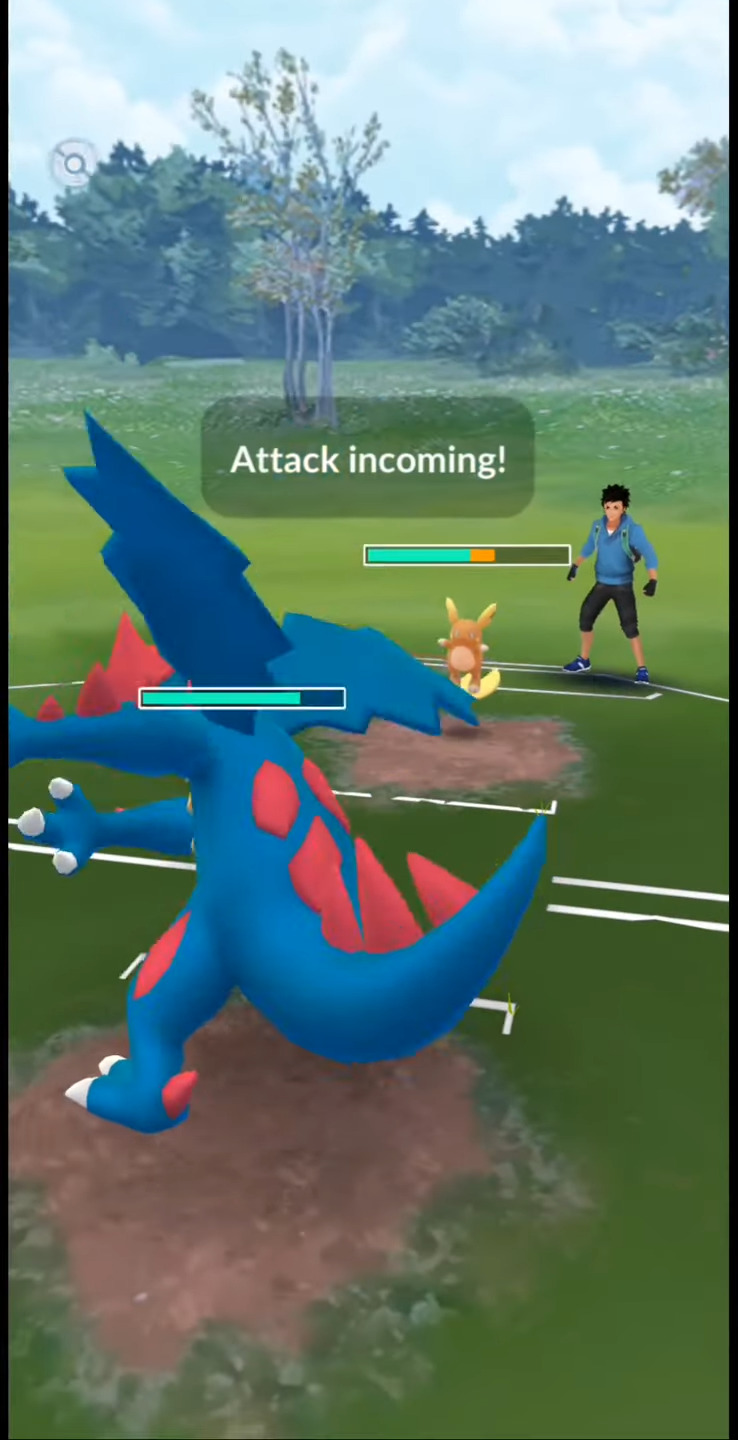 Overall, Druddigon seems to have the highest rating in the Ultra League in PvP, being #187 overall on PVPoke, #108 among switchers, and #88 on pure consistency. They tend to do best against Giratina (Altered), Talonflame, and Empoleon, while they should avoid Cresselia, Stunfisk (Galarian) and Scrafty.

It should be noted that in PvP, players usually fight against those of a similar rank every season. Ergo, players should not stress too much about min-maxing, especially when certain Pokemon are out of season and getting candy for them gets harder. 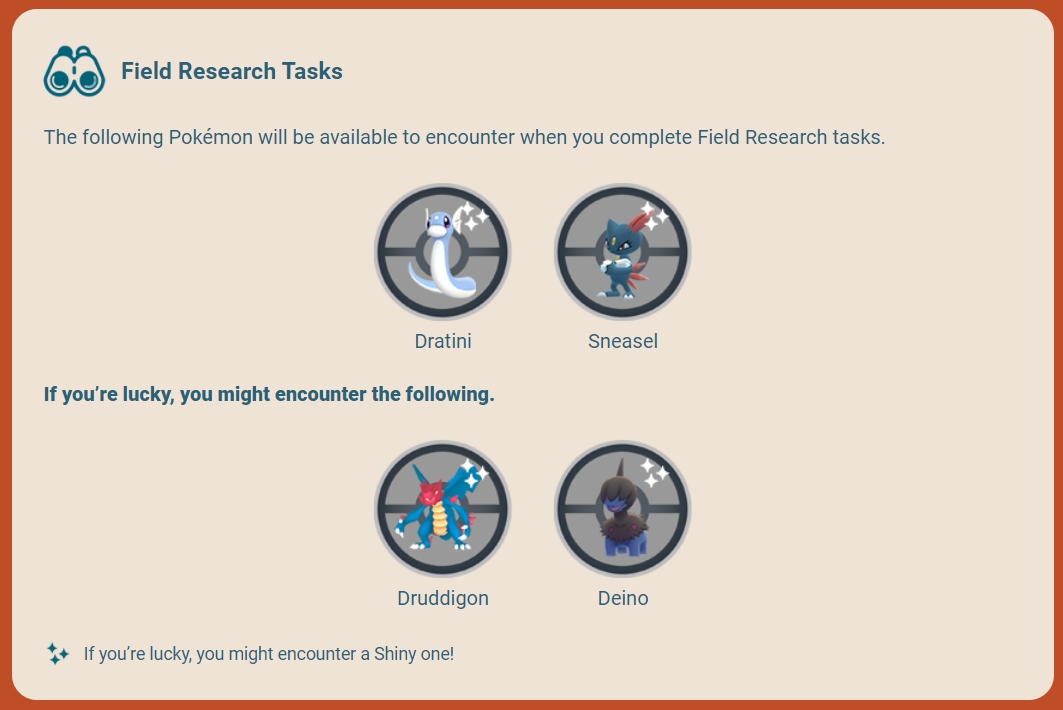 During the event, players can obtain some of the aforementioned Pokemon via Field Research (obtained via spinning a Pokestop or Gym sign when nearby). As noted by Serebii, 3 Nice Curveball Throws in a row will earn you an encounter with Dratini.

Winning a raid will lead to an encounter with a Deino, while completing it in under 60 seconds will get you a Sneasel encounter, while three raids victories in a row will see Druddigon appear. 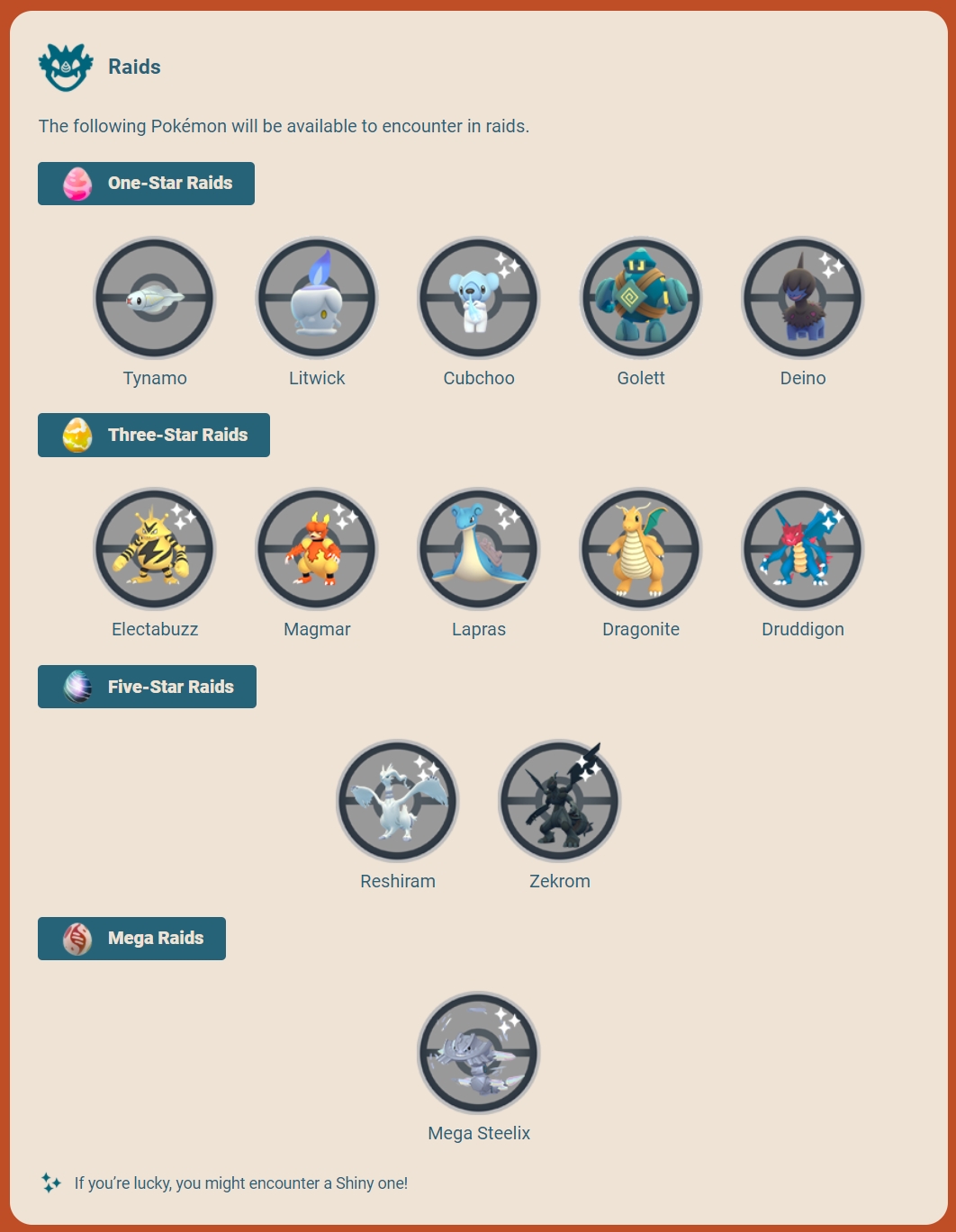 There will also be new Raid Pokemon alongside the Season of Heritage’s Reshiram, Zekrom, and Mega Steelix. These include the following: 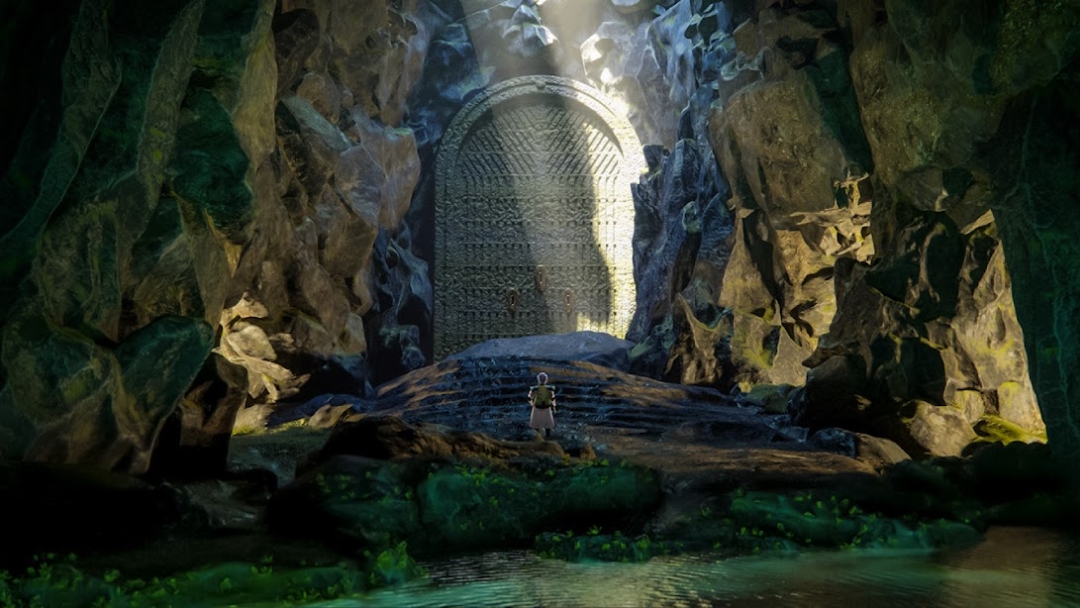 Finally, during the event players can buy a special event box. For 175 PokeCoins, players can obtain three Remote Raid Passes. Usually this costs 100 PokeCoins, or 200 for a set of three when bought in the in-game shop.

For those who do not wish to buy PokeCoins, This is the equivalent of one or more of your Pokemon defending Gyms for a total of just over 29 hours. However, there is a limit of 50 PokeCoins that can be earned daily, at a rate of 1 PokeCoin per 10 minutes. 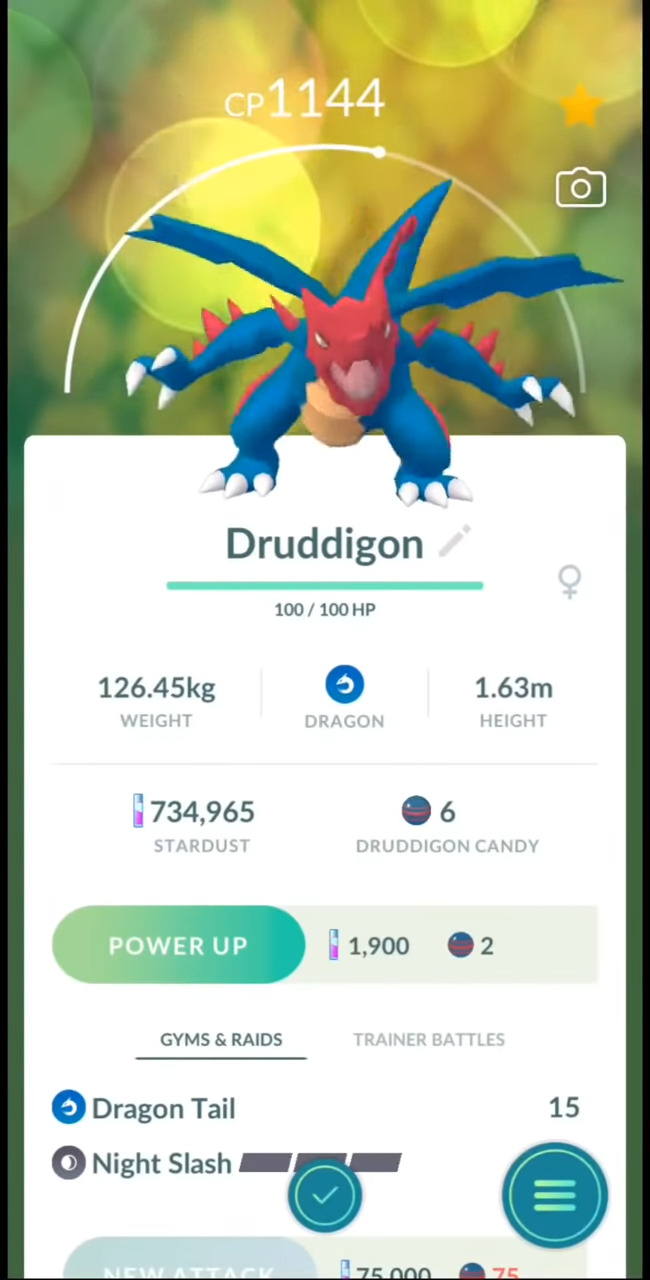 As such, it would take players three days and an extra 4 hours of defending to earn 175 PokeCoins. 100 PokeCoins can be bought for $0.99, with more coins offered in larger bundles.

The Dragonspiral Descent event ends December 12th. Future events during the Season of Heritage will see Pokemon GO Holidays Part 1 and Part 2 events will return from December 16th to 31st. 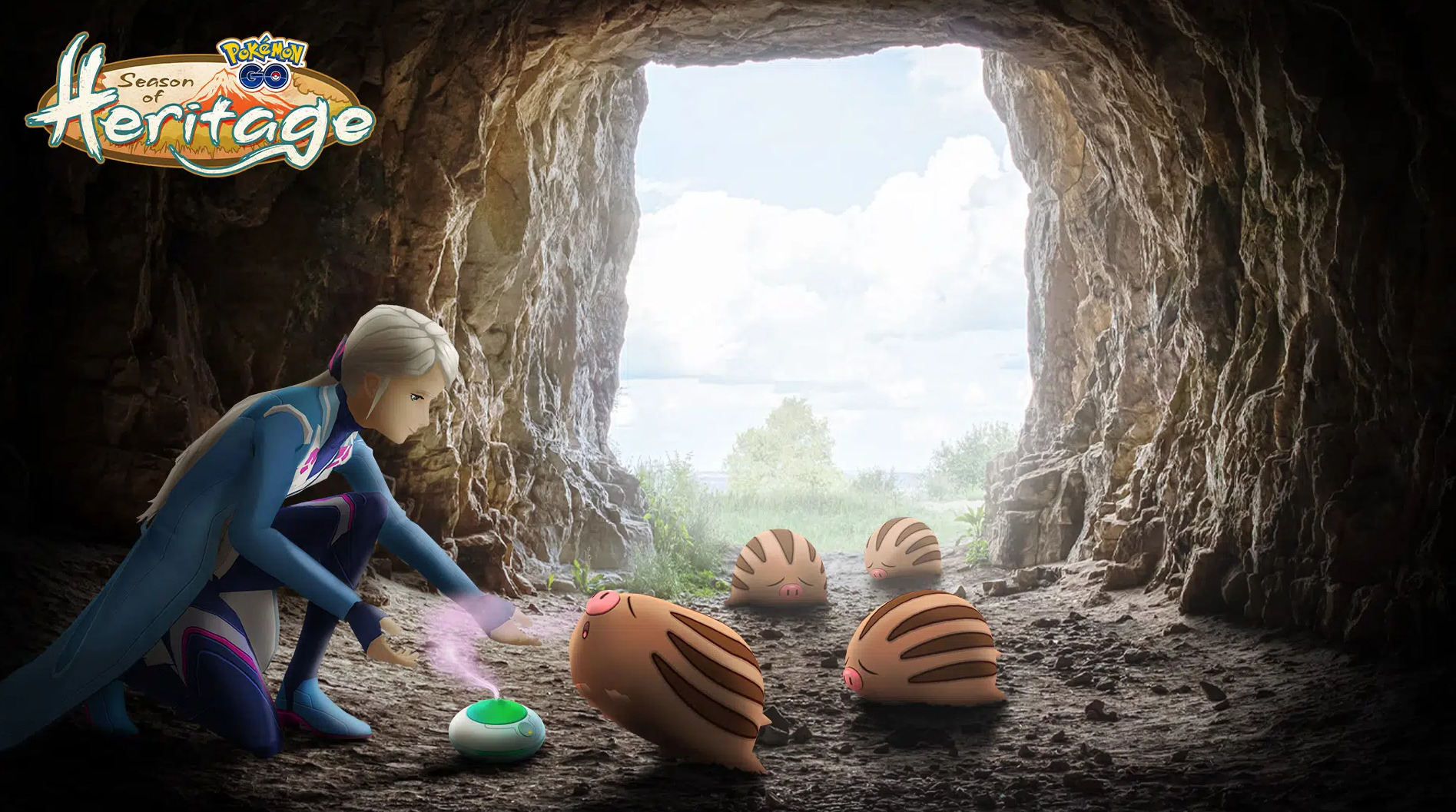 Are you excited to catch a Druddigon this winter? Let us know your thoughts on social media or in the comments down below!