Netflix announced they will be making a film adaptation of BioShock in partnership with 2K and Take-Two Interactive. 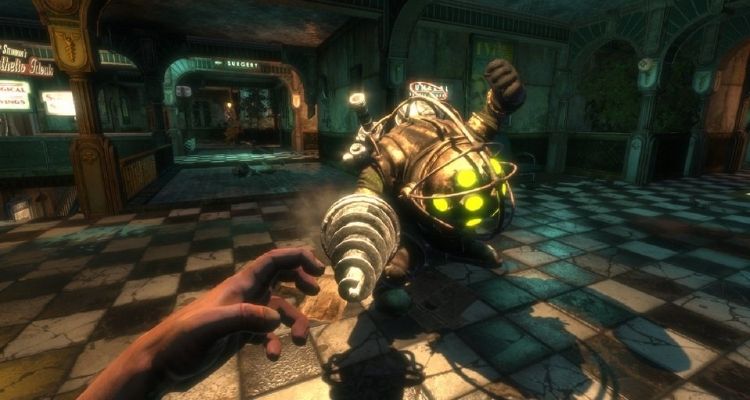 The announcement was made on Twitter with the official Netflix Geeked account tweeting, “‘”We all make choices, but in the end our choices make us.'”

They added, “Netflix + BioShock. Would you kindly stay tuned?” 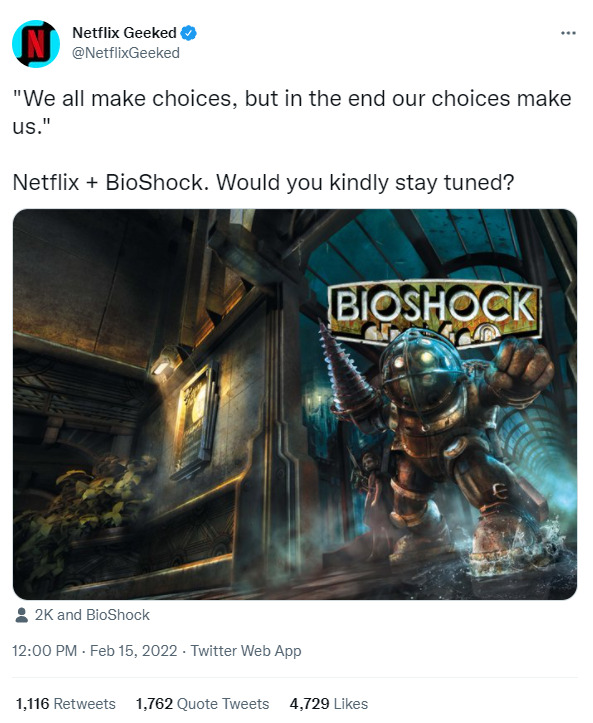 In a subsequent tweet they added, “Netflix, 2K and Take-Two Interactive are partnering to produce a film adaptation of the renowned video game franchise BioShock.”

Netflix did not offer any other details on the project including whether or not the film would be a live-action adaptation or an animated adaptation.

The BioShock franchise includes BioShock, BioShock 2, and BioShock Infinite. As noted in the press release from Netflix the games are “set across multiple dystopian and visionary landscapes gone wrong” and “the series blends sci-fi and horror to pose unique existential and societal questions that reshaped how game stories could be told – all amidst pulse-pounding action gameplay that rewards sharp shooting, clever planning, and lethal improvisation.” The original game was set in 1960 with players taking on the role of the protagonist named Jack after he survives an airplane crash and finds his way into the underwater city of Rapture that had been built by business tycoon Andrew Ryan.

Ryan originally imagined the city as a utopia, but the discovery of a genetic material called ADAM quickly brought the city into decline driving its citizens to insanity as they waged war over the resource.

As Jack, players must navigate through the city fighting numerous enemies including the franchise’s iconic antagonists, the Big Daddies. As you work your way through the city with the help of a man named Atlas you learn more about the city’s past and gain new weapons and abilities. Eventually, it’s revealed that Jack is the illegitimate son of Andrew Ryan and that he’s a Manchurian candidate used to get passed the security procedures Ryan has set up. He’s controlled by Atlas, using the trigger phrase, “Would you kindly?” Atlas is also eventually revealed to be Ryan’s business rival, Frank Fontaine.

Fontaine faked his death and took on the role of the heroic Atlas and rebelled against Ryan in order to take control of the city.

Fontaine previously mass produced, in secret, mass quantities of ADAM by implanting sea slugs into orphan girls known as Little Sisters. Implanting the slug allowed it to yield twenty to thirty times more ADAM and thus allowed him to sell more of the product to the citizens of Rapture that wanted a never-ending supply. BioShock has sold more than 39 million copies worldwide across its entire franchise. A fourth installment of the series is currently in development by Cloud Chamber.