The executive producer for the League of Legends MMO has warned fans there is “no guarantee” the in-development game may even ship. 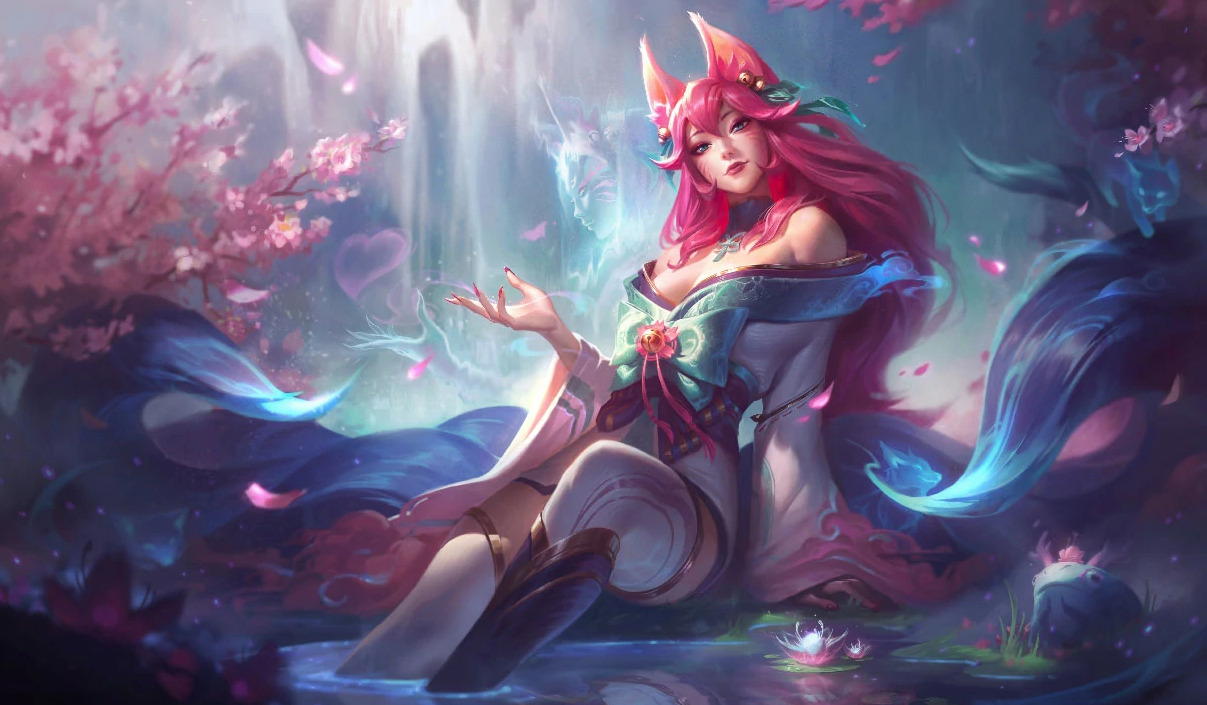 A League of Legends MMO was teased back in December 2020 when the project’s Executive Producer Greg Street wrote on Twitter, “I have news! My recent job at Riot has been to help develop the League universe, which we’re going to need!”

He added, “Because it is time. My new job is to kick off a big (some might say massive) game that many of you, and many Rioters, have been asking us to create. PS We’re hiring.” 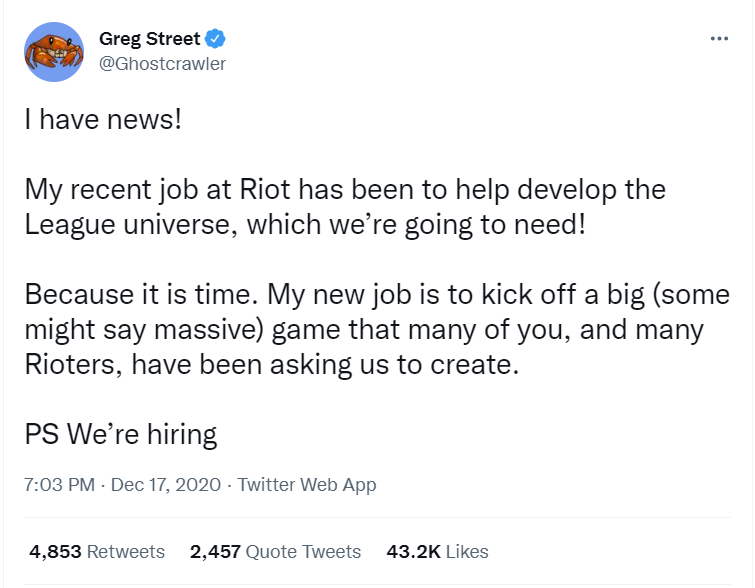 Street, the former Lead Systems Designer of World of Warcraft, is now singing a different tune.

He took to Twitter to convey possibly dire news for Riot Games’ MMO project, “There is no guarantee this game will ship. We are optimistic, but you just never know until it does.”

“However assuming it does,” Street placated, “this will be the fourth major franchise I have worked on (AoE [Age of Empires], WoW, LoL), and likely the last. And I am very okay with that. It will be a good final act.”

“I started to say things like magnum opus, but that sounds like it is my vision, and it very much comes from the team,” Street insisted. “I just steer the ship and watch for sea monsters.”

However, Street’s other comments soon made it apparent that what he had previously stated were merely words of caution, and that he had confidence in what the League of Legends MMO team had produced.

“Taking the most optimistic reading of this Tweet to assume that it’s a franchise you see yourself dedicating the remainder of your career to,” @HBMartini assumed, “which I for one am very much looking forward to. Best of luck with the development!”

“Yeah games like this are a commitment,” Street replied. “The hard part starts after it ships. 🙂 So I am imagining a long journey ahead.” 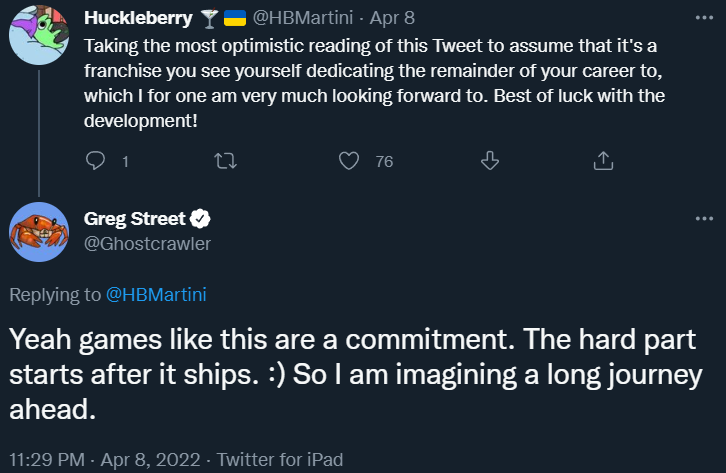 “Wait please don’t tell me you are retiring,” @phen0menalgamer whimpered. “This will hurt as bad as when the undertaker did if so. If you are…thanks man youre [sic] work has impacted a lot of people.”

@TheDrag0nReborn quickly highlighted “It’s an MMO, he’ll probably be busy with it for the next coming decade if it goes well.” “Yeah it will be a commitment for sure,” Street confirmed. 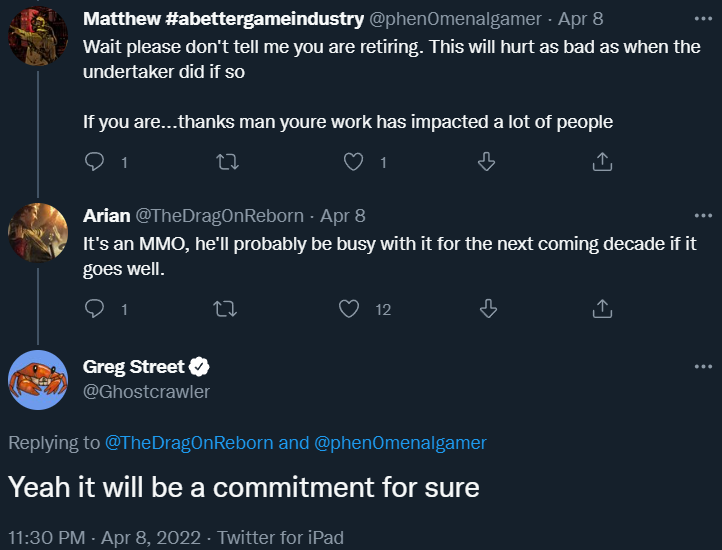 “I hope it does [ship], I also hope you guys start taking suggestion and feedback early on in the development,” @OGKeemu admonished. “Soo many MMORPGs getting made now a days don’t until beta and then core issues with the game can’t be solved because they got pointed out way too late.”

“Even if problems get pointed out late, we will fix them,” Street confidently asserted. “That is where so many of these games go wrong IMO” 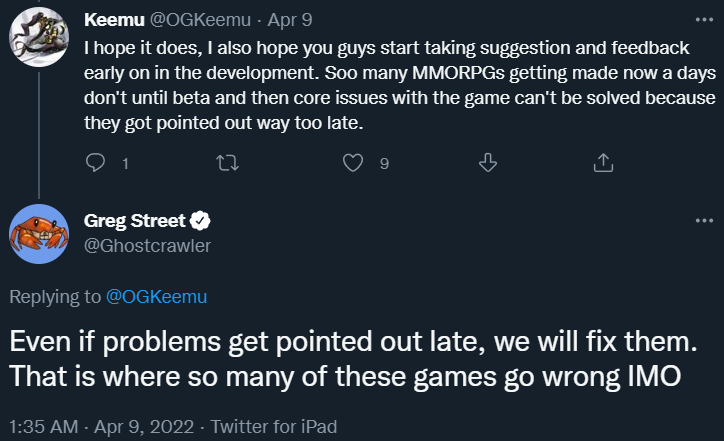 @CRONUT_boy expressed their doubt openly, tweeting “The wording on this i don’t like it, seems like things are not going so well is the vibes I’m getting [unamused face emoji]”

“Things are going super well,” Street retorted. “I am just being honest that Riot’s game standards are high and so are the expectations of players. We won’t ship a disappointing game.” 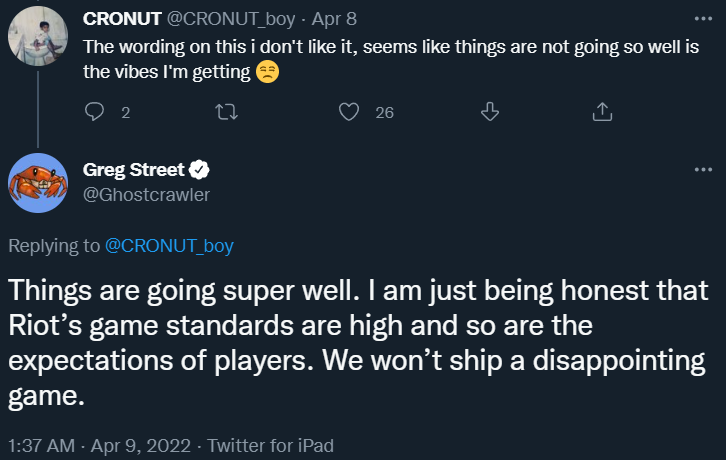 “Okay, but how’s it looking so far….” @MabritoMason queried. “It is looking good,” Street replied. “Best team I have ever been on and I have been fortunate to work with some great teams.” 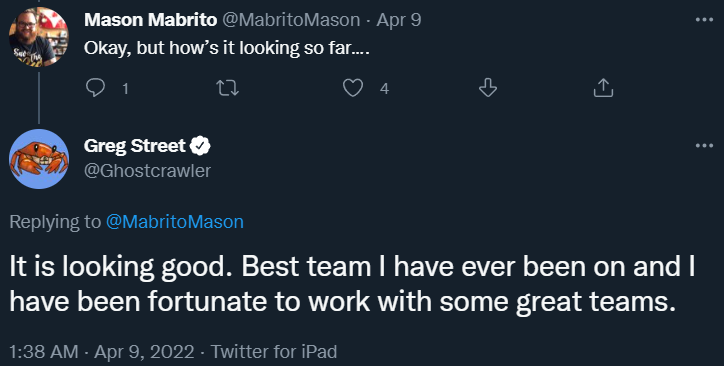 The skepticism of some users isn’t entirely unfounded. As noted above, the MMO was announced in development back in 2020, with the promise to delve more into the world of League of Legends.

Game Director Mark Yetter later apologized on April 6th of this year for the lack of updates. He wrote, “It’s a long road for the MMO project, trying to do it right so we build something worthy of expectations.”

Yetter then apologized, “Sorry you aren’t getting a ton of updates from us quite yet but we’re hard a work making strides every day. This team has a lotta heart, grateful as hell for them.”

Were Street’s comments a dose of realistic fears, or signs of greater issues for the League of Legends MMO? Let us know on social media and in the comments below.