The official Star Wars Twitter account made a couple of bizarre late night tweets regarding Obi-Wan Kenobi actress Moses Ingram where they informed fans they would resist if anyone intends to make her feel unwelcome and instructed their followers to not be racists. 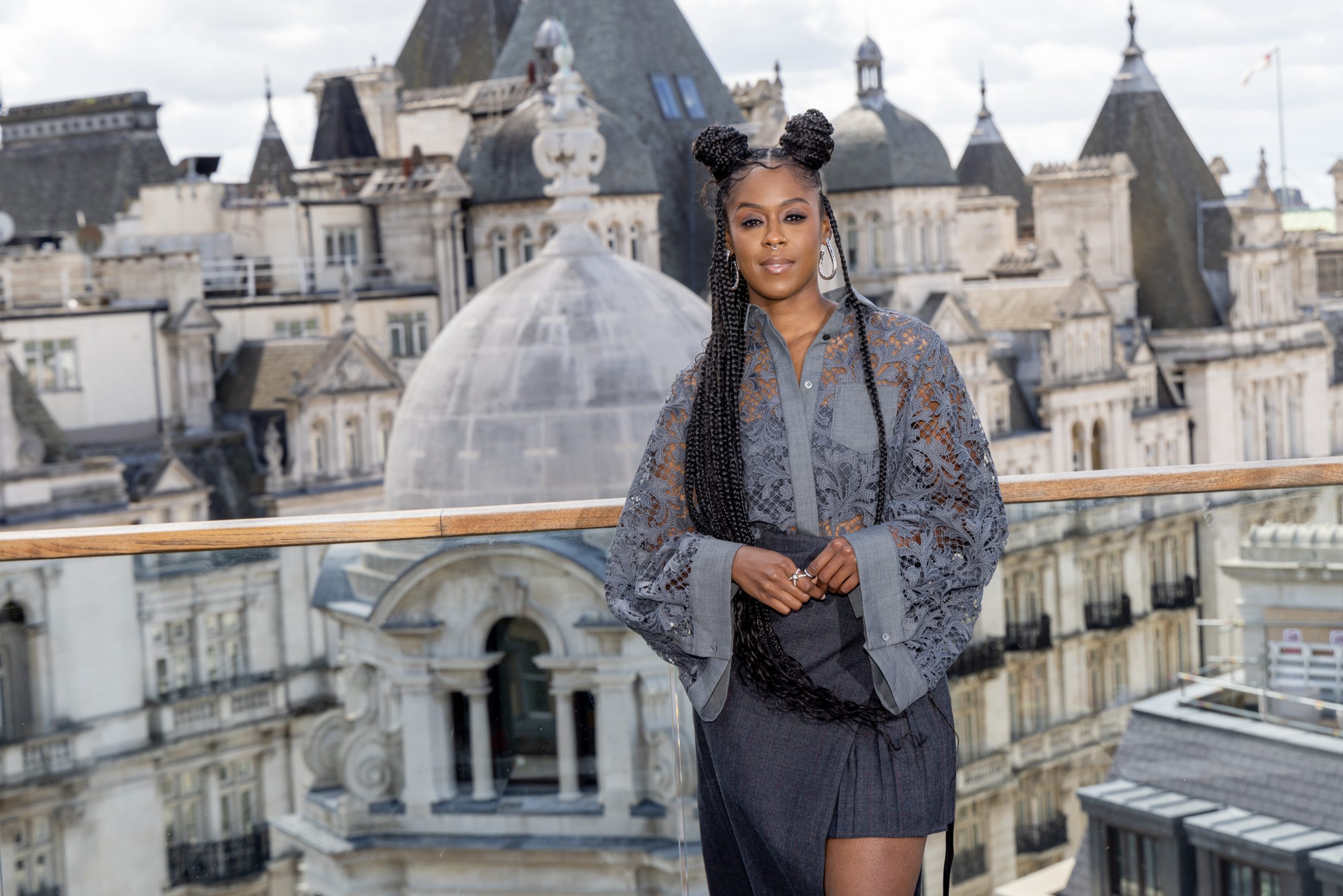 The pair of tweets came after Ingram recently did an interview with the British outlet The Independent where she revealed that Lucasfilm trained her to deal with “racist online abuse” towards her for simply playing the Inquisitor Reva in their Obi-Wan Kenobi Disney+ show.

Ingram said, “It was something that Lucasfilm actually got in front of, and said, ‘This is a thing that, unfortunately, likely will happen. But we are here to help you; you can let us know when it happens.’”

She also noted that the show’s director Deborah Chow and others in Lucasfilm were “putting the proper systems in place so I feel safe as we do the work.”

RELATED: Lucasfilm President Kathleen Kennedy Admits The Company Has Taken The Fun Out Of Star Wars

Now, the official Star Wars account tweeted, “We are proud to welcome Moses Ingram to the Star Wars family and excited for Reva’s story to unfold. If anyone intends to make her feel in any way unwelcome, we have only one thing to say: we resist.” 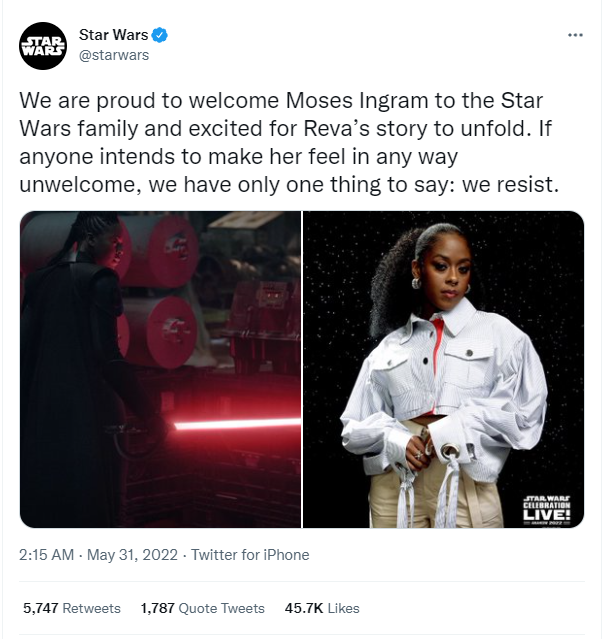 In a subsequent tweeted they added, “There are more than 20 million sentient species in the Star Wars galaxy, don’t choose to be a racist.”

Notably, Krystina Arielle, who hosted Star Wars Celebration over the weekend made it very clear she’s a racist in dozens of tweets over the past two years.

In March 2020 she wrote, “White people: f***ing stop it. Your racism won’t save you. Your ignorance is not an excuse.” 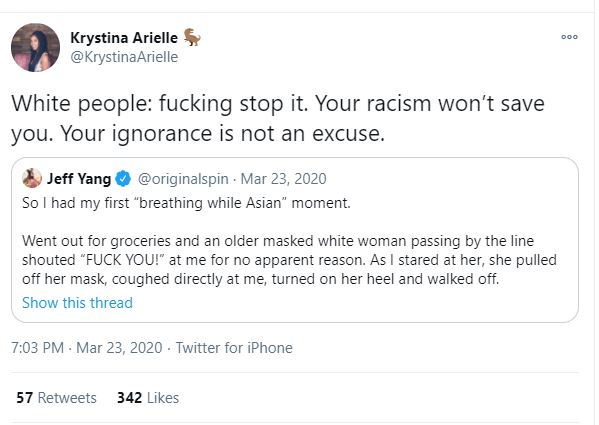 Then in May 2020 she wrote, “White conservatives please stop invoking racism like you give a s***. You don’t. You just want to be able to say ‘what about’ when someone calls out 45 and his blatant racism.”

In June 2020, she also wrote, “Just a reminder that White Women are just as complicit in the upholding and enforcing White Supremacy.” 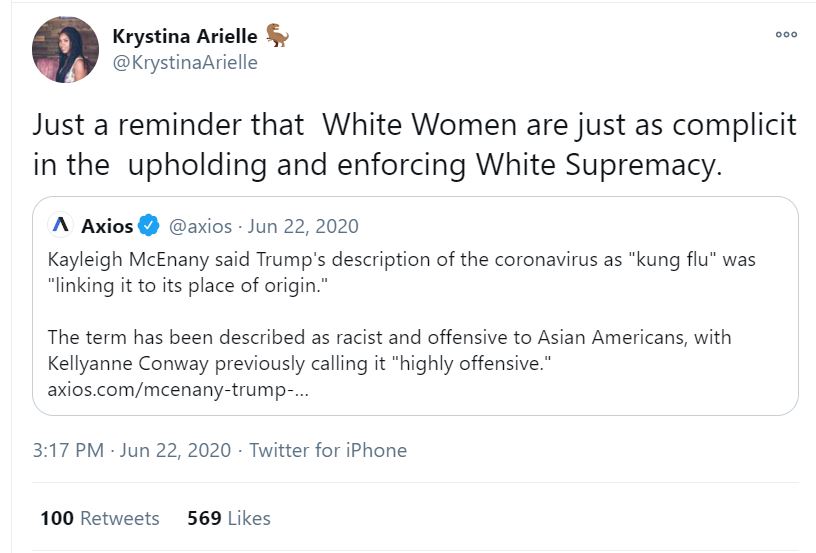 Star Wars would endorse Arielle’s racism writing on Twitter, “Our Star Wars community is one of hope and inclusivity. We do not stand for bullying and racism. We support Krystina Arielle.”

Not only does Star Wars employ and endorse racist individuals, but when it came to promote The Force Awakens in China, the company intentionally minimized actor John Boyega, who plays Finn, on the poster made for China.

YouTuber Nerdrotic replied to Star Wars’ most recent tweets showing a side by side of the Chinese poster and the one for the United States. He wrote, “Look for a lot of these to be dropped hypocrites.” 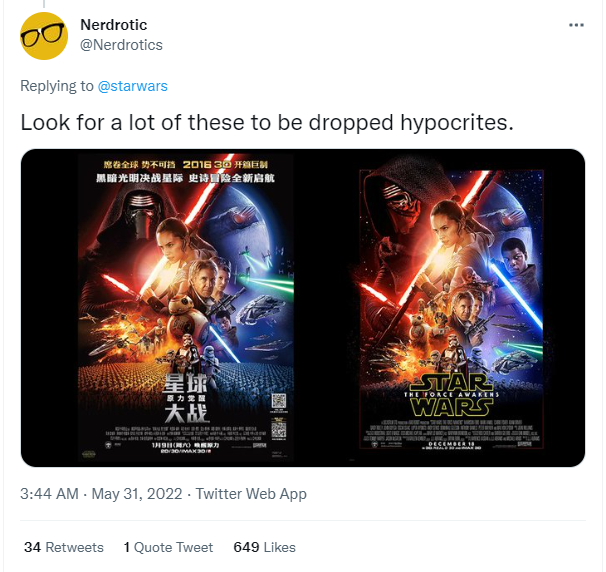 Not only did they minimize Boyega’s character for The Force Awakens, but Star Wars’ parent company, The Walt Disney Company, actually congratulated the Chinese government that enslaves the Uyghurs.

As part of their Mulan film, Disney thanked the communist party of Xinjiang. Xinjiang is the location where the Uyghur concentration and slave labor camps are located. 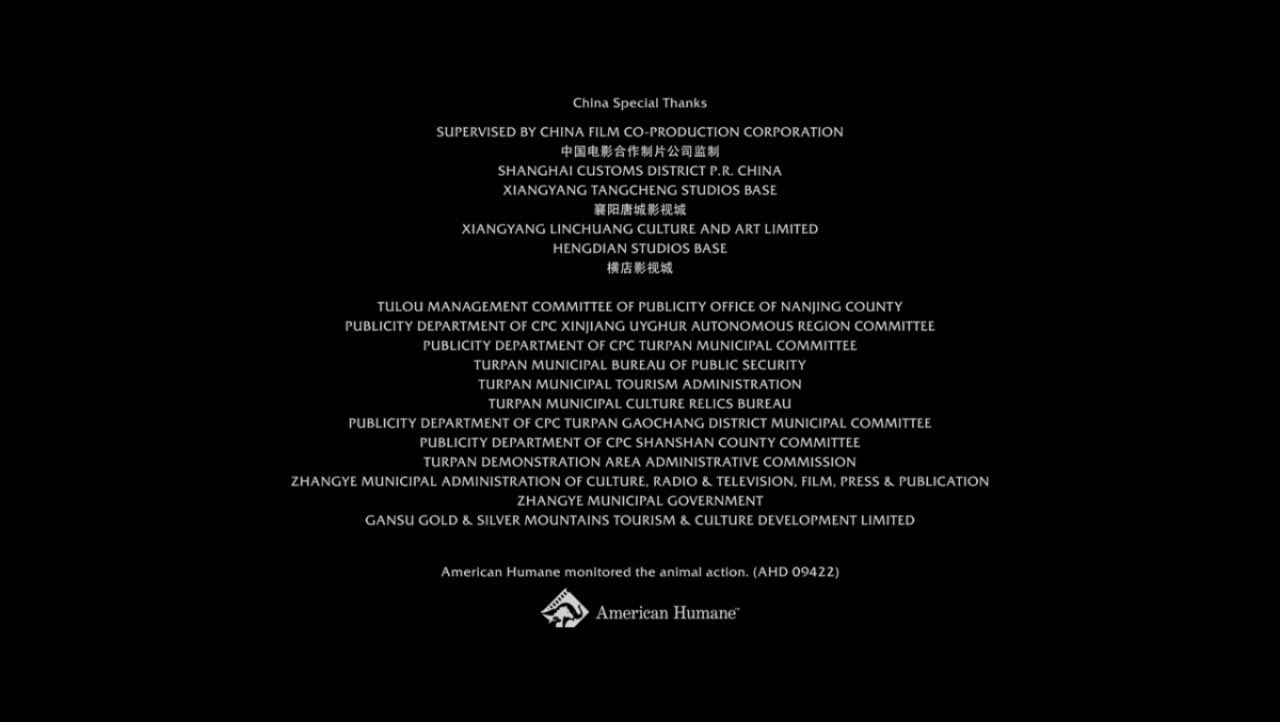 Maybe Star Wars and The Walt Disney Company should get their own house in order before they go about lecturing other people who have embraced all kinds of different Star Wars characters over the decades since the first film released.

What do you make of Star Wars’ bizarre tweets?