Sounds of shock and horror came from a crowd of over 1,000 people gathered at the Chautauqua Institution in New York, as an unidentified man ran up to the stage and repeatedly stabbed The Satanic Verses author Salman Rushdie. 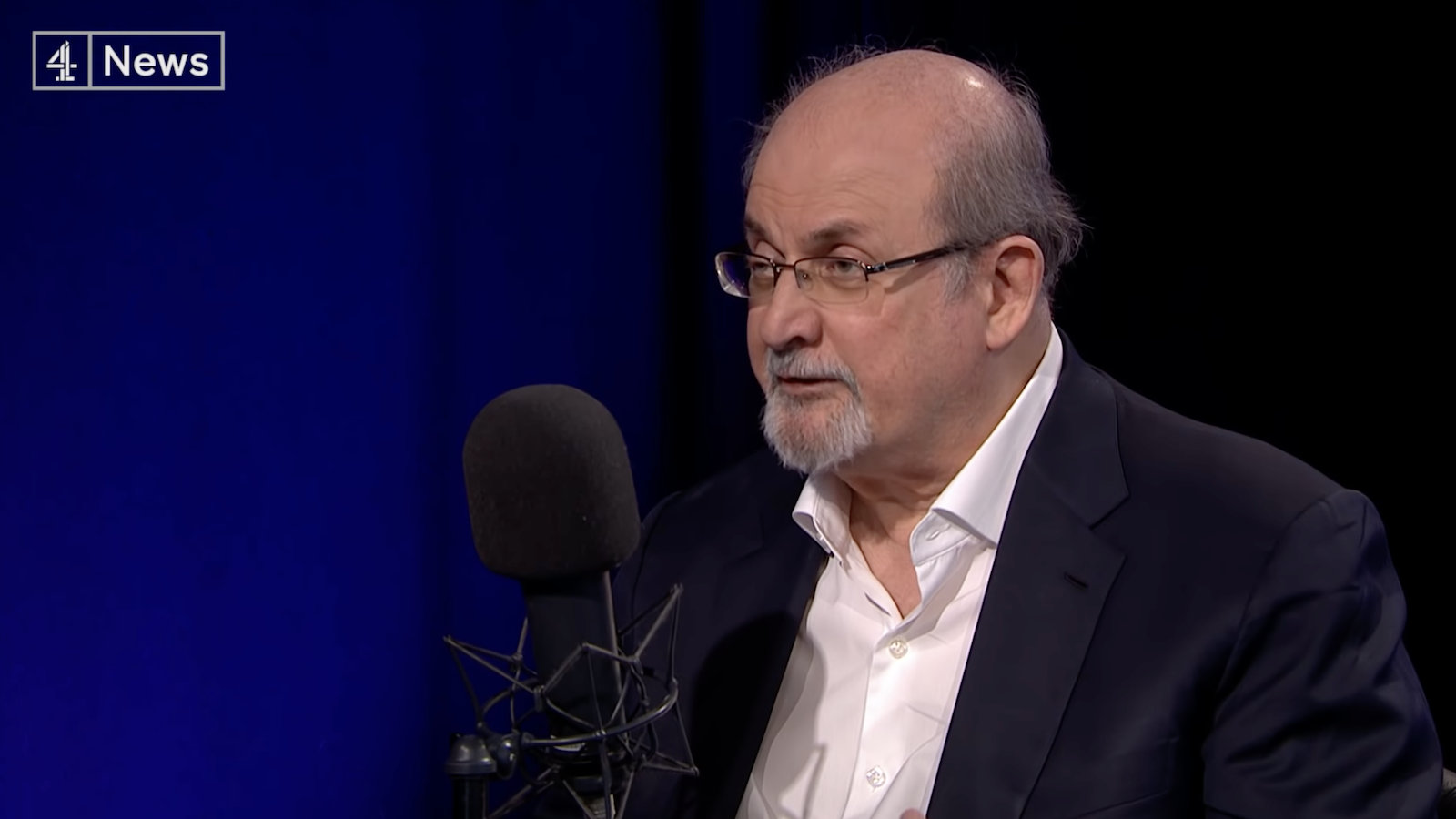 A helicopter rushed to the scene to take the Indian-born British author to a hospital. His current state of health is unknown as of this writing. As reported by Sky News, “Police said the event’s moderator, Henry Reese, suffered a minor head injury after also being attacked.”

A clip of the moment after Rushdie was attacked was shared by Rabbi Charles Savenor, who was in the audience when the 75-year-old author the event that took place in New York on Friday.

Professor at School of International Service, Carl LeVan, witnessed the moment in which the 24-year-old attacked Rushdie at the Chautauqua Institution event, recalling that “It was an absolutely horrific thing to witness.

“We saw somebody run onto the stage from where I was sitting, it looked like it was to my left, so stage right, perhaps from behind, and repeatedly stabbed Salman Rushdie,” said LeVan.

New information has surfaced over the course of the afternoon, revealing that Rushdie was stabbed a total of 15 times by a 24-year-old man identified as Hadi Matar, of Fairview, New Jersey. 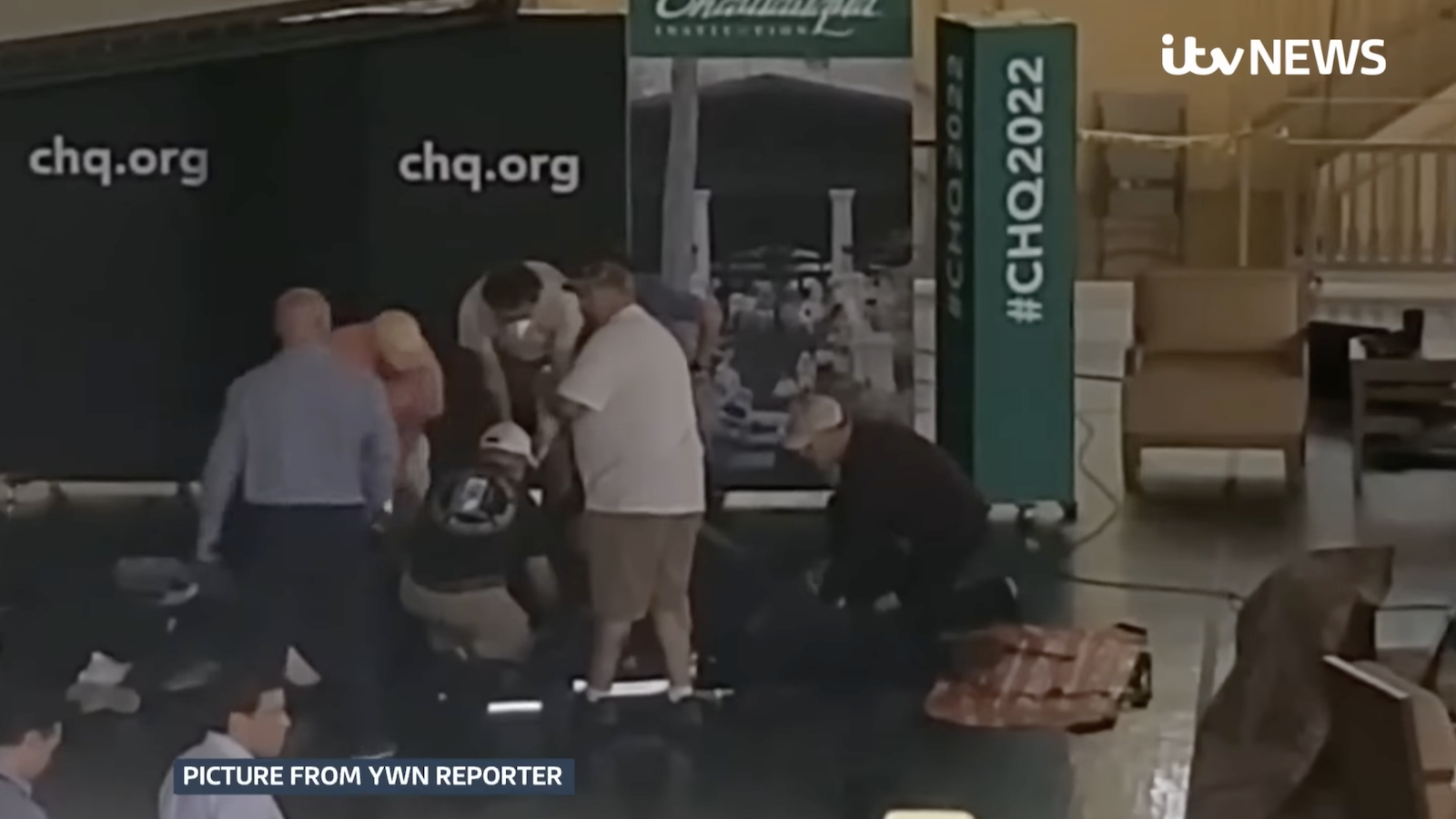 “The news is not good,” said the author’s agent Andrew Wylie. “Salman will likely lose one eye; the nerves in his arm were severed; and his liver was stabbed and damaged.”

Following the attack on Rushdie, law enforcement sources told The New York Post that “an initial investigation suggests Matar has made social media posts in support of Iran and its Revolutionary Guard, and in support of Shi’a extremism more broadly.”

New York State Police Major Eugene J. Staniszewski told reporters, “We don’t have any indication of a motive at this time,” confirming, as of writing, that Matar’s motives were unclear. Charges against the attacker have not yet been announced. 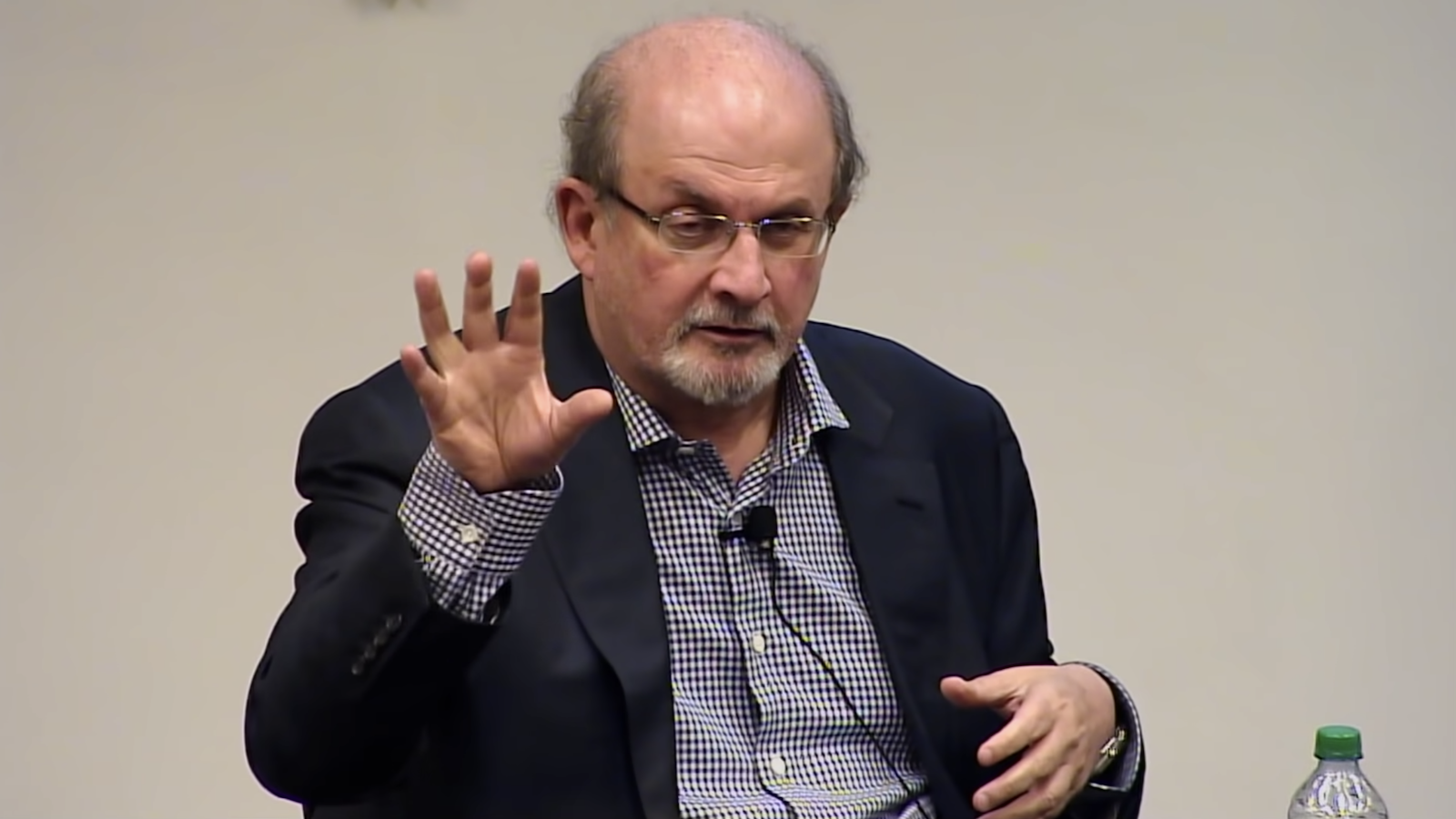 Rushdie was set to lecture the gathered crowd as a pivotal author who’s spoken truth to Islamic power for decades. He came into controversy with his 1988 book, The Satanic Verses, which refers to Quranic verses on three pagan Meccan goddesses, Allat, Al-Uzza, and Manat. The book was nominated for multiple awards, but many Muslims took offense to the work of fiction, claiming it mocked their faith.

The buzz about The Satanic Verses grew and reached the Middle East. Pakistan banned the book and a crowd of more than 10,000 people took to the streets to burn The Satanic Verses; devolving into a violent riot. Politicians in Great Britain even called for the book to be banned, leading marches which resulted in Rushdie receiving around-the-clock police protection. 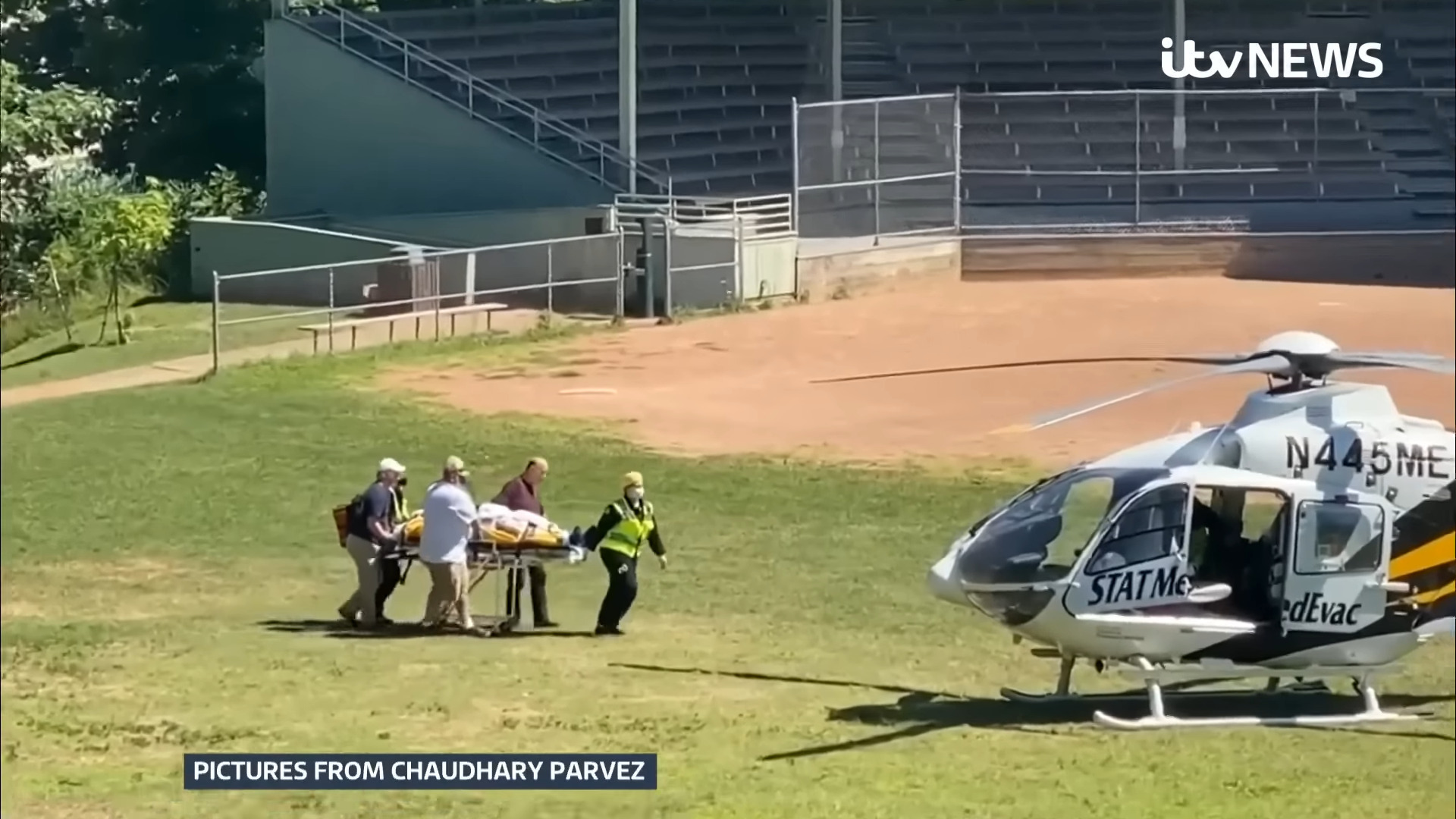 In the middle of 1989, the Ayatollah of Iran, Ruhollah Khomeini, issued a fatwa against Rushdie, a ruling in Islamic law that provided a bounty on the head of the author, wherein any Muslim who killed him would be granted entry into heaven. The fatwa also applied to Rushdie’s publishers.

In 1998, Iran’s government had turned over and the current leader, President Mohammad Khatami, said it no longer supported the killing of the author.Several Islamic scholars have noted that the only way to remove a fatwa under Islamic law is for the original issuer to rescind the order. This is impossible since Khomeini is no longer alive, which means the fatwa is still considered in place by some extremist Muslims. 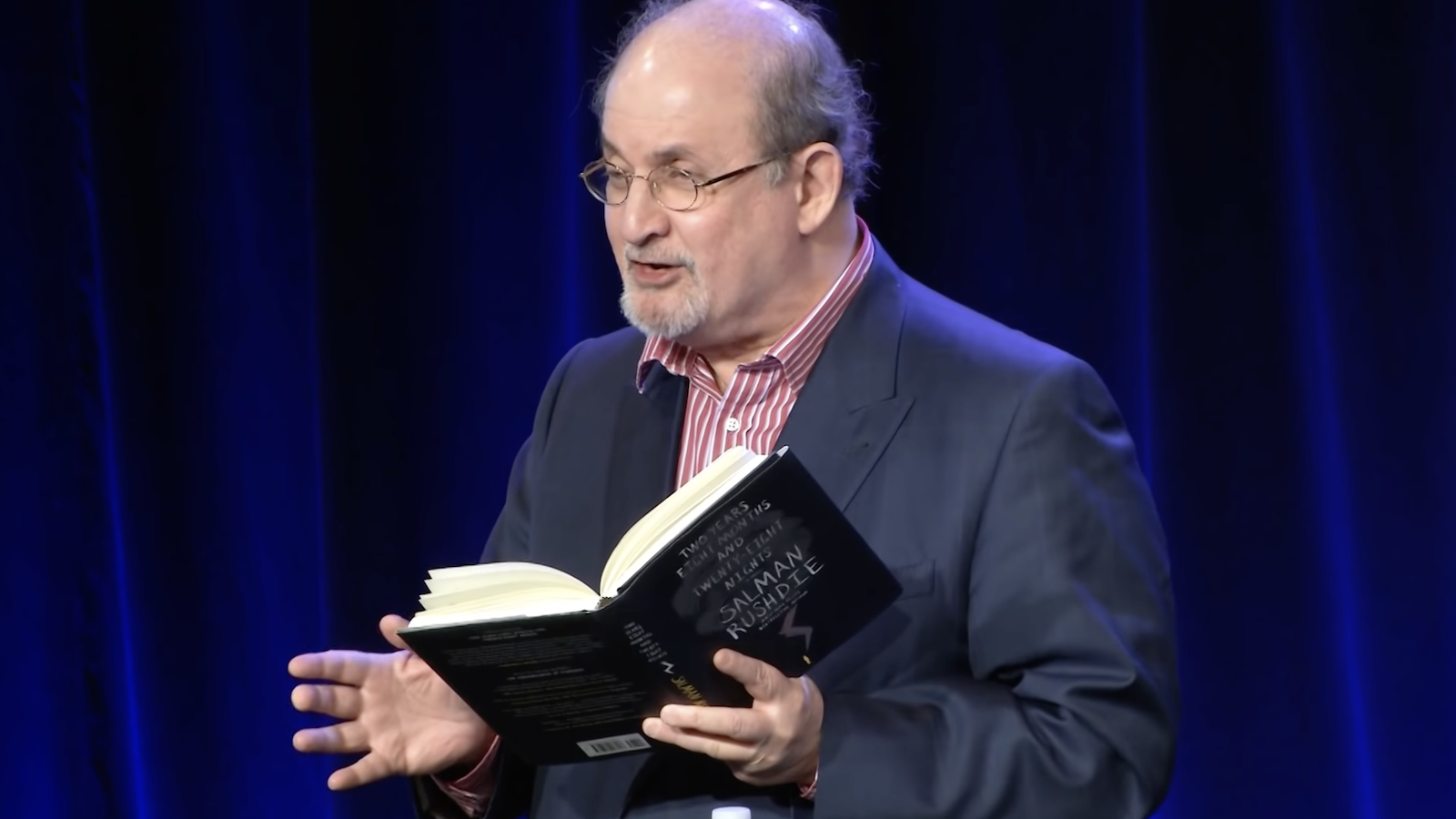 Despite the fatwa still being in place, Rushdie announced at the time he would not be living in hiding any longer and began a public life in support of his novels with a series of lectures; maintaining somewhat of a normal life until the moment he was attacked.

When events like this occur, the media tends to play politics with these situations; which causes a percentage of the public to be misinformed about these topics. Given the high-profile nature of the Islamic threat regarding Rushdie, it is disingenuous at best to leave out the identifying information of the attacker in these stories.

The public has a right to know that a fiction writer is threatened by extremist fanatics who would rather murder him than allow him to speak about his art.

What do you make of the attack on Rushdie? Leave a comment down below and let us know!