House of the Dragon offered up another dynamite episode on Sunday evening, furthering the series’ up-and-down behavior over the last few weeks. Therefore, it’s hard to get excited for the follow-up episode, since it could very well be a dud in the same way that ‘The Princess and the Queen’ was. Narrative inconsistencies aside, this latest episode is easily the strongest to date. 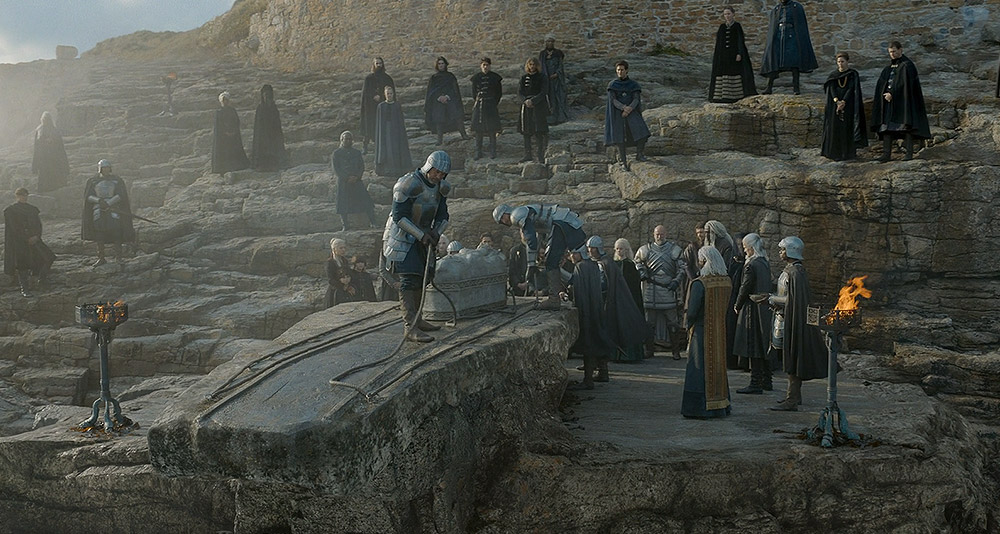 Laena Velaryon’s funeral in House of the Dragon, HBO

RELATED: House of the Dragon: ‘The Princess and the Queen’ (Episode 6) Review

‘Driftmark’ is aptly-named, since the entirety of the episode takes place within its lands. After Laena Velaryon’s failed pregnancy led her to commit suicide via her own dragon, King Viserys and his extended family travel to Driftmark to attend her funeral. It’s a somber affair, even with Daemon Targaryen laughing openly during her eulogy.

With the families gathered under one roof, simmering tensions boil three ways, leading to quite a few new developments. The first, and most pivotal is Rhaenyra’s affair with her uncle Daemon; over a decade in the making while both were forced to endure the banality of their own unhappy marriages. Fans of George R.R. Martin’s source material aren’t surprised, but the story could still unfold in some interesting ways. 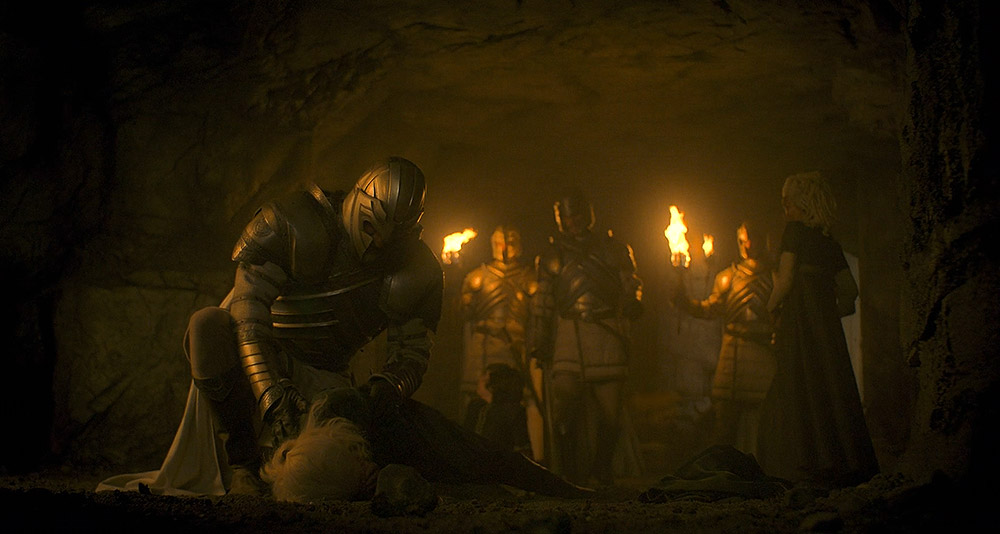 Knights rush to a wounded Aemond in House of the Dragon, HBO

The second major development centers on Prince Aemond, the second son of King Viserys and Lady Alicent. Routinely mocked by the other children in his family, Aemond finally comes into his own when he successfully tames and rides the humongous dragon Vhagar, who once belonged to the late Laena Velaryon.

Jealousy and anger soon erupt within the remaining Velaryon children, leading to a physical altercation that draws in Rhaenyra’s own illegitimate children. Aemond’s face is slashed with a dagger, leaving a tremendous scar, and robbing the young boy of an eye. 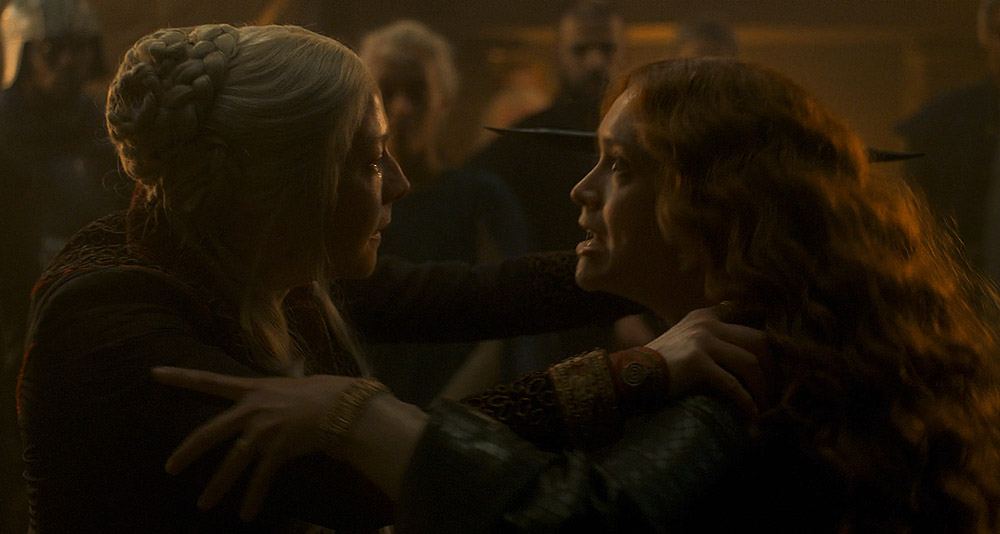 Queen Alicent attacks Princess Rhaenyra with a dagger in House of the Dragon, HBO

What follows next is a confrontation that spills out between both families, each accusing the other of wrongdoings. It also drags the rumor of Rhaenyra’s children into the light, further exacerbating tensions within the family. King Viserys tries his best to mediate the squabble before it spills into all-out war, but it’s clear his influence is waning….fast. 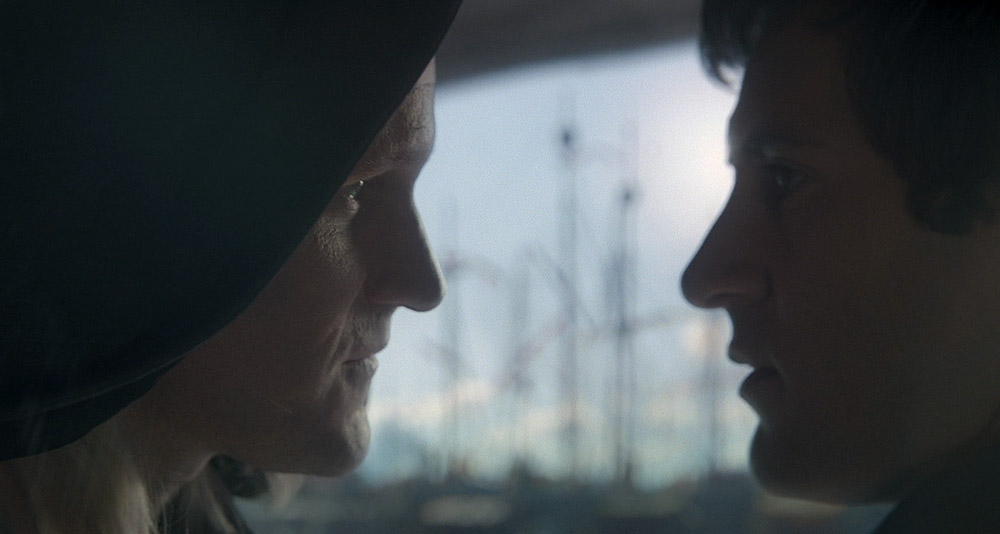 Daemon concocts a brilliant plot in House of the Dragon, HBO

Realizing that Alicent has plans for Rhaenyra, the latter secretly weds Daemon Targaryen after dealing with her husband Laenor in one of the most creative plot twists yet glimpsed on the show. From hereon out, the stage has been set for the real story to (hopefully) kick in. The question is…..will it?

There’s a lot to like about this latest episode, mainly because of what it brings to the table. ‘Driftmark’ is a watershed moment for the characters in this series, and it signifies that the rivalry between Rhaenyra and Alicent cannot be mended by dialogue, compromise, or the decree of one King. 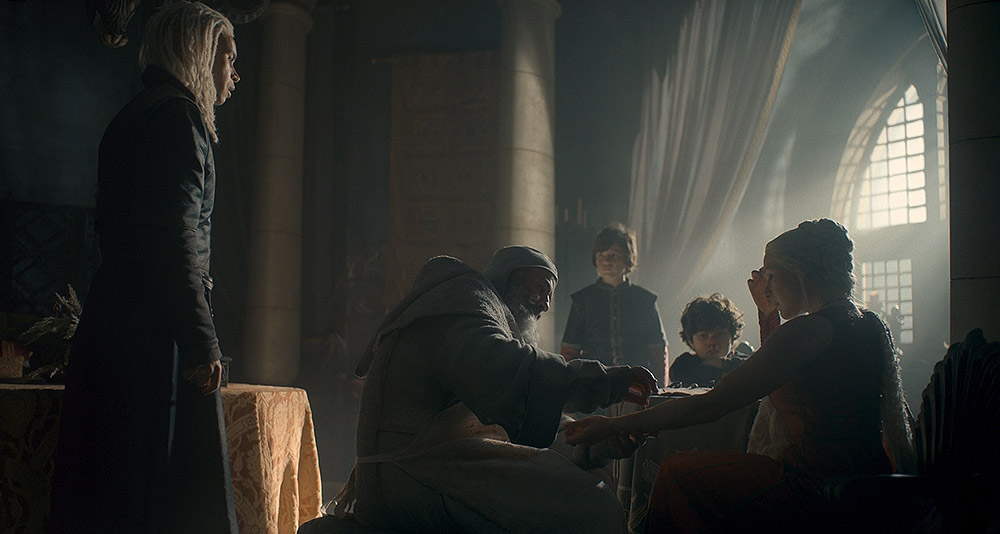 A physician attends to Rhaenyra’s wound in House of the Dragon, HBO

Naturally, this is a prelude to the Dance of the Dragons, and time will tell whether the showrunners can actually make the conflict seem interesting. The bloodletting between their children goes a long way in showing just how corrupt the nature of being a royal truly is, and demonstrates the level of ambition they have been indoctrinated to pursue from birth.

The post-brawl standoff is easily one of the best scenes of the show, with tensions running so thick that one would need a chainsaw to get through them. For the first time, Alicent lays her cards out on the table and goes on the attack both physically, and via the spoken word, and it’s an ugly scene to be sure. 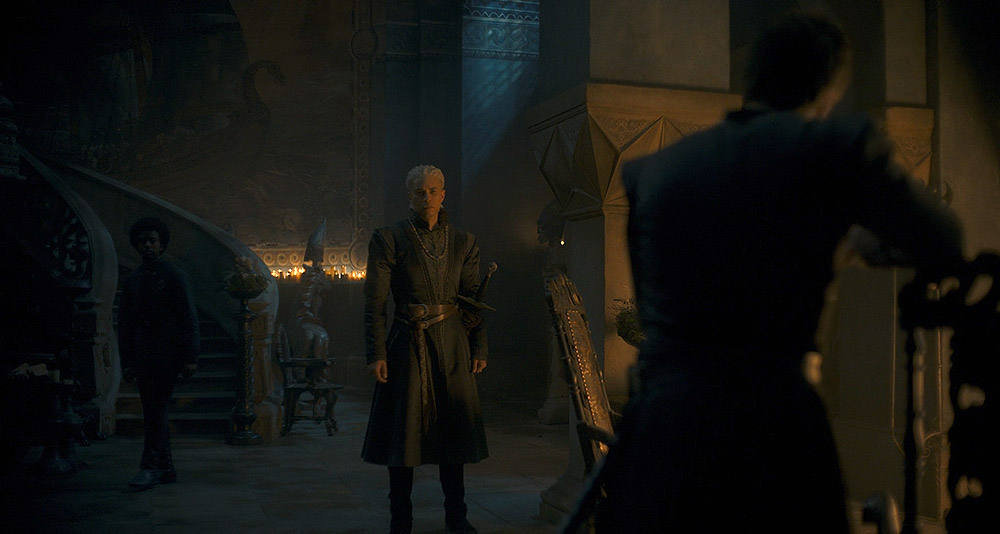 Laenor is confronted in his own hall in House of the Dragon, HBO

It ends with one of the best twists in the show yet seen, which demonstrates that for all her ambition and cunning, Princess Rhaenyra is not without a heart. Nor is she willing to descend to the depths of despicable depravity to solidify her claim on the throne, which is a nod towards the future ascension of her relative, Daenerys….at least in the beginning.

In the background sits Otto Hightower, who has been reinstated as Hand of the King, following the orchestrated demise of Ser Lyonel Strong. He’s clearly the wild card in the series, and it isn’t yet quite clear if his machinations are noble, or designed to move him ever-further towards the Iron Throne. 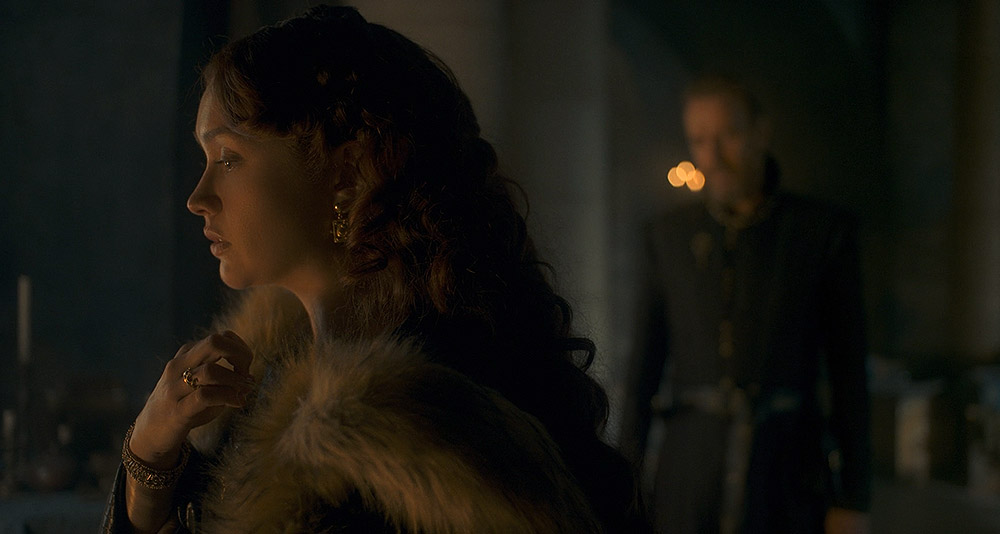 Otto Hightower speaks to his daughter in House of the Dragon, HBO

For the moment, this is the best the show is going to get, even if it’s a bit rough around the edges compared to Game of Thrones’ meticulous early pacing. ‘Driftmark’s’ storyline, action and character development should have been the template for the show since day one, and it’s a bit irritating to see it play out so late in the season.

There are few negatives to note in this latest episode, but they are present. First, the accelerated pace of the show does ‘Driftmark’ no favors. It feels as if the episode was rushed forward in order to cram in the next few episodes, but in reality, this could have easily been the season’s cliffhanger closer. 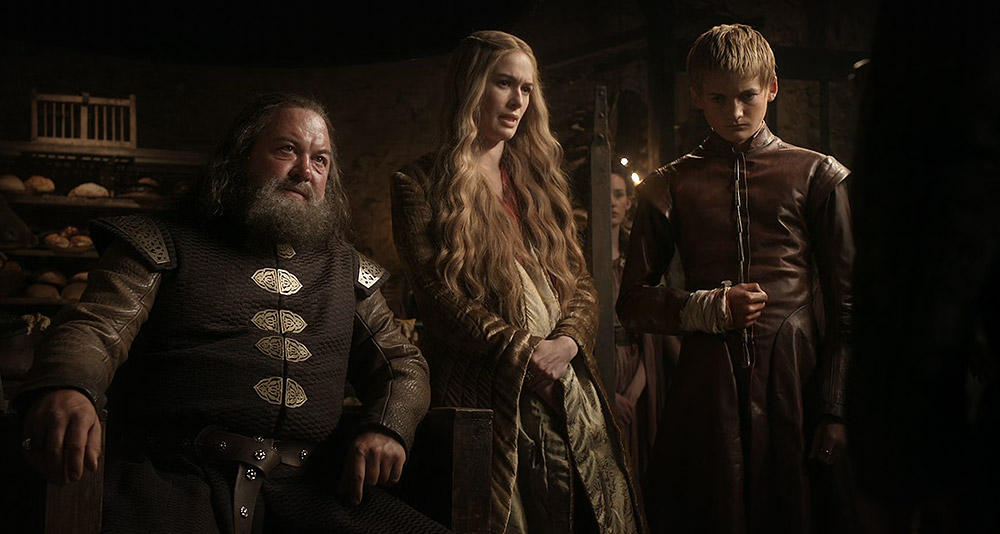 Robert, Cersei and Joffrey in Game of Thrones, HBO

Second, the standoff between the families is definitely a high note, but it harkens back a bit too closely to Game of Thrones’ season one episode ‘The Kingsroad.’ The premise was similar – the Queen demanding retribution for an injury inflicted on her son by another family member, creating animosity, distrust and hatred in the process. Even the line “What would you have me do?” is uttered by King Viserys, the same as it was via Robert Baratheon.

Third, character motivations feel a bit out of sync in this episode. The most notable is Ser Criston Cole, who gives up a shot at payback against Rhaenyra, even when ordered so to do by Queen Alicent. Perhaps it’s Cole demonstrating that he is still an honorable knight, but given that he beat a man to death in the middle of a pre-wedding feast, that seems a bit suspect. 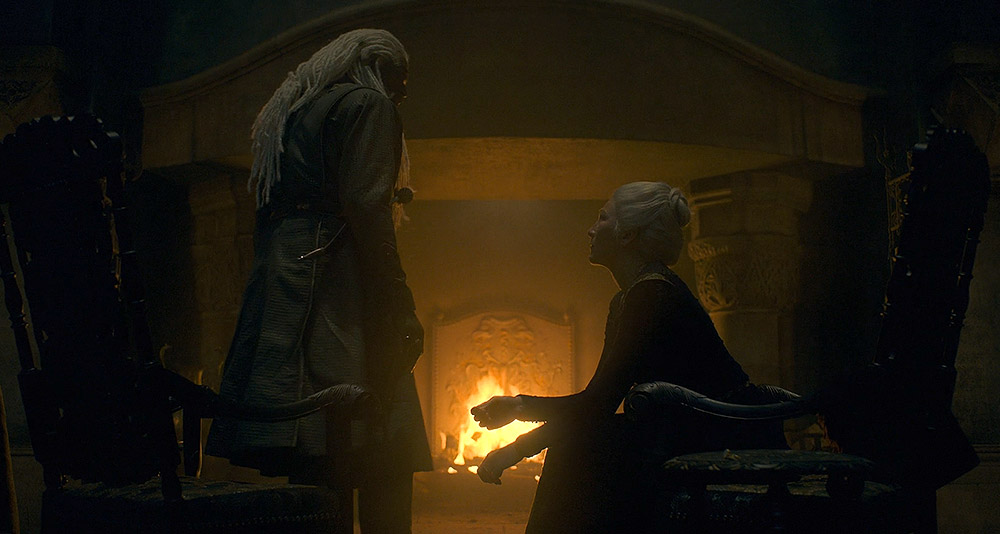 The Velaryons speak after the death of their child in House of the Dragon, HBO

It’s also quite odd to see Princess Rhaenys suddenly abandon her ambition for a Velaryon to sit on the Iron Throne. Perhaps the stress of losing Laena was a factor, but this is the same woman who was quite willing to pawn her off as wife to King Viserys when she was only 12 years old. 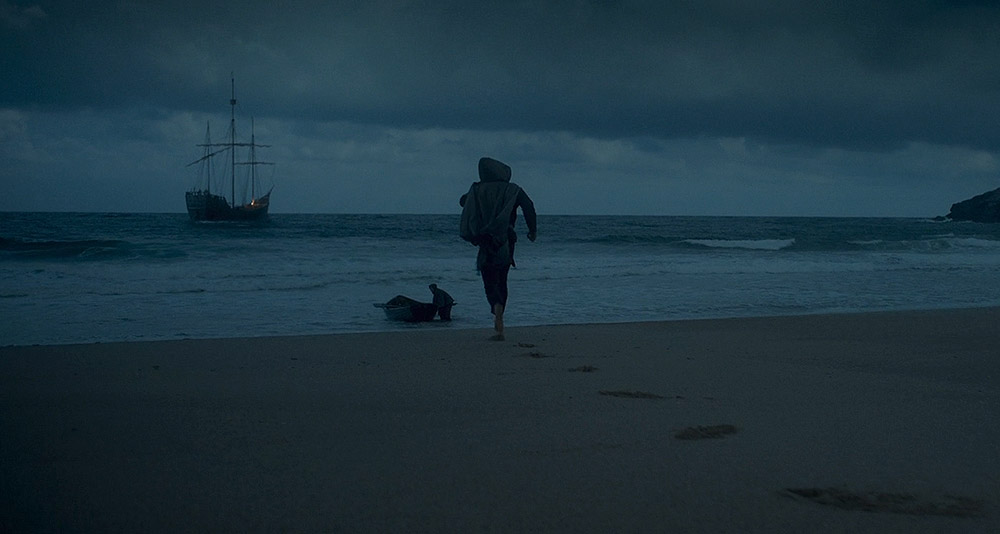 Laenor flees Driftmark in House of the Dragon, HBO

Which brings focus on Laenor, and his reason for doing what he does at the end of the episode. On one hand, he laments the fact that he’s been a rotten husband to Rhaenyra, but on the other, he co-orchestrates one of the biggest bait-and-switches in Westeros’ history.

‘Driftmark’ is good stuff, but it comes at the cost of wondering what next week’s episode will be like. The show’s biggest Achilles’ Heel is its lack of consistency when it comes to balancing dialogue and action, not to mention character development, the utilization of key characters, and of course, the chronology of events. 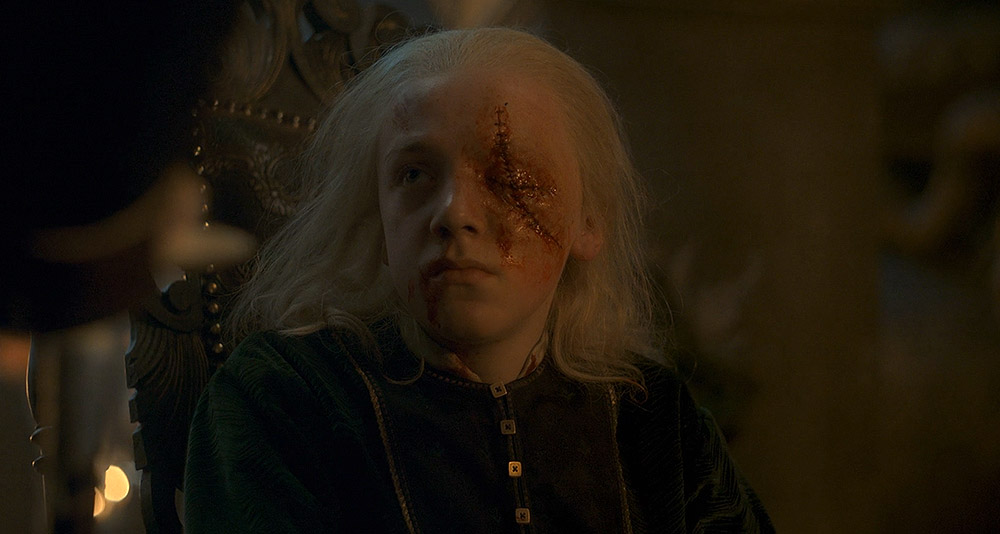 Aemond Targaryen loses an eye in House of the Dragon, HBO

Fans will simply have to roll the dice and see if the follow-up episode will manage to capitalize on all the good in this episode, or whether it will fall flat again. House of the Dragon has a notoriously bad tendency to raise audience hopes and expectations, only to under-deliver the week after. That’s got to stop, immediately. 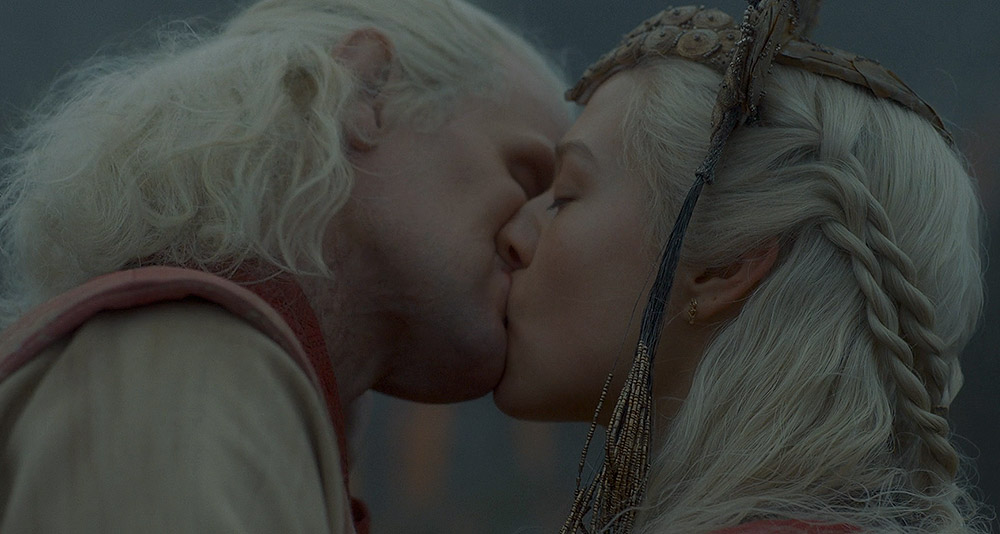 Rhaenyra and Daemon wed in House of the Dragon, HBO

Alternatively, every episode must also be judged on its own merits, and I’d be lying if I said ‘Driftmark’ wasn’t an excellent one. It still falls short of Game of Thrones-level quality, which by this point is a reality that fans of the franchise will simply have to accept. What matters is what it does with the content that is given to it.

NEXT: Woke Leftists Pounce On ‘House Of The Dragon’ To Push A Clichéd Narrative