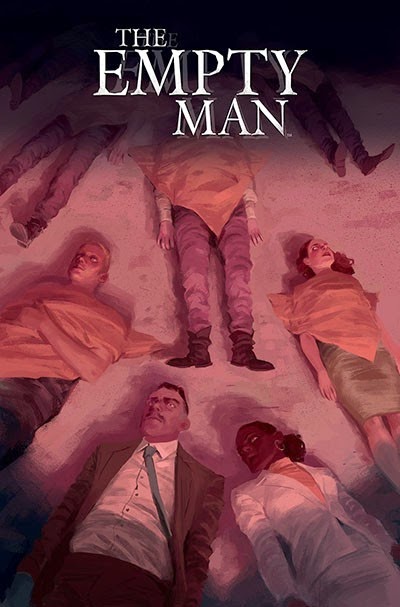 The premise of The Empty Man #1, Cullen Bunn and Vanesa R. Del Ray’s new mystery thriller is figuring out what exactly is The Empty Man.
The story starts off five years in the past in Mountain Home, Arkansas, where Abram is preaching to his small congregation in a closed down gas station. The congregation is quite small, but one distinctive feature is the fact all of the women have a veil over their heads. All but one.
After leaving the small gas station, Bunn takes us to the present in Atlanta, Georgia. But it doesn’t really feel like an urban area, but more of sleepy suburbia with single family homes and two car garages which Del Ray really perfects. A typical suburban mom has just arrived home with the groceries and is looking for the rest of her nuclear family. The scene should be a creepy buildup, but it falls flat. There are no creaky stairs or other ominous warnings, just a constant ssshhh, which appears to be insinuating a scratching sound, but doesn’t really register with the reader until the source of the sound is revealed and even then it is difficult to figure out what is happening.
Once the source is revealed, it is a gory and grotesque scene with excellent coloring, The actual drawing could be a little clearer as to what exactly is happening, but many of the panels are filled with clouds of smoke or dust that take away from the action. Although to Del Ray’s benefit this may be in hopes to inspire a sense of curiosity and mystery with the reader.
Our two main protagonists, Special Agent Jensen and her partner Walter are introduced as part of a “multiagency task force” investigating The Empty Man. Bunn does a great job as he does in the Magneto series of conveying the thoughts of Walter and the dialogue between Jensen and Walter conveys the sense the two have been on the case together for quite awhile enough to get under each other’s skin, but also enough to have the respect of the other.
After our protagonists take a tour of the crime scene, letting Del Ray and colorist Michael Garland show the true horror and outright creepiness The Empty Man can inflict, they begin a series of interviews with the locals. Sadly the interviews appear to be just page filler, as their goal of conveying the sense of terror and hopelessness around The Empty Man is given much more credence in the following pages with an actual recount of The Empty Man’s previous attacks.
The pages leading up to the ending are the most enjoyable, when Bunn introduces a nice ripple to up the level of creepiness found within the book. The ending itself is a little lackluster, but warrants a follow-up to see where Bunn and Del Ray are going to take The Empty Man.