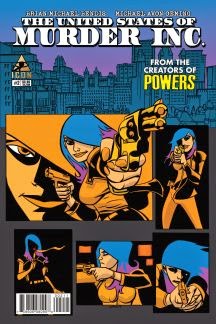 Bendis and Oeming begin The United States of Murder Inc #2 with a familiar tale right out of the annals of history, not to mention giving nods to conspiracy theorists everywhere. The opening is great not because of the history it uses, but the way the art and coloring tell the story. Taki Soma’s ability to conjure up black and white films to convey the past is excellent and does such a good job the reader hardly notices “Years Ago”. Oeming’s art excels at understating the enormity of the situation, building the reader up for an “A-Ha” moment only four pages in.
The opening pages let the reader delve deeper into this alternate Mafia-controlled universe and it doesn’t stop there. Bendis weaves an intriguing tale bringing readers deeper into the underground, going so far as to humiliate our main characters in the name of security, although the tension is broken with some humorous dialogue.
One of the highlights of the book is the interaction between Valentine and his Mom. Valentine is emotionally overwhelmed which allows the reader to really relate to him. Oeming’s artwork is masterful and fully conveys the storm brewing within Valentine. And is that storm ever released.
One of the few flaws in the book is a glaring one. The main action sequence is a tad confusing to follow. The panels have no real flow between them. One goes from a fist to the face; to our two combatants seamlessly both being knocked back by a glass door in between them, except the glass door doesn’t exist. This pattern continues when one appears to get shot in the chest only to go flying away from a kick to the gut.
The United States of Murder Inc #2 builds upon the opening issue, giving the reader a deeper look into the world Valentine Gallo and Jagger Rose inhabit with definitive emotional swings for both the reader and Valentine surrounding the relationship with his Mom. Taki Soma’s coloring shines again, although it can’t make up for an action sequence that leaves the reader scratching his head as to what actually went down.