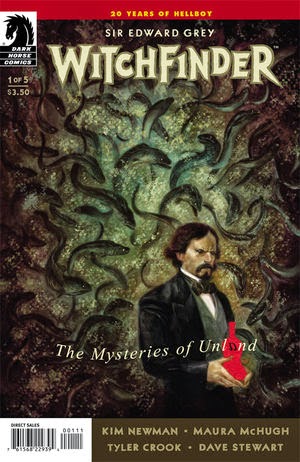 Witchfinder: Mysteries of Unland #1 is a fabulous criminal mystery with a paranormal twist. The lead character is one Sir Edward Grey, a decorated investigator with just the right touch of arrogance. Unfortunately for Sir Edward, he is assigned to investigate a hum drum routine murder in a small industrial town of Hallam, an investigation he deems far below his station.
Writers Kim Newman and Maura McHugh are able to lay out the history of the town of Hallam and its major industrial production quite nicely. They give the reader details on how the town prospers with the production of an elixir as well as many of the main attractions around the town (possible places for Sir Edmund to investigate). Accompanied with the history lesson is some very nice art work by Tyler Crook and coloring by Dave Stewart which really emphasizes the time frame. The reader knows they are in the 19th century.
The story really kicks into action once Sir Edmund arrives at the crime scene (or lack thereof). The very curious cleaned up scene of the crime leads Sir Edmund in the most patronizing of tones to question our good Constable on what he believes happens.
The two pages of the Constable relaying his story are the highlight of the book for me. It is an uproariously terrible show of police investigation filled with wicked agents, right ruffians, fire baths, and righteous cherubs. Fortunately Sir Edward Grey is not our aptly named Constable. He puts his detective skills to the test and finds a clue right under the Constable’s nose. The dialogue between the two is not only funny, but endears Sir Edmund to the reader with his superior professionalism and quick wit.
Sir Edmund’s thorough investigation is not his only skill; he also has a bag of tricks to deal with the paranormal threats and does he ever face a paranormal threat! Our hero not only has a literal bag of tricks (ok it’s really a desk), but also his own athletic and combat abilities. Crook does a great job with the action sequence showing a full range of emotions from shock and surprise to determination and weakness.
Newman and McHugh set the stage for a thrilling paranormal mystery. Our hero, Sir Edmund Grey’s endearing sophistication accompanied with his wide range of skills and tools will make solving the Mysteries of Unland an enjoyable experience.