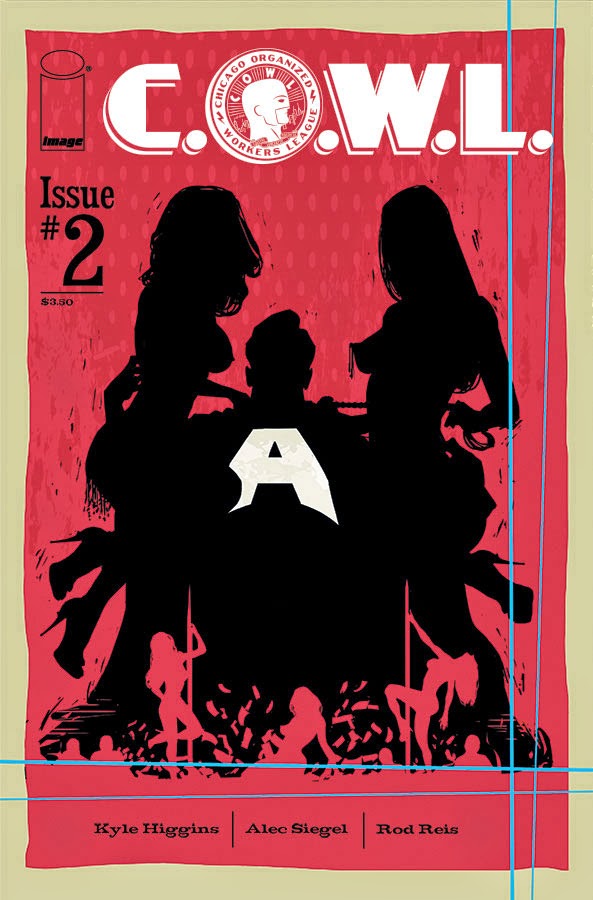 The Chicago Organized Workers League are back on the case, the case just happens to be dropping off Patrol Division Grant Marlow’s son, little Jack, off at school. It’s not as dry as it seems. Little Jack, the devil that he is, seems to relish creating drama for his Dad. It is a great sequence connecting to the reader’s own experiences as either a child or a parent and really sets the tone for the book.
Following the opening sequence, creators Kyle Higgins and Alec Siegel include a map of the city of Chicago with all of the different zones of operation for C.O.W.L. This is a nice touch that allows the reader to get a grasp of the geographical layout of the city and the distances the Worker’s League has to cover.
Rod Reis’ artwork takes over the book from here. He is able to absolutely nail the timeframes from soldier’s uniforms to mobster’s suits everything immerses you into this 1960s universe. His use of colors emphasizes a gritty, hard world full of danger.
Complementing this fantastic artwork, is a great story that bounds in with a TV commercial propagandizing the beginnings of C.O.W.L. where they fought in what appears to be World War II. The way Siegel and Higgins write it has Reis’ artwork jumping off the pages and moving onto the TV screen. The TV ad, not only gives the reader some history, but also lets us peer deeper into the political mire of the actual C.O.W.L organization and introduces us to a new character Randall and his interactions with the Grey Raven.
The story shifts to the most intriguing character (at least in this reviewer’s mind) John Pierce, and the moral dilemma he faces as he combs through the discoveries he made in C.O.W.L #1.
John Pierce isn’t the only one with internal struggles, back with the Patrol Division, Grant Marlow, is being eaten up from the inside and doubting himself. This leads to a heart-wrenching action sequence. Reis’ art and Higgins and Siegel’s writing really tug at your emotional drawstrings as you are cheering and crying at the same time.
Just when you thought you were hit with the big cliffhanger, Higgins and Siegel aren’t done. Enter John Pierce. Pierce confronts Arclight and reveals to him the revelations he discovered in Skylancer’s apartment. The palace intrigue just got even more complex.