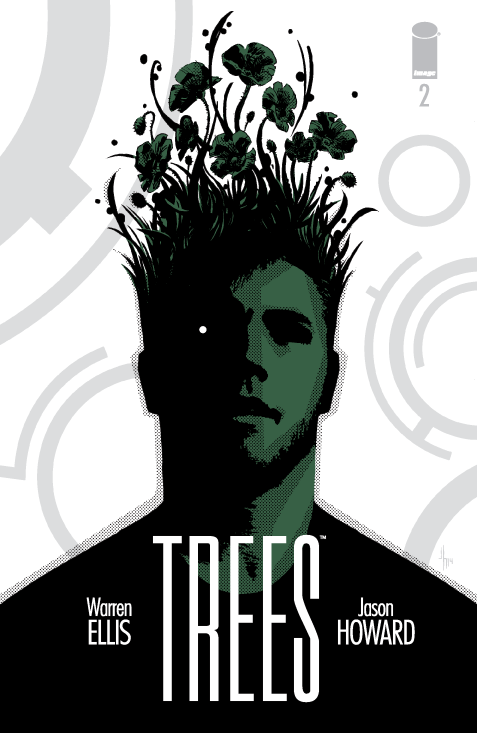 Trees #2 is lacking. It lacks action, it lacks compelling characters, even the plotline lacked in progression.
The story begins where it left off in Trees #1 at the research facility in the northern tundra. The main focus and driving point of the entire book are the strange black flowers that were growing on and around the research vehicle, Napoleon. Our researchers (who knows what they are actually researching) seem to be lacking information as well as having no clue about the local vegetation let alone whether they even checked their equipment before using it. What makes this even more infuriating is Mr. Marsh admits to having been at the facility for over two years!
One of the more forgiving and intriguing scenes is where we meet the gal who has just arrived at the station. Jason Howard does a good job of portraying the intense hangover she is suffering and the effect it is taking on her body and mind. What makes the scene so intriguing is why she is feeling this way. The reason: she drank something called akvavit in a type of initiation ceremony. (Too bad we don’t actually see the initiation.)
Warren Ellis finally takes the reader away from the station only to take them to another dialogue between a young rebel and his girlfriend in Cefalu. Their conversation is definitely more interesting than our researchers giving a little backstory and a bit of a lover’s quarrel. However the scene takes a turn for the strange, in the only action sequence when out of the blue our female attacks a lone stranger. The scene just makes one scratch their head and ask “What?”
Leaving Cefalu, Ellis introduces the reader to two new characters in Mogadishu, Somalia. Definitely the most interesting part of the book, where the title characters actually are discussed! Some much needed information on the Trees is revealed as to how they drastically affected the geographical landscape even giving certain governments more advantageous access to natural resources. This revelation by President Caleb Rahim opens up possible political intrigue. (But have to wait to see if it will unfold.)
Unfortunately, Ellis takes us back to the northern tundra, but this time Howard’s art is on display with some spectacular drawings showing off how dominant the Trees have become, making the mountains look like dwarfs in comparison. Our researchers are having a seemingly pointless conversation, until Mr. Marsh reappears and confirms exactly what the reader has already figured out and what was pretty obvious from the last issue. Ellis ends with “It Doesn’t Care” and honestly neither should anyone thinking about picking up this issue.