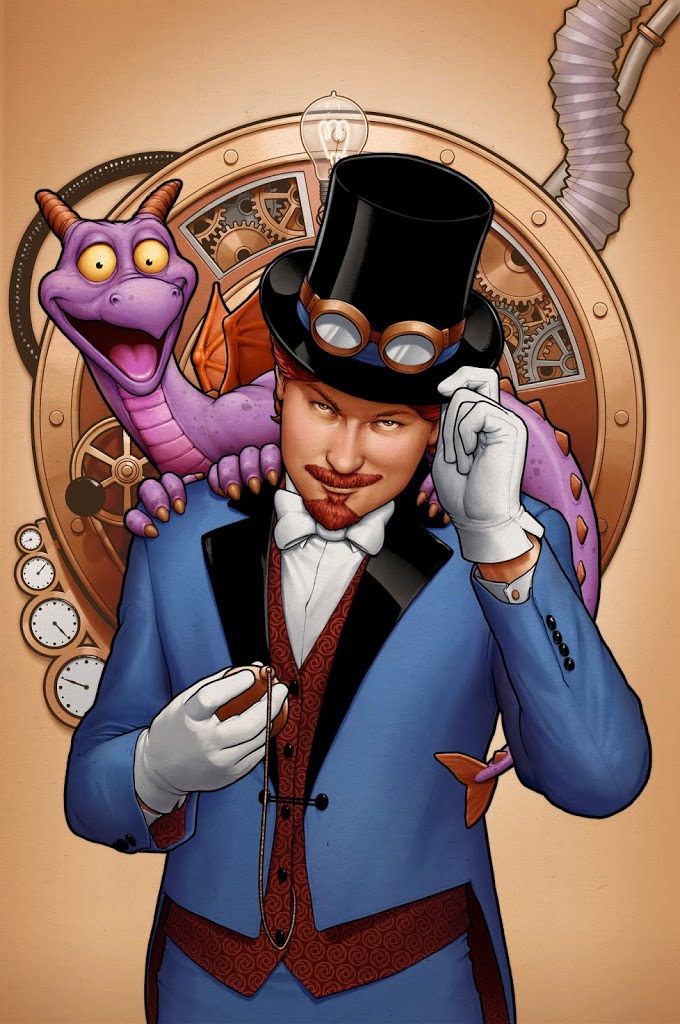 Take a journey into the imagination of Blarion Mercurial. This is the premise of Jim Zub and Filipe Andrade’s Figment series. However, it can be quite a challenge to imagine once you are an adult.
Zub begins the story over a century ago in London, England circa 1910, where the reader is introduced to Blarion Mercurial, or Blair. Blair is dressed to the nines with a dashing top hat, a fancy blue suit and a swanky bowtie. He is an up and coming scientist working on a high-budget experimental energy device, but he is no ordinary scientist. Blair thinks outside the box, he isn’t interested in ionizing atoms; he wants to harness the energy of the mind!
Unfortunately, Chairman Ilocrant, fit to fill the role of an over-aggressive disciplinarian bent on sacrificing dreams in favor of so-called reality, is giving Blair a rough go of it. Zub emphasizes Ilocrant’s overseer temperament through his demeaning lectures. Andrade reinforces Ilocrant’s personality through an apt use of his pointer finger, whether it is shoved into Blair’s chest or stuck in the air as he emphatically lectures at him.
Luckily our hero is not so deterred, and Zub uses Blair’s inner-thoughts to let the reader see what drives him as well as making a general critique of society, namely “setbacks are a sign they should settle for what they have.” Blair, on the other hand, believes they are part of “a journey to create something bigger and better.” Blair is determined and will not let one failure hold him back, although he does feel enormous pressure to succeed because failure leads to an inability to care for his downtrodden family.
One of the more iconic pieces of the book is the helmet Blair wears when conducting his experiments. It is unique, fit with steampunk goggles, and just one of many details Andrade uses to let the reader slip into the turn of the century atmosphere he has created. Colorist Jean Francois Beaulieu adds to the depth with bright colors from the light purple in Ilocrant’s suit to the masses of green, yellow, red and blue books on Blair’s shelves inside his workshop. The world is lively and reinforces Blair’s optimistic nature.
Figment #1 is a wonderful introduction into the realm of imagination, with beautiful bright colors by Beaulieu, and interesting steampunk designs from Andrade that coalesce with Zub’s story of following one’s dreams because you never know if they might just become a reality.
(Visited 172 times, 1 visits today)