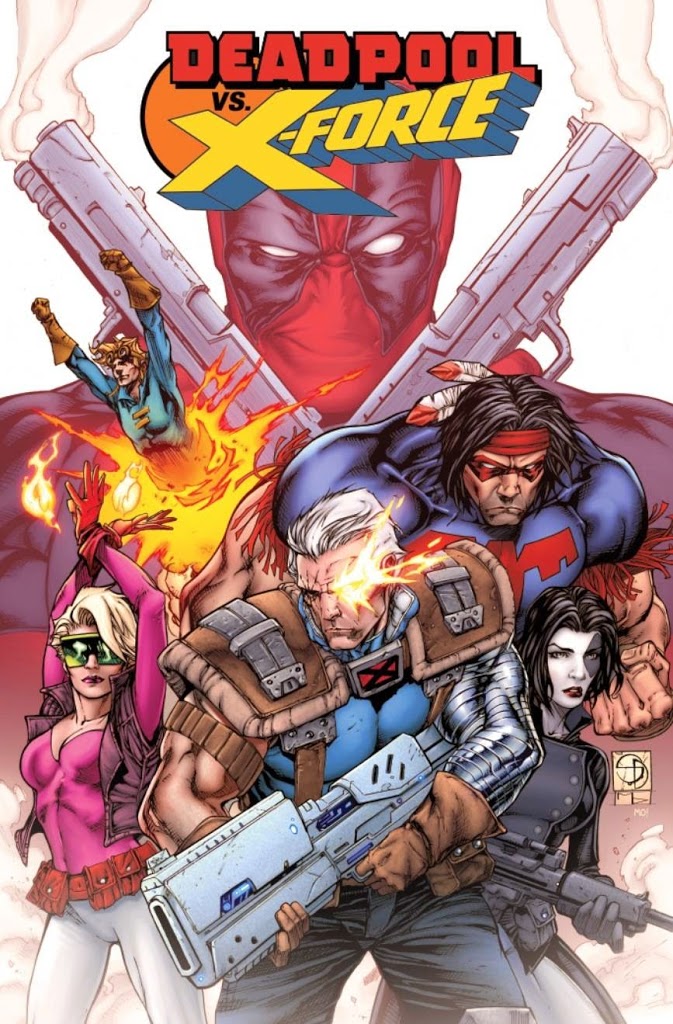 Right in time for the 4th of July, Marvel debuts Deadpool vs. X-Force #1 where the reader finds themselves in the midst of battle in Germantown, Pennsylvania right smack in the middle of the American Revolution. Fortunately for the “band of dirty, undisciplined American rebels” help is on their side!
Deadpool arises from the pile of dead rebel soldiers to unleash utter mayhem with his aptly named gun “Kingslayer.” The action sequence is rather short as British redcoats are no match for Deadpool, and his nonstop narrative of his own actions. There are a few punch lines that elicit a smile, since he has trouble determining whether the Redcoats have been shot or not due to the inherent color of their uniforms. Others fall flat especially when he makes reference to his low-hanging fruit. One thing for sure is Deadpool looks good dressed as an American patriot!
Writer Duane Swierczynski takes his leave of Deadpool to introduce Cable and the overarching plot the series aims to tackle. There is no subtlety and Swierczynski lays it all out for the reader. Cable and the X-Force must put a stop Deadpool.
Swierczynski describes the X-Force with utter simplicity describing Boom Boom as “A.K.A Tabitha Smith, Blows Stuff Up.” The characters are as simple as their descriptions and Swierczynski doesn’t go into any length at all to give any of them a personality. They are a team on a mission, and that is it. Hopefully this will change in upcoming issues and the reader will get a better grasp on who these characters are and what motivates them to blindly team up with Cable.
Swierczynski’s in your face story finds the X-Force on their way to confront Deadpool. The ensuing sequence is full of action, with walls crashing in and fireballs flying off the page. Swierczynski tees up the fireballs nicely and lets Artist Pepe Larraz hit one out of the park with America’s favorite past-time. Unfortunately the action sequence leads to Swierczynski smacking the reader in the face again with an all too easy plot development. However, he does do a good job of leaving the reader with an unexpected cliffhanger, revealing a tad bit of cunning from Deadpool.
Pepe Larraz’s artwork is fun, from dubbing Deadpool’s gun “Kingslayer” to dodging bullets and shoving the barrel of a gun down a redcoat’s throat; he embraces Wade Wilson’s persona. The scenes with Cable have a different “let’s get down to business, time to save the world vibe.” The best panels are the action sequences, whether it is Deadpool’s bullets seemingly flying off the page, or Cannonball launching towards the reader; Larraz makes the art feel 3-D.
The book has an interesting premise, which entices readers who have an historic bent although it appears only the outfits and the depiction of Cliveden Manor seem to have any semblance of historic accuracy. It will be interesting to see how Deadpool and the X-Force’s actions reshape the history of the United States.